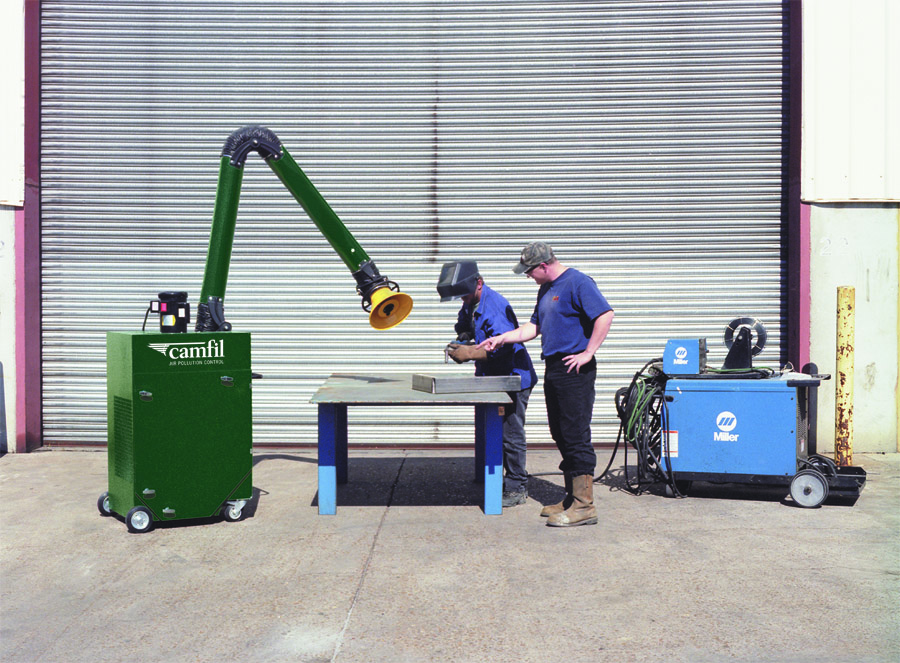 Unlike large welding production environments that use centralized fume and dust collectors, the fume extraction required for light welding is all about portability. For easy fume collection at multiple sources throughout a shop or plant, portable collectors allow for airborne particles to be captured, including weld fumes, soldering fumes, grinding dusts, and other dust and particulates.

Portability is good solution for welders that can’t be tied to a stationary unit, such as maintenance professionals and welders performing small-scale jobs. Many shops don’t have a need for larger fume collection systems, whether centralized or wall mount, or the space or budget for them.

“Our Zephyr portable dust collector is for someone welding two to 10 hours a week,” says Rick Kreczmer, Camil’s aftermarket sales director. “They have two to four hours of production time and then the filter needs to be cleaned.”

Applications for the portable fume extractor abound. And a perfect example can be found at Camfil’s own factory where they tack weld screens onto pans.

“It’s something that is not a big demand and only requires about 10 hours per week,” Kreczmer says. “It’s not part of our production welding area so we can use the Zephyr there.”

This differs from a centralized collection system that typically handles welding anywhere from eight to 24 hours a day. Here, the filter cleaning is done automatically while the welding process is in progress.

Still, source capture is the most efficient method to maintain a clean air environment. It ensures that fumes are picked up at the source and don’t get into the welder’s breathing area. The entire facility benefits, as well, when fumes are captured at their source.

Source capture is especially important when fumes contain hazardous particles such as hexavalent chrome. It also enables meeting standards put in place by regulatory groups such as OSHA.

Portable, however, doesn’t mean a lack of performance if considering higher end dust collectors. They offer all of the features that weld fume collection requires.

A portable fume collection system works by source capturing fumes in a stream of air through the hood assembly and moving the fumes through the filters that collect the particles. The collector moves the air stream at a specific velocity, measured in feet per minute (fpm), and moves a specific volume of air, measured in cubic feet per minute (cfm). For the Zephyr, air volume is 700 cfm at a rate of 830 fpm at the collection hood, which provides ample suction to draw fumes from a distance of 18 in. to 24 in. At free air (no arm and hood assembly), the unit is rated at 1,250 cfm.

“You position the hood typically 18 to 24 in. away from the area where you’re welding,” Kreczmer says. “I call this the effective capture zone. This is the distance you can have the hood away from the weld and still effectively capture the fumes.”

Like most high-end portable dust collectors, the Zephyr filtration system is sophisticated. The first of three stages is a metal filter that removes bigger particles; it is the primary spark trap, as well.

In addition to fumes, welding processes generate a lot of sparks. Portable fume collectors should incorporate spark arrestance technology that extinguishes sparks before they have a chance to reach the filter media.

The MERV (minimal efficiency reporting value) rating for the HemiPleat cartridge filter is 15. A MERV rating is the air filtration industry’s standard that’s used to classify filters based on their air cleaning efficiency with specific particle sizes.

Welding requires the use of higher efficiency filters with higher MERV ratings in order to collect dangerous particles. The initial efficiency of a MERV 15 filter is 85 percent of particles found in weld fumes between 0.3 and 1 micron in size will be collected. Over a short period of time, the filters become seasoned and the efficiency grows to more than 99.99 percent efficiency of the same size particles. 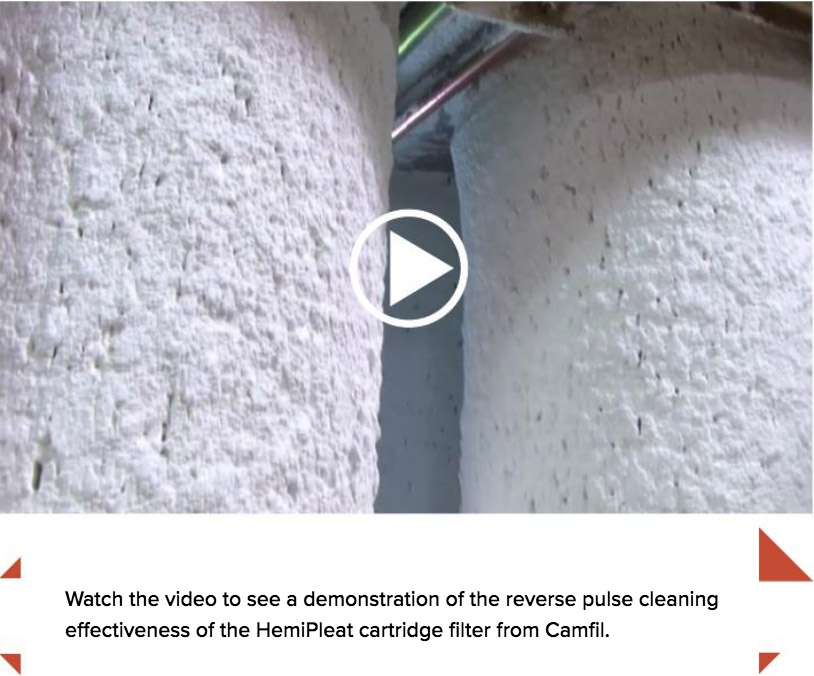 The Zephyr has an option for a HEPA filter in addition to the primary cartridge filter to filter out any remaining particulates. This filter is used with materials that produce toxic fumes such as hexavalent chromium.

The cartridge filter itself also features a flame-retardant chemical. If a spark does get onto the filter media, it will self-extinguish.

Reverse pulse cleaning is another feature found in quality portable fume collectors (see video). The cleaning extends the life of the cartridges.

“The pulse is used to remove the dust cake that builds up from the dust laden fumes,” Kreczmer says.

“The more dust that accumulates, the more the air resistance through the filter begins to build,” he continues. “If that reaches a critical point, the air flow will drop. But a blast of compressed air on the inside of the cartridge releases the dust on the outside of the cartridge and into the dust tray. Once you clean the dust cake, you can begin the process again. Compared to other collectors that have the user discard the filter, it is a huge benefit to have the intermittent pulse cleaning.”

Casters make the Zephyr easy to move around and position where needed. The portable nature of the system, however, sometimes leads to the dust collector itself to take a beating. And that’s why it was incredibly important that the unit be built to last. As an example, the casters are heavy-duty commercial grade that don’t need to be changed out every few months. Additionally, they lock to remain stationary. Handles help maneuver the unit, as well.

The Zephyr is a plug-and-play, single-phase 110-V collector. It has an adjustable, 360-degree swivel, 10-ft. arm, which allows the unit to be adjusted to fit many weld locations and sizes. With a footprint of just 24 in. by 30 in. with a height of 58 in. not including the arm, it’s easily stored when welding is not taking place.

Compared to weld guns that have fume extraction built-in, the Zephyr is easy to handle. Fume guns can be bulky and heavy, which operators tend to not like.

“Another issue with these guns, at least in previous models, is the suction from the fume extraction is so close to the weld, it blocks the welding process from the shield gases,” Kreczmer says. “That could take away from the integrity of the weld and you could end up with an inferior weld.

“Again, you want to be in the effective zone,” he adds. “You don’t want to get too close to the welding area, either. An effective zone of 18 in. to 24 in. away takes care of that.”