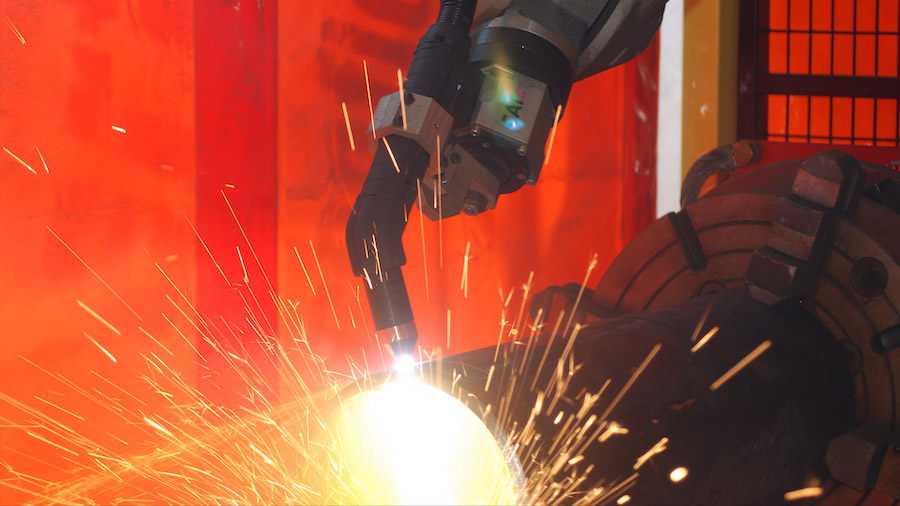 If you’ve added manufacturing robots to your facility, you are already aware of the numerous advantages they provide and the ROI. You’re also probably aware that robots can have a

downside: When it comes to programming, robots must often be offline to be updated or programmed, which means production delays and lost revenue.

Fortunately, there are ways to avoid the programming downside. One solution is to use offline robot programming (OLP) software, which allows you to generate robotic code and then upload it to the robots without any downtime. As with any technology, however, it’s important to choose the right OLP solution.

The advantages OLP provides can only be realized if and when business owners are aware of it and how it works. Fortunately, the concept behind OLP is fairly straightforward – OLP software works with 3-D CAD models to define tasks such as path planning, programming and debugging. Once the robotic code is generated, it’s then uploaded to the robot.

One of the challenges with OLP is the misconception that the software is difficult to use. This misconception, however, is most likely based on earlier versions that are a far cry from the software of today. Over the past four to five years, OLP has evolved significantly and has become more user friendly and intuitive.

OLP works in simulation, using a 3-D CAD model of the robot workcell. All of the programming is completed in the virtual space using the OEM’s software or third-party software, both of which allow for troubleshooting and problem solving before the robot has been installed. Programs can be created, adjusted and debugged in the simulation, ensuring that the robot will perform as required once installed. OLP is also helpful in ensuring the right size robot is selected for the application, allowing first-time buyers to be confident they have the right robot for the parts.

Another benefit is that manufacturers can program all of the robot’s tasks even as they finish building the automation, resulting in a plug-and-play installation that can save days or weeks in the final design installation. Any new programming can be done offline and uploaded to the robot without the need for the robot to be offline to be reprogrammed.

Whether integrating a new robot system or redeploying an existing one to new tasks, OLP allows for peak equipment efficiency optimization with little downtime and fewer unanticipated issues.

1. Quicker robot integration: Whether a new installation or a redeployment, time is always an essential factor. By

creating, adjusting and testing the programming in a virtual environment, the robot is ready to operate when installed, saving days or weeks compared to a teach pendant.

2. No downtime: With teach pendant programming, the robot must be in teach mode. OLP software can upload the programming to a robot while it’s operating, which means less manufacturing delays.

3. Safety: Whether faced with a safety concern due to robot configuration or restricted access to the robot due to work-from-home protocols, OLP can be completed from a laptop in a safe location and uploaded to the robot without the need to access a teach pendant. In addition, collision avoidance, robot configuration and path planning, as well as robot path and conveyor tracking can all be programmed and tested in simulation, thereby avoiding unanticipated delays at installation time because no one remembered to consider the overhead beam adjacent to the robot.

4. Quick changeovers: OLP software can program a robot for part B, while the robot is completing the part A run. As soon as part A is complete, the part B programming can be uploaded and the task begins – all without turning off the robot. OLP allows for quicker cycle times, allowing for a higher mix of jobs with faster transitions.

5. Universal application: Few manufacturing operations use only one brand of robot or other equipment. For most, the robot that accomplishes the task at the best price is the one that is installed, which leads to a variety of robots that need to be programmed. True OLP software should be “robot agnostic,” meaning it has the ability to communicate across many platforms. Even if redeploying an older robot, OLP software should be able to interface with it.

6. Test new configurations: Adding a robot into a manufacturing operation is a significant capital investment. For those using Hypertherm’s Robotmaster OLP software, a simple user interface allows the user to design and test various configurations in 3-D simulation before the robot is installed. Users can anticipate, identify and solve issues before the robot arrives.

7. Ease of use: The right OLP requires process knowledge, but it does not require advanced programming or robotics expertise. OLP software is built around the user, rather than strictly the robot requirements, and is designed to deliver a clean and enjoyable user experience. In addition, because of the ability to interface with various brands of robots, programmers do not need to learn proprietary OEM interfaces for each OEM robot brand.

A very effective way to inform your decision on whether OLP is right for you is to engage your community of programmers, shop owners, integrators and other manufacturers to discover why they use the software they do. Most are happy to share their experiences and what it is about the solution they have that does or doesn’t work for them.

Look for an OLP software provider with deep process knowledge in solving robot programming challenges, such as welding, deburring, additive manufacturing, cutting and trimming, dispensing and other applications.

With OLP software, one size does not fit all. If you are a manufacturer that uses only one brand of robot, you may not need professional-grade OLP software. An OEM’s OLP software might be a sufficient solution for your operation.

Ask for a test drive of the software you are considering to test ease of use and ensure it’s a good fit for your operation. Try out the support line, too. The solution should tick all the boxes for the operations you run in your facility, but it should also tick possible future boxes as you expand.

Ensure you understand the expected ROI, maintenance costs and costs for add-on processes, such as welding. Normally, training costs are a consideration in calculating ROI, but with today’s OLP software, the simplicity has reduced those dramatically.

OLP solutions are not for everyone, so it’s important to work with a reputable software integrator who can help you make the best decisions and provide you with any assistance you need along the way.