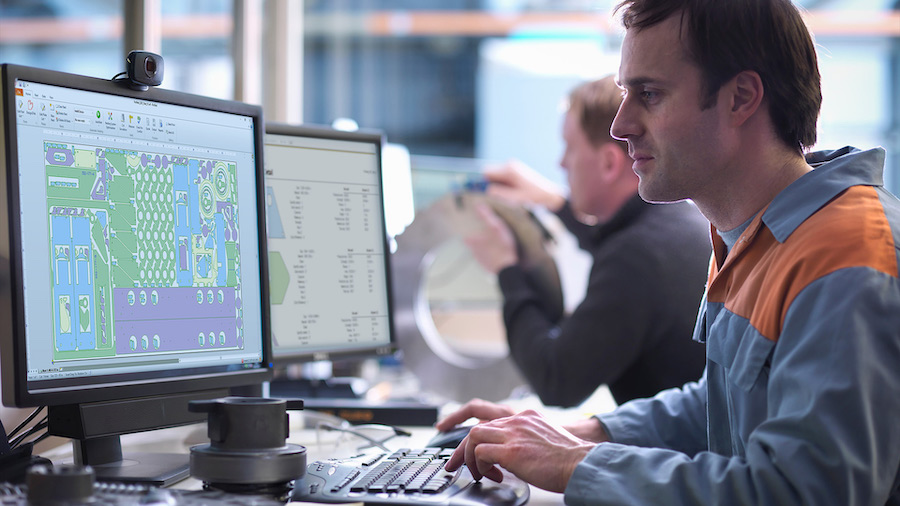 Perhaps you know Newfoundland as the only place in North America were the Vikings (possibly famed Norse explorer Leif Erikson) established a settlement. Some know this eastern-most

Canadian province as the best place in the world to see icebergs while others recognize it as home to the oldest city (St. Johns) in North America. But when it comes to industry, Newfoundland is known as the most geologically diverse province in Canada, rich in minerals, including iron ore and precious metals like tungsten. Fittingly, mining has been a major industry in Newfoundland dating back to the 1860s.

In 1993, Dennis Langdon established Resistant Material & Supply Co. Ltd. (RMS) in Wabush on the western border of Newfoundland to serve the local mining companies by making parts for mining equipment prone to wear. Since then, RMS has evolved into a “one stop shop for steel fabrication,” says Leo Dillon, shop production coordinator for RMS.

“In house,” Dillon begins, “we fabricate everything needed for ore material handling, like chutes, pumps and feed boxes as well as any configuration of piping or ducting required.”

RMS also specializes in structural work, such as platforms, handrails and beam. The company’s primary customers are the local iron ore mines that dot the Labrador and Quebec border, but the team at RMS also garners business from hydroelectric projects in the region. To round things out, the company is also available for custom repairs and builds for various local commercial operations. Utilizing the right software with high-speed plasma cutting technology, RMS is able to handle a variety of jobs with great efficiency.

Dillon says that being an isolated northern community, RMS has traditionally relied on “old school methods and worker skill.

“We used hand-held plasma and track cutting technology,” he says of the company’s early days, “and repetitive jobs relied on the skill and abilities of the workers to keep things efficient and profitable.”

And while Dillon says RMS has excellent employees, like many other fabricators, the company struggles with high turnover. Piling onto that challenge is the lack of skilled workers in the market, making the situation even more complex. To overcome these obstacles, RMS invested in Hypertherm’s XPR300, a high-speed, automated plasma cutter equipped with ProNest advanced nesting software.

“The high-speed plasma cutter has allowed us to have more consistent quality and efficiency,” Dillon says, “and that’s been good for us as well as our customers.”

A Google search for “high-speed plasma cutter” finds Hypertherm prevalent on the first page of results, which comes as no surprise. The company has made a reputation for itself as a go-to provider of quality and reliable cutting systems, particularly with the XPR300, which is touted as the “most significant advance in mechanized plasma cutting technology, ever.”

Hypertherm further describes it as the next-generation system that redefines what plasma can do through expanding capabilities and opportunities in a way that wasn’t previously possible.

High-speed plasma cutting technology is the muscle behind the fabricating process, but it needs a brain to tell it what to do. ProNest is that brain. Users say it’s a high-yield solution for

Unlike other nesting software on the market, ProNest offers features beyond nesting, including work order management tools, the ability to quote jobs and machine monitoring. With its intuitive screens it’s easy to learn how to use.

“The learning curve actually hasn’t been that bad,” Dillon says. “Some entry-level CAD and basic computer skills allow you to hit the ground running. We were literally using it the same day as it was installed and have been finding more ways it can help us all the time.”

Prior to utilizing Hypertherm technologies, Dillon says that in the company’s “old school” ways, layouts were done by hand on sheet metal to make wraparounds for the welders to use in various fittings. These templates took up a lot of space, were time-consuming to make and required an abundance of expertise.

RMS is a multi-purpose shop, sometimes working with sheet metal and at other times with pipes. Those two worlds collide in some projects that require both material types, including some mining equipment. An example is a “tailings” pump box that RMS fabricates. Once the ore has been extracted from material, what’s left over is a byproduct called tailings. RMS made a custom fitting for a local iron ore mining operation’s tailings pump box, which turned out to be quite a complex fitting.

Dillon says he was having the “hardest time wrapping my head around” getting a reducer coping to go into an intersection of a lateral coping on the box. Fortunately, Hypertherm has software for that, too.

Design2Fab sheet metal layout software makes it easy to create everything from HVAC ducts to mechanical fitting layouts. The software is engineered to reduce the time it takes to develop and lay out flat patterns. A complex fitting that takes hours to lay out manually, Design2Fab can do it in minutes, as Dillon says he and his team quickly discovered.

“The program gave us the base layout for the reducer into the pipe in no time flat,” he says, “and from that, we fit up the lateral coping. It made the job a lot easier.”