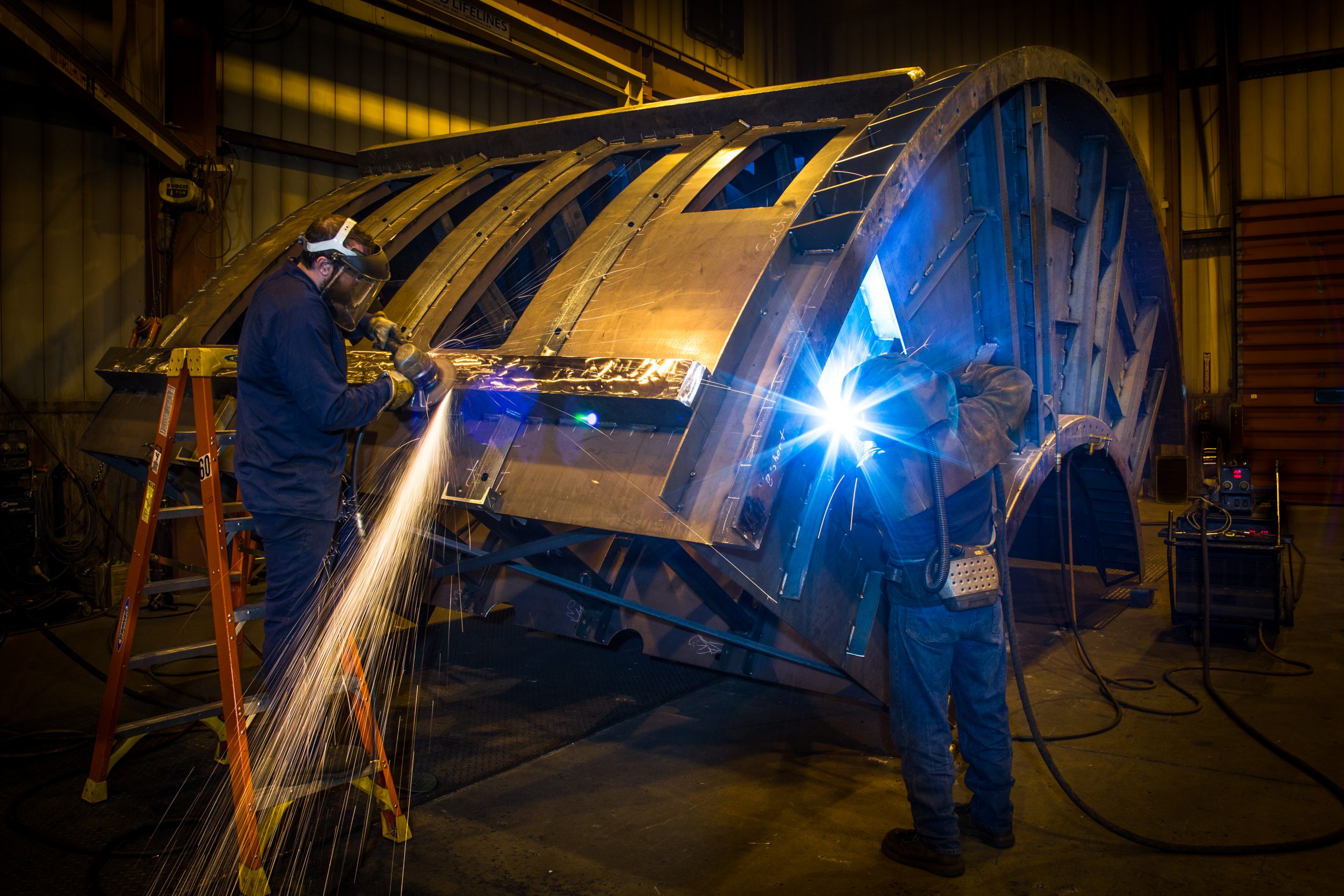 For more than 60 years, General Kinematics, a manufacturer of vibrating equipment for processing bulk materials, has been providing consistent, on-time and innovative

solutions to its customers. The company prides itself on offering rugged, cutting-edge equipment to manage difficult-to-process materials across the mining, resource recovery, bulk processing and foundry industries.

A reputation for design leadership and creating tailored technical advancements sets the company apart from the competition, as does its commitment to providing excellent service.

“Between costs and repairs and lost labor from the welders having issues that stopped their progress, we estimated around $45,000 a year in costs from these issues,” says Jason Jerik, plant manager at General Kinematics.

Problems with the water-cooled MIG welding guns at General Kinematics were at the heart of its need for a new solution.

“The guns were definitely our main issue as far as maintenance was concerned,” says Joel Jacobson, General Kinematics’ director of manufacturing. “It was tough to keep up with the demands of the hoses breaking, wires breaking internally in the guns, tips burning out, issues with liners and so on.”

Jerik adds that the last time they calculated the issues, from a dollar standpoint, “it translated to about five to seven hours a week in lost time, just with liner issues. It was that frequent.”

With a goal to gain back that lost time, Schuette and the team at General Kinematics took a slow and thorough approach to testing the Bernard air-cooled MIG welding guns and consumables, making sure the products performed as expected. They worked first with some sample guns in standard sizes and leads and had different welders try them for a week each.

“We would test a week with one fitter,” Jacobson says, “a week with one welder, and then we’d move them around to see what kind of acceptance we would get with them.”

General Kinematics welds a variety of materials, from A-36 steel to AR-500 plate in thicknesses up to 8 in. and on a variety of joints. Welding operators also weld large and small weldments and use different welding wire diameters. Knowing this, the guns and consumables needed to be versatile enough to manage these jobs and produce the quality needed to adhere to the American Welding Society (AWS) D.1.1 Structural Welding – Steel code. They also had to be the right equipment for the company’s welding operators.

Jacobson and Jerik regularly met with the welding operators to request feedback during the trial.

According to Jerik, welding operators saw noticeably less consumable consumption. However, they wanted to change the angle on the neck of guns to gain better access on

difficult joint configurations. They worked back and forth with Bernard to determine a different angle of the neck that suited their needs.

“We wanted to do a thorough run of testing and vetting to decide whether it was the right product for us,” Jerik says. “We needed to get that buy-in from our welding operators.”

Ensuring that welding operators liked the MIG welding guns and consumables was a critical part of the testing General Kinematics conducted. The company has a culture of empowerment and wanted its welding operators to be heard and to contribute their opinions.

“We believe that it’s important to get our welders involved early in the process,” Jacobson says. “Not everyone likes change, but getting them involved in testing up front can help show the long-term benefits.”

“I’m huge on that,” Jerik adds. “I’d rather not force or push a change on our team. I’d rather them accept it and make it their own.”

After eight months of testing, processing feedback and adjusting, General Kinematics made the decision to convert to the Bernard BTB air-cooled MIG guns and AccuLock S consumables.

General Kinematics invested in 400-amp BTB air-cooled MIG guns for its 40 welding operators as well as several 450-amp Bernard water-cooled guns with the same AccuLock S consumables. Bernard also built the company a special neck for its water-cooled guns to provide better ergonomic access to typical weld joints. These guns are the first of their kind to be configured with the AccuLock S consumables.

So, what finally sold General Kinematics on the Bernard products? In short, durability and performance.

The reduction in gun maintenance was key. Strug no longer has to contend with leaking water-cooled guns or liner issues. Plus, the new guns and consumables are less frustrating for the welding operators, who can now spend more time being productive.

“We have a whole lot fewer repairs,” Strug says. “Before, it was constant – every month, I’d have seven guns that I’d have to send out to get repaired, or I had to repair them myself. Today, though, it’s a huge difference in quality – night and day.”

The durability and performance result from a combination of the rugged construction of the BTB air-cooled MIG guns, which were configured according to the handle, neck, trigger and cables the company needed as well as the liner that is part of the AccuLock S consumables system.

Bernard designed the liner in the system for error-proof replacement by eliminating the need to measure it prior to installation. Instead of the liner loading from the back, like many competitive guns, the AccuLock S liner loads in the neck at the front of the gun and then locks in place so it can be trimmed flush with the power pin. This prevents the liner from being trimmed too short or too long.

“They last a lot longer and I definitely like the quality of them,” Strug says.

According to Jacobson, another selling point was that AccuLock S contact tips run significantly cooler than the company’s previous ones, so there is less consumption and downtime for changeover.

That’s due to the design of the tip and gas diffuser. Sixty percent of the welding contact tip is buried in the gas diffuser, which protects it from heat damage, and the shielding gas also cools the contact tip tail as it flows through the gun. AccuLock S consumables have a tapered design that locks the tip, gas diffuser and nozzle tightly together to further reduce electrical resistance and lower heat buildup.

Jacobson likes the ability to reduce costs by having equipment that lasts longer. And both the air- and water-cooled MIG welding guns use the same AccuLock S consumables, which helps reduce inventory management.

The welding operators like that the guns and consumables run cooler and help reduce spatter, so there is less cleanup.

For General Kinematics, making the change to the Bernard BTB guns and AccuLock S consumables is just another way the company commits itself to quality. But there has been more to the conversion than that.

General Kinematics was able to gain a return on investment in approximately 12 to 14 months. And while there are still labor and equipment costs for gun and consumable maintenance, the conversion has eliminated the $45,000 in extra spending to address the previous issues with the water-cooled guns.

“When it comes down to it,” he says, “do these products make their job easier? Do they make them more productive?”

The answer to both is yes.