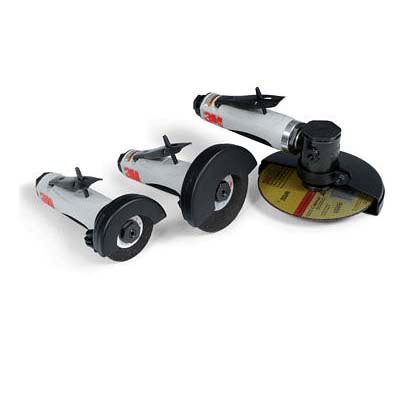 Job shops are faced with many types of work on a daily basis, and power tools manufacturers want to make sure that they have the right tool for each of these tasks. As a result, they’re constantly coming up with new and innovative tools to help operators work harder and more efficiently, yet without requiring more effort. The tools in this article are no exception to this rule. And, in fact, you might be surprised by some of them.

When it comes to 3M, the first thing in most people’s minds might not be power tools, as the company initially made its name in abrasives and other products. However, 3M has been in the power tools game for about seven years now, and truly, considering the diversity of their portfolio, power tools isn’t really that huge of a leap. In a sense, they approach the tool business from the opposite end of the telescope: they’re abrasive experts who make tools to get the best out of the abrasives.

“We got into the power tools business in 2007 as an extension, [in order to provide] ourselves the ability to sell more of a system, [rather] than just a single abrasive product to our customers,” says Matt King, a technical service manager for 3M. “We have a full line of power tools for the industrial user, and it’s a fairly extensive line. It includes random orbital sanders, metalworking right angle and straight grinders, inline sanders, portable sanders and buffers, cut-off wheel tools and portable belts for tools.”

King goes on to define what he calls the industrial user. “An industrial user would be anybody that’s producing commercially-sold parts, for example. [Anyone doing] deburring, blending, cleaning, finishing or polishing a substrate. Those substrates could include anything from mild steel, stainless steel, aluminum, titanium, up to and including composites. Really, it’s anybody that’s working on a surface.”

Clearly, this definition includes the job shop user, and when it comes to power tools, 3M is selling in a very competitive marketplace… “Obviously, customers have choices,” King comments. “They have choices in what kind of abrasives they buy, what kind of accessories they buy and what kind of power tools they buy. Rather than approaching the customer with an abrasive product, which we did for almost 100 years prior to having power tools in our line, we found it more necessary to design a power tool that would optimize the performance of the abrasive.

“When we’re selling to a small fab shop, we’re not bringing in an abrasive product and saying, ‘Oh, I see you’re using Product X. I have my product that does the same thing. Let me test my product.’ We’re bringing in a system, so the power tool really plays an integral part of that system, that system being the power tool, the abrasive product and the accessory, the accessory being a backup pad, or a mandrel, etc.” 3M designs several of their technologies into their tools that provide customers with better ergonomics, as well as speed-to-torque-to-horsepower ratios that optimize the tool’s performance with the abrasive product.

“You’re not taking a non-woven product, for example, and running it on a high-speed tool and not getting the benefit of what a non-woven product provides, which is consistent finish and long life,” says King. “You’re running it at 12,000 RPM and getting that performance out of the abrasive, rather than beating the abrasive up, so to speak.” On the ergonomics, he also provides the example of their right angle disc sander.

“[When using one], the operator has a tendency to twist their wrist, if you will, to increase that angle [to the work surface],” he says. “We built that angle into the head, so we’ve got a 97-degree head, so the operator doesn’t have to strain their wrist to increase the angle of the task to the workpiece. That’s been a huge thing for us. I think that’s been one of the things that customers react to the most. They don’t see it until they start using it, and they recognize, ‘Wow! I don’t have to do what I used to do.’”

Another 3M-exclusive benefit that they build into their power tools is their 3M Greptile Gripping Material, which reduces vibration and provides the operator with better control of the tool, without requiring an excessively tight grip. “The Gripping Material actually serves as an interface between the tool and the palm that allows the operator to not have to grab the tool real hard to control it, so to speak.”

King says that the response to their power tools has been good. “One of the key responses we’ve gotten from our market is that they didn’t recognize or know that they might be using the abrasive products or consumables in a way that wasn’t providing the greatest performance or longest life out of the product. I think that initially it was a shock to the industry. Now I think we’re starting to be seen more as a leader in power tools in the industry.”

Today, 3M offers a broad line of power tools, and for metalworking, this includes disc sanders, die grinders and cut-off wheel tools, all of which are designed to work with 3M abrasives and include the company’s Greptile Gripping Material. “When we entered the power tools market, it wasn’t about going and taking a share,” says King. “It was about making the experience of using 3M abrasives more enjoyable and better for our customers.

“We’ve got 100 years of experience in selling abrasives to the industrial marketplace. From the insights that we’ve gathered, the knowledge we’ve obtained over the years of what customers have to deal with when they’re sanding or grinding, we’ve been able to build some of those things into our tools that, hopefully, make the experience a little bit more enjoyable, or less abusive, if you will, to the operator.”

In contrast to 3M, Hougen Manufacturing has been known for and creating power tools for over 50 years. And this year, the company introduced two new electro-hydraulic hole punchers featuring a power retractable punch, Hougen-Ogura Models 75002.5PR and 75004PR. “They are unique from other hole punches in the fact that they’re self-contained tools that only require an electrical plug-in,” says Greg Londrigan, Hougen’s marketing coordinator. “There are no external hydraulic power packs or hydraulic hoses to contend with. They also feature a Power Retractable reverse punch function to reverse the punch out of the material. A punch sticking in the material is a common problem when the punch and die begins to wear, or on harder or more elastic materials that can ‘grab’ the punch when it tries to return to the home position, so this feature helps to increase productivity.”

The new hole punchers are designed to punch round and oblong holes in angle iron, flat stock, channel and h-steel he says. “Punching holes is quicker than drilling a hole. These new models are lightweight and can easily be carried to the job area to punch holes or be used with a work stand on a bench.” According to the company, the new models can punch holes in steel in as little as 2.3 seconds. Says Hougen, “The 75002.PR provides 10.1 tons of punching pressure to punch round holes up to 3/4 in. in diameter through 1/4-in. material, and oblong holes up to 9/16 in. by 13/16 in. The 75004PR has an increased punch pressure of 16.9 tons and can punch round and oblong holes in materials up to 3/8-in. thick.” Londrigan says that both models are lightweight at 25 lbs., easy to operate and can jog down the punch to line up the hole. They can also share punches and dies, and both come with one punch and die, a work stand and a foot switch controller.