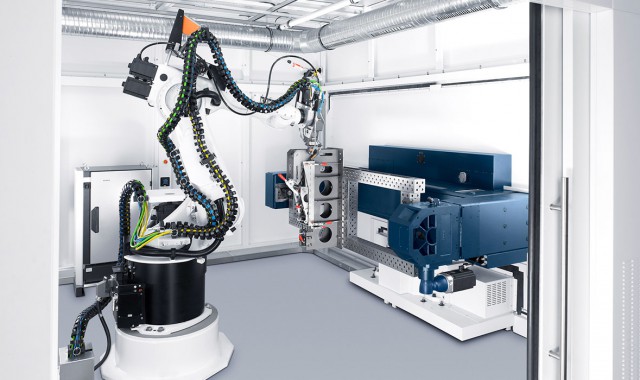 This past November, Fabtech 2014 didn’t bring the sunny skies normally associated with its host city, “Hotlanta.” Unfortunately, the southern city found itself within reach of an early winter blast that had affected most of the nation. From day one of Fabtech in Atlanta until the crowds dispersed, the temperature hovered around 50 degrees. Hotlanta just couldn’t deliver the weather Fabtech attendees had hoped for.

What Fabtech Atlanta 2014 did deliver, however, was record-breaking attendance. Despite the arctic blast, the fabricating industry’s biggest annual event brought in more than 30,250 attendees from more than 70 countries. And with more than 90 percent of those attendees hailing from the United States, they got the first chance to see Trumpf’s TruLaser Robot 5020, a turnkey laser welding cell, which had previously made its global debut across the pond.

As was the case in Europe when the welding cell first debuted, at Fabtech Atlanta, attendees witnessed new and innovative products at every turn. In both locations, the TruLaser Robot 5020 was no exception. And its unique laser networking ability was part of the reason why. The setup at Fabtech, for example, had the TruLaser Robot 5020 sharing a single 4-kW solid-state TruDisk laser with a 2-D laser cutting machine, demonstrating how a fabricator could purchase a single laser source and share it across multiple operations. The demo was eye-opening for fabricators who might not have felt they had enough work to comfortably justify the investment. 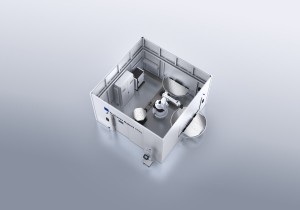 At Fabtech, attendees can see laser cutting equipment lined up as long as a football field. The permutations are vast, and the capabilities are broad. To understand how Trumpf got to the point of producing its TruLaser Robot 5020, however, it’s important to understand how the solid-state laser got to be where it is today.

With so many laser cutting tools represented at Fabtech, it’s clear to see that the laser as a machine tool has evolved to become the de-facto option for fast, accurate and flexible cutting of sheet metal parts.

As a matter of fact, no other technology can quite match its performance, considering its exceptional speeds, capacity for fine contouring and relatively low cost of operation.

Also notable at Fabtech is the fact that, since its acceptance in the sheet metal industry, laser technology has been anything but static. Over the years, the CO2 laser has evolved in power, efficiency and capability, providing the user a greater range of flexibility and most importantly, the ability to make a better part – ideally at a fraction of the cost.

The advent of the solid-state laser, however, further revolutionized the industry. Unlike CO2 lasers, solid-state lasers use a Laser Active Material (LAM) that is in solid form (e.g., YAG or quartz crystal). This enables the laser to produce light in such a way that eliminates the need for maintenance within the resonator or along the beam path. It also decreases the operational costs of the system.

Furthermore, solid-state achieves higher energy efficiency and greater beam density than its CO2 laser counterpart. This results in significantly higher cutting speeds in the thinner range of material. These improvements, combined with the ability to cut a more diverse range of materials, including reflective non-ferrous materials such as copper and brass, has seen the laser move from a “would like to have” to a “must have” for sheet metal fabricators.

When the laser was first considered a stable and workable device in the 1960s, it was a “solution looking for a problem.”

Now that it is well accepted for cutting sheet metal, developments in solid-state laser technology have made it possible to use the laser for joining metals. This is growing in popularity due to the speeds achievable, the strength of the finished product, the flexibility of the joining methods, the material types able to be joined and – perhaps most interestingly – the reduction or elimination of downstream processes while simultaneously improving the cosmetic quality of the product.

The lack of grinding or finishing requirements and presence of little to no distortion of the material due to minimal heat introduction from laser processing are examples of this. The objectives are similar to laser cutting: make a better part and spend less money doing it.

With widespread expertise in industrial applications for laser processing, Trumpf offers multiple turnkey solutions for laser welding: Lasers ideally suited for mass production (with either a CO2 or solid-state laser resonator) or as a highly flexible tool ideally suited for the sheet metal industry, such as the TruLaser Robot 5020 with a solid-state TruDisk laser that was introduced at Fabtech Atlanta.

Trumpf introduced its TruLaser Robot 5020 in a production cell concept. This concept was unique, demonstrating the TruLaser Robot’s ability to share the laser beam source located on a laser cutting machine (in this case, a TruLaser 2030 fiber).

This concept, called laser networking, provides fabricators the advantage of using a single laser for two machines, which substantially reduces the overall investment cost of the system and makes a transition from conventional welding to laser welding a monetarily feasible and practical solution. This is important because at this point, it may be difficult for people in the sheet metal industry to justify the cost of the laser welding cell complete with a laser resonator dedicated to the operation.

At Fabtech Atlanta, attendees learned that Trumpf can provide a secondary output (up to four outputs, based on the machine) with any of the 2-D solid-state machines in its portfolio – from the TruLaser 1000 fiber series through the TruLaser 5000 fiber series. However, since the beam can only be shared, not split, the most practical use is for fabricators who find themselves at the lower range of productivity, meaning the initial motivating factor for purchasing a laser cutting machine wasn’t mass productivity.

Trumpf is unique in its ability to optimize the delivery of the beam based on whether the laser cutting machine (primary operation) or laser welding system (secondary operation) requires the beam for its next operation. This will not yield 100 percent beam utilization, but it brings fabricators much closer to that goal.

The TruLaser Robot 5020 is very much a turnkey device, containing all the necessary components for laser welding with additional options available for greater flexibility. The positioning for Trumpf’s unique variable focus optic, which allows for both deep penetration welding and heat conduction welding all in one tool, is done by a programmable ultra-high-precision 6-axis industrial robot.

The robot positioning and all the laser commands can be defined either via TruTops Cell offline programming or directly at the machine. To increase overall consistency while moving from part to part, an optical technology called “TeachLine” is also available, allowing the system to automatically scan the part in its fixture and make any necessary corrections to its travel path.

Finally, a customer is able to forego one of the basic benefits of laser welding – the lack of a need for filler material. Therefore, when necessary, fabricators can add a wire feed to accommodate certain processes. This combined with the standard rotary-tilt table and semi-automatic rotary table allow for easy setup, high productivity and is a simple, cost-effective and easy entrance into laser welding.

So although November in Atlanta might not have been balmy, the time spent at Fabtech was enlightening. And for fabricators looking to enter the laser welding arena, the Trumpf TruLaser Robot 5020 definitely added to the positive experience.