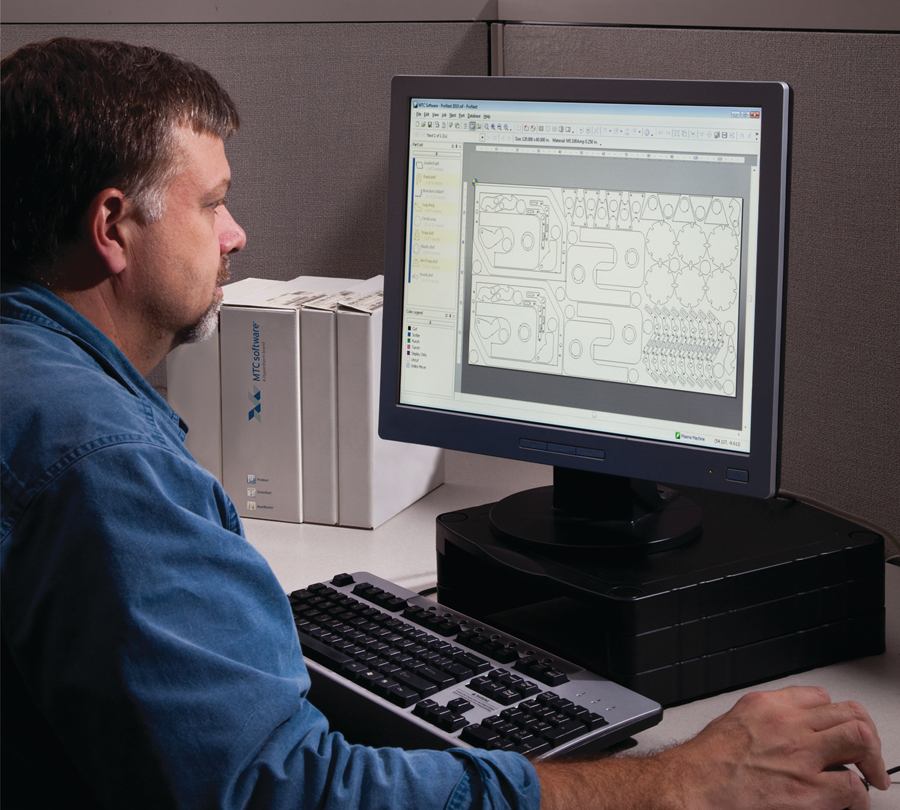 In a past issue of FAB Shop Magazine Direct, Shop Floor Laser’s sister publication, a regional sales manager at Metamation let readers in on an innovative method for nesting parts on a fiber laser. Because of the number of fabricators flocking to fiber technology, we consider it essential information that we wouldn’t want our readers to miss out on.

The original article, “Optimizing nests for a fiber laser,” was presented as a Q&A between Colin Carlu Olexa, the associate editor at FAB Shop Magazine Direct, and Metamation. During that Q&A, Metamation gave the full story on how optimizing nests for a fiber laser can help fabricators get more speed out of their machines. Here are some of the highlights:
“Stitch cutting is a sequenced cutting technique, as opposed to a nesting technique,” the regional sales manager explained. “But you would need to set up your nest to allow yourself to do the stitch cutting, and it’s going to work best with parts that are rectangular.”

To get an idea of how stitch cutting could work, readers were asked to picture a simple square – one that measures 10 in. by 10 in. that you plan to make 100 of. He went on to say that a fiber laser user would copy the part out in an array that is evenly spaced, 10 parts high and 10 parts wide. Essentially, he described a big grid of parts that when copied out would be cut completely across in one direction and then cut across on each vertical and horizontal.

“So you would be cutting all the horizontal lines, each part in a row at one time, then come down and cut the next one on a line and then repeat,” he said. “You’re cutting out, in a line, all the parts with each cut, and then you come back and do the vertical. The advantage is that it’s quick. It’s a fast process.”
To execute on the method of stitch cutting, Metamation stressed to readers the importance of having their algorithms and their etching parameters set up so that the parts are in orderly grids, as opposed to what he described as a “jigsaw-style mess.”

Metamation continued by saying that “if you’re going to optimize a nest for a fiber laser, you might want to keep your nest simpler, so that you can use that type of technique. When a nest looks like a jigsaw puzzle put together, it’d be difficult to do that technique. It wouldn’t be fast, and you’d basically be cutting each part out individually, as opposed to all the verticals or horizontals in one swoop.”
As was initially explained, stitch cutting is more geared for rectangular parts as opposed to parts with a complex contour, for example. Using a fiber laser for these types of parts, however, can still give fabricators a leg up.

“With a more complex part, it might just be geared more toward a narrower beam width, since fiber lasers have the ability to get your parts closer together,” he explained. “That would be one of differences between a fiber laser and a CO2 laser – you can nest your parts tighter and your parameters can be set up accordingly.”

To achieve these cutting advantages, Metamation’s MetaCAM version 8 was mentioned, which has features that are designed with fiber lasers in mind. The software also includes the ability to do stitch cutting and comes with algorithms that can control the gap between parts.
Whether fabricators are using a fiber laser or a CO2 laser, Metamation doesn’t see a drastic difference between the two. Depending on the material, fiber was cited as being able to cut closer and faster as well as being able to give a nicer edge. But in the end, it’s all about understanding the equipment and what it can do – especially when it’s powered by the right nesting software.