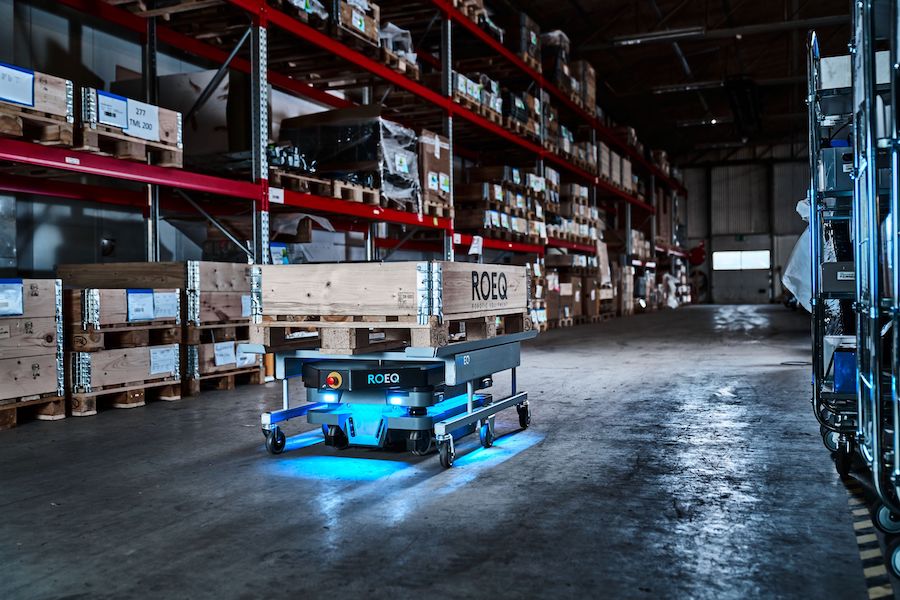 According to a new report from Harry Moser at the Reshoring Initiative, U.S. companies are on pace to bring back a record number of overseas jobs this year. Expectations have that number as high as 350,000, which will bring the total number of reshored jobs to 1.6 million since 2010 when Moser first launched the nonprofit organization and started keeping track.

“The trend of onshoring has been going strong the past few years, and new areas of automation are enabling that,” says Tyler Pence, an area manager at MiR, a manufacturer of autonomous mobile robots (AMRs). “These areas of automation afford process control, cost control and factories of the future. It’s now possible to achieve all of that here in the United States without the need for the cheapest human labor available. It’s all changing.”

Over the past decade, the adoption of collaborative robots and automation technologies in general have allowed manufacturers to shore up their supply chains and produce more locally. But, there had been a missing piece to that puzzle, which is now being filled by AMRs and the mobile robotic equipment (MRE) that supports them. As one of the earliest developers of AMRs, MiR boasts installations at hundreds of manufacturing facilities, warehouses and logistics centers for global companies such as Toyota, Ford, Whirlpool and Honeywell.

“Many customers now have 30-plus robots installed,” Pence adds.

At its core, an AMR is a motorized cart for transporting things. It’s made special thanks to sensors and machine vision that help it move throughout a facility without human intervention. It is made even more useful thanks to the various types of MRE that it can be outfitted with, such as roller modules that can seamlessly tie into a conveyor belt or rack modules that can increase the size and payload of the materials being transported.

In the past, when parts and material were moved from point A to point B, it was done manually – either by forklifts or by simply carrying them from one station to the next. If there was no one dedicated or available to move these assets, bottlenecks ensued, which typically results in lost time and, potentially, lost revenue. There’s also the issue of heightened safety risks.

“Whether it’s racking, railings or bollards, when you walk into an industrial facility, one of the first things you’ll notice is everything that’s put in place to keep forklifts out of the space where people are,” Pence says. “Everything is bright yellow, so that the forklift operators can see and avoid hazards.”

While safety signage is helpful, it might not matter if a forklift operator is tired or distracted. The nature of driving and shuffling product is very repetitive in nature, so an incident from time to time is somewhat unavoidable.

“It doesn’t matter if you’re the best operator in the world, sometimes things happen,” he adds. “Five-ton forklifts have been driving around these industrial facilities forever, and people have just accepted that there’s an inherent risk involved because that’s the way it’s always been done – until we presented this safer alternative, that is.” 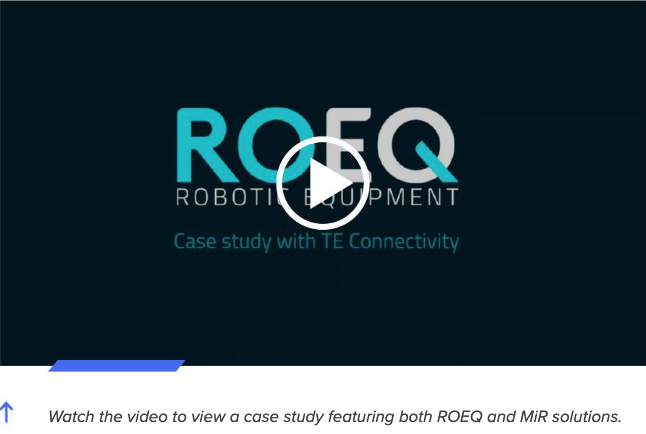 From the offset, AMRs were designed as collaborative robots – to work safely with and around people. They serve as an investment for companies to mitigate risk, and because they reduce the chance for incidents and damage, insurance companies are taking note.

An obvious pushback on whether AMRs truly can replace forklifts is the payload capacity. Depending on the size, some forklifts can carry anywhere between 3,000 and 50,000 lbs. MRE manufacturers understand this and are working to develop top modules that greatly increase the weight and size of what AMRs can move.

ROEQ, an MRE solution provider based in Denmark, is one of the companies delivering on the need for top modules that can carry more and just do more in general. ROEQ launched in 2017 after following the journey of MiR, which is also headquartered in Denmark.

Michael Hansen, a founder and the managing director at ROEQ, says that he and his fellow co-founders all have backgrounds in mechanical engineering and started their careers within the medical industry with a focus on quality, robustness and high performance. Based on their interest in automation and in MiR specifically, they identified a need for top modules that could expand the advantages AMRs were bringing to market.

In terms of the types of MRE ROEQ has developed since the company’s launch about five years ago, Hansen says there are three main categories: cart solutions, lifters and roller modules.

Cart solutions offer the ability to move heavier payloads as well as bigger parts and materials. Lifters raise and lower a pallet for easy mounting and dismounting, expanding the size and shape of items that can be transported. Roller modules ensure safe transfer of goods between an AMR and a static conveyor system. When paired with the company’s GuardCom technology – a communication bridge that relies on sensors rather than Wi-Fi, which can be unstable in industrial environments – additional safety is injected into the operation.

For its part, MiR has also developed add-ons to enhance the work the company’s AMRs can already achieve. The MiR250 Hook provides towing capabilities for loads weighing up to 1,100 lbs. The company is also working with partners, such as LogiTrans that is producing a pallet jack that can lift heavy loads onto an AMR without the need for a specialized designed rack or transfer module.

Beyond these offerings, current customers and integrators are developing a myriad of customized solutions. As more companies adopt and become experienced with the technology, more solutions are bound to be developed and commercialized.

The top modules that ROEQ produces are just one part of the company’s overall solution approach, which unsurprisingly includes new safety updates. In the near future, it will also include the ability to track parts and materials as they move through a facility by adding, for example, a barcode reader.

“The key point here is that all our top modules hold the interface to the customers crate, package or pallet and, therefore, it is natural that the MRE provides information on, as an example, ID of the goods to an overall ERP or WMS system,” Hansen says.

“Industry 4.0 is a big driver for innovation at ROEQ,” he continues. “Think of an old-fashioned kind of company where their crates are on stationary conveyor belts. Once they take them to a pallet jack, they’re out of the system. With our technology, we’ll be able to follow those crates, parts or materials all the way through the manufacturing process out to the warehouse.”

If a customer were to call the “old-fashioned” company to ask about the status of their order, the progress or whereabouts of the job aren’t always known. For companies that are striving toward the concept of a smart factory where a part’s whereabouts are tracked via GPS, ROEQ’s equipment will tie into that strategy. 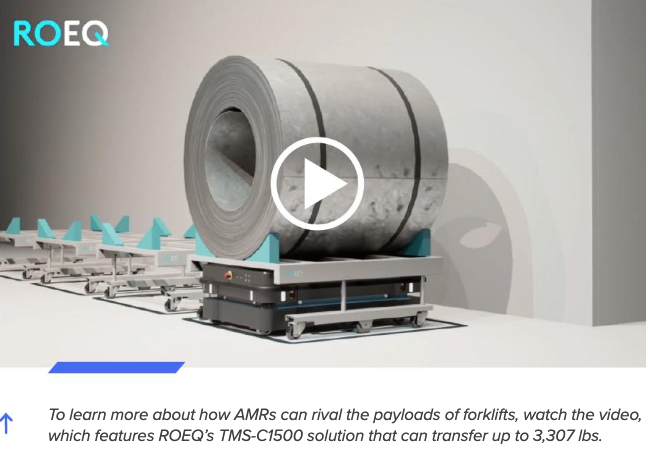 Clearly, these new areas of automation are serving a useful function, but perhaps most important, they are tackling the persistent challenge of finding and retaining quality labor. Not only do AMRs and MRE reduce the need for manual laborers, but they are also getting people excited about working in manufacturing. More advanced positions will still need to be filled, such as machine operators or in robotic programming and management roles.

“Automation was already projected to grow like crazy, but Covid just accelerated that,” Pence says. “The workforce is different now; it’s changed. Unemployment is relatively low, but there just isn’t enough people out there to take these jobs. The cost of labor has gone up considerably, and overall, people just don’t want to work a warehouse job or do manual labor or order picking.”

So, for the companies that invest in these solutions, long gone are the days of the dirty, dangerous factory. Instead, they’re opening the doors to safer, modern facilities, something that is highly attractive to the next generation of manufacturers.