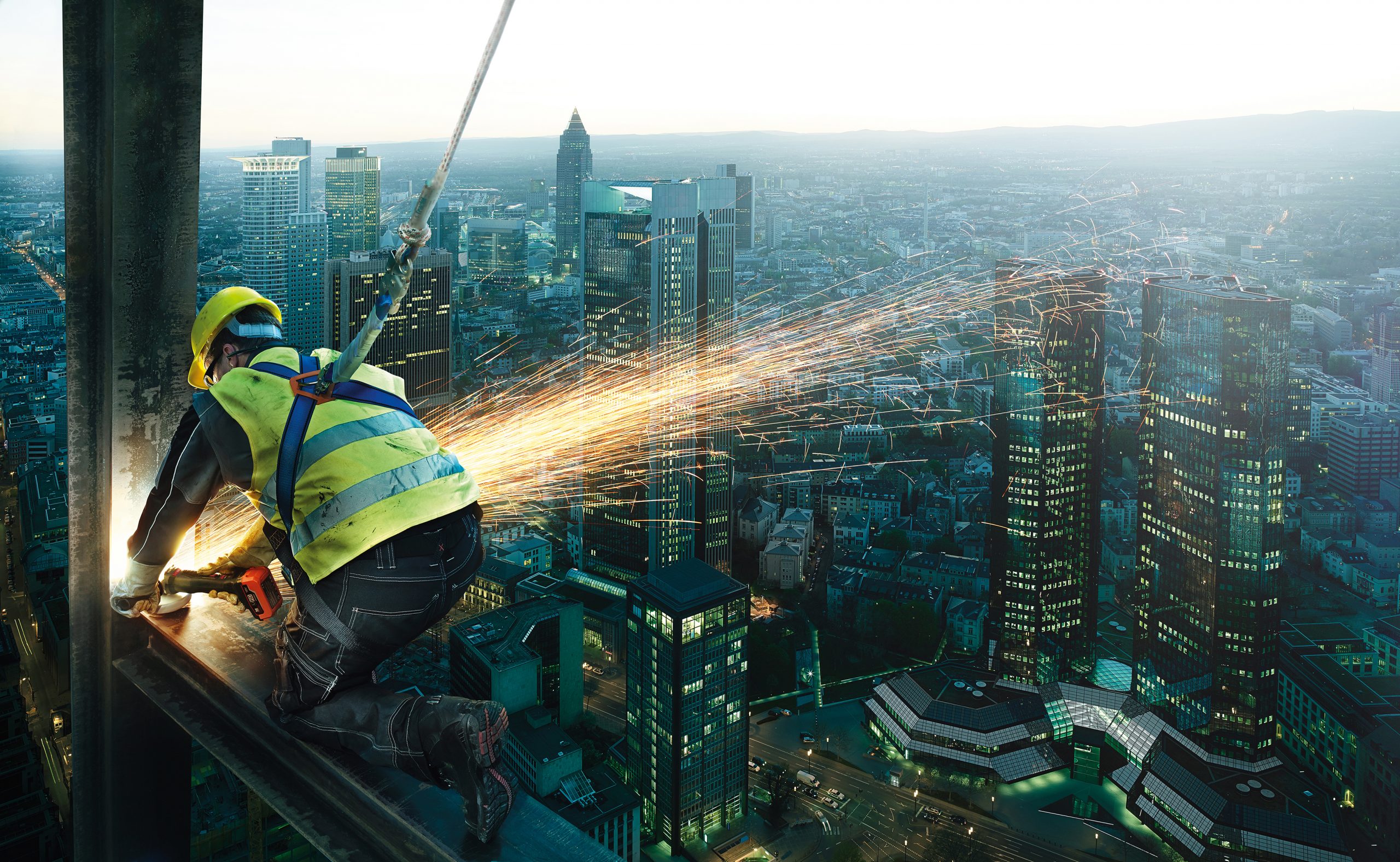 Anyone who has worked with a hand-held or hand-guided machine that vibrates is probably familiar with the odd sensation in the fingers, hand and arm after hours of work. Unfortunately, overexposure to vibration can cause permanent damage.

It’s referred to as hand-arm vibration syndrome, or HAVS. More than a million American workers use vibrating hand-held power tools on a regular basis, and some suffer the debilitating effects of the syndrome.

The Centers for Disease Control and Prevention identifies HAVS as causing numbness, pain and blanching (pale or ashen) fingers. Even after one year of exposure to vibrating tools, workers can show advanced stages of HAVS. Permanent damage is referred to as Raynaud’s phenomenon.

Hour after hour of working with vibrating equipment forces changes in blood vessels, causing fingers to turn a white or gray color (blue in advanced stages), and causing muscular
aches and pains. Metal fabricators, farmers, construction workers, truck and auto manufacturers are among those familiar with the side effects of working day after day with vibrating tools.

According to John Thompson, national technical sales manager at Pferd Inc., a company that produces tools and abrasives for grinding, cutting and surface finishing, the recommendation from NIOSH makes perfect sense. And that’s because Pferd’s first concern is worker safety. Second to worker safety is productivity, which directly correlate to each other.

“To get the most productivity out of any fabrication process, it’s critical to develop a program that protects the human operator building the product,” Thompson says. “Several factors can impact worker productivity and affect overall employee health and safety. One high-impact factor is vibration.”

“The truth is most of these injuries can be prevented.”
Terry Tuerk, senior product manager at Metabo Corp.

While anyone who uses a vibrating tool is at risk, the U.K. Health and Safety Executive (HSE) organization specifically lists tools used for these tasks on its website:

The HSE says working with hand-held or hand-guided machines more than a few hours a day can lead to damaged nerves, blood vessels and joints of the arm, wrist and hand. However, those particularly at risk are workers using a hammer action tool for more than 15 min. per day and some rotary and other action tools for more than an hour per day.

The HSE also lists early signs and symptoms to look for and warns that when the damage is done, “it’s permanent.”

Permanent effects of this damage, according to the HSE, include the following symptoms:

Several factors can impact worker productivity and affect overall employee health and safety. However, there are two prevailing schools of thought on the subject of vibration. One is that protection methods should be designed to shield the operator from vibration.

A quick and easy method of achieving this reduction (in varying degrees) is to wear padded gloves, wraps or use isolation handles on power tools to lessen the vibration effects. Unfortunately, this is not a fix-all because productivity is sometimes affected.

Furthermore, as Thompson says, isolating the senses during the abrasive activity can have an adverse effect and actually increase operator fatigue.

“The problem with most add-on solutions is that they only isolate the senses during the abrasive activity,” Thompson says. “Isolation-based products have helped with coarse grinding such as the use of depressed center grinding wheels, but when it comes to finer finishing and blending, the operator often relies on all his senses, especially that of touch, to ‘feel’ his way on the piece.”

Thompson says in the early days of flap disc use, the largest complaint was the lack of operator feel and control. The use of a coated abrasive sanding disc on the correct density backing pad allowed the operator to feel the contact of the disc to the material.

“Flap discs were so stiff that tactile sensation was removed,” says Thompson.

A more sought-after solution, therefore, is to reduce vibration by designing the abrasive product to perform with reduced friction, noise and vibration without affecting performance. This leads to the evolution of flexible abrasive products, which are still aggressive enough to remove material at a more productive rate than bonded grinding wheels.

This solution allows the operators the control they need while reducing vibration. This not only improves the tactile sensation, but also reduces the harmful physical affects that lead to HAVS.

A shop owner might not like the higher costs associated with a flexible abrasive consumable, but they gain a less fatigued operator who is less likely to suffer adverse health effects associated with vibrating tools, leading to a greater overall value and productivity.

“You can either block the vibration or design it out of the product,” Thompson says. “The human factor is worth the best efforts available to add value to any manufacturing process.”

Thompson says his company keeps the tough working conditions of metalworkers in mind, especially with tasks that require an extended period of time to complete. Pferd designs its products ergonomically to increase safety and working comfort.

“Operator health is a key consideration in the company’s product development process,” Thompson says. “This design philosophy, called PferdErgonomics, is a component of the larger PferdValue program designed to optimize work processes resulting in increased productivity and reduced costs for the overall operation. Focusing on elements such as vibration, noise, emissions and haptics, PferdErgonomics demonstrates measurable improvements in these key factors that impact operator health and safety, and consequently, operating costs.”

“Along with a significant increase in material removal rates, operators can feel the difference,” Thompson notes.

Hand-held power tools have changed dramatically over the years, becoming smaller, lighter, safer, more ergonomic and more powerful. Nowhere is this truer than with modern small angle grinders, which have become the most versatile tool in the shop.

Today’s small angle grinders are considerably more powerful than their predecessors, so it’s not uncommon to find small grinders with 13 to 14.5 amps of power or more. New accessories are available giving rise to more applications. Tasks such as metal removal, beveling, weld preparation, deburring, cleaning, brushing, sanding, finishing, polishing and cutting are all common.

Terry Tuerk, senior product manager at Metabo Corp., a power tool manufacturer, says as the use of the angle grinder has increased with so many possible applications, there is an increased possibility of operator injuries.

“The truth is, most of these injuries can be prevented,” Tuerk says. “Angle grinders are very safe when the operator is aware of the possible hazards, follows the safety guidelines and when uses manufacturer supplied wheel guards and side handles.”

Less visible than the guard or side handle, yet just as important, are safety features built into some angle grinders that lessen or prevent the possibility of injuries, both sudden and from long-term use.

Metabo makes it a focus to add additional safety features into its grinders. The company is celebrating the 50th anniversary of the original and still unique mechanical safety slip clutch that is built into its small angle grinders.

For many years, the S-Automatic safety slip clutch has prevented or lessened the chance for injuries from kickback, which is a leading cause of angle grinder injuries. The mechanical slip clutch absorbs the forces that create kickback, allowing the operator to maintain control of their grinder in a situation where the wheel or accessory has been bound.

Other safety features include the Metabo brake system feature that stops grinding wheels in 2 sec. and cutting wheels in 1 sec. There is also the added benefit of greatly reduced kickback risk and loss of control. Metabo also has the restart protection built in. This reduces the risk of accidents in the event of a power cut or if somebody removes then reinserts the plug into the power supply with the switch still on.

It is management’s responsibility to not only provide safe tools, the proper accessories and the proper personal protection equipment, but it is also their responsibility to ensure that angle grinders are used safely. Effectively communicating safety requirements and regular safety training is a must.

Exposure to vibration is being studied more and taken more seriously. In some countries, regulations are in place limiting the amount of time an operator can work with vibrating tools. Metabo is a leader in the industry in terms of solutions to help prevent worker injury.

Metabo has developed solutions for its angle grinders that are designed to reduce the risk of long-term work-related disorders caused by vibration. Metabo angle grinders include the MVT Anti-Vibration side handle that isolates vibration and reduces the vibration felt by the operator by 60 percent, allowing for longer-term use with lessened fatigue.

Several Metabo angle grinder models also include an auto balance feature that offsets the vibration caused by an accessory that is out of balance, virtually eliminating the vibration felt by the operator. Metabo angle grinders with the auto balance feature allow for full-time use with no limits. Additional benefits of the auto balancer include up to 100 percent increased tool life as well as nearly doubling the life of the grinding wheel.