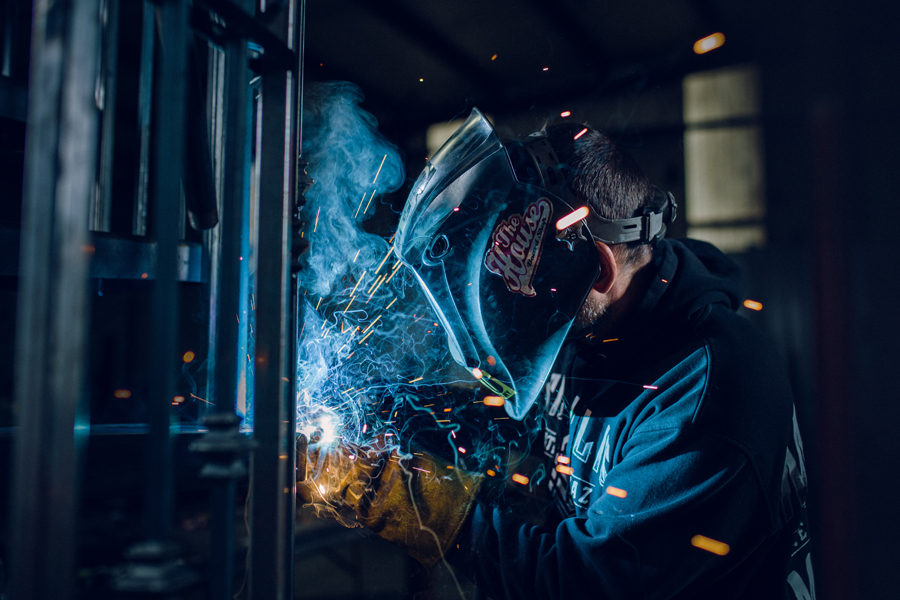 Tattoos, rock bands, fast cars and the endless possibilities of metal. These are a few of the interests shared by this group of young entrepreneurs, each of whom have begun their own fabrication companies in the face of job changes and health problems, never mind the uncertainty that plagues anyone who’s cut the corporate rope to follow their dreams.

These three have set aside the status quo for something more. Their stories speak volumes about the human spirit and the determination that so many of our readers have in common. Please join us in wishing them the best of luck going forward.

Call him Boonie. He and his wife Bethany own and operate Factor Fabrication LLC, a design and fabrication company in Des Moines, Iowa, that specializes in custom furniture, staircases, railings and “significant pieces built with purpose and integrity.”

If it hadn’t been for Boonie’s near-death experience in 2008, none if it would have happened.

Boonie began in the mechanical department at Iowa State University’s Memorial Union while pursuing his degree in journalism. After graduation, he took a job with a Des Moines fabrication company, but remained in touch with his colleagues and was speaking with one of them when he had a pulmonary embolism.

“The doctor initially thought it was pneumonia,” he says. “I was home sick, talking on the phone with a professor I was working with on a lecture and suddenly I couldn’t breathe. Luckily, my mother lived just down the road and she rushed me to the emergency room. I flat-lined a few minutes after arriving in the ER.”

It turned out Boonie has Prothrombin G20210A (Factor II), a rare blood disorder that increases his risk of blood clotting. He was resuscitated and then airlifted to a Des Moines hospital where he made a full recovery after a few nail-biting days in intensive care. He’s since been prescribed blood thinners and lives a normal life, in spite of his genetic condition.

This medical emergency wasn’t Boonie’s only life-altering event. As bass player for the rock band “Why Make Clocks,” he made several tours of the United States with one gig landing him on the Gulf Coast a week after Hurricane Katrina.

“It was a scary time,” he says. “Shotguns on porches, curfew at sundown. People were happy to see us, just to get away from their worries for a while. That sort of thing makes a guy think.”

Soon after his return from the hospital, Boonie quit his job to pursue a dream he never knew he had.

“The embolism was a lightning bolt for me,” he says. “I evaluated what I was doing and realized I wanted to live life on my own terms, to do something that matters. I’d grown up in my grandfather’s shop, watching him weld and do carpentry work, and decided to start a company, one that could make things of value.”

Having gained several years of experience within various trades at the university, Boonie was well-equipped with the necessary skills. Unfortunately, the economy crashed shortly after he announced his self-employment. Factor Fabrication spent the next two years scraping by with Boonie wondering if he’d made a terrible mistake.

Happily, that’s not the case. He and his wife hung on and eventually prospered. Today, their company has four full-time employees and 8,000 sq. ft. of fabricating space. Boonie says there’s nothing fancy about his equipment – saws and welders, mostly, with the powder coating and profile cutting subcontracted out to local shops – but that doesn’t stop him and his team from making some very special products.

Factor Fabrication just announced its own line of furniture and is busy with a variety of architectural projects for homeowners and businesses alike.

“It’s all about having a relationship with the client,” Boonie says. “You need to see their vision before you can fabricate and deliver it to them. Anyone can look at a chair, for example, and make it functional or make it aesthetic. I’m trying to meld the two – the form and the function – by utilizing the basic elements of steel and wood. People have been working that equation for centuries now, and it’s working well for us.”

And if you’re wondering about the company name, it’s a result of Boonie’s blood disorder, Factor 20210, a snippet of genetic material that nearly took his life, then paid it back to him, in spades.

Alexis Schlemer has been serious about metal since her late teens, when a passion for steampunk and junk art evolved into something more. With the support and frequent participation of her father, she took classes on stick welding and began augmenting her career as a paralegal with sales of decorative metal flowers and “other fun stuff” out of her garage in Edwardsville, Ill.

Known by friends and family as Lexy, her part-time welding and design company Drop Dead Red got its first big break when Saint Louis Brewery LLC, maker of Schlafly Beer, commissioned her to fabricate a large fire pit for its taproom. It turned out to be the first of many such projects for the brewing company.

She’s not alone. Lexy and her sister Syd had long been involved with their parents Phil and Tina’s auction company, so when Lexy’s burgeoning business venture began to take off, she invited the entire family to be part of it. She changed the business name to Hess Van Schlemer Metalworks, Art & Designs, purchased a Koike PNC-12 Extreme CNC oxy-fuel cutter and put paralegal work behind her forever.

“Everybody was looking for a change of pace and wanted to do something more interesting, so I suggested we should all just join forces and do this,” Schlemer says.

It was a good call. Within a few weeks, Hess Van Schlemer Metalworks began to receive orders for custom-built shelving. The family has since been kept busy fabricating shelving units, as well as steampunk tractors and trailers, displays and signs, metal furniture and “some really cool décor.”

“We take on pretty much anything anybody throws at us,” Schlemer says. “We do displays for horror conventions, and we fabricated the big metal ‘Hellzapoppin’ sign for the Riotfest music festival in Chicago a few weeks ago. Our shelving units have since been sold all over the Midwest, and it looks like they’ll soon be sold nationally. It’s going splendidly.” 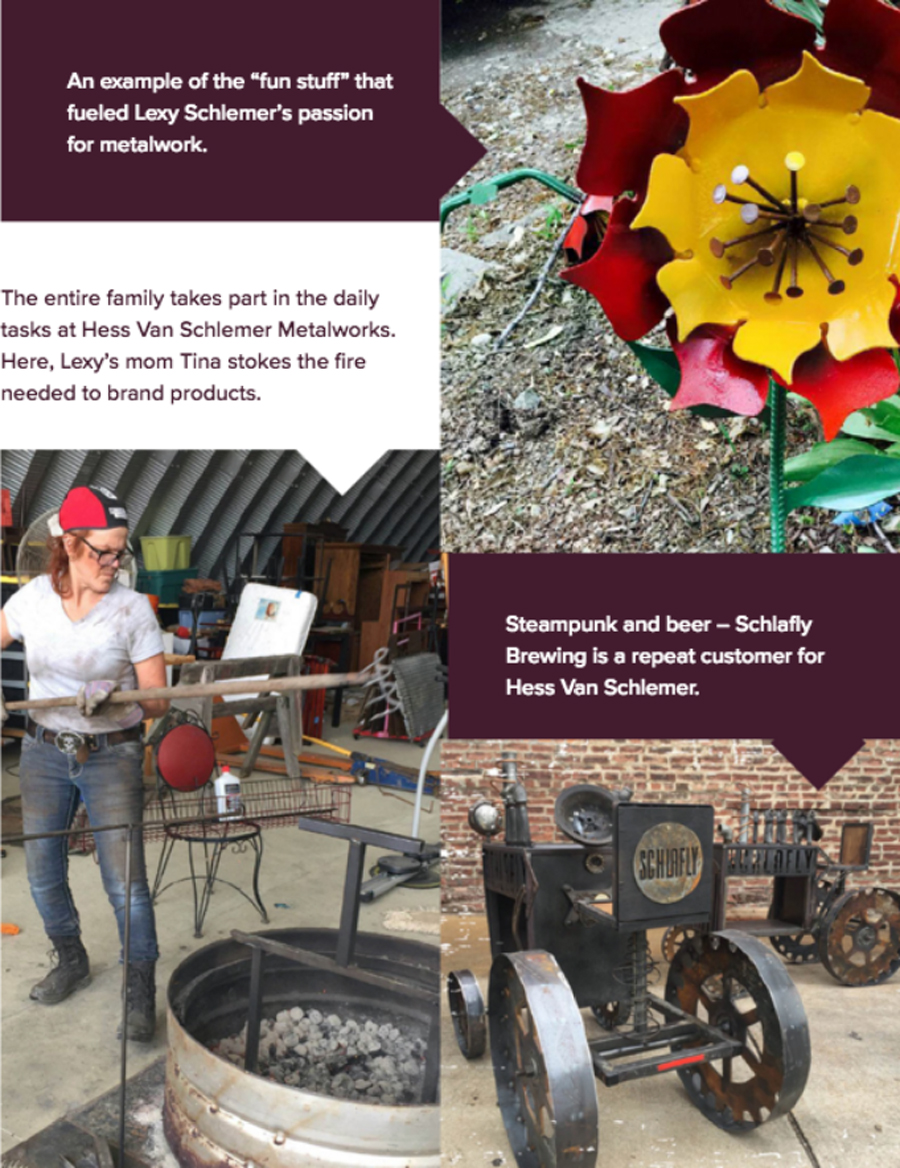 Along the way, Schlemer gave up stick welding in favor of MIG, which she says is “a whole lot easier.” She also lets her sister drive the CNC. “Syd has a degree in graphic design and is very meticulous. She’s done a great job learning how to run the Koike, figuring out what images work best and how much detail you can put into something. There’s a real art to it. So while she does that, the rest of us do the welding and finishing and all the other stuff needed to run a business.”

It’s not all about work, however. In the Schlemer’s case, the family that fabs together also plays together. Their “rockametalbluesabilly” band Candy Coated Evil has been performing at local clubs and bars since 2004, with Lexy playing guitar, Syd on bass, their father as drummer and all on vocals. Schlemer likes to call them the Evil Partridge Family.

Overall, Schlemer is very happy with how things are going. “We keep getting bigger and bigger clients, and we hope over the next few years to bring on some full-time employees and increase our output and our capabilities. We’re thinking about a waterjet at some point, but that depends on what comes down the pipe. Until then, it’s really great to work with my family and fun to show off our talents. We’re definitely headed in the right direction.

As youngsters, many of us in the trades tinkered with our cars, bolting on barely-legal exhausts or jacking up the rear suspension, perhaps adding some mag wheels and big, fat tires. Years later, we reminisce over the rumble of those loud pipes, the smell of burning rubber. For a lucky few, however, these teenage pursuits become a career and then a business, eventually earning them international recognition for their craft.

Jordan Dickinson is one of the few. The Minnesota native has had a love for old cars and motorcycles since high school, when he took his first job at a hot rod shop near his hometown of Monticello. After graduating, he attended St. Cloud Community College for collision refinishing, then went on to Wyoming Technical Institute in Laramie for several automotive specialty programs, such as chassis design, high-performance powertrains, sheet metal fabrication and upholstery.

Dickinson came home, worked at a few spots, but soon decided he wanted something more. He began working for himself in 2004 and hasn’t looked back. Taking inspiration from vintage Harley Davidson and the graceful lines of pre-war automobiles, this now 30-something has made a name for himself as a metal fabricating artist among his fellow bike and car enthusiasts. 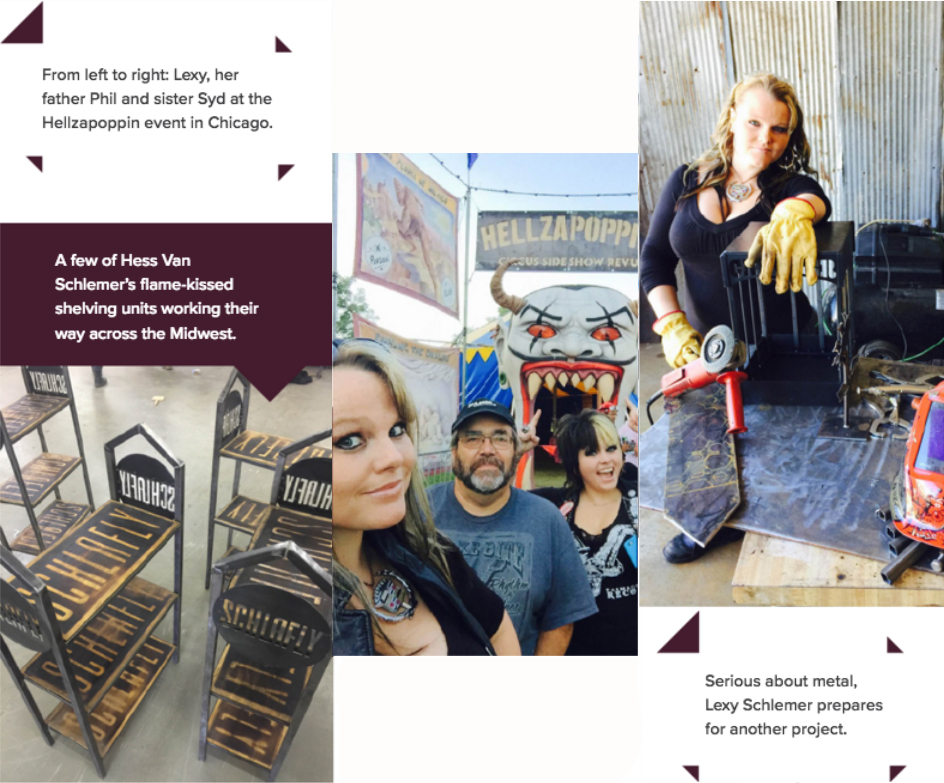 Today, he and his brother Jesse operate Union Speed and Style Co., located just a few hundred feet from the Mississippi River in Monticello. Walk into the shop on any given day and you might see a 1951 Chevy Coupe, 1932 Tudor Sedan or 1929 Ford Roadster receiving a new chassis or some much-needed sheet metal work.

“We do custom fabrication,” Dickinson says. “That might mean building a Harley panhead from scratch, forming some replacement quarter panels for an old hot rod, or even industrial design and architectural work. A few weeks ago, we built the metal support frames for the pergola on someone’s front porch. We also do a fair amount of custom upholstery, from complete car interiors to leather motorcycle seats.”

Union Speed and Style’s equipment list is extensive but fairly basic. The company has bandsaws, welders, shears, a mill and lathe, a finger-pinching English wheel and Dickinson’s favorite, the Pullmax, a universal shearing and forming machine that allows him and his team to duplicate the body lines found in the sheet metal of classic cars. There’s also a frame table, built from a 2,000-lb. chunk of scrap iron found in a friend’s back yard and hauled two hours home in the back of Dickinson’s S10 pickup truck.

The Union Speed team has been invited to display its wares across the country, from the Born-Free 6 Motor Cycle Show at Oak Canyon Ranch in California to the Hunnert Car Pile-Up in Decatur, Ill. The most recent exhibition was the American International Motorcycle Expo (AIMExpo) in Orlando, where it took first place in the Freestyle class. The team is now headed to Cologne, Germany, to represent the United States at the 2018 American Motorcycle Dealer World Championship of Custom Bike Building. 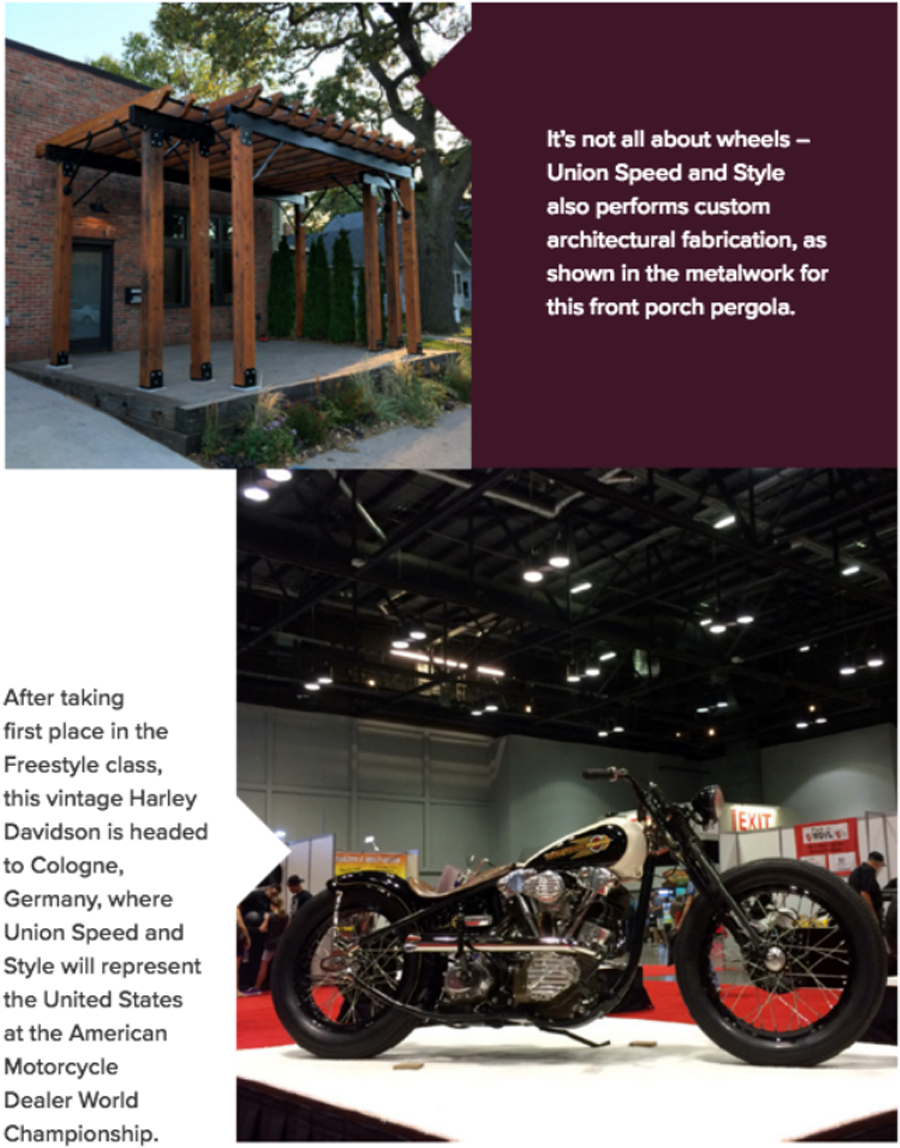 When asked about his future plans, Dickinson says he looks forward to whatever comes across the table. “Our direction obviously is to continue our work with cars and motorcycles, but we’re certainly open to industrial and other types of work. We have the ability to do some very specialized fabrication, stuff that other shops can’t or don’t want to handle. That’s what we do best.” 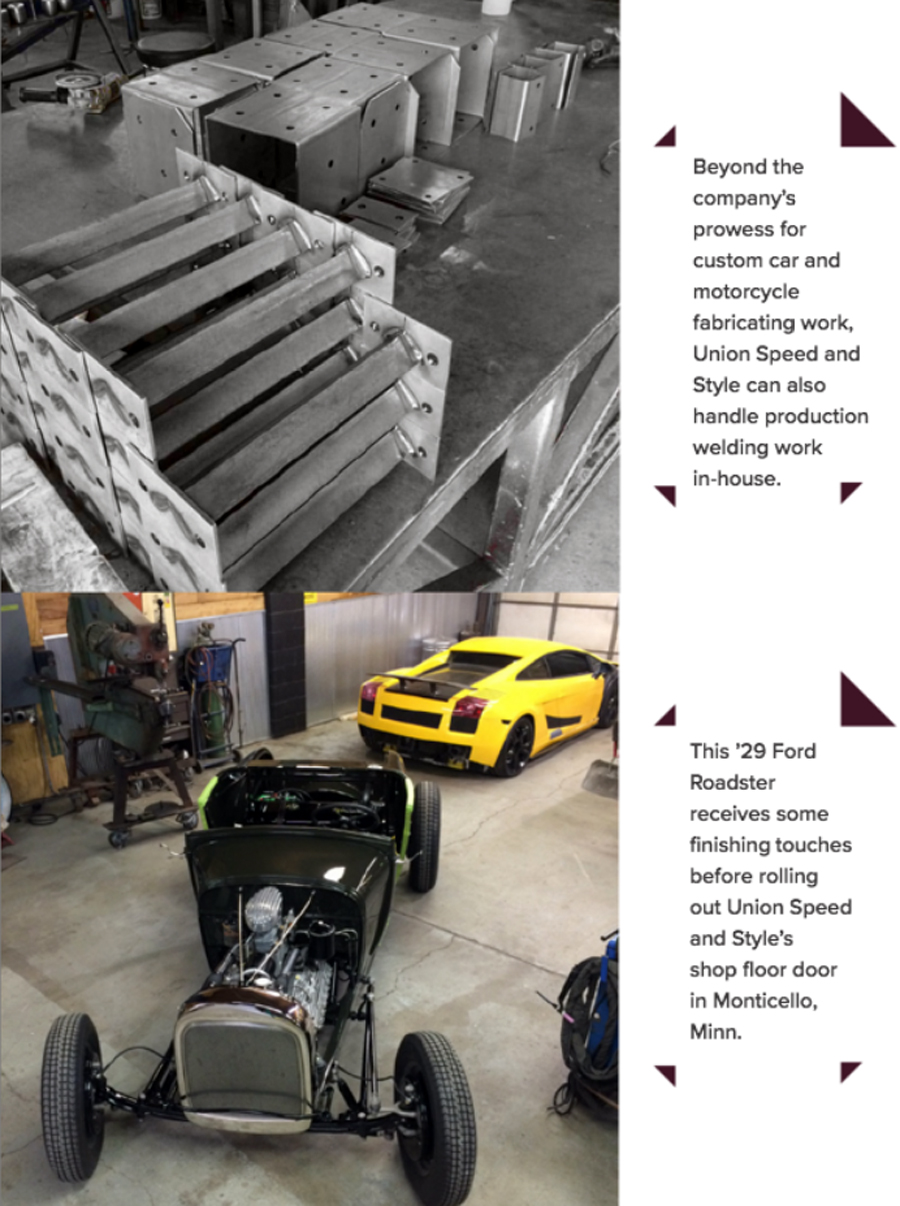