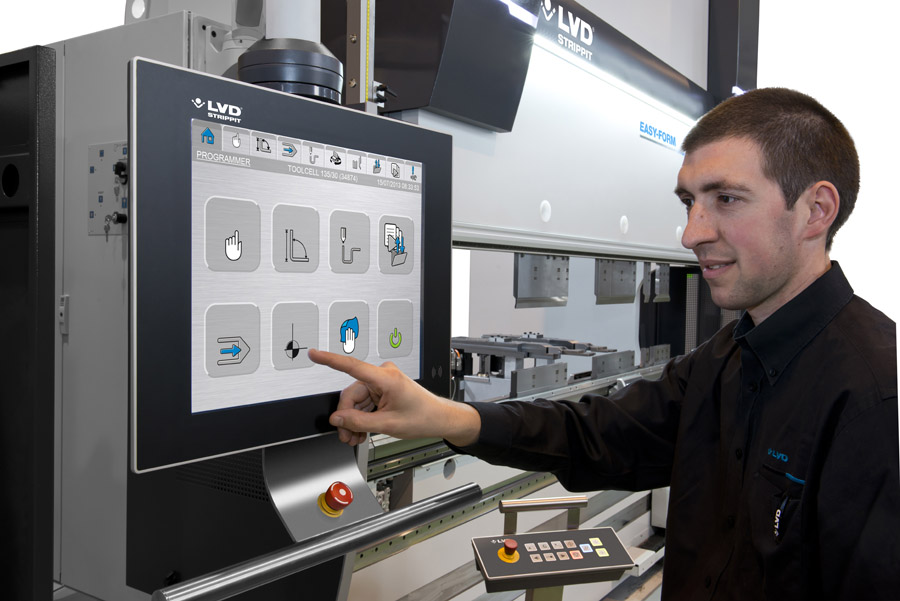 Fortunately, technology has come to the rescue. Many of today’s machines offer adaptive, in-process control over the bend angle to make adjustments in situ to ensure that precise angles are met—from the first part to the last.

One of the biggest issues is setup times, especially for short runs, says Scott Ottens, Amada’s bending product manager. “You’ve got these short runs and you spend so much time on setup, which kills you on short run applications. It’s important to be able to get in there and bend that thing up quickly and accurately without a lot of fussing around. Sometimes you can’t even discern where the inaccuracy started and ended, because it can occur anywhere in the process.” 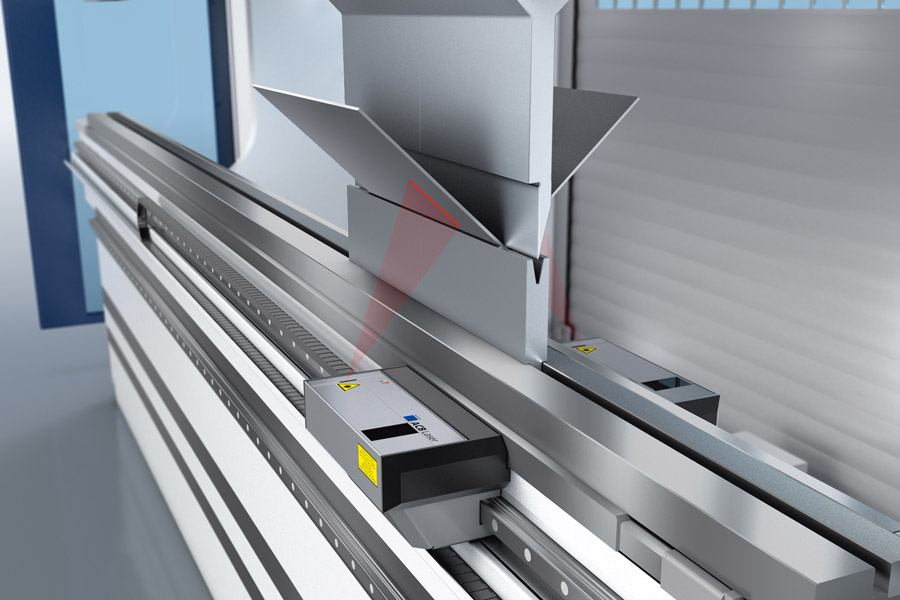 According to Trumpf, the manufacturing tolerances during sheet production allow sheet thickness fluctuations of up to ±10%. Also, the sheet thickness can vary between the sheet margin and middle due to the rolling process. With air bending, the angle is determined by the plunging depth of the upper tool. Thus, a sheet thickness deviation of 10% already leads to an angle deviation of 3 to 4 degrees, without considering other variables.

“If there was no springback,” says Amada’s Ottens, it would be easy for control software to calculate how deep the ram needs to go to get the angle, and that would be the end of it. Right now, operators program the angles they want and then they’ll bend, measure, make an adjustment, then maybe re-hit that part. Or what some guys do is they’ll have blanks of the same material so they can test bend and sneak up on the bends that way. Or, what happens quite often: if they need ten parts they’re going to cut fifteen for all the test bending. That’s the first benefit of these angle correction devices. They’ll eliminate that completely. If you need ten blanks, you can just cut ten blanks and you’re going to get ten good blanks. 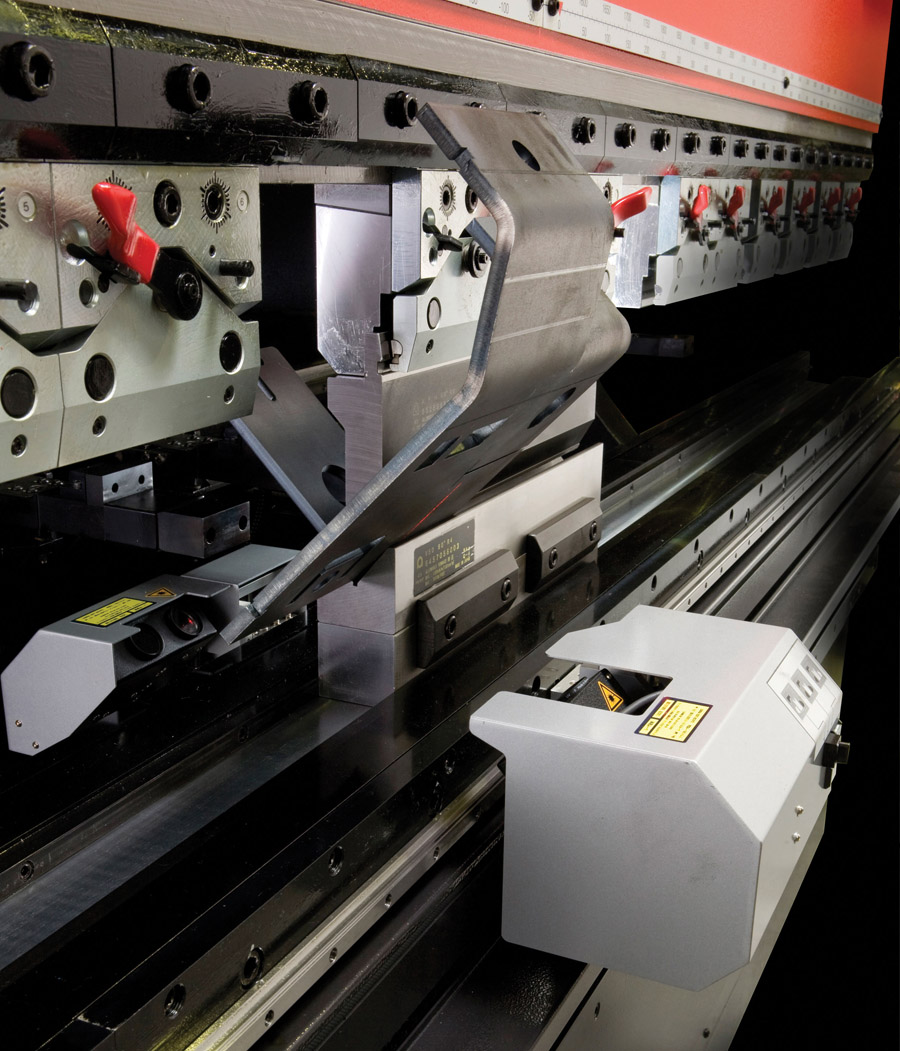 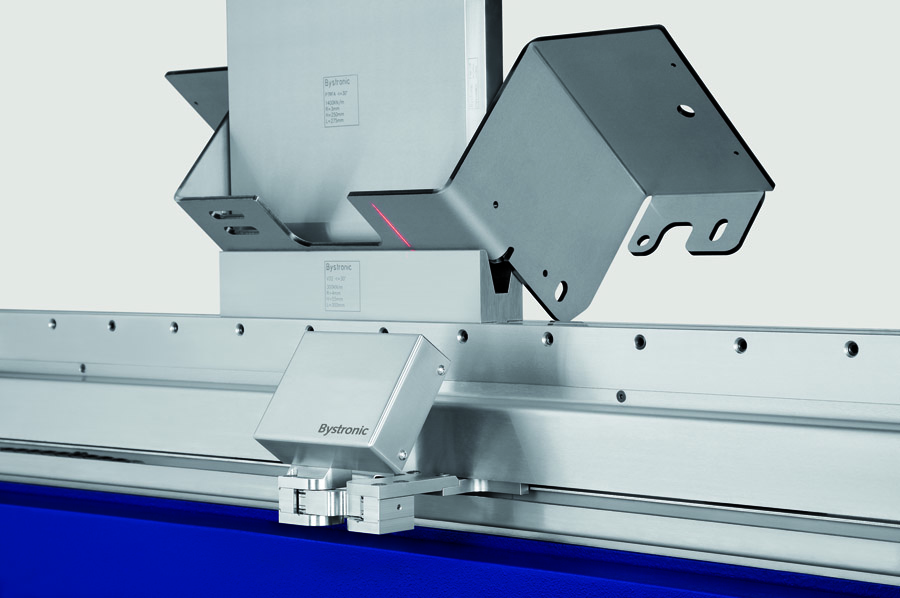 “Typically, in gauged steel, 12 – 16 gauge and lighter, we’ll see a degree and a half of springback. That’s a mild steel. You get into stainless steel and you get up to three degrees of springback — sometimes more, depending on the alloy of stainless you’re bending. If you get into some of these exotic materials you’re talking double-digit springback. It can be huge.”

Amada has two bend-angle measuring and correcting systems. There is a touch-probe system, called the Bend Indicator Slide. A mechanical probe comes up on either side of the part. It’s mounted on a unit in front of the machine, and it’s programmable. An operator can choose if he wants to measure all the bends on a part, or if he’s got one bend that’s really critical for him, he can program it to automatically come over just for that bend.
It will come up and take its measurement position during the bend, adjust the bend, and then move down out of the way. It will work on thick material and up to a 1.5 in. V. The probe is harder to use on larger Vs; that’s where Amada’s laser device, which scans the part for angular tolerance, comes in. The Bend Indicator Slide is highly accurate: 10 – 15 minutes of accuracy, or a quarter degree, plus or minus.

The automatic laser Bending Indicator (BI) is Amada’s latest innovation in advanced bending technology. Mounted on a linear guide rail running across the front of the lower ram of the press brake, the BI can be positioned at any bending point on any work piece along the ram. In operation, the Bending Indicator uses laser sensing to zero its position relative to the die. It then laser-senses the position of the workpiece as it is being bent, feeding that information back to the machine’s CNC, which stops the bending ram only when the programmed angle is
accurately achieved. Then the laser helps to complete the bend with an accuracy of plus or minus a third of a degree.

Bystronic’s Optical Bend Guiding System is based on optical LED. A bar of LEDs is located above the tool clamping in the ram, allowing easier tool positioning, more effective station guiding, clear back-gauge positioning, clamping open, error, and end-of-job indications. It guides the operator through all of the machine setup and bending sequences, reducing setup times and ensuring part quality, says the company.

For the highest part accuracy from the very first bend, Bystronic offers its Laser Angle Measuring System (LAMS). The LAMS system automatically positions itself and measures each angle that is produced, to accuracy approaching a quarter of a degree of the programmed angle. The Optical Bend Guiding System and the LAMS can be combined.
A lot of intelligence and experience is built into the control. The idea is that an operator, if he knows how to operate a brake, can work on different materials even though he has never bent that material before — and be successful at it.

LVD’s Easy-Form Laser sensing mechanism tracks the workpiece during the bending process and transmits the digital information in real time to the CNC control unit, which processes the information and recalculates the depth adjustment to obtain the correct angle in real time—with no process interruption and no loss of production time. The system’s integrated adaptive forming system monitors it in real time and compensates for all variations in material thickness, tensile strain, and grain direction.

It takes symmetrical measurements at the front and back of the die to determine the exact value of the angle of the workpiece. The system projects straight lines composed of multiple light points onto the workpiece and the vertical part of the die, providing a measurement calculation every 20 milliseconds.

The system is located on the front and back side of the press brake table and consists of two laser monitors linked with an expert software database in the CADMAN-CNC control.
There are two ways that it can be used. One is to call up the springback factors that are in the CNC’s intelligent database, and to apply a springback factor based on the material type that’s being formed. Or it will measure actual angles and employ the feedback. If you want to form a 90 degree angle, it will form that angle and then back up just a bit; measure how much it springs back; and then it will know how much more and how much deeper it needs to go to give you that precise 90 degree angle. It will re-hit that part or it will re-extend the ram into the part in order to give you the precise angle.

Trumpf has two different angle-measuring systems. Which to choose depends on what the customer’s application requirements are. There are a lot of specialized applications in sheet metal fabrication; a heavier plate in agricultural industries, stainless steel, and aluminum in aerospace. There are two approaches that are mostly used on the automated systems, what Trumpf refers to as their ACB and TCB systems, which represent different styles.

ACB, or the Automatically Controlled Bending angle sensor, is integrated into the tooling. It makes one of the press brake die segments basically an electronic protractor for the machine. During bending, two sensor plates integrated into the top tool measure the actual angle and the resilience of the bend part, and control the beam at the desired angle. ACB is extremely flexible because it works virtually independently of the shaft length, measuring angles ranging from 35 deg. to 145 deg. The system is rated to an accuracy of plus or minus 0.3 degree.

Then it will adjust the bending position based on material variations. The TBC system, because it’s a thickness compensation system, is very sensitive. It responds to differences on the order of 0.01 millimeter, or 0.001 in.

Trumpf’s TruBend product manager Tom Bailey says, “There are more error-checking steps in automated production, giving the system more chances to catch itself if there’s an error. That’s really important to your peace of mind if you want to set a system running on 1,000 parts overnight, while you turn the lights off and go home. You really hope when you come in the morning that you aren’t facing a very large pile of scrap parts.”

With optics, mechanical touch, and intelligent control. press brake builders have solved most of the bend-angle problems that have plagued press brake operations for decades. And just in time; stronger, less-predictable
materials are coming.