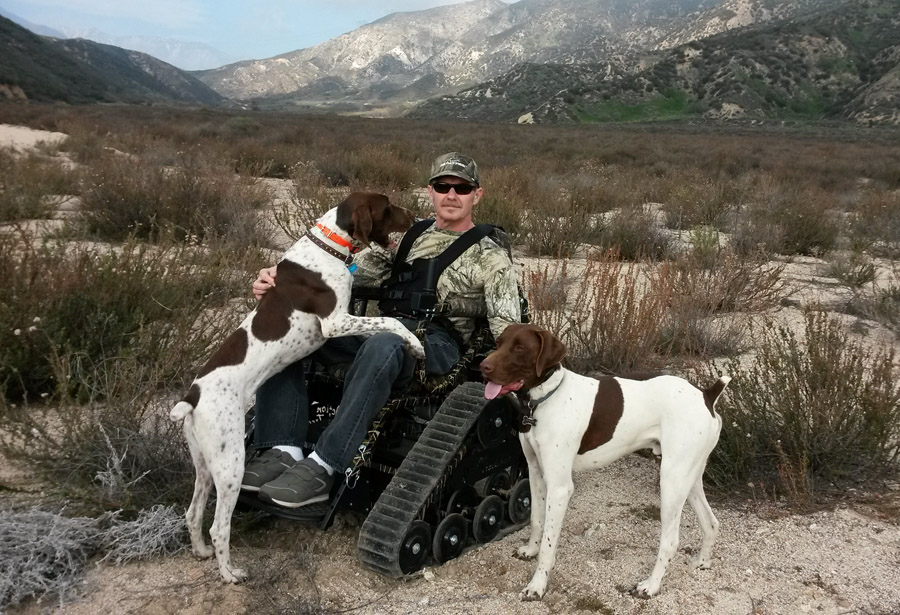 As far back as the 3rd century B.C., humans have innovated ways for those with disabilities to be mobile using a “wheelchair.”

In 1595, the first known dedicated wheelchair was invented followed in 1655 by the first self-propelling wheelchair. During the last half of the 19th century, improvements were made, such as rear push wheels and hollow rubber wheels.

Modern wheelchairs, however, represent much more than just getting from point A to point B.They offer users independence, improved health and more enjoyment from life. And, thanks to an all-terrain wheelchair called the Action Trackchair, they offer enhanced access to the great outdoors. 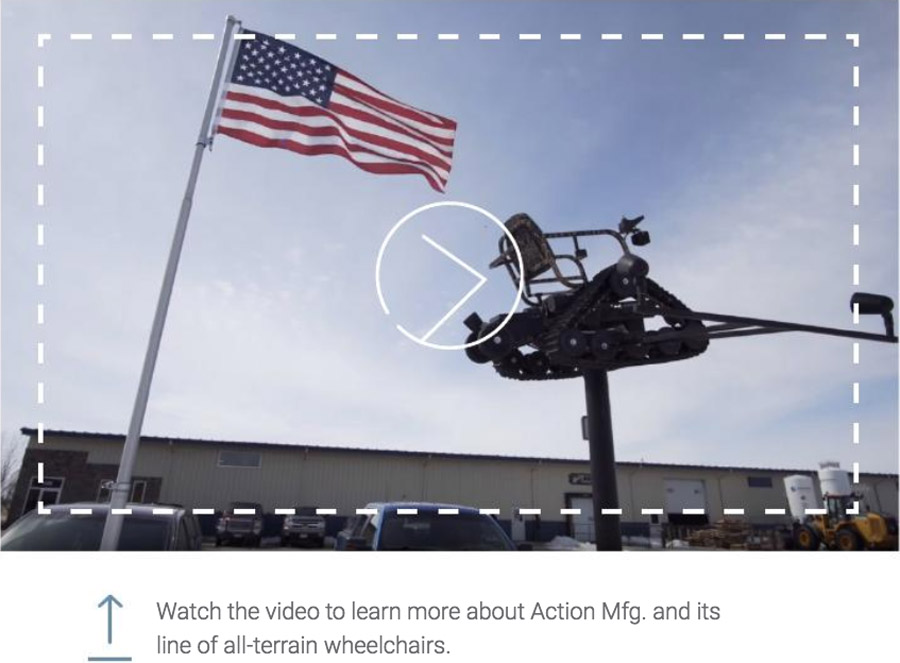 In 1998, Tim Swenson’s 16-year-old son was the innocent passenger in a car accident that left him paralyzed from the waist down. Just as his son’s life was forever impacted, Swenson’s, too, would never be the same again.

“You’re never prepared for those kinds of things,” Swenson says. “But we have to go on with life and make it the best we can. For me, I found inspiration from other people.”

After his son’s accident, Swenson started noticing people in wheelchairs more than ever before and would strike up conversations with them, asking for their stories and learning from them. Time and time again, Swenson thought that there must be some way that he could give disabled people the opportunity to regain their mobility or even do things they’d never done before. For his son, it was experiencing the great outdoors.

Prior to the accident, Swenson was the president of Action Mfg. in Marshall, Minn., a recreational motor sports business. With the goal of getting his son – and others with limited mobility – back into nature again, his other son took over the business giving Swenson the ability to shift his focus to producing an all-terrain wheelchair.

“Being in the snowmobile business, I figured that there had to be a way to get similar tracks on a wheelchair,” Swenson says. “It’s turned out to be incredibly rewarding work – being able to help people get back on the beach or out in the snow or wherever they couldn’t go before.”

For Tim Swensen, the inventor of the Action Trackchair, and his team, manufacturing the company’s all-terrain wheelchairs is incredibly rewarding work.

At first, Swenson had no idea whether it would take off or not. Today, however, Action Mfg. manufactures the Action Trackchair, the Action Trackstander and a variety of accessories such as rear utility racks, fishing rod holders, gun racks, footrests and more.

To date, the company has sold more than 3,500 wheelchairs – more than Swenson ever imagined. And sales have consistently grown. “We knew where it started, but we didn’t know where it was going to go,” he says.

But wheelchair sales are just the tip of the iceberg as far as Swenson is concerned. Trackchairs have had an impact not only on the lives of the people using them but also on their families’ lives. These chairs have made so much of an impact that Action Mfg. needed to make some operational changes to keep up with the flood of orders coming in. 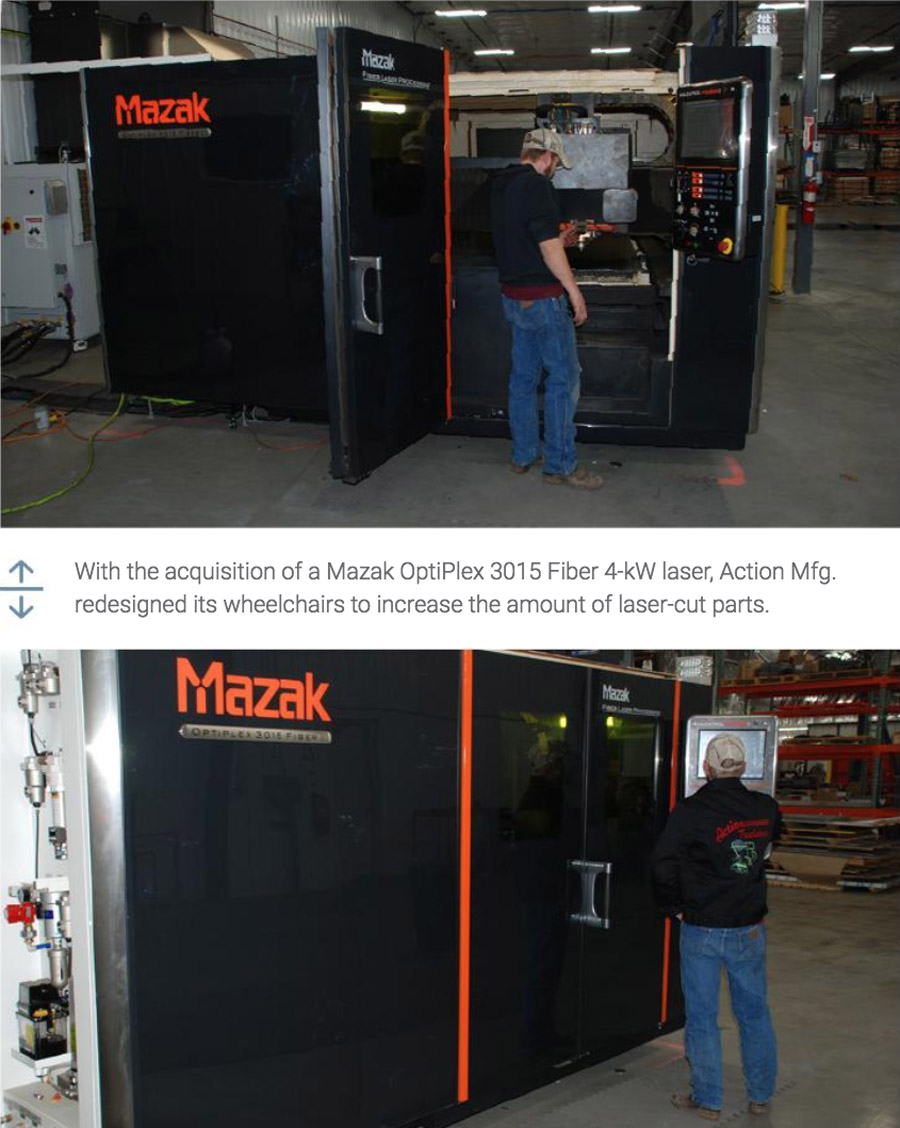 Initially, Action Mfg. relied on outside fabricators to produce components for the wheelchairs, but Swenson quickly discovered that outsourcing couldn’t adequately support the increase in demand. To bring the work in-house, significant equipment investments were next in line, including the acquisition of a laser cutter.

“It was the natural progression for the company,” Swenson explains. “Before investing in our laser, we had been outsourcing to a third party that was plasma cutting our parts. With plasma, there’s a lot of cleanup and grinding and it’s less accurate. We wanted to bring more of our production in-house and so we knew we needed a laser.”

After months of operational improvements delivered by a used 2-kW Mazak CO2 laser Action Mfg. had bought, Swenson realized the company would eventually need a new fiber laser. In addition to the extra speed a fiber brings to the table, it would also improve the overall integrity of the wheelchairs.

“We knew this was the best way for us to produce our product with speed and accuracy,” he says. “Less than a year after purchasing the used laser, we bought the new fiber laser.”

In late 2016, the company purchased a Mazak OptiPlex 3015 Fiber 4-kW laser cutting system. Its addition on the shop floor changed things for the company in significant ways.

“Because we needed to increase production, we redesigned our chairs so that we had more laser cut parts,” Swenson explains.

“With people in wheelchairs always wanting to go faster, further and for longer, aluminum is a better option,” Swenson says. 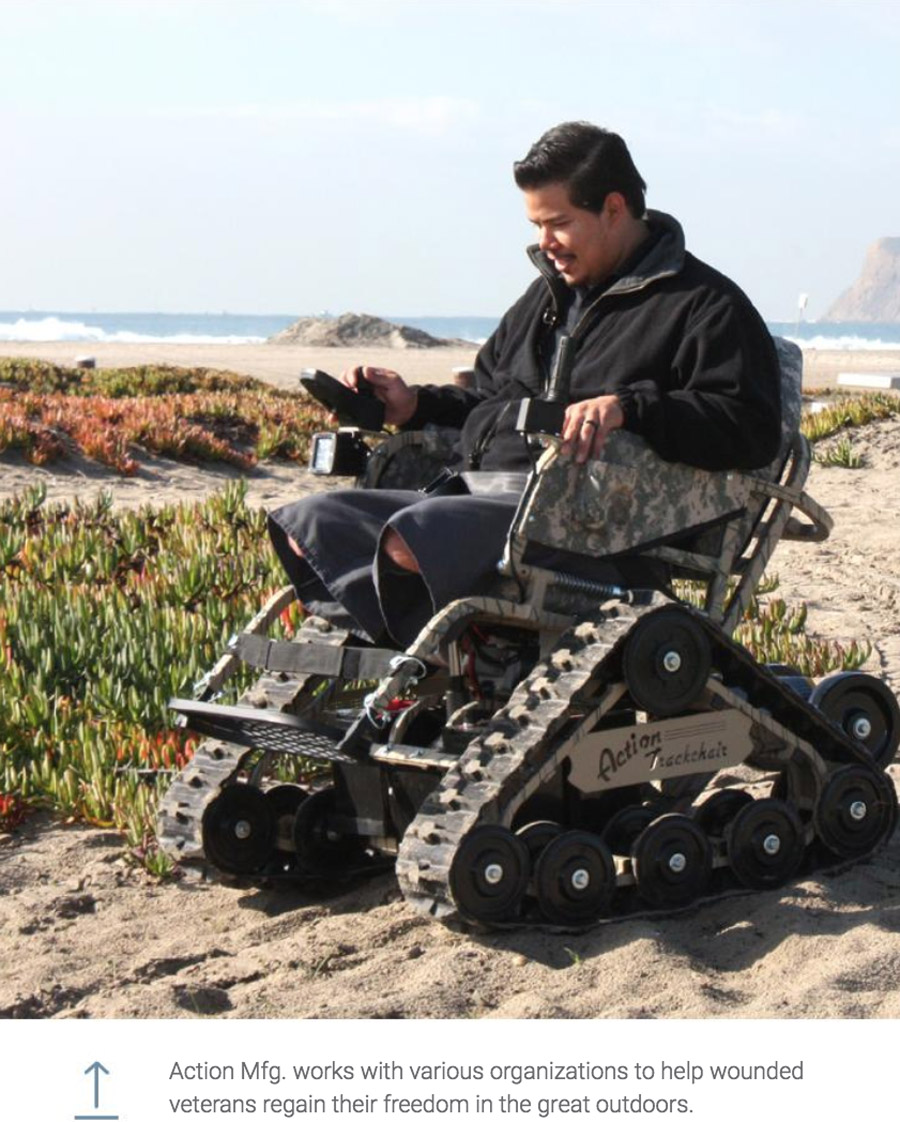 The addition of the new fiber laser was just the beginning of the positive changes ahead for Action Mfg. With production increases and operational changes, the company needed more space.

Since then, the company also purchased a robotic welding cell to further increase shop floor efficiency. With so many changes happening in-house, Swenson stresses the need for good equipment partnerships.

“We went with Mazak because we wanted good service,” he explains. “As a company, we want to provide good service to our customers, so we want that in return. We feel that Mazak has really good support.”

Knowing that there is usually a learning curve when it comes to lasers, the team at Action Mfg. didn’t lose momentum when faced with a couple of minor hiccups when implementing the OptiPlex.

“You can have this happen with any product, but what matters is how fast you react to help,” Swenson explains. “Mazak has been quick to help us.”

Like Mazak, Action Mfg. places a lot of emphasis on creating strong customer relationships. With the Action Trackchairs impacting so many people, the company started offering tours of its facility.

“We have a lot of schools visit our factory,” Swenson says. “When the kids see the laser, they are floored. There is nothing like a Mazak fiber laser in Marshall. It’s a lot of fun to show people something like that.”

Since investing in its fiber laser, Action Mfg. also began work on new products. From accessories to additional wheelchair models, the company’s product lines are seemingly growing on a daily basis.

“We are now working on military robot options, like the Action Trackbot,” Swenson explains. “They can be used for target practice and surveillance possibilities. We also started to produce the ActionTrackporter thanks to our new Mazak fiber laser.”

Unfortunately, the Trackchairs are not yet covered by medical insurance. However, there are financial assistance options available. One option is possible thanks to Swenson’s wife, Donna Swenson, who is part of the Action Mobility Foundation that offers grants for partial payment of an Action Trackchair or Action Trackstander. The foundation was established to help individuals who have limited mobility due to paralysis, spinal cord injury, disease and other conditions that prevent full mobility.