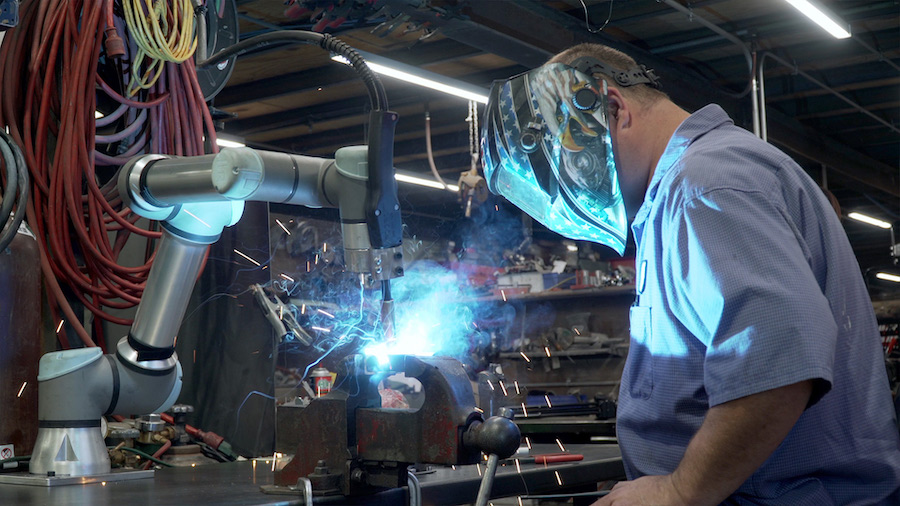 “When Zach came to me about the robot, I thought he was kind of crazy at first,” says Ashley Northway about her husband’s plan to buy a Universal Robots cobot for their family-owned machine shop in Northwest Iowa. Zach Northway, co-owner and lead project engineer for Flywheel Supply, had no background in robotics. But as Ashley concludes, “He just figures it out – and anybody can do it, really.”

That has certainly been the case with the UR5 cobot that Flywheel deployed for a randomized bin picking application for multiple machine tending processes and for TIG and MIG welding tasks. The UR cobot is easily moved between processes, and in the first few months, the company is already seeing productivity improvements that are expected to increase as the robot supports 24-hour operations.

Founded 15 years ago, Flywheel now has 15 employees in three buildings and produces about 29,000 unique metal parts for antique machinery, steam and boiler controls, valves and gauges for both industrial and government applications. The company processes raw materials into finished goods in its machine shop, then assembles, warehouses and ships products directly to consumers and distributors.

One of the company’s goals has been to automate to help compete nationally and globally, which is a challenge even with the low overhead and labor costs in the rural Midwest.

“Without some automation for long-term stability, it would be tough to maintain the efficiency that’s needed in a global marketplace,” Zach says. “By adding robotics and other automation, we’re able to keep holding our costs down long term, and the same number of people can get more done every day.”

Flywheel’s high-mix, low-volume production made automating a challenge, but was an ideal application for a UR cobot and the ActiNav UR+ application kit for flexible machine loading.

“The only way it made sense for us to put a robot on a machine tending application was to be able to do randomized bin picking,” Zach explains. “The cycle times on the machine are so short that if an operator has to stand there and line parts up in an organized fashion for a robot to pick them in a traditional sense, it would defeat the entire purpose of using the robot to begin with because it still requires an operator.”

In Flywheel’s ActiNav application, the UR5 cobot picks parts from a deep bin and places them in the jaws of a machine that indexes to multiple stations to perform multiple tasks such as drilling, chamfering, and internal and external threading. Ultimately, the ActiNav system will process as many as 1,500 different part numbers, so it must be quickly programmable to pick parts of different shapes, sizes and weights.

“The biggest advantage to ActiNav is that it can take randomization of parts being dumped in a bin, and as the bin gets low, a worker can just come by and dump some more into the bin and it will keep picking parts,” Zach says. “It doesn’t have to be reset or recalibrated or anything. It notices the bin amount changed and it keeps on going.”

One specific challenge at Flywheel is that parts are small and oily from the screw machines and other processes they undergo prior to the bin picking application. Adding a washing station would delay the workflow and add costs, so the company needed a robotic system that could pick and place oily parts into the machine, let them run and then remove them from another oily process before the parts are taken to a washing station. ActiNav does just this.

The UR cobot uses a vacuum gripper to pick up each part. ActiNav verifies pick success and the cobot presents the part to the integrated scanner to ensure that it is correctly oriented before placing it in the machine. Because the parts are oily and can easily shift position, ActiNav does validation checks throughout the routine to verify placement and make sure the cobot precisely hits the target in the angle and position required.

If the image sensor recognizes that a part has changed position, making it unplaceable, the cobot drops the part into a reject bin. During the course of the day, an operator empties the rejected parts back into the bin, where ActiNav can re-pick them successfully the next time.

“The biggest cost savings of the cobot will be that it can run lights out, 24 hours a day without stopping and, therefore, will be able to outperform a human who can only work eight hours a day,” Zach says. “And that one person that used to run that machine can now become a more skilled, higher paid, more diverse worker who can tend, program and fix robots; set up other machines; and maybe babysit a workcell with four or five applications when they used to only be able to handle one.”

With a fast-moving, high-mix manufacturing environment, Flywheel also has deployed the UR cobot without the ActiNav kit in TIG welding applications. Zach found the integration with

the TIG welder to be a straightforward process.

“One of the really nice advantages of the UR cobot and the software is you’re able to take a CAD file and output a G-code tool path like you would use on a mill,” he says. “The cobot follows that tool path and gives you really good, precise control over where your welds end up going on your part.”

“By creating multiple planes inside the UR cobot’s Polyscope software, you’re able to easily move certain features of your weld around to adjust and tweak, to dial in exactly where and how you want the weld to lay,” he says.

These parts were all manually welded in the past, and with Zach being the most experienced welder, the company co-owner often found himself taking on the job himself.

“Now, anybody in the shop can weld because of the cobot,” he notes.

With no background in robotics programming, Zach found the UR cobot’s user-friendly programming interface appealing. “It was very interesting to see that you could take just a point-and-click type of approach to a more complex type of problem,” he says. “Once the initial integration setup was done, we could literally set up a new job for welding or program a brand-new part that’s never been run before in as little as 10 or 15 min., depending on complexity and how involved it is.”

In the first six months, the UR cobot has welded tens of thousands of parts with no problems. Welding productivity has also surged.

“Prior to the cobot, we were averaging about a minute cycle time for a person to weld them manually,” Zach explains. “With the cobot doing the TIG welding, you simply drop the parts in the fixture, clamp it down and hit start, and it welds that part now in 14 sec. Our throughput is four to five times greater than having one person welding continuously.”

Flywheel mounted the UR5 cobot on a subplate and simply moves the lightweight cobot on a cart from one workcell to another. The subplate and dowel pins ensure that the cobot is precisely realigned for each machine so that fixtures don’t have to be changed and an operator doesn’t have to reteach the cobot, saving time between changeovers.

While Zach was able to integrate the cobot in-house, he has since discovered the full range of application kits, plug-ins and add-ons available through the UR+ ecosystem that he didn’t know existed when he got started.

“If I would have known some of those tools existed, we could have just bought the software and the calibration method for making redeployment easier and quicker, instead of having to build it ourselves,” he says.

In the next year, the Northways plan to integrate more UR cobots to automate multiple labor-intensive processes. With the cobots replacing mundane tasks that are hard to staff, workers can instead tend multiple automated jobs at the same time, for faster output and better quality.

Ashley says although Zach initially talked her into the cobot, she quickly realized that it saves the company time and lets any worker easily oversee the tasks the cobot takes on, without extensive training.

“We don’t need to train anybody, really,” she adds. “It’s just push a button and let it go do its job.”

Zach adds that he’d like to see three to four more cobots go into the shop to integrate the next machines down the line, so that as the product comes off of one machine, it can be handed down to the next machine and the next machine, and can become an assembled product and then maybe even packaged at the end. The total output at the end of the day would be much higher than having workers do each of those steps.

“Having the cobot has decreased back orders and improved the customer satisfaction because stuff gets done faster,” Ashley concludes. “I’ve had people call me on the phone and say, ‘Wow, I wasn’t expecting that. You said two weeks and here it is.’”