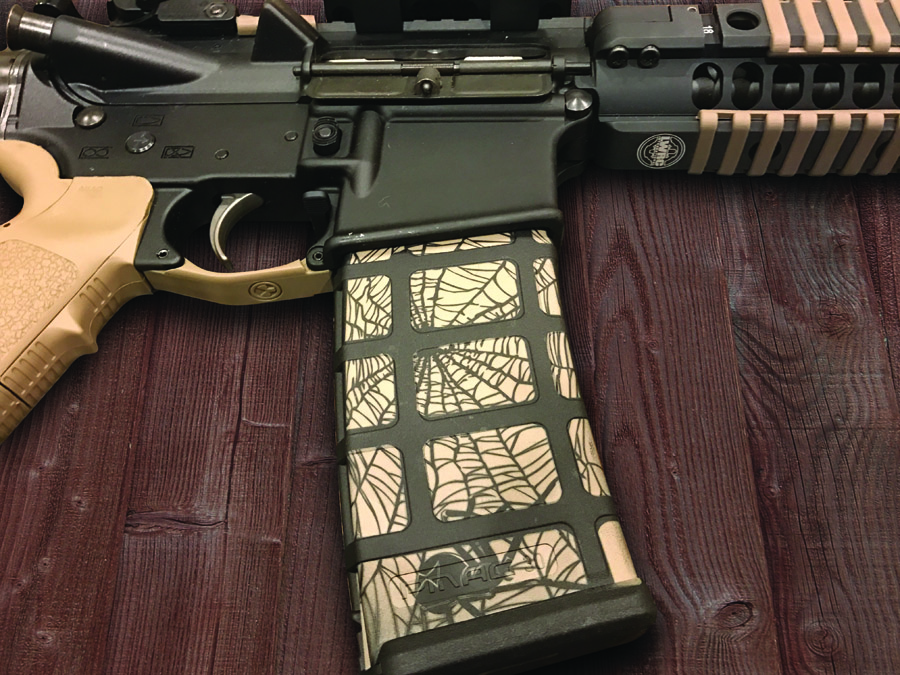 Gun owners have been adding personal touches with decorative artwork and embellishments to their guns since the development of firearms. In the 16th century, artistic efforts in marking firearms began to advance greatly.

“Before the mass production of firearms became commonplace, each gun was handmade and engraved with decorations or images on the metal of the lock, barrel and hardware of the gun. When Eli Whitney and Samuel Colt first began mass producing firearms, they continued the tradition by engraving the weapons with scenes such as stagecoach holdups and naval battles.

The ‘Golden Age’ of gun engraving is usually considered to be the second half of the 1800s. During this period, nearly all gun manufacturers created elegantly engraved firearms for their wealthier customers. American firearms engraving came into its own during this era, as it evolved into a large flowing scrollwork. Firearms engraving continued into the 20th century, when it began to decline. The years after WWII saw a renewal of the art of firearms engraving, and certain gunmakers, including Smith & Wesson and Colt, still custom-produce firearms for those wanting an individually engraved piece.” 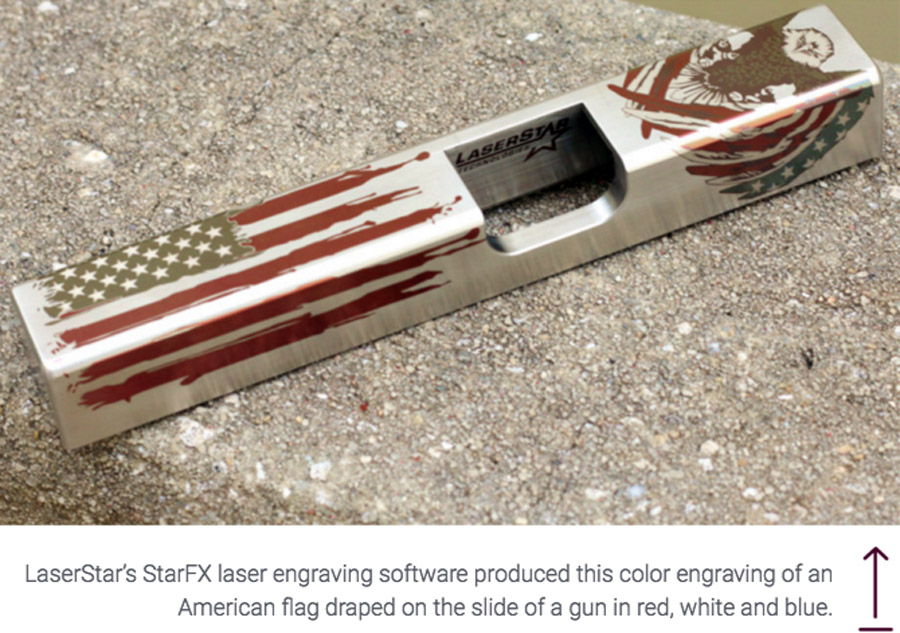 Laser engraving systems are used for serialization and customization of firearms, which has become big business in the manufacturing and retail markets, especially with the stringent government rules on gun serialization.

So, not only does the firearms industry rely on laser engraving technology for decorative purposes, but also for identification.

Laser system users include large firearms manufacturers as well as smaller firearms retailers and dealers, gun ranges, gun shows and some jewelers and private businesses, according to James Gervais, president and COO at LaserStar Technologies Corp.

According to the ATF Guidebook, licensed manufacturers and importers are required to mark firearms manufactured or imported with specific identifying information. This information is set forth in and must be in accordance with 27 CFR 478.92 and 479.102.

This information can go on the frame, receiver, barrel or slide of the gun. Engraving the lower receiver is usually the best option as the upper receivers can be swapped out without needing to re-engrave the piece.

For firearms imported after Jan. 30, 2002, ATF guidelines say engraving, casting or stamping (impressing) of the serial number must be to a minimum depth of 0.003 in. and in a print size no smaller than 1/16 in.

There is no minimum print size required for the other required information, other than it has to be legible and conspicuous “in a manner not susceptible of being readily obliterated, altered or removed,” Gervais says. 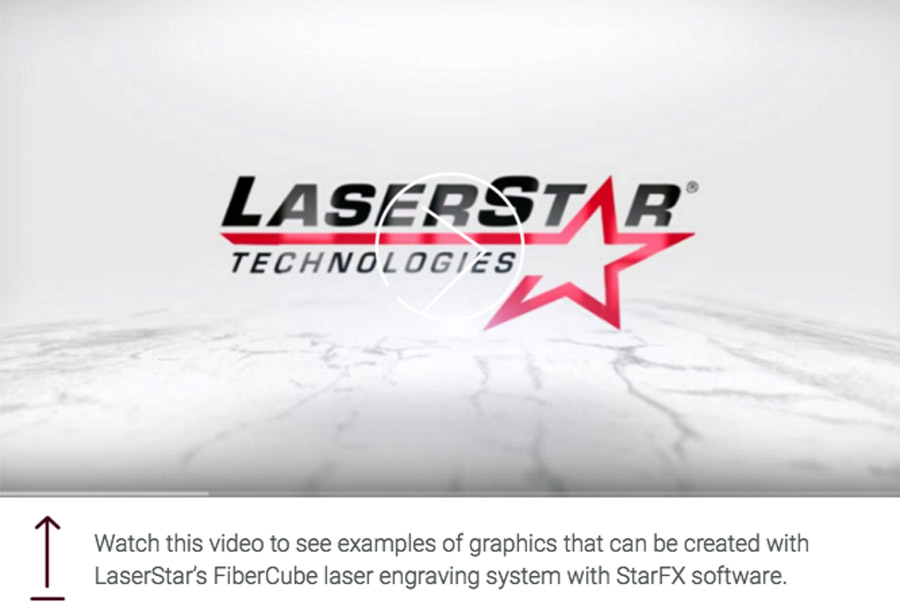 Laser is the way

When selecting a laser engraving system for marking firearms, it’s important to make sure it meets the ATF guidelines for depth and size requirements. Selecting the wrong configuration can result in the inability to meet these requirements. According to Gervais, LaserStar’s FiberCube laser engraving system can achieve the necessary size and depth.

“This machine is perfect for engraving firearms due to the very small and detailed engravings at depths up to 0.040 in. [1 mm],” Gervais says. “Also, the engravings can be completed very quickly depending on the size and complexity of the engraving. In addition to being faster, a laser beam is much smaller than a tool bit, so it also looks crisper and cleaner than traditional methods of engraving. This tool never wears out, breaks or becomes dull, causing improper depth or size.”

LaserStar’s StarFX laser engraving software was developed exclusively for the firearms industry through hundreds of applications and requests by manufacturers and aftermarket retailers. The software provides an easy-to-use, straightforward method to create graphics and visual effects on all types of firearms.

A variety of textures, depths and shadings from black to white are supplied in the standard package. The software allows the user to import an image from many graphics and CAD file types, then separate areas of the image into regions. Each region can then have a texture, depth or shading applied to it as easy as “coloring in a coloring book.” Patterns and effects are only limited by the user’s imagination.

With the recent introduction of LaserStar’s Color Effect module, some materials such as stainless steel can have actual colors applied in a paint-by-numbers method. Examples include the American flag draped on the slide of a gun in actual red, white and blue or the “Guns and Roses” image with actual red roses.

LaserStar’s FiberCube product line with StarFX software provides a safe Class 1 environment that requires no special protective eyewear or any other OSHA-type safety requirements. It is tabletop in size and plugs into a standard office outlet. It can also accommodate a range of available options or laser power levels (10 W to 100 W).

Three sizes are currently available, the original standard size FiberCube, the FiberCube Compact for smaller applications and the new FiberCubeXL for larger applications. They are all application specific and depend on the volume and size of the parts to be marked all the way to accommodating rifle barrels and receivers.

Operation is simple, too. A part is loaded into the system. If the programmable focus adjustment is available, focus is set automatically. Otherwise, it is manually set with the dual focus alignment diodes. The red laser trace feature draws a visible red box showing the location of the image to be lased. Either the part can be moved into that location or the location itself can be moved with the software (with the appropriate fixturing, no alignment is necessary). The safety door is then closed and the part is marked. 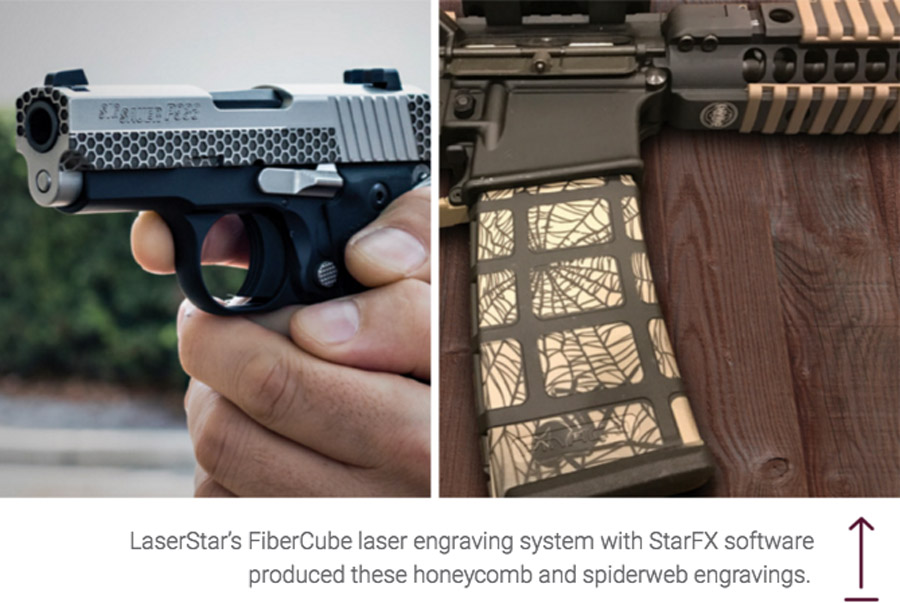 LaserStar also offers Class 4 laser engraving systems that are open systems, meaning they have no size restrictions, because they are not enclosed. This type of laser engraving solution is for small to large parts in job shop environments. However, companies using open systems need to have extra safety precautions available, such as eyewear and safety curtains, when using them.

Another option is the FiberCube laser engraving tower workstations that create a true production option. The tower systems are available in multiple body sizes, which are application specific depending on part size. 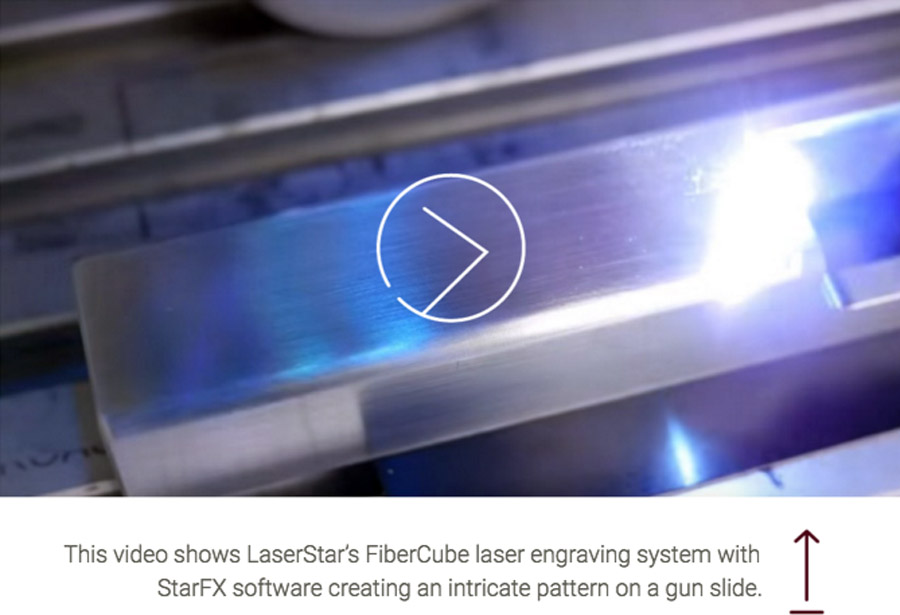 While all of these engraving products provide a perfect solution to the firearms and tactical weapon market, they are just as effective in any industry. Laser engraving is a great tool on many materials, including aluminum, stainless steel, titanium, copper, iron, brass, exotic metals and composites. Images can be engraved before or after custom coating (including hard coat anodize, custom color or Cerakote processes) to optimize the color fill, natural shadowing and polishing effects of the final result.

“While today’s firearms engravers have a variety of technologies to choose from, such as chemical etching, traditional CNC machining, stamping, pen stamping and others, none can match laser engraving for quality, versatility and ‘stunning effects’ with none of the disadvantages of tool wear and breakage,” Gervais says. “There is not a faster more cost-effective process.”