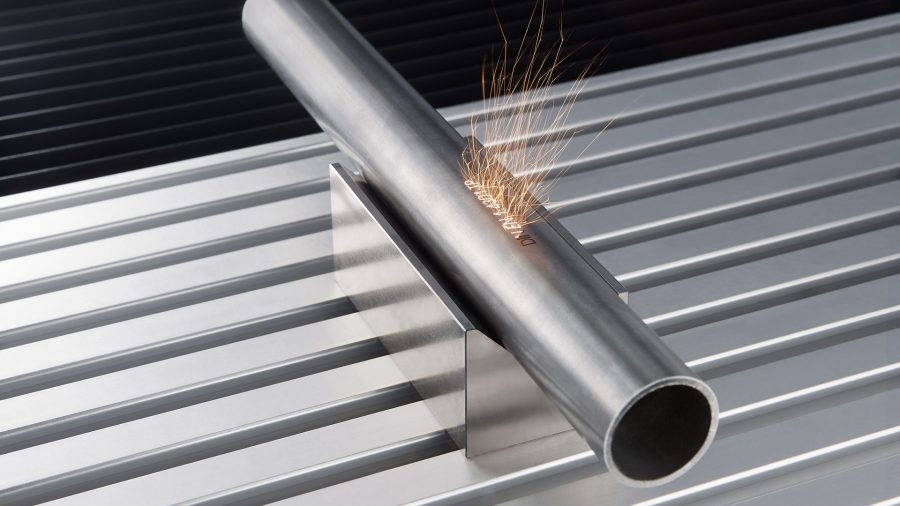 There’s no shortage of ways to identify machined and fabricated metal components. Bag and tag. Adhesive labels. Electrochemical etching. Rubber stamps and an ink pad. For those with a steady hand and good penmanship, there’s always the trusty engraving pen or even a black Sharpie. The problem with each of these methods is that they are either not permanent or are time-consuming, or sometimes both.

Imagine the ability to permanently mark part and serial numbers, logos, barcodes and artwork on practically any metal or plastic, and do so in seconds. It’s called a laser marker, and if your shop doesn’t yet own one, you’re wasting time and money. And for those who’ve already made that investment and are enjoying the benefits of laser marking, Clinton Coleman, product and project manager at TRUMPF Inc., will tell you it might be time to upgrade.

The reason is simple. As with all machine tools, laser markers continue to improve, as do the software and auxiliary systems that support them. TRUMPF is no different in this respect. Coleman points to the company’s new TruTops Mark 3D software as one example.

“Traditional laser marking software works perfectly fine on flat surfaces but is not so great on curved ones,” he says. “With TruTops Mark 3D, you can import a 3-D model, project whatever image you want to produce onto any freeform, spherical or angled part surface, and it automatically accounts for the distortion that would otherwise occur.”

Laser application engineer Dylan Hancock points to one recent application where a customer was using a rotary table and 2-D software to mark a series of circular bands around the periphery of a tube-shaped part. But because the software was unable to compensate for the laser’s constantly changing focal position throughout the part curvature, the operator was forced to program dozens of end-to-end linear segments that encircled the workpiece along with corresponding movements of the rotary table.

The problem, Hancock notes, were the small witness lines left between adjoining segments in addition to the time lost to repeatedly indexing the table and workpiece.

“Using TruTops Mark 3D, we were able to turn the 30 or so segments they were using into four equal quadrants,” he says. “Not only was the marking much faster, but part quality improved without any of the microscopic gaps they were seeing previously.”

This isn’t strictly about cosmetics, Hancock adds. If a laser strays far enough from its ideal focal position, it can actually begin to remove material rather than anneal it, damaging the part. What’s more, using 2-D software for 3-D parts is cumbersome at best, requiring no small amount of trial and error to achieve acceptable results.

Coleman agrees, explaining that TruTops Mark 3D is a fully-integrated software platform that automatically controls the laser’s positioning, focal length and operating parameters. It supports the most common CAD file formats as well as vector-style graphics such as STEP and STL. The programmer can either import these or create the 3-D model directly within the software, then “wrap” the desired marking onto the workpiece. There are also wizards available to walk operators through the most common steps.

TRUMPF has also introduced vision capabilities to some of its marking systems, both standalone, workstation-style machines and those that can be integrated into a production line. The VisionLine image processing system reduces and, in some cases, eliminates the need for fixturing by automatically recognizing and digitally aligning workpieces, even those sitting on a moving conveyor belt.

“This is our third-generation vision system and it’s by far the most advanced,” Coleman says. “We can detect parts and part features throughout a full 360 degrees of orientation. We can also read barcodes or check for OCR [optical character recognition] text and make processing decisions based on that information. Once the part is marked, we can inspect it and take the appropriate steps if it doesn’t meet certain predefined quality criteria.”

It works by first teaching the camera what to look for in terms of parts and part features, then storing that information in the system database. A company making scissors and pliers, for example, could then place a batch of parts on the machine stage or conveyor belt and have the system recognize the components, call up the relevant programs and mark the parts accordingly.

“We also have customers that affix temporary labels to parts, tell the system to read the label and then have it mark the part based on that input,” Coleman says.

Hancock notes that there are caveats: “As with any vision system, contrast and lighting conditions are very important. For instance, it’s more challenging to find a white part sitting on a light-colored background. It might take 300 milliseconds to detect it in this situation, compared to maybe 50 milliseconds with more favorable conditions. If parts are on a conveyor, obviously, this can have a significant impact on the processing speed.”

Of course, each of these advanced capabilities is secondary to the appearance and legibility of the marking itself. That brings us to the highlight of this particular part marking hit parade, the newly-introduced TruMark 6030, a machine that Coleman describes as the workhorse of TRUMPF’s extensive line of laser marking systems. “Most laser marker manufacturers, us included, use fiber lasers for their marking systems,” he says. “These provide high average power that’s ideal for material removal and deep engraving, like marking the VIN number on an automobile component. But they also allow the user to scale up easily when needed. If they can use a 20-W laser to mark a part in 10 sec., for instance, it’s fair to say they can move to a 50-W laser and do it in under 5 sec., and so on.

“The TruMark 6030, on the other hand, uses a Yb: YAG laser. This generates both high average power and high pulse peak power, the latter of which offers several advantages in marking applications.”

Hancock explains that producing “a nice, black mark” with fiber lasers on aluminum, brass, copper and precious metals can be challenging. The TruMark 6030 has no such difficulty. Nor does it struggle with stainless steels and carbon steel alloys, metals important to the medical and automotive industries, respectively. In either case, lasers with a nanosecond pulse duration heat the metal to just below its melting point, annealing it while creating a clearly visible oxidation layer. With stainless steels, at least, this can be achieved without destroying the metal’s natural passivity and, therefore, its corrosion resistance.

“A secondary passivation might still be needed for certain medical components, although we’ve done quite a bit of testing to create optimal parameters for passivation-resistant marking,” he says. “The 6030 also works quite well on plastics that have some color to them, such as PEEK, POM and polycarbonate. We can mark white or clear polymers, but it’s more of a foaming process, and we might encourage a customer that’s doing a lot of these materials to use one of our UV lasers.”

One such customer is Apollo Design in Fort Wayne, Ind., a manufacturer of equipment and accessories for the lighting industry. Facilities manager Ben Melvin was asked about the company’s experience partnering with TRUMPF and his thoughts on the new TruMark 6030 marking lasers that Apollo purchased.

“TRUMPF’s 3-D marking technology allows us to create diverse, accurate parts in a wide range of materials,” he says. “Our TruMark 6030 laser with mounted rotary axes has improved accuracy, while enhancing overall appearance and the quality of parts. As we face constant pressure to do jobs faster, more effectively and efficiently, the lasers help us meet our everyday production needs and offer the industry’s best-in-class solutions.”

Coleman summarized by saying that, while medical manufacturers are especially interested in the TruMark 6030, Apollo’s experience is hardly unique.

“While we’ve already placed a number of machines based on its capabilities with stainless steel and other medical grade materials, it’s far from a ‘medical only’ machine,” he says. “Its speed and flexibility make it very suitable for aerospace and automotive applications, as well as those found in general industry. As I said earlier, it’s a workhorse.”