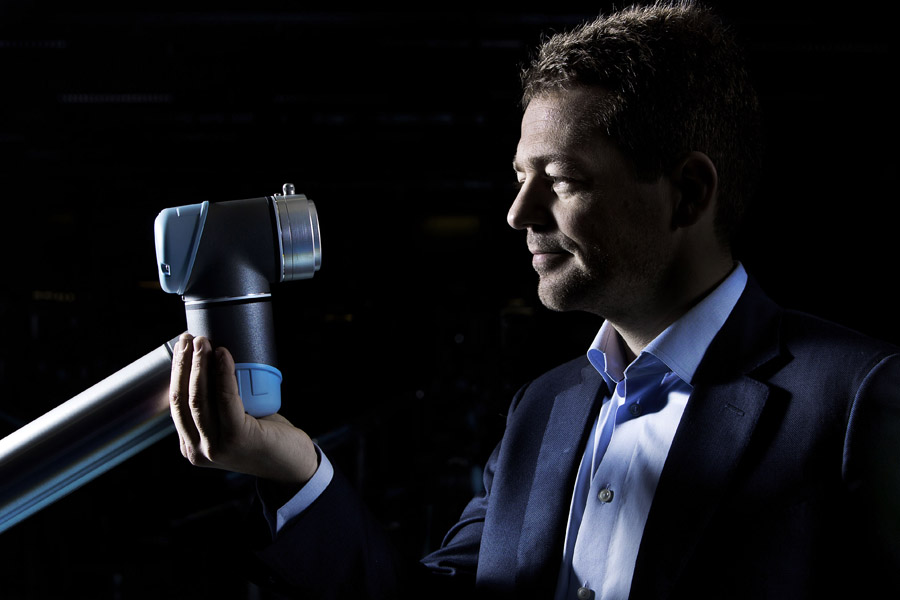 Each year, FAB Shop Magazine Direct has the honor of naming our Manufacturing Industry Person of the Year. And this year is no different. Well, mostly.

Every year, every month, basically every time you blink your eyes, the face of the manufacturing industry looks a little different than it did before. It is continually becoming more sophisticated and more tech-enabled. And that’s just the equipment.

The people that make up the industry are changing, too. With baby boomers on their way out of the workforce and into retirement, the youth of America is stepping up to fill their shoes. An unexpected demographic, however, is also changing the face of the industry: cobots.

Cobots, a type of robot developed to interact in close physical relation to human employees, are finally finding a permanent role on manufacturing floors around the globe. Much of their success – and widespread adoption – can be attributed to FAB Shop Magazine’s Manufacturing Industry Person of the Year: Esben Østergaard, the CTO and co-founder of Universal Robots.

Østergaard truly embodies the changing face of manufacturing. Still in his 40s, he is the type of leadership the industry will inevitably see more of: young, forward-thinking and ambitious. Østergaard, and those who follow in his footsteps, won’t look at manufacturing as it once was; they’ll see it as it can and should be.

In 2003, when Østergaard was a PhD student at the University of Southern Denmark, the country’s Ministry of Environment and Food presented the school with a challenge: automate its food industry.

One of the ministry’s main study participants, a Danish food manufacturer, needed to automate its cake production to stay competitive. When Østergaard first heard about the company’s operations, he remembers how odd it sounded for a traditional 1,000-lb. industrial robot to handle small cakes, let alone redeploying or reconfiguring such a heavy, hard-to-move piece of equipment for new product lines moving forward.

“In 2003, we were just a group of eight students at the university talking about and researching how robots should be in the future,” he says. “The Danish food producer turned out to be the perfect ‘ah-ha’ moment. We saw a need for something totally new and different, so after graduation, three of us wrote a business proposal and quit our jobs; we went all in.”

By 2005, the business proposal for Østergaard and his two co-founders, Kristian Kassow and Kasper Støy, resulted in the official founding of Universal Robots and an investment from Syddansk Innovation, a venture capital firm. By 2008, the first UR5 cobots were sold in Denmark and Germany. Today, the company boasts 60 percent of the global cobot market share as well as a 72 percent growth rate in 2017.

A short 10 years later and Østergaard was presented with the robotic community’s most prestigious honor, the Robotic Industries Association Engelberger Robotics Award. The organization attributes Østergaard’s role in the development of UR’s cobot arms as one of the most significant robotic breakthroughs in decades.

“It was challenging to accept such a huge award,” Østergaard admits. “But on the other hand, when we started the company, we were so ambitious. We really wanted to make a difference; we wanted to change what a robot is and should be. But even more so, we wanted to change how people think about manufacturing – going away from a low-cost, cost reduction way of thinking to a value-added, flexible way of thinking.”

Østergaard’s fresh approach to manufacturing has simplified operations for UR’s customers and along the way, he’s redefined the definition of a collaborative robot. Often times, cobots are defined as a robot that can safely interact in close physical relation to human employees. But for Østergaard, a cobot is much more than that. It’s, of course, a safe automation tool, but it’s also one that’s easy to deploy and redeploy.

“Because it’s so easy to program and redeploy, the safety aspect actually supports the other selling points,” he says. “The safety of it means that you don’t have to fully automate everything or totally reconfigure your shop floor to fit in a robot with a huge dedicated cell. You can automate more tasks than you’d imagine while still having a safe, functional and productive robot.”

Østergaard also says that the definition of a cobot should take into consideration the relationship that the human and the robot to collaborate in the same workspace. Instead of doing the same function side by side, the cobot can be helping the human.

“Instead of thinking about collaboration as the robot taking over the person’s job, we can think about the robot as a tool to do his work with him – even if the human isn’t standing right there in that same workspace,” he says. “The philosophy at Universal Robots is not to replace people with robots, but empower people with the right tools.”

“Traditional robots are these big machines behind fences that do the same work 24/7, years after year,” he says. “While lights-out, high-volume manufacturing is ideal for mass production, collaborative robots are part of a new paradigm where it’s lights-on factories. That means man and machine working together and retaining craftsmanship and manufacturing IQ on the factory floor.”

Østergaard’s vision to give small and medium-sized businesses automation that previously had been beyond their reach goes far beyond the robot itself. He also innovated the way in which his customers could interact and benefit from one another. Similar to trends in crowdsourcing, Østergaard’s UR+ program

leverges the company’s innovative global ecosystem by enabling third-party developers to create products – such as  grippers, vision systems, software and other accessories – that are certified to work seamlessly with UR cobots. The UR+ showroom now includes around 130 certified UR+ products and around 390 approved commercial developer companies in the UR+ developer program.

“We created a very open ecosystem, which was identified as a need early on,” Østergaard explains. “When we first started selling our robots, we could see that our customers were reinventing the same solutions independently of each other again and again. As an example, we had one customer implementing a robot in a biohazard lab and another one trying to put one in a nuclear lab. They both wanted to joystick the robots with a USB camera, which they developed independently of each other. Seeing that, we knew how much they could benefit from talking to each other, so we created a marketplace where they could share their ideas.

“The UR+ platform has really taken off, due primarily because of the nature of our cobot’s universal arm,” he continues. “There are so many things an arm can do. Because of the vast opportunities the arm provides, we knew there was no way we could break into all industries, all applications and all types of processes without having an open ecosystem.”

Customers can capitalize on the developments that have already been established and, furthermore, those developments become better tested in shorter time frames. By participating in the forum, customers also gain direct contact with expert peers that can answer questions, provide technical support or even collaborate to develop new innovative cobot solutions.

Ringing in a new era

For a new company introducing groundbreaking technology, there are always a notable series of “firsts” that serve as milestones. For UR, that, of course, began with the development of the first user-friendly, sophisticated cobot featuring an intuitive tablet interface. But it also includes having one of their products, the UR5, ring the closing bell at the New York Stock Exchange (NYSE) in October.

The brass bell at the NYSE has been a fixture since 1903 and rings at the opening and closing of the day’s trading. While the first guest invited to ring the opening bell was Leonard Ross in 1956, a 10-year-old child prodigy who had won a television quiz show answering questions about the stock market, it should come as no surprise that after all that time, a robot would be given the chance, as well. Østergaard, perhaps more than most, understands the merging lanes of humans and robotics.

“The story behind humanity is a story of technology,” he says. “In a sense, technology is what makes us human, considering we’re the only animal on this planet that uses technology. We do it so successfully, in fact, that we hold the fate of the planet in our hands – simply through the way in which we choose to use technology.

“When you think about it, technology enables us to do more with our time and energy, and it empowers us to do more than we would ever be able to do with our biology alone,” he concludes. “Essentially, we stopped evolving genetically some hundred years ago. So today, our evolution isn’t through our genes, it’s through technology.”