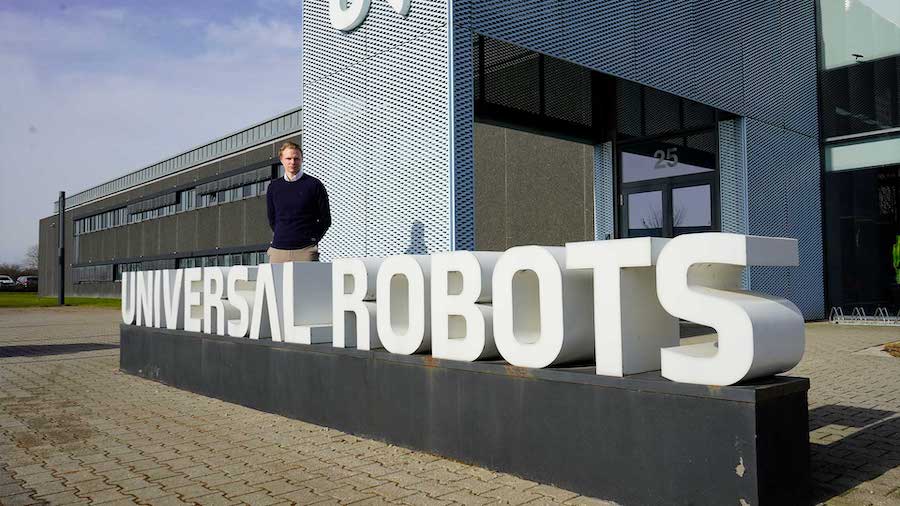 Kim Povlsen, the new CEO of Universal Robots (UR), is incredibly passionate about technology. As a robotics engineer hailing from the University of South Denmark – where the founders

of Universal Robots also graduated – he can program one of his company’s collaborative robots, or cobots, in his sleep and with his hands tied behind his back. He’s quick to remind others, though, that this is no special feat, considering ease-of-use is the name of the game at UR.

Post-graduation, Povlsen says there were a lot of robotic engineers, but not a lot of robotic jobs to get, so opportunity led him across the pond to Rhode Island to American Power Conversion, now known as Schneider Electric, an international powerhouse that provides customers with energy and automation solutions. The company hired him as an engineer and then promoted him multiple times because of his unmatched belief that he could solve customers’ problem if given more access to them.

Being with the company for 13 years and wearing a number of different hats prepared him for the exciting world of collaborative robots – that and his second passion in the work world: delighting customers.

And yes, delighting customers is exactly how Povlsen puts it. In everything he currently does at UR and in every role he had at Schneider Electric, the overriding goal is to create phenomenal experiences for anyone and everyone using the products he and his teams create. When customer satisfaction is the main motivator, everything else falls into place.

“Schneider Electric is a big company with somewhere around 150,000 employees,” Povlsen says. “I started out doing hardcore engineering for about four or five years and always found myself being astonished by how little interactions the engineers had with customers. Engineers are here to solve problems, but how do we know what their problems are if we never get to interact with them? At some point in time, the company got sick of listening to me, so they promoted me to a product engineer.”

With this new direct line of communication to talk to customers, Povlsen was able to actually solve their problems with his engineering skills. He learned how to best interact with customers and build business models around the new products they would need.

The final project at Schneider before being named as UR’s new president was running the technology and corporate strategy for Schneider’s largest business unit, which was valued at $30 billion. Povlsen attributes those experiences as the learning opportunities that prepared him to take on a global company like UR. Operations at UR, however, aren’t exactly typical.

“Even though we have 700 employees across the globe, we still act like a startup with fast iterations and big company moves,” he says. “Mixing those two things is super exciting.”

Universal Robots’ rise to success has been fast and unprecedented. Since launching, the company has sold more than 50,000 cobots, which is half of the cobots that have been sold in the world to date. As the new president, Povlsen is taking advantage of the momentum that started in 2005 when the company first opened its doors.

“Today, the goal for me and for Universal Robots is to try and create a world where people work with robots, not like robots,” he says. “We want to transform how work is done in manufacturing, but we want to make sure that becomes even more true than it is today.”

The way to do that, he says, is – as has always been his mantra – to put an extraordinary focus on customers. A company can put brilliant technology on the table, but if the customers aren’t successfully using it, then what’s the point?

“That’s where the partnerships and ecosystem come into play,” Povlsen says. “And that’s why we’re focusing on making our product become a platform – to really help the customers navigate through the process of using this type of technology. A cobot is a big part of the solution, but not all of it.”

Developing a user-friendly platform around a product requires a lot of work from a technology perspective, but it also requires strong partnerships. In that regard, UR released its UR+ platform, which provides users access to a collection of peripherals and application kits that is highly reliant on the company’s growing well of partners and collaborators. To date, the UR+ platform boasts more than 300 partners with 700 distributors and integrators taking advantage of their work and insight.

“We have all types of customers, but the focus of our efforts is on the SME space,” Povlsen says. “When an SME wants to automate machine tending, they obviously have an intimate understanding of their problem. They know the particulars of the machine they need to automate and the size of the parts they’re working with. They know the things they need to know. So, when they join the platform, we can guide them through the menu process by asking them a couple of questions based on the things they know. This is how we can help guide them toward a solution.”

He likens the experience to Airbnb where producers and consumers help each other and, in turn, strengthen the platform. Keeping this successful model in mind, Povlsen and the team at UR are trying to figure out how to better link those two groups together to create a seamless experience for those getting started with cobots.

“When you take on this type of mission, you need to make sure that systems are interacting properly, make sure you have the right APIs and that you are creating something with your partners that works well together,” he explains. “It’s something that we’re spending a lot of time on. We’re trying to lower the bar for what customers need to do to meet their cobot expectations.”

Beyond the goal of building a robust product platform, the overriding question is what’s on the horizon for Povlsen and the cobot revolution in general. In terms of the top trends that the

industry should expect, Povlsen says his company is seeing a lot of trends focusing on applications.

“Application wise, we announced the first welding application in North America four years ago,” he explains. “That was the starting point. Nobody thought that was realistic, but truly, we can do so much more. Solution providers and OEMs are taking the cobot and building more standard solutions around it. It’s fast-growing.”

From a philosophical and societal standpoint, a growing trend that Povlsen felt inclined to mention is the changing nature of work that humans are willing to do. And it isn’t necessarily based on new technologies, but the journey of society instead.

“Employers had to lay people off during the pandemic, but now that they’re trying to bring them back, those employees aren’t interested in doing that same work,” he says. “When these employers bring robots into their facilities to do the most repeatable tasks like machine loading and pick and place and then upskill the people that had previously been doing that work, those employees will be more apt to come back to work. What a great trend.”

In terms of the untapped opportunities for cobots and the manufacturing industry as a whole, UR is conducting global-wide analyses of emerging markets. In particular, the company is researching the “automatable jobs” and how UR can help.

“What we’ve learned is that we have barely scratched the surface on what can be done,” he says. “Take just the United States as an example. Our analysis shows that in the United States alone, there are 6 million automatable tasks, and these are specifically ones that fit well with cobots. Considering we’ve delivered 50,000 units to date, and there are 6 million automatable tasks just in the United States, there’s a long way to go. But it’s also fair to be said that not all of these tasks should be automated even though they can be. A lot of them will be, and that’s the beauty of this technology.”