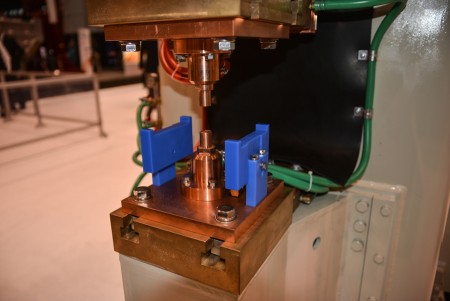 When the first wave of lean manufacturing crashed on America’s shores, makers of all shapes and sizes began looking at their operations in a different way. Slowly but surely, fabricators and manufacturers adopted the central idea to the lean philosophy: making obvious what adds value by reducing everything else.

What started as a method to reduce waste in Japanese manufacturing facilities has today almost become synonymous with “being competitive.” Nearly 30 years later, products and services are still being developed with a lean way of thinking in mind.

One new piece of equipment that hits on many of the major points defined by lean is the Flexwave Resistance Welder, which features the equipment manufacturer’s proprietary waveform technology. Resistance welding, which is popular with automotive makers and a variety of manufacturers wanting to bond parts or apply nuts without the noxious fumes associated with other welding processes, uses an electrical current to join metal parts together. The parts can be welded leveraging the heat produced as the current passes through them.

Manufacturers that invest in the technology will see the cost of their overhead decline while simultaneously seeing the quality of their operations rise – an ideal example of lean manufacturing. And like lean manufacturing, the maker of the Flexwave, Dengensha America, finds its roots in Japan.

The Flexwave Resistance Welder and corresponding flexible waveform technology are able to produce desirable outcomes thanks to the combined capabilities of a capacitive discharge (CD) welder and a 15,000-Hz bipolar medium-frequency converter. Because the electrical current flow can be better managed, a reduction in thermal distortion can be realized.

“The higher currents are available because of the stored energy in the capacitor banks,” says Bob Donovan, an electrical engineer at Dengensha. “The Flexwave requires the same amount of energy as a standard arc welder to operate in an industrial environment. That translates to about 480 volts, three phase, or about 15 amps supply, which is nowhere near the couple of hundred amps that a standard pedestal welder might need.”

Donovan explains that with a capacitive bank buildup, the bank can rectify the power and then step it up to as much as 700 volts. That in itself allows the machine operator to get higher currents. In the case of the Flexwave, it can develop 150,000 amps for one cycle, which could roughly add up to 17 milliseconds. Operators can then utilize combinations of that usage to get the desired weld current and time they need.

High strength steel – with its high carbon content – is a great example of how the Flexwave can benefit a host of manufacturers. If an operator were welding, spot welding or even projection welding HSS, the material would have to be quickly heated to a high level.

With conventional-type welders, AC welders and even mid-frequency DC welders, the carbon content can start to crystalize if it takes too long to reach the desired temperature. From there cracks can form, essentially producing a failure in the weld. Resistance welding with the Flexwave, on the other hand, heats the material up extremely fast, thereby preventing failures.

“Aluminum follows the same basic scenario of HSS,” Donovan says. “You have to hit it hard with high currents for a very short period of time. With the Flexwave, there’s barely any heat generated to distort the material or discolor it.”

The same holds true for resistance welding of mild steel, high-tensile steel, stainless and dissimilar metals. Donovan says that tests were successfully conducted welding copper and brass together with the Flexwave and that the company is currently looking at applications with aluminum and copper. Dengensha will also take customer requests for other material mixes to run tests and determine whether welding with the Flexwave is viable.

Less energy usage and heat input are just the tip of the iceberg when it comes to material processing on the Flexwave. The consistent production of high-quality welds is also an attractive factor.

“Weld repeatability is probably one of the greatest benefits,” Donovan says. “In the past, other welders didn’t work on a capacitive discharge bank. The power would be triggered right off the AC line. In those cases, you’re subject to abnormalities on the power line, like dips or surges in voltage. With the capacitive bank, you basically have a battery at your disposal where nothing can influence it.”

He continues by explaining that “you can take what you want from the battery in any fashion that you want it, and you can then restore it back to the fully charged battery while you’re completing other processes. Power-line disturbances will no longer affect the welding process.”

Additionally, the technology that powers the Flexwave provides users with direct-current configuration of weld current values, which makes it easier to set parameters. The Flexwave technology also maximizes waveform flexibility, which allows necessary parameter settings such as tempering, demagnetization and upslope.

“One of the things we talk about at Dengensha is the simplicity of changing parameters,” Donovan says. “With the older CD welders, you had to set a voltage level on the capacitors, which was rather cumbersome to understand. Whereas with this unit, you enter the current value, time and force that you want and the machine does the rest, which is much easier and more understandable to use.”

Furthermore, the Flexwave’s setup is similar to a standard pedestal welder in regard to terminology and error diagnostics. Considering the new generation of welders entering the workforce, the simpler it is to operate the better.

“Even from a point of maintenance, the engineers at Dengensha want things to be easy to understand,” Donovan explains. “To speed up the learning curve, Dengensha will also come into a facility to conduct tutorials with the equipment operators. Dengensha’s motto is to go beyond the expected and give customers the best possible service available.”

Flexwave waveform flexibility also provides users of single-phase AC welders the option of replacing their existing controller unit with a Flexwave controller, which enables customers to use it as a Flexwave welder, as well.

The Flexwave series of equipment includes the NICP-050, NICP-100 and NICP-150, with respective weld currents maxing out at 50,000, 100,000 and150,000 amps. The equipment can be purchased as an off-the-shelf solution – a welcome alternative to many resistance welding solutions that are typically engineered from the ground up to meet specific customer needs.

From Toyota to today

When John Krafcik first shared the idea of lean manufacturing with the world in his 1988 article “Triumph of the Lean Production System,” he was reporting on his time spent as a quality engineer at Toyota. That article began the lean revolution and eventually led to a multitude of tools and methods to help manufacturers identify and eliminate waste.

Today, Dengensha’s Flexwave can be considered among those tools. Coincidentally, it’s finding favor with automotive manufacturers and others, such as electronics and furniture manufacturers. For automotive applications, it has proven beneficial for the production of components for the engine and motor as well as for the car’s body. It’s also effective in the production of transmissions.

“Companies like Harley Davidson make their own transmissions for the motorcycles they produce,” Donovan says. “The aluminum plates on the shaft of the transmissions are a perfect example of where the new welder will be of interest.”

“The concept emerged in his spare time, and low and behold, he came out with a design that worked rather well,” Donovan says. “It was initially introduced in the Japanese marketplace and quickly garnered a positive response.”

At the time of its release, there weren’t a lot of capacitive discharge welders being used in the United States. Although there were some, the Dengensha engineer’s idea was ahead of its time. Donovan says what makes it so inviting in today’s market is that it can address some of the different and new materials that are now being welded.

“Dengensha’s philosophy is simplicity through standardization,” Donovan says. “The company’s standard pedestal welders are very intuitive and that concept was carried over into the Flexwave. If people don’t understand it easily, you’re going to have problems.”

Likewise, when electrical currents are dipping and spiking during resistance welding operations, problems ensue. Manufacturers end up with high utility bills and, even worse, low-quality, inconsistent products. The Flexwave removes that waste, enabling even greater lean operations for those who choose to adopt it.