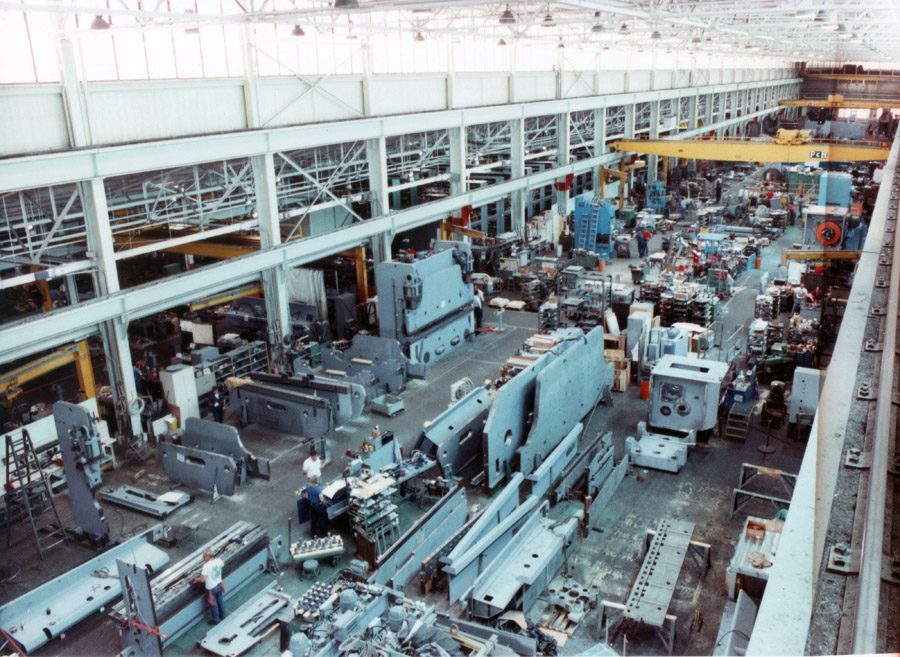 Like much of the United States during the turn of the 20th century, the city of Cincinnati was booming. Its population had hit 325,000, maintaining its position at the time as the densest in the nation and among the United State’s 10 most populous cities. More than a dozen railroads connected Cincinnati with the rest of the country, aiding in its status as an industrial and political powerhouse.

Throughout its history, several world-class companies planted roots in Cincinnati. In 1837, Procter & Gamble got its start. In 1858, Macy’s followed suit. Kroger emerged in 1883, and 15 years later, a company notable to the metals fabricating industry settled in the city’s downtown.

That company, The Cincinnati Shaper Co., better known today as Cincinnati Inc., built its reputation on three guiding principals: innovation, performance and endurance. With more than two dozen patents, 120 years in business and a fourth generation family majority ownership, it is clear that those founding principles are still a driving force to the company’s success.

Founded in 1898 by Perrin March, shaper machines served as the primary product line for the company through the 1950s. As improved technologies and methods of machining emerged, however, the company gradually phased out its mainstay product in favor of newer, more innovative metalworking equipment, such as lathes and machining centers. After moving to its current location in Harrison, Ohio, and restructuring its product lines, the company changed its name to Cincinnati Inc.

“CI has always been a company leading the industry in innovations,” says Carey Chen, president and executive chairman. “The introduction of the shaper and its evolution was proven through widespread industry adoption including the U.S. Navy, which in World War II equipped every large U.S. marine vessel with a shaper in its tool room.”

But the manufacturing and metalworking world was already changing. In the 1920s, the machinery used in metal fabrication no longer utilized the technology found in the shaper, such as the machine’s drive system.

“The March family saw an opportunity to apply this technology to brake presses, as they were named at the time, leading the company to introduce the first mechanical ‘press brake’ with a fly wheel and clutch drive system,” Chen explains. “This type of machine was an innovative introduction into the metal fabrication world and that machine design continued through the 1970s where it was eventually replaced by hydraulic press brakes.”

As CI had seized the opportunity to improve press brake operations, it also saw an opportunity to improve a key counterpart to those bending operations at the shear. CI determined that the shear, which was the primary machine at the time used to cut metal to size, took too long to set up, only cut one piece at a time and was in desperate need of a drive system. In fact, CI’s determination to apply the drive system methodology from the mechanical press brakes to the shears gave way to the first ever mechanical shear in the late 1920s.

“To this day, CI still offers a mechanical shear with design origins that date back to its inception,” Chen says. “The introduction of the mechanical press brake and shear thrust CI into the metal fabrication industry, which ultimately is where the core of its business revenue came from and continues today.

“In the mid-1980s, CI explored diversification with plans to introduce a CNC punch press to complement its press brake and shear product lines,” Chen continues. “An independent firm was hired to survey the industry to capture the voice of the customer. The results of the survey indicated that the industry wanted a machine with lower setup, reduced operating costs and higher productivity. It would have been difficult to evolve an already mature product like the punch press, so CI’s solution was CNC laser cutting.”

After several years of development, CI’s first laser was introduced in 1987. At that time, the CL-7 CNC laser cutting system was unique as it was the only laser of its kind built with dual pallets, flying optics and integrated controls with the laser resonator. These features offered the productivity, accuracy and reduced setup that the industry had requested.

Later, in 1995, CI introduced the first-ever linear motor-driven laser called the CL-707, which further addressed the requests of the industry, causing them to become widespread. As the CL-707’s high speeds closed the gap between laser cutters and punch presses, other laser manufacturers of the time followed suit by incorporating similar features into their own laser cutters.

In its 120 years of operation, CI has shipped more than 50,000 machines and during that time, established a modern 500,000-sq.-ft. plant and technical center just 30 min. outside of its original home in Cincinnati. Throughout the years, the CI product catalog has expanded from shaper machines to press brakes and shears to full laser cutting systems, plasma tables, automation solutions, powder metal presses and additive manufacturing equipment. It has also established a Gold Partner program to complement its metals fabricating equipment with effective, proven software.

“Forming strategic partnerships is common in companies, but CI’s Gold Partner program is unique for a machine tool builder in our industry,” Chen says. “The program requires a vendor to achieve specific, measurable milestones to prove it can successfully interface with a CI machine, and they must maintain that status annually.”

CI currently has three Gold Partners: Sigmatek, Metamation and ProNest. The value it represents to a customer, should they choose to purchase these products to program a Cincinnati machine, assures that the product was thoroughly tested, validated and approved by CI.

“It offers confidence and, most importantly, out-of-the-box productivity that the software solution is optimized for a CI machine,” he continues. “The Gold Partner program and concept can extend to other vendors (partners) outside of software and we are exploring the use of that methodology with those companies.”

For many customers, purchasing confidence also comes when a product is made in America. Since its inception, CI has produced all of its products stateside, but recognizes there is much more to quality than where a product is made.

“We realize that ‘Made in America’ does not earn CI business on its own; it simply reflects our proud heritage earned over 120 years in business,” Chen explains. “We are manufacturers building machines for manufacturers here in the United States, and that helps us identify with our customers and vice versa.

“However, we never want to lead with the “Built in USA” statement or rely on it as a reason to buy from CI,” he continues. “To compete, we must offer the most innovative, quality machines in the industry, backed by unmatched service and support. By striving for that, we earn our customers’ business and hope they feel good that they bought from an American owned company.”

“CI has been a company of ‘firsts’ throughout its history,” Chen says. “The most recent addition to those firsts was in the area of additive manufacturing. In 2014, through a collaborative effort with Oak Ridge National Labs and Local Motors, the world’s first 3-D printed car rolled off the showroom floor of IMTS 2014. That sparked many other firsts in the newly emerging big-area additive manufacturing market.”

Complementing the company’s 3-D initiatives, CI made its first acquisition in New Valence Robotics, a manufacturer of 3-D printers that feature automatic part removal and cloud programming. In-house, CI produces its BAAM, MAAM and SAAM equipment, standing for big-, medium- and small-area additive manufacturing, respectively. Its inroads in additive have resulted in numerous awards for innovation.

Additional awards also speak to the company culture at CI, such as the back-to-back inclusions in Ohio Business Magazine and Cincy Magazine’s lists for “Best Places to Work.” Chen attributes the company’s attractive culture to its family heritage.

“The company still continues to operate as a privately held company today,” he says. “It’s common to see employees retire with more than 30 or even 40 years of service. Additionally, the legacy of families at CI does not end with the March family. We currently have active employees whose father and grandfather are employed or who worked at CI their entire career.”

CI’s anniversary serves as an important milestone to reflect on its past, present and especially its future. As it’s always been, the company is committed to its employees as well as its customers. It has strategic plans in place to strengthen its core products, introduce new products and increase sales through focused aftermarket programs and a growing international customer base.

“Trends in the marketplace, including low unemployment and the pressures of creating higher productivity, will shape the direction of our innovation efforts going forward,” Chen says. “Clearly, there is an increasing market push for analytics, automation and additive manufacturing. Development plans for future products and services will focus on these key arenas as well as our commitment to providing solutions to our customers even better than we do today. The work environment continues to move at an energetic pace, yet we will still strive to maintain a family culture work environment and remain privately held.”