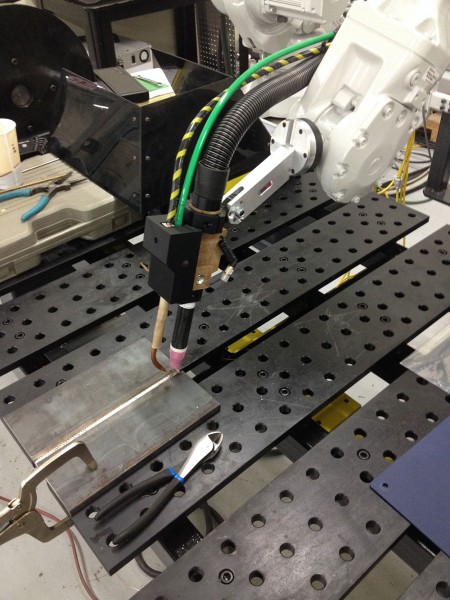 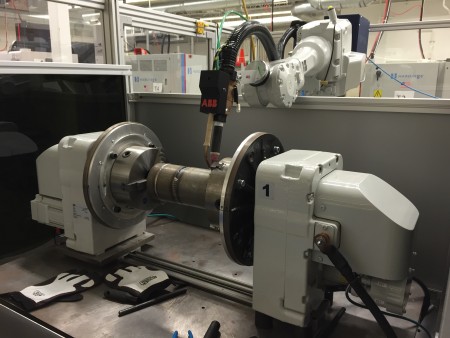 Fussy, slow and expensive – those are just a few of the unfortunate modifiers associated with robotic TIG welding. Manual TIG, too, is often slapped with similar labels, such as “difficult to master” and “low output.”

Regardless, TIG stays in high demand because it can handle more alloys than any other welding process. Its aesthetically superior welds also contribute to its popularity, as does its inherent ability to produce minimal fume emissions, sparks and slag. Therefore, many in the industry have lamented the fact that TIG welding and robotics have historically been a difficult match-up. Until now.

A new collaboration from ABB Robotics and Tip Tig USA is changing the mindset of how manufacturers can join traditional steels, aluminum, stainless steel and exotic alloys in an automated setting. They’re doing so by promoting a new welding process that shares some of the qualities of MIG welding, such as speed and ease of use.

The Tip Tig process itself is key for successfully adapting TIG for automated operations. The enhanced welding method is made possible thanks to a patented wire feed technology that creates a vibratory effect on the wire in addition to applying a hotwire current to the filler metal prior to entering the weld puddle. The mechanical action agitates the molten weld pool and disrupts the surface tension, positively changing the weld dynamics.

“Agitating the weld pool comes with many bi-products and benefits,” says Mark Oxlade, arc welding manager at ABB. “It helps to wet the walls of what you’re welding. Compared to a traditional TIG process, which doesn’t do that as well, it’s incredibly beneficial. The agitation of the weld pool relaxes stringent fit-up requirements demanded by traditional TIG.

“The overall Tip Tig process also allows you to go faster than traditional TIG,” he continues. “You can travel along the product faster, which means lower heat transfer. Furthermore, the agitation of the weld pool pulls the gases and particulates out to make a cleaner weld. These are all big pluses that combine to be the magic dust we’ve been looking for to do automation. It truly opens up the market for what users can do.”

The result is a high-quality weld that exhibits high deposition rates, low heat input and the lowest possible hexavalent chrome emissions when welding stainless steels. In fact, the hexavalent chrome fumes associated with the Tip Tig process have been measured as “undetectable.”

If something sounds too good to be true, it probably is. And that’s what was going through Oxlade’s mind when he first learned about Tip Tig. He came across the process as he was doing research, and the predictions being made about it prompted him to canvass some of its current users to find out if the process was all it was cracked up to be.

What he discovered was promising. Customers talked of increased fluidity of the weld pool, greater tolerance to joint fit-up, greater ability to accept more wire into the weld pool, travel speeds up to 6 times faster than traditional TIG and the ability to mobilize particulates and gases for a cleaner weld. Most importantly, customers talked about the reduced heat input and improved thermal impact on the parent material. Weld stress had been reduced significantly.

So it came as no surprise to Oxlade when he also learned that the Tip Tig process had been awarded the accolade of the “most innovative new welding process” in Essen, Germany, at the world’s largest welding and cutting exhibition, Schweissen & Schneiden, in 2008. Invented by Siegfried Plasch, an Austrian weld engineer, in 1999, Oxlade was surprised that it had flown below his radar for so long.

Shortly after Oxlade’s discovery of Tip Tig in 2013, the two companies began a collaborative relationship. It kicked off after some side discussions in November of that year, and by early 2014, it started to take shape with successful robotic testing and integrations.

The initial tests performed by the two companies sought to answer the question of whether robotic Tip Tig could outperform robotic MIG operations. The process required some changes to go from a manual to a standard robotic interface, such as making modifications to the welding torch to offer more capability in the wire feed delivery, but once it was fully outfitted for automation, the proof was clear. Robotic Tip Tig was a formidable rival to robotic MIG.

When performing lap joint trials on stainless steel 304 at thicknesses from 1 mm joined to a 12.5-mm bar, the Robo-Tip Tig was able to achieve wire feed speeds of 330 ipm as well as travel speeds of 58 ipm. Its deposition rate came in at 6.4 lbs. per hour, running on 12 volts and 275 amps.

The impressive numbers seen during the stainless steel tests were a direct reflection of what Tip Tig had also achieved when welding exotic alloys. The low heat-affected zone also carried over to the robotic tests. When working with exotic alloys and materials such as high stainless steel, chrome, Inconel, titanium, nickel and copper, controlling heat is a key factor.

“Different processes control the heat by pulsing an arc, which doesn’t give you the increases you need in deposition or travel speeds,” says Juvenal Calvo, an application engineer at Tip Tig. “With our process, we’re able to go two to four times faster. When it comes to controlling heat, a lot of the materials that have trouble with it are those exotic alloys.”

Industries that could benefit most from the Tip Tig process include the oil and gas, aerospace and automotive industries. But that’s just scratching the surface. The list of current users of Tip Tig is long with Westinghouse, Exxon Mobil, GE, Siemens, Emerson, Caterpillar and Kiewit as just a few examples.

Hang Li, a principal engineer of the materials and joining center at Siemens’ gas turbine plant, says the Tip Tig process has replaced several manual TIG operations and that the company is pleased with what it’s been able to achieve.

“The Tip Tig process delivered all of the advantages that the OEM promised and even more,” he says. So much so that “we believe there is a need to adapt the process for robotic applications for precision and persistent control over delicate welding tasks.”

For manufacturers looking to automate their welding requiring high quality and high performance, Tip Tig has proven to be an effective choice. The company – in coordination with ABB – works with customers to determine the best robotic setup that will take their once slow and fussy TIG work to a streamlined and efficient level.

Click here to Watch the Tip Tig process in action!