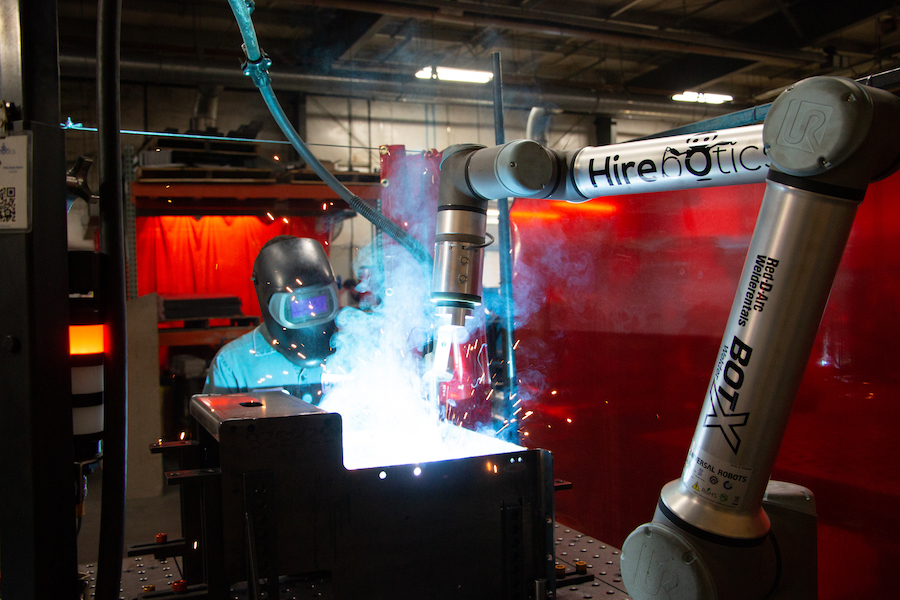 Today’s weld shops are caught between a rock and a hard place; they can’t find enough skilled welders to hire, and they can’t automate their increasing numbers of high-mix, low-volume production runs with traditional welding robots.

Traditional robots in welding applications are rigidly mounted to a workcell purposed with a single task, which it can rapidly and consistently repeat for its entire lifecycle. That task can only change by halting production to retool, recalibrate and reprogram the robot. Welding firms sink as much as $200,000 into these automated workcells that weld, fixture and assemble large production runs.

Beyond the hardware costs, these shops must invest in programmers, engineers and robot technicians who can integrate and maintain the systems. These upfront and ongoing costs, as well as lack of flexibility, put automation out of reach for many smaller high-mix weld shops. Even large firms must be able to drive enough utilization from the cells for an effective return on investment.

The benefits of automation are significant, however. Beyond addressing labor shortages, other advantages include higher part quality and consistency due to precise fixturing and low variance. This supports more repeatable processes downstream as well in the sub-assembly and final-assembly stages, which also can be automated. Higher quality parts and more repeatable processes lead to increased efficiencies throughout product development, decreasing time spent fitting inconsistent parts and cutting waste from over-welding, including excess filler metal, shielding gas and labor.

Automation can also facilitate a safer work environment by relegating the manipulation of parts to the robots and reducing workers’ accidental and repetitive stress injuries.

Until recently, the barriers to cost-effectively automating the welding process have limited the benefits of automation to a small segment of the welding market. Advances in collaborative robots, or cobots, are changing the equation, however. Now, smaller weld shops are looking to gain the same advantages from automation that large companies have traditionally enjoyed.

Collaborative robotics are the Industry 4.0 answer to balancing the limits and possibilities of traditional automation, while focusing people at the center of work processes. Cobots, such as those from Universal Robots (UR), can be applied to several tasks on the same day in a low-volume, high-mix job shop. The same cobot can join metal parts in the morning, hold a part steadily in place for human operators to fixture in the afternoon and sort hardware using a vision system overnight.

Incredibly light for their size, weighing from about 25 lbs. to 74 lbs. with a reach from 25 in. to 51 in., UR’s cobots can be mounted to floors, walls or ceilings and are easily carted around worksites by a single employee. Due to their small size and built-in safety mechanisms, cobots can often be deployed in existing weld cells or production lines without bulky safety guarding (after a risk assessment) and without expensive fixtures.

The cobot’s intuitive human machine interface allows line workers in a weld shop to assume the roles of robot programmers and technicians. UR cobots can go from installation to programming to running applications full time in as little as a few hours. Dozens of applications can be stored for one cobot, and creating a new program can be accomplished by simply moving the cobot arm through the desired motions.

With low upfront costs for the cobot, low integration costs and easy in-house programming, cobots can be easily deployed and redeployed for high-mix, low-volume production, even in small shops. The adoption of automation is made easier by the groundswell of new cobot-based welding systems entering the market, including new cost-effective, portable and rent-by-the-hour robotic welding systems.

The new BotX Welder, developed by Hirebotics, Red-D-Arc and Airgas, uses a UR10e cobot to address two major hurdles of robotic arc welding: ease of programming and ease of acquisition without assuming the ownership cost. There are no installation costs with the BotX. The system is “hired out” to weld shops with cloud monitoring that lets manufacturers only pay for the hours the system actually welds, much like using a temporary employee.

Manufacturers can teach the BotX Welder the required welds via an intuitive app on any smartphone or tablet, using a library of welding recipes contained in the software that were developed specifically for the BotX and optimized to work with Airgas’ Arcal shielding gas. The UR open architecture allows the BotX system to control wire feed speed and voltage as well as torch angle to ensure a quality weld every time. The complete BotX product offering comes with the UR10e cobot arm, cloud connector, welder, wire feeder, MIG welding gun, weld table and configurable user-input touch buttons.

An early adopter of the BotX Welder is Wisconsin-based Processed Metal Innovators (PMI), a metal fabricator that produces hundreds of different stamped and welded metal parts for heavy equipment, automobiles, appliances and more. Part sizes range from a few inches to 10 ft. and from thin-gauge material to 3/4 in. and heavier. With a tight labor market, few available certified welders and traditional robotic welders unable to handle small runs, PMI turned to the BotX welder to increase productivity and profitability.

“The Hirebotics team came in, unloaded the BotX off of their rental truck and within two hours they had it set up,” says Shaun Bruce, PMI’s robotics and automation area lead. “Within half an hour, I was running it and programming it all by myself.

“I’m not a certified welder, but I’m able to easily load a program, and I’ve got my tables mapped out in pictures, so I know where to put my tooling and my jig system,” he explains. “I’m able to swap between parts within a matter of 15 min.”

Vectis Automation also launched a UR cobot-based welding system. The new Cobot Welding Tool is a portable, safe, versatile and easy-to-use solution that is also available as a low-risk, no-capital, rent-to-own option. Vectis’ Let’s Weld Together intuitive programming interface is accessible directly through the UR cobot’s teach pendant. Programs can be created, saved and later recalled in order to handle the numerous part numbers typical for high-mix, low-volume shops.

“We wanted to build our cobot welder on the UR platform, providing the same user experience to welders that manufacturers in many other industry verticals now enjoy,” says Josh Pawley, director of business development and co-founder of Vectis Automation.

He adds that the Cobot Welding Tool is commonly 25 to 40 percent less expensive than the all-in cost of a small traditional robotic welder. The Vectis system comes with all hardware fully integrated onto a 3-ft. by 6-ft. mobile modular fixturing cart that allows metal fabricators to bring the cobot to the work or the work to the cobot with no anchoring or dedicated footprint required. 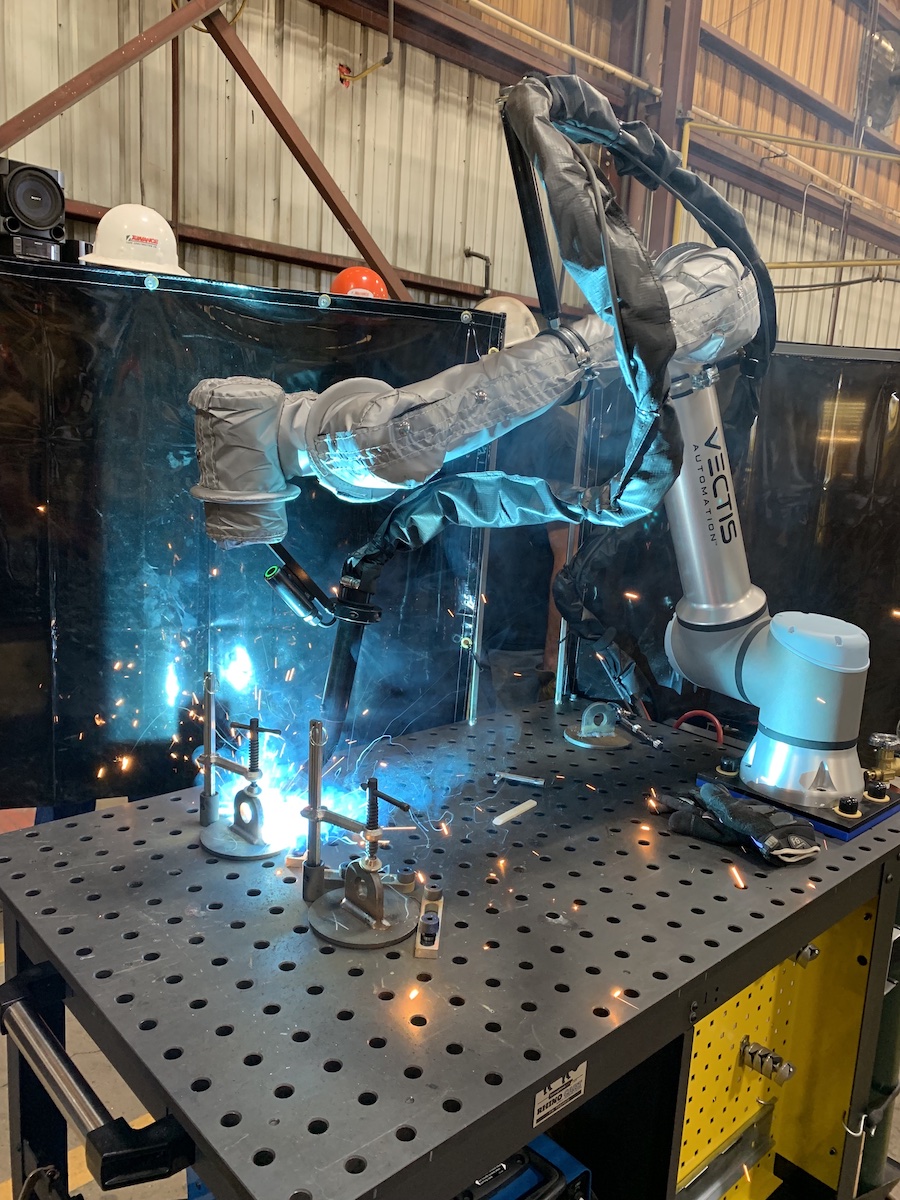 As cobots take on more innovative metalworking applications, weld shops of any size can now gain the advantages of automation to drive productivity, quality and competitiveness, even in the face of ongoing shortages of certified welders. Integrating cobots into workers’ toolkits is now easier than ever with new cost-effective automated welding systems.