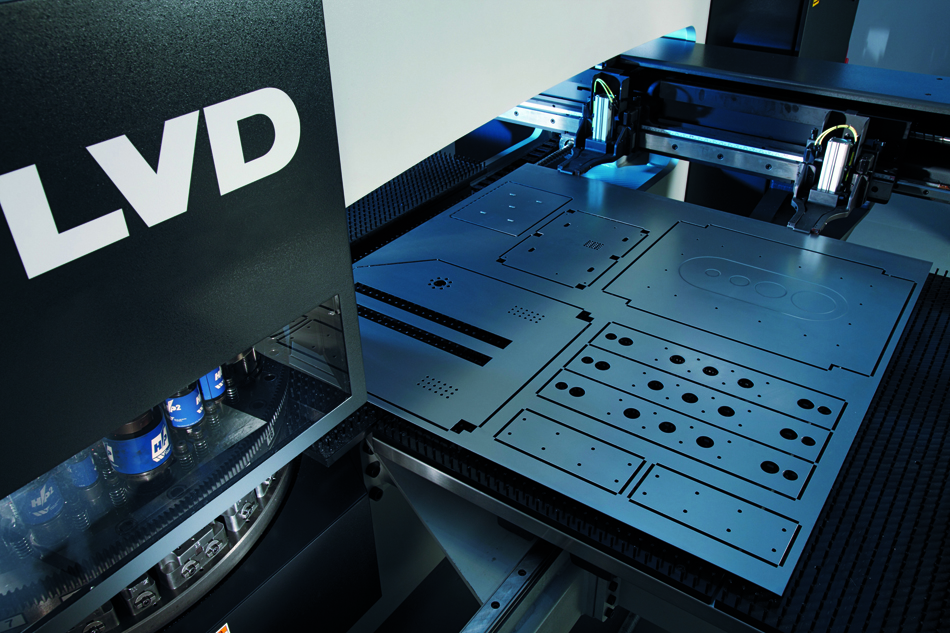 Not all job shops are aware of the fact that tapping and forming can be performed on a punch press.

In our last issue, we featured an article about where exactly punching fits in this current era of increasingly more powerful laser cutting (see “Punching in the Age of Lasers” in our June 2014 issue). As it turns out, punching is still very much relevant, and has found a niche for itself in machining, specifically tapping and forming.

Tim Brady, punching and combination product manager for Amada, elaborates, “Kind of the key point to making a part is as little handling as possible – being able to contain it all within one machine. In other words, if you punch a part out, and then have to take it somewhere else, either to another machine for tapping or – probably more traditionally – to somebody hand-tapping, you have to have someone sitting there doing that tapping all day. But by being able to just fold that into the original operation of making the part eliminates all that.

“Eliminating secondary operations has always been kind of a big point that we push when we talk about turrets. That’s ultimately the difference between a turret and a laser; with a laser, you really can’t do these secondary operations. That would be one of the key points of convincing people to go with turrets.”

Dan Caprio, LVD Strippit’s punch press product sales manager, agrees, “When you can have a part that is either all or mostly completed in one operation, you are saving on your secondary operations. This allows your other operators to do other things in the manufacturing process, thus making you more productive.

“When someone is manually lining up a hole to tap, if it is not lined up properly, it can snap, adding cost. When you tap on a punch press, the hole location is in perfect alignment with the pre-punched hole, thus no broken taps. You are also cutting down on all the material handling times that it takes to move each of the parts to the secondary work centers and then down the line. If you are producing a part, then take it to a work center for tapping, then move it again for a forming operation, you have a significant amount of time doing material handling. This is before you even do the secondary operations. The ability to do these things all on a punch press eliminates these operations.” It’s true that doing tapping and forming on a turret punch press is nothing that’s exactly new. Yet Brady points out that not everyone in the sheet metal industry is aware of these capabilities on a turret.

“Surprisingly, there are still an awful lot of people out there that it just doesn’t seem to occur to them,” he says. “They have turrets, but they just make flat parts. It seems to not occur to them that often that they can do these other operations, but it’s certainly worthwhile. What I’ve seen is that you can’t remind people about things enough, because there’s always somebody out there – even though the message is 20 years-old now – that never got the message. They’re still living back in the 80s in the way they process stuff.”

If many job shops therefore are unaware of the machining capabilities of turret punch presses, it thus begs the question of what types of turrets are available for these types of jobs?

For machining such as tapping and forming, Amada offers the servo-electric AE NT Series and EMK M2 Series turret punch presses, which offer increased speed and reliability, as well as greatly reduced energy requirements, over hydraulic models, in addition to the advantage of no required oil changes and less maintenance.

According to the company, the AE NT Series features a space-saving design to make the most of your floor space. In addition, the AE2510-NT model processes 4 ft. by 8 ft. sheets, and the AE255-NT model 4 ft. by 4 ft. sheets, both without repositioning. The series also offers tools for high-speed forming.

The EMK M2 Series features the ability to process sheets up to 10 ft. by 5 ft. without repositioning on the EMK 3612 M2. However, as far as machining goes, where Amada’s turret punch presses really shine is when they’re outfitted the company’s P&F option, which stands for “Punch & Form.”

“Other companies might call it by a different name, but it’s an option that’s available on certain models where in addition to the main ram that drives it, that does all the work – the punching and forming – there’s a secondary ram that actually comes from the bottom,” explains Brady. “It has an ability to push a tool up from the bottom, but it does require special tools P&F tools.

In this system, the tool in the upper ram comes down and captures the material, and then the lower ram does the forming operation. Brady mentions that there are three basic advantages to the P&F function. “One of them is that it maintains a standard pass line; in other words, one of the things that can happen with forming tools, or forming tools in general, is when they are put in a turret, the die is usually at a higher location than the typical pass line for the punching dies. This has a tendency to scratch the material when you’re running the material over it. “A P&F machine is able to keep its forming tools down low, so there’s no scratching, which leads to the second benefit: the tool doesn’t stick up, so you can utilize more of the turret gap. We have a 25 mm gap between our upper and lower turret and that limits how high of a form you can make.”

This P&F function allows an operator to use more of that space – a non-P&F tool might be limited to a maximum of about a 1/2-in. form height, depending on the type of form, whereas a P&F tool allows for almost full utilization of that 25 mm turret gap. Brady continues, “Finally, the third advantage of a P&F option is that you’re able to come down with the force of the upper ram, and capture that material – really put a lot of force on it before you form.” He mentions that a common problem with forming is that sometimes, when doing a lot of it on a sheet, the sheet will begin to distort in what he calls a “potato chip,” in which it loses its flatness and starts to pull up. Eventually, it becomes impossible to process and begins to catch on different parts of the machine.

Brady says that the P&F function helps to avoid this. “It allows you to capture the material before you form it, keeping the overall part flatter. Those are the three main advantages of P&F tools.” Adding the P&F function to a punch press does make it more expensive, and thus Brady says it’s not for everyone, however, when doing high amounts of forming, he emphasizes the fact that it’s a great help.

Caprio says that all of LVD Strippit’s turret punch presses, starting with entry-level machines, offer the ability to do forming of various types. In addition, most of them allow customers to tap on the machine, as well.

“Our newest offering, our PX machine, allows for forming up to a 3 in.,” he says. “When you combine this with the ability to tap and then evacuate a finished product down a part chute, you now have a finished product, with no handling for secondary operations. This is a great benefit to manufacturers when they are trying to take every second they can out of their manufacturing costs.” LVD Strippit offers five different models of turret punch presses – the Strippit ST-Series, P-Series, M-Series, V-Series and VX-Series – and one single-head machine, the PX-Series, which is their latest offering.

The M-Series is built for large capacity and flexibility, featuring 47 stations including three 3.5-in. auto-indexing stations able to accept “a variety of indexable Multi-Tools, tapping and wheel tools” and “four 2-in. stations [that can] accommodate large punching and forming operations.” The series also offers 25 mm of feed clearance, allowing “for the production of higher forms such as lances, louvers, embossments or card guides.” Without repositioning, workpiece sizes up to 60 in. by 98.4 in. can be processed, and both Smart Clamp and Smart Stroke technologies are included as standard features.

The V-Series is every bit as robust as the M-Series, and possibly even more so, offering 48 stations with “three 3.5-in. indexable stations on 30-ton models and up to 34 stations with four indexable stations on 20-ton models. The 30-ton models also allow one additional fixed 3.5-in. station or one fixed 4.5-in. station for large parting tools, louvers or special forms. The autoindexing stations accept a variety of indexable Multi-Tools and tapping tools to enhance capability and flexibility while reducing set-up time.” Workpiece sizes up to 60 in. by 98.4 in. can be processed without repositioning, and Smart Clamp and Smart Stroke are also included.

Of the VX-Series, LVD Strippit says that it “delivers the highest level of punching productivity of any Strippit CNC turret punch press,” with 48 stations and an “innovative table design [that] makes this turret punch press 30 percent more productive than previous generation Global machines.” Workpiece sizes of up to 60 in. by 98.4 in. can be handled without repositioning. The series also features “three programmable, relocatable work clamps, which can be automatically positioned on the X carriage and individually relocated to a new position within the part program. This reduces or eliminates ‘no punch’ zones, increasing material utilization.”

Finally, the PX-Series, Strippit’s most recent punching introduction, “offers the flexibility to punch, form, bend and tap on a single machine” and can process complex, three-dimensional parts. In addition, “knockouts, louvers and countersinks are accurately produced, flanges up to 3-in. high can be formed in a variety of angles and internal as well as external bends can be achieved. Even parts not located at 0 or 90 degrees on the sheet can be formed using the OptiBend feature.” Automatic loading and unloading features are also available. 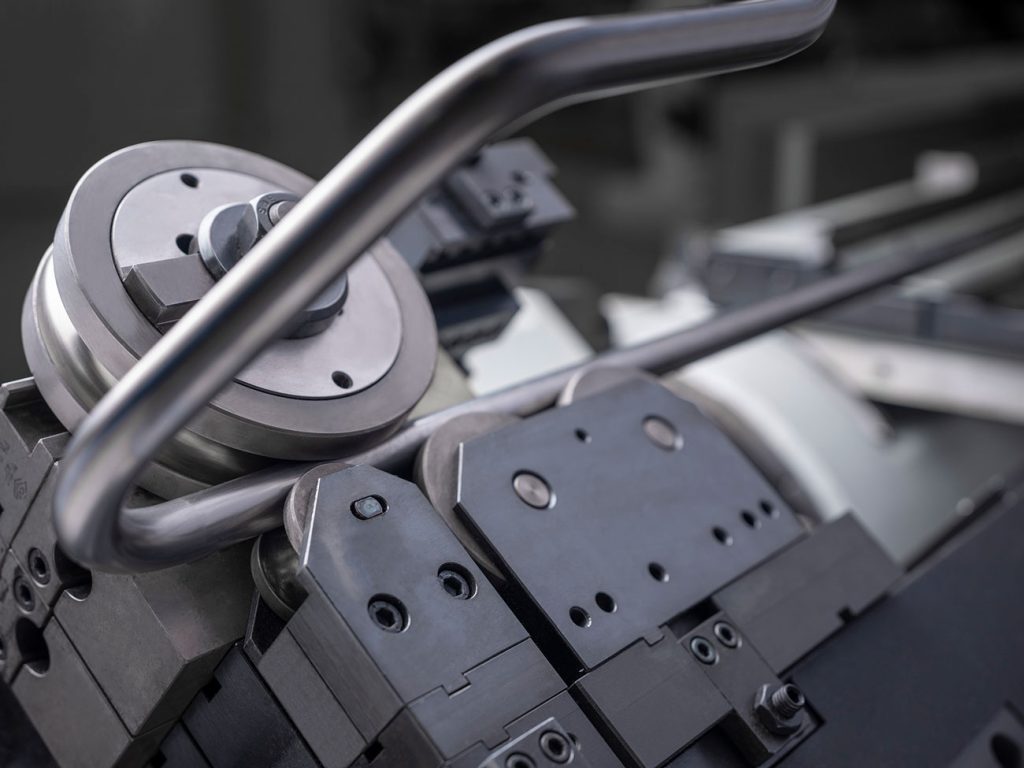 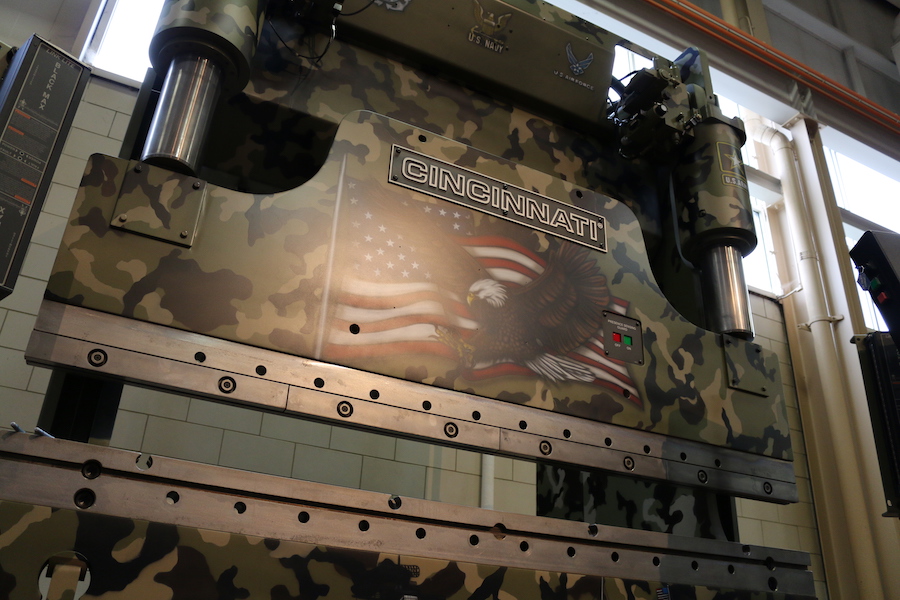