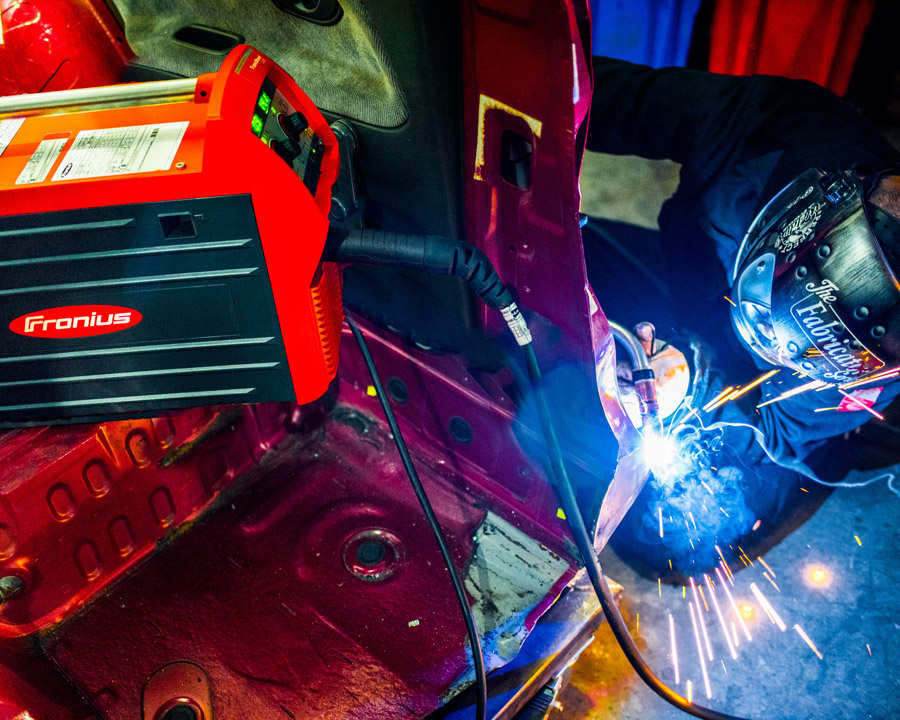 The internet, and YouTube specifically, has helped launch many a career for teachers and product reviewers in every industry imaginable. Even the welding industry has benefited – from videos explaining new welding process to product demos from a variety of OEMs and welding experts, YouTube serves as a go-to source for how-to information.

As just one example, Justin ‘The Fabricator’ Merrill, an engineer, fabricator and media personality, has been producing informative online videos for the welding industry for more than three years. During that time, he’s amassed an impressive viewership of more than 128,000 subscribers and nearly 9 million views. He demonstrates how to build, fix, modify, engineer, correct and create virtually everything that can be welded.

Merrill spent almost two decades dedicated to engineering in the automotive performance fabrication industry. After retiring from the U.S. Navy due to a disabling injury, in 2015, he decided to pick up a camera and make some videos for others to learn from – thus, The Fabrication Series was born on YouTube.

As demand grows for more welding and fabrication knowledge, Merrrill’s goal is to bring the world of fabrication back into the public eye and help train those interested in the industry – the next generation of welders and fabricators – with trusted practices and knowledge based on his professional experience. Hands-on fabrication classes are available at his facility in Las Vegas.

Over the last three years, Merrill has been asked to review everything from welders and tools to items that have nothing to do with the industry, such as video games and personal grooming aids. Though he accepts only a fraction of the requests, he’s still had his share of product disappointments. But that wasn’t the case with two new Fronius technologies – the TransSteel 2200 and MagicWave 230i.

Merrill had his first opportunity to weld with a Fronius machine at Fabtech 2016 in Las Vegas. He’d known of the brand before then, but mainly as an industrial welder with high technology best suited for robotic welding, so he stopped by the booth to learn more.

At trade shows, Merrill prefers to keep a low profile so he has the freedom to learn about products without his internet fame getting in the way. Sometimes that means he’s ignored or dismissed, but the Fronius team was helpful and knowledgeable.

“They didn’t care whether I was buying or not,” he says. “They were easy to chat with and gave me plenty of time with the machines. I wasn’t just blown away by the welders and what they could do, I was blown away by the service, even though I wasn’t there to buy. Normally at a booth the staff is like, ‘If you want it, let’s talk; if not, go somewhere else.’ I never got that at Fronius.”

The technology impressed him enough that he came back to the Fronius booth during Fabtech Chicago in 2017. Merrill prefers TIG welding and was intrigued with the MagicWave 230i, a TIG welder coming out the following year. The machine has many of the features he was looking for, and comes in a well-designed package that caught his attention.

His excitement grew upon learning the MagicWave gives the welder control of the AC waveform on either the positive or negative side, allowing an experienced welder to dial in their “signature” bead. That sealed the deal for him and he worked with staff to get a variety of Fronius machines in his shop.

Out of the box

As is typical of his product reviews, Merrill was skeptical of the promises but eager to check out the machines. One of the first machines on deck was the TransSteel 2200, a compact, multi-process welder with stick, MIG and TIG capability.

One of the first surprises was that it took longer to unbox the machine than to set it up for the first weld.

“I can’t fault anything on these machines,” he says. “It’s part of my job to find a gripe or a dislike, but I can’t when I talk about Fronius.”

The TransSteel 2200 is a compact, 3-in-1 solution – three processes in one power supply. It is the first single-phase inverter power source from Fronius that is also multiprocess-capable, bringing together MMA, MIG/MAG and TIG in a single device.

The TransSteel 2200 is characterized by the intelligent design of the device, ease of use, robustness and a high level of reliability. It offers superb welding characteristics on mild steel, stainless steel and aluminum. And it weighs in at 34 lbs.

The 220-amp machine has dedicated spool holders for 12-lb. and 2-lb. spools and welds steel, aluminum, stainless, flux- and other cored wires. By reconnecting the integrated polarity reverser, flux-cored wires of different polarities can also be welded. Aluminum welding typically requires a spool gun or push/pull setup, but the TransSteel comes with a 400-amp, ergonomic push torch.

Merrill’s shop is wired for single-phase electricity so the machine fit in perfectly.

Every challenge Merrill has thrown at the TST 2200 has been met. And as an engineer, he appreciates the many design features it offers. From the air vents designed to keep out harsh shop environments to the small drive roll compartment inside the machine, functionality is at the forefront of the design.

Merrill tested the torch on aluminum and was surprised that even with 0.035-in. 4043 aluminum wire there was no wire jam, or birdnesting. This is because of the optimized feeding system of the TranSteel 2200 coupled with the Fronius torch.

Other TransSteel features include a second gas solenoid valve on the rear that enables process switchover without having to reconnect the welding gas and a side cover that opens downward to give easy access to the wire spool, which can be changed without tools.

The parameter selection is simple. It only requires setting the wire, wire diameter and gas. A range of characteristics is already preset on the device, and additionally, the machine has all of the standard Fronius synergic lines, including features such as hot start and crater fill.

As for the MagicWave 230i TIG welder, Merrill posted a video review on July 5 on Facebook. With his typical enthusiastic manner, he specifically commented on the electrode diameter selection and cap shaving feature. Unsurprisingly, he has nearly 10,000 likes on his Facebook account.

For many years now, Merrill has had a passion for creative problem solving and the processes and systems that support function-based solutions.

“You have to think ahead to the functionality of the product,” he says. “You can build a superior chassis, but if in the end a mechanic can’t change out the alternator, you’ve failed. I think that’s my biggest connection to Fronius, that all of these solutions are basically standard on their machines.”

Merrill practices what he calls “the art of continued skepticism.” This helps him focus his website and YouTube channel on the best products and services for his customers and viewers. He tests each product fully, even keeping in the mistakes he makes or welds that aren’t beautiful. Viewers like to see they are learning from a real person, in real-world situations.

When asked what he’d like to convey most about his Fronius experience, he replies, “Fronius has stepped up to a different realm. Fronius is more like one of my heroes, Walt Disney. They say, ‘Okay, here’s what we have, now let’s plus it, let’s make it better. Let’s offer something that doesn’t exist. Let’s actually take this and bring it to the 21st century. Let’s throw stuff in there that actually solves problems and make it work forever.’”