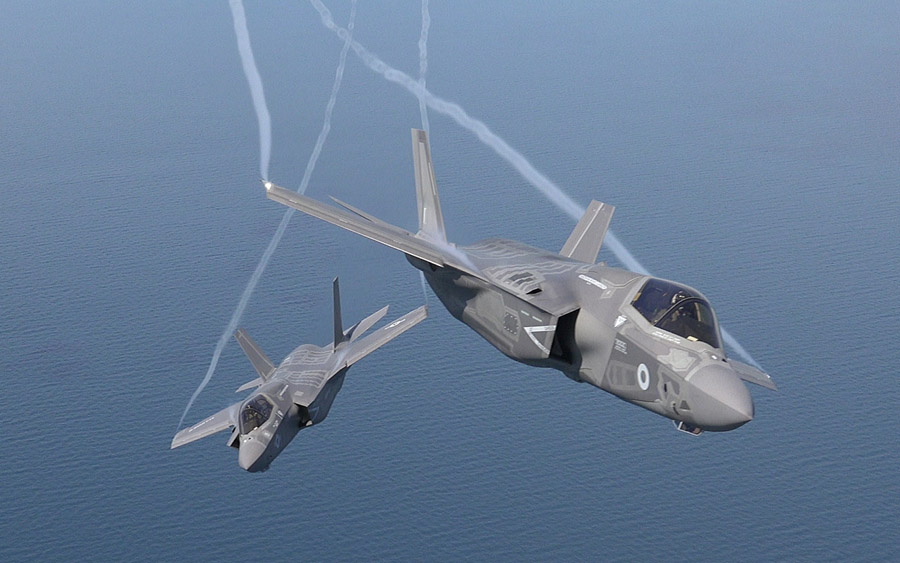 The F-35 Lightning II has captured the attention of airplane enthusiasts with its fifth-generation fighter aircraft characteristics, such as advanced stealth technology, integrated avionics, sensor fusion and sleek design. The price tag has also caught the attention of a few politicians, but that’s another story. The fact remains that the advancements in the F-35 bring new flexibility and capability to the U.S. armed forces and its allies.

Utilizing advanced electronic warfare technology, F-35 pilots can locate and track enemies, jam their radar and disrupt attacks. The fighter jet also has the ability to collect data and send the information to commanders at sea, on the ground and in the air.

The F-35’s multi-role design allows it to defend airspace without being seen while attacking targets on the ground. Integrated sensors and weapon systems offer pilots an air-to-air advantage during aerial combat. Furthermore, the F-35 also has capabilities that bring a surveillance threat to enemies.

Promotional videos show the F-35 making traditional takeoffs and landings as well as short takeoffs and vertical landings. The F-35 also touts cutting-edge technology, such as a display in the visor of the pilot’s helmet that connects to six cameras imbedded in the skin of the fighter jet, allowing the pilot to essentially see through it. The design is so intricate that its mission systems (operating software) have more lines of code than what was used to launch the Space Shuttle.

Obviously, Lockheed Martin, the company tasked with heading up the design and build of this advanced fighter jet, has a focus on precision. The F-35 is made up of 300,000 parts from 1,500 international suppliers.

Dynamic Fabrication Inc. (DFI), a niche prototype shop in Orange County, Calif., is one of those suppliers. The company has experience fabricating precision assemblies, tooling and short-run parts for customers in the aerospace industry. Due to confidentiality agreements, Mike Kartsonis, president of DFI, can’t disclose what parts his shop is making for the F-35, but the steps his team goes through to make the parts are fairly intense.

Kartsonis says his company has 35 years of experience working on a daily basis under American Society of Mechanical Engineers and American Welding Society codes. From the beginning, the company made significant time and financial investments, along with many hours of hard work to establish the expertise and reputation it has gained today.

“Highly skilled craftsmen are also extremely important,” Kartsonis adds. “Dynamic Fabrication has a 30-page welding standard that we religiously follow for each job. It all goes back to quality and traceability.”

The projects DFI tackles vary widely. For example, jobs might include the production of small parts that fit in the palm of the hand, but the company has also produced large parts that weigh 10,000 lbs. and include 20-ft.-long welds.

But why pick such a demanding, challenging industry? Kartsonis says the reason his company became a niche market prototype shop was due mostly to customer demand. He also had a desire to do something out of the norm.

“I didn’t want to do what everybody else does,” Kartsonis says, adding that most shops specialize in one thing but he wanted to branch out as a one-stop shop. “There aren’t many shops that do welding, machining and sheet metal [fabrication].”

Anyone who wants to get into producing parts for fighter jets better be ready to beef up security and add specialized welding equipment and inspection equipment to their arsenal of tools.

Plus, being a prototype shop means taking unique orders daily. Some team members have been with DFI for 25 years, and it’s the variety of work that keeps them there.

The team at DFI doesn’t make 100 of the same part every day. They’re not making bicycle frames, dishwashers or fitness equipment. They’re making a variety of products using a variety of metals. Some days it’s aluminum, while other days it might be stainless or titanium.

“After doing prototype work for 35 plus years,” Kartsonis explains, “we are accustomed to new challenges. Our highly skilled craftsmen make difficult jobs look easy. The majority of our team has been with DFI for 15, 20, 25 years, so they understand the wide variety of projects we handle.”

On top of being interested in producing a variety of different parts and being highly skilled, the employees are held to specific standards beyond what commercial welders work by, including the AS9100 aircraft quality standard. The AS9100 standard is based on the ISO 9001 quality system requirement, but has additional quality requirements that are established by the aerospace industry. These standards satisfy such organizations as the FAA, NASA and DOD.

To keep aerospace customers coming back, Kartsonis’ team has to take on continuous training, have their eyes examined, and undergo extensive internal reviews and risk management procedures. Kartsonis says the aerospace industry is a “whole other level of quality, delivery and criteria for acceptance.”

He makes a math analogy to describe the differences between what his company does compared to traditional weld shops: there is algebra, geometry and trigonometry. And then there is calculus. DFI is doing calculus work.

Policies, procedures, certifications, testing – they only scratch the surface of what is required to work on aerospace and military projects.

“The list of criteria goes on and on,” Kartsonis says. “All of our equipment needs to be calibrated, some of it every six months and some of it every year. We’re in a situation where we have to monitor everything and have procedures on everything we do.”

DFI’s inspection department is measuring parts with extremely close tolerances, some to 0.001 in. and some even to 0.0001 in. 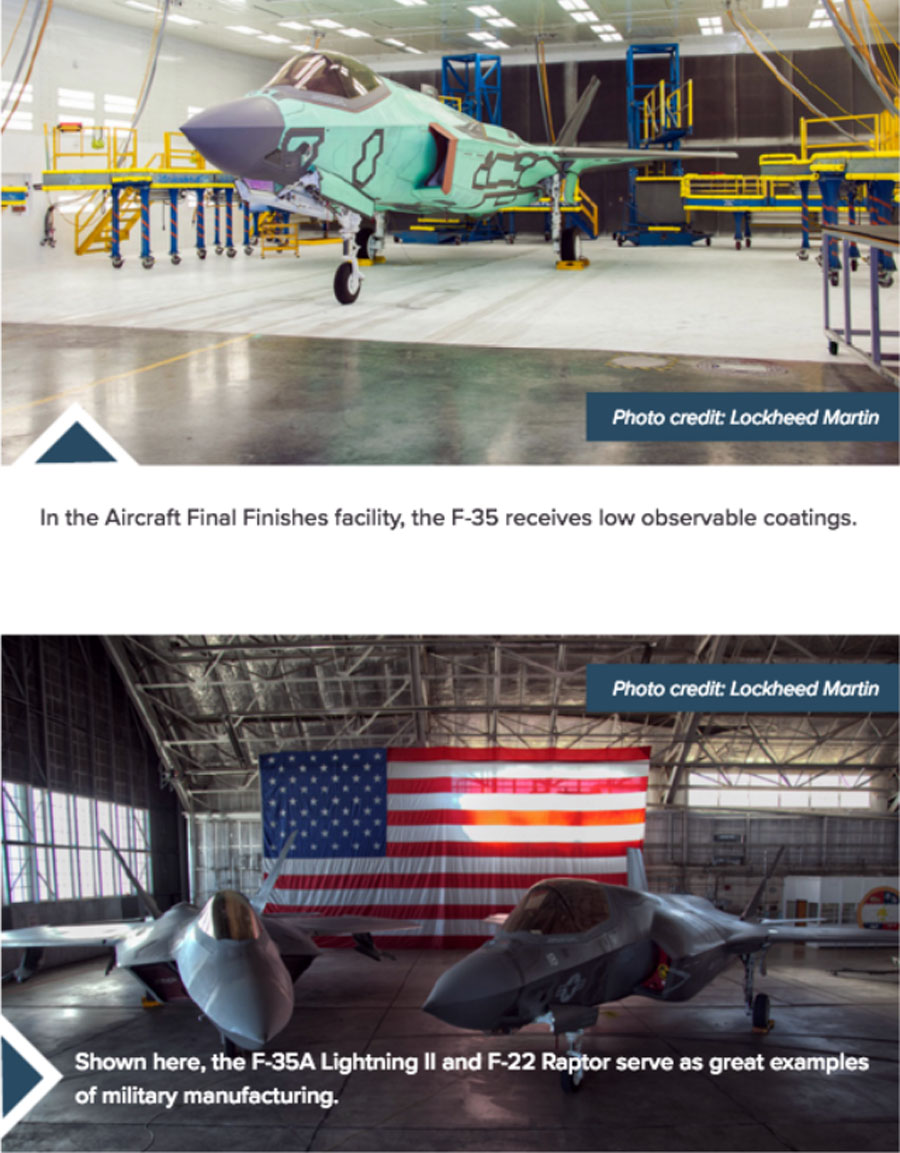 Weld testing varies per job, but includes X-ray, florescent penetrant, mag particle testing and more. DFI’s list of inspection equipment is impressive and offers a glimpse into what it takes to run a shop that produces aerospace parts. It includes a Rommer coordinate measurement machine 6-axis arm, a Scherr Tumico optical comparator and a Mitutoyo Height Master.

“Some of the welds are X-ray quality welds,” Kartsonis notes, “which means you have to make sure there are no craters, cracks, porosity or voids. If we’re putting them on a rocket that goes Mach 4 or Mach 5, there is not a whole lot of margin for error.”

An example of one process that requires the highest quality weld is when DFI is welding titanium for aerospace customers. They make the welds in an argon gas-filled bubble surrounding the workpieces so no oxygen can compromise the quality of the weld. 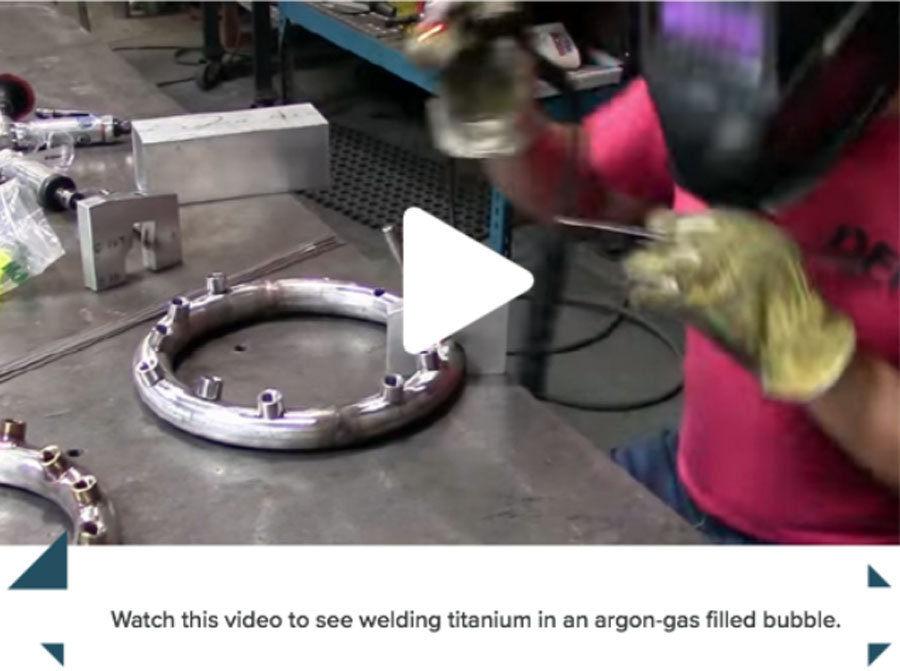