Today, the global market for these machines is valued at more than $4 billion, and few would argue that laser cutters rank among the most important of all metal cutting machinery, used every day by manufacturing companies both large and small worldwide.

Laser cutting’s decades-old triumph raises a very basic question: Why can’t a similar success story be told about laser welding? It’s been around nearly as long. It’s fast, effective and able to produce top-notch welds in a range of materials. And considering the ubiquity of their sheet metal cutting cousins, there’s certainly no mystery behind laser operation. So why does a sizable chunk of the fabricating world still have a wait-and-see attitude toward laser welding, with MIG and TIG still leading the pack in all but high-volume or specialty welding applications?

Erik Miller, business development manager for the laser group at Miller Electric Mfg. LLC, explains that much of this reluctance comes down to price; where a high-quality robotic welding cell might cost $150,000, a shop can easily spend three to four times that much on one designed for laser welding. One example of this is the Miller PerformArc system, which he describes as a “flexible, pre-engineered, direct-diode laser welding solution targeted at job shops and other general-purpose welding use.”

Miller’s quick to point out that the significantly higher investment cost is often easy to justify. With far lower consumable costs, welds that require little in the way of finishing work and weld speeds roughly 10 times faster than competing methods, laser welding, in many cases, should be a no-brainer.

Yet, even if the cost of laser welding cells wasn’t an issue, there’s another factor holding the technology back, and that’s decades of arc welding-oriented part design.

“The best candidates for laser welding have joints designed with lasers in mind,” Miller says. “If the part calls for a bunch of fillet welds, for instance, laser’s probably not the best approach. But laser does really well with lap welds and butt welds – anywhere you have an overlap condition or at least a decent fit-up, laser’s definitely a good solution.”

Welding expectations need to change, as well. For instance, the greatest value proposition with laser welding comes when no filler material is used, also known as autogenous welding. This not only changes how welds look, but also affects how they’re called out on the drawing – where a typical MIG weld might specify 1/4-in. legs, a laser weld is measured by its throat depth, or S-value, denoting the amount of penetration. And, of course, laser light shielding and safety must be considered, a factor that accounts for at least some of its higher cost. 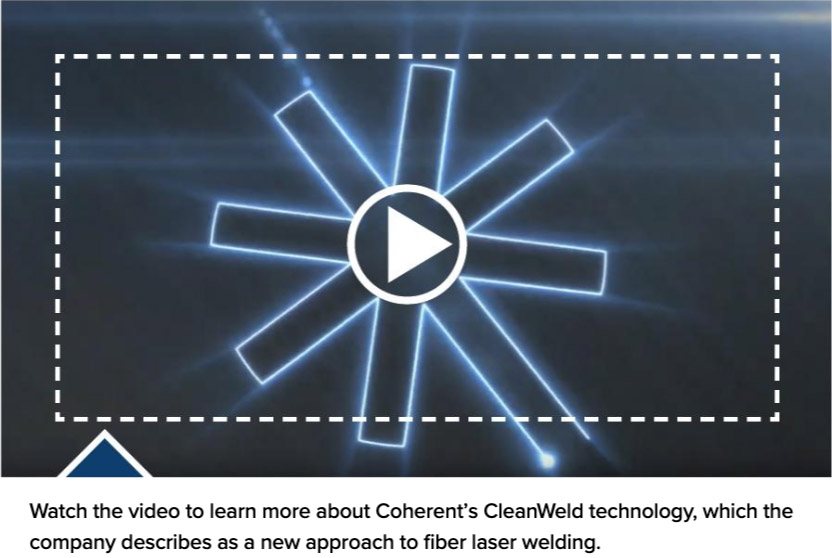 Whatever its limitations and however it’s measured, it appears that the welding tide is finally turning in laser welding’s favor, due in large part to the same technology that created a stir with laser cutting machines over recent years: fiber lasers. According to Frank Gäbler, director of product marketing for fiber lasers at industrial laser and systems manufacturer Coherent Inc., this is one of the reasons that laser welding use has expanded greatly over the past few years.

“Even as far back as the early 1990s, CO2 laser welders were being used in the automotive industry for drive train parts as well as door and body panels,” he says. “But automotive and other industrial markets have exploded recently thanks to the introduction of fiber laser technology.

According to Gäbler, much of this growth can be attributed to the increased availability and types of high-quality fiber lasers that are compact, easier integration with fiber delivery and prices that have dropped significantly as their popularity has increased.

Yet another factor weighs heavily on the minds of welding aficionados everywhere and that’s the optics. Unlike cutting lasers where the spot size may change in diameter but generally travels in a straight path, laser welding beams can be made to “wobble,” not unlike the trochoidal path taken by the marking pen in the greatest childhood toy of all time, the Spirograph.

This wobbling motion heats the material on both sides of the joint, in essence making the welding area significantly larger than is possible with a fixed beam. Penetration and welding rates are higher, there’s less need for filler material and the so-called bane of laser welding – loose fit-ups – becomes less problematic.

Both Coherent and Miller (which uses Coherent lasers in some of its welding cells) offer this function, as does machine tool builder Amada America Inc. with its Ensis technology. Fiber laser welding (FLW) product manager Dan Belz says the company’s second-generation FLW Ensis has been available to the U.S. market for the past year and has already proven to be a game changer.

“We’ve been using adjustable optics in our laser cutters for years, but have since applied that technology to our laser welders,” he says. “The FLW Ensis, though, also has rotating optics, allowing us to roughly quadruple the effective width of a 0.012-in. beam. While training the customer at a recent installation, we experimented with different welding techniques and Ensis modes and were able to bridge a 0.040-in. gap in 14-gauge material without filler metal. In another example, we used beam weaving to join 0.020-in.-thick aluminum. It’s like welding a beer can.”

Belz’s customers are impressed, as well. For instance, a stainless steel sink and tub manufacturer that welds “99 percent of everything they make” used their new FLW Ensis laser welding system to reduce production time from an average of 42 min. per sink to just 15 min. Weld penetration is 100 percent, and the sinks come off the line ready for buff and polish – no grinding necessary.

It’s important to note that this last example breaks the stereotype of laser welding as a high-volume process. Belz says that on a typical morning, the welding cell “might see eight big sinks, six small sinks and five of something else,” he explains. “Then that afternoon, they’ll run four big sinks and eight small ones – they’re throwing different stuff at it all the time.

“About the only real production volumes come on third shift, which is responsible for welding the bases used with every one of their products,” he continues. “Here, they figure that laser welding will save them more than $400,000 in production costs on a single part number alone. Add it all up, and it’s truly amazing technology.”