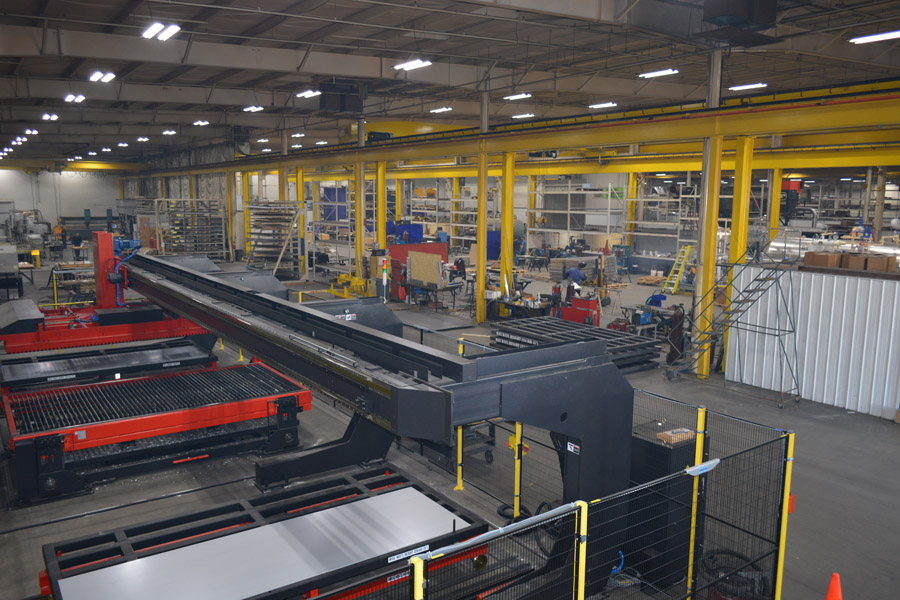 Whether it’s paper and pulp, printing and publishing, pharmaceuticals, packaging or power generation, chances are that Robinson Metal Inc. has made parts for it – and that’s just the industries starting with the letter “P.” This De Pere, Wis., job shop serves virtually every major industry with a variety of services and prides itself on being a single source for world class metalwork at a competitive price. 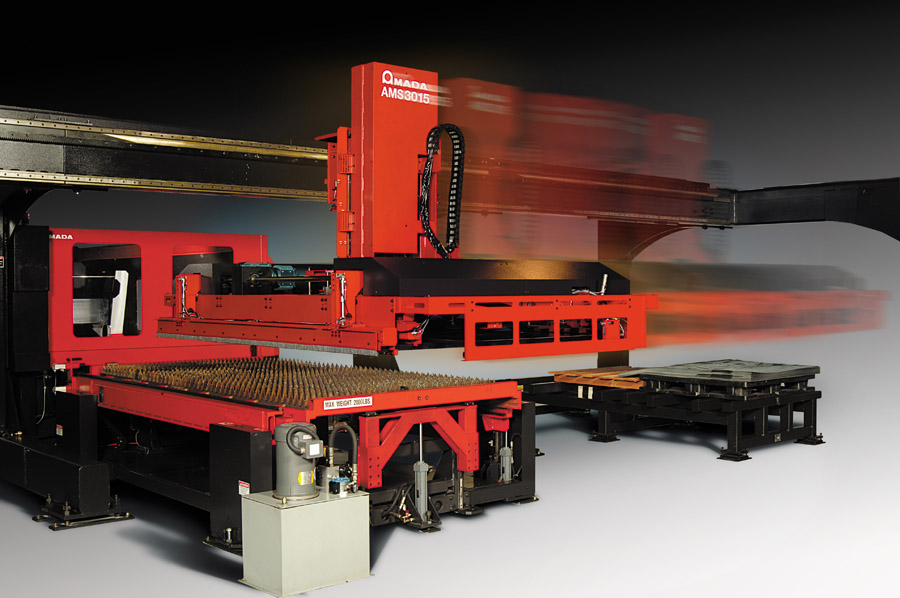 Amada’s AMS3015 is a smaller cousin to the AMS4020 recently installed at Robinson Metal.

Nestled in the heartland

To call Robinson Metal a job shop is an understatement. Situated along I-41 south of Green Bay, the company’s 185,000-sq.-ft. facility takes up a large chunk of the land. It boasts eight overhead crane bays and paint and blast booths large enough for the family car. There are 242-ton press brakes, 33-ton turret punches, waterjet tables able to slice through 8-in.-thick material and other fabricating equipment.

Robinson Metal doesn’t limit itself to traditional fab work, however. Its machine shop is equipped with multitasking CNC lathes and mill-turn centers, boring mills, vertical and horizontal machining centers – the list goes on.

Yet success in fabrication and metalworking takes far more than machinery. Robinson’s 300 employees work a rotating six-day shift that keeps the production floor operating around the clock. This labor force includes more than 100 AWS-accredited welders, skilled machinists, assemblers and master electricians. The workers provide a variety of engineering services, from CAD design to testing and validation of the installed products.

These are impressive lists, but they represent a small sample of Robinson Metal’s capabilities. In fact, the company has such broad expertise that it created four separate divisions, so as to provide the best customer service and industry focus possible.

The company’s Pipe and Vessel division was formed in 2012. It is ASME certified to U, S and R stamps (for boiler and pressure vessels) and meets or exceeds CRN, PED, UL/CUL and API 620/650 guidelines (relating to storage tanks).

“There are very few jobs we can’t handle, but we do prefer the ones where we can use our capabilities to the best advantage for us and our customers,” says Jamie Tilkens, manager of Robinson’s Fab and Machine division. “That said, we’ve always tried to avoid focusing too heavily on one specific industry, positioning ourselves with the equipment and people needed to tackle whatever comes through the door.”

Large, automated cells such as the one shown here are capable of producing a variety of parts with no operator in attendance.

It wasn’t always Robinson Metal. In 1923, Al Robinson and co-founder Henry De Caster opened Badger Sheet Metal, a supplier of furnace, roofing and sheet metal supplies to the surrounding area. The fledgling company soon expanded into fabrication and over the next 50 years became one of the Midwest’s leaders in metalworking.

The Robinson and De Caster families eventually parted ways, however, and Al’s sons Tom and Maurie went on to found Robinson Metal and Roofing. Even then, the Robinsons had an eye toward diversification, and the new company was organized into its three areas of expertise: heating and air conditioning, sheet metal fabrication and roofing.

Since then, Robinson has continued to redefine itself. In 1987, Tom Robinson’s son Todd joined the company as a salesperson for heating and cooling. Two years later, longtime Robinson employee Darrell LaCrosse became general manager. And in 1999, these two purchased the company after the death of Maurie Robinson and subsequent retirement of brother Tom. They moved to a larger facility, changed the company name to Robinson Metal Inc., and continued a legacy of growth, diversification and staying current on manufacturing technology. 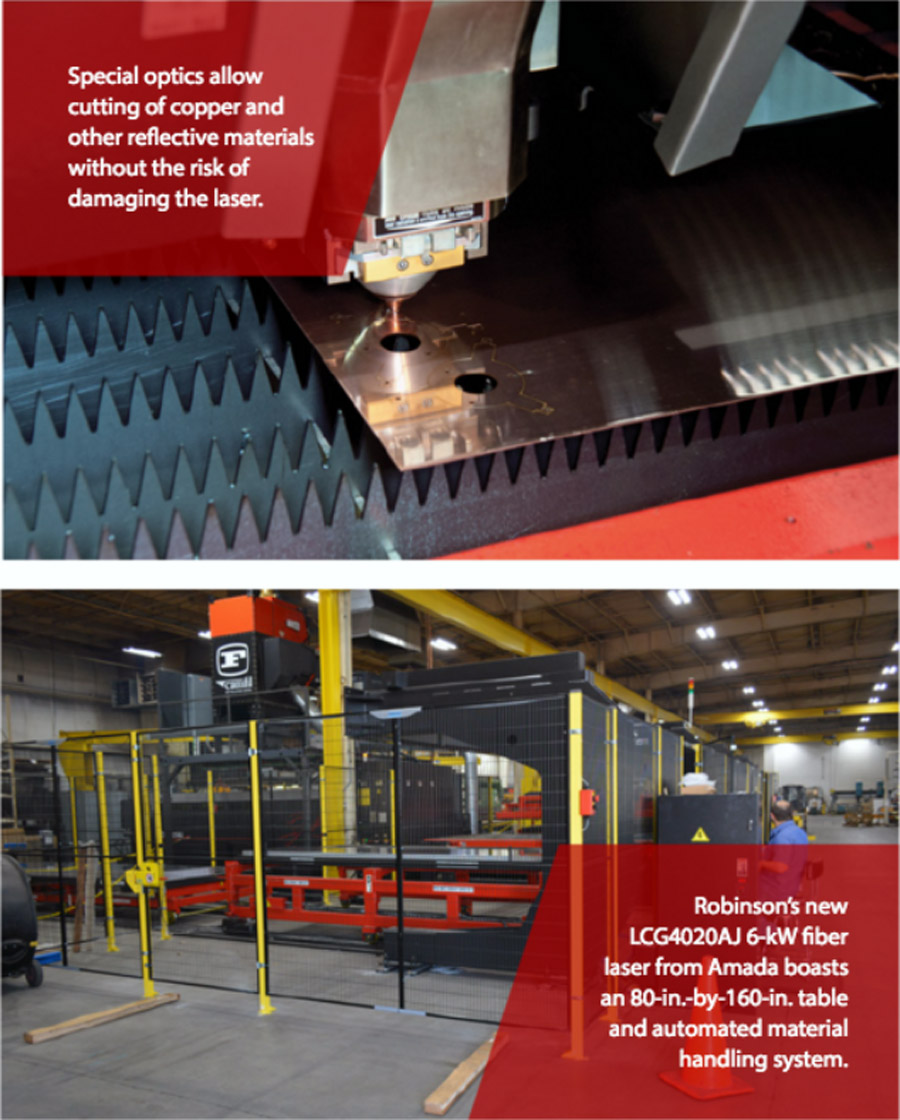 The most recent example of this arrived in October 2016, when Tilkens and his team shuffled off some of their older laser cutting equipment in favor of an Amada LCG4020AJ 6-kW fiber laser equipped with an 80-in.-by-160-in. table and AMS4020 automated material handling system.

Robinson has been an Amada partner, using Amada equipment for more than 30 years, but this is the company’s first fiber laser cutter, technology that Tilkens anticipates will greatly improve production throughput and quality.

“Our CO2 lasers are six years old, and we as a company have always been very diligent about upgrading to whatever new technology becomes available,” Tilkens says. “It’s very hard to compete against a company that’s cutting with a fiber laser versus CO2 – with some materials, we can now cut up to five times faster.”

For those who argue that fiber lasers are limited to thinner materials, Tilkens offers the following advice: “With mild steel 3/4 in. or thicker, we usually just stick it on one of the waterjets. Our machines have dual heads, so we can cut two parts at a time, and the edge quality is better at this thickness. For anything thinner than that, fiber is the way to go.”

It’s also Robinson’s first foray into automated material handling. The AMS4020 sports a pair of load and unload tables at either end of the laser cutter, together with a robotic pickup system – raw material goes in and finished sheets of nested parts come out, without the need for an operator in attendance.

“I don’t anticipate that we’ll be able to run everything lights out, but we definitely have some jobs where automation will provide a distinct advantage,” Tilkens says. “It’s the right direction for us.” 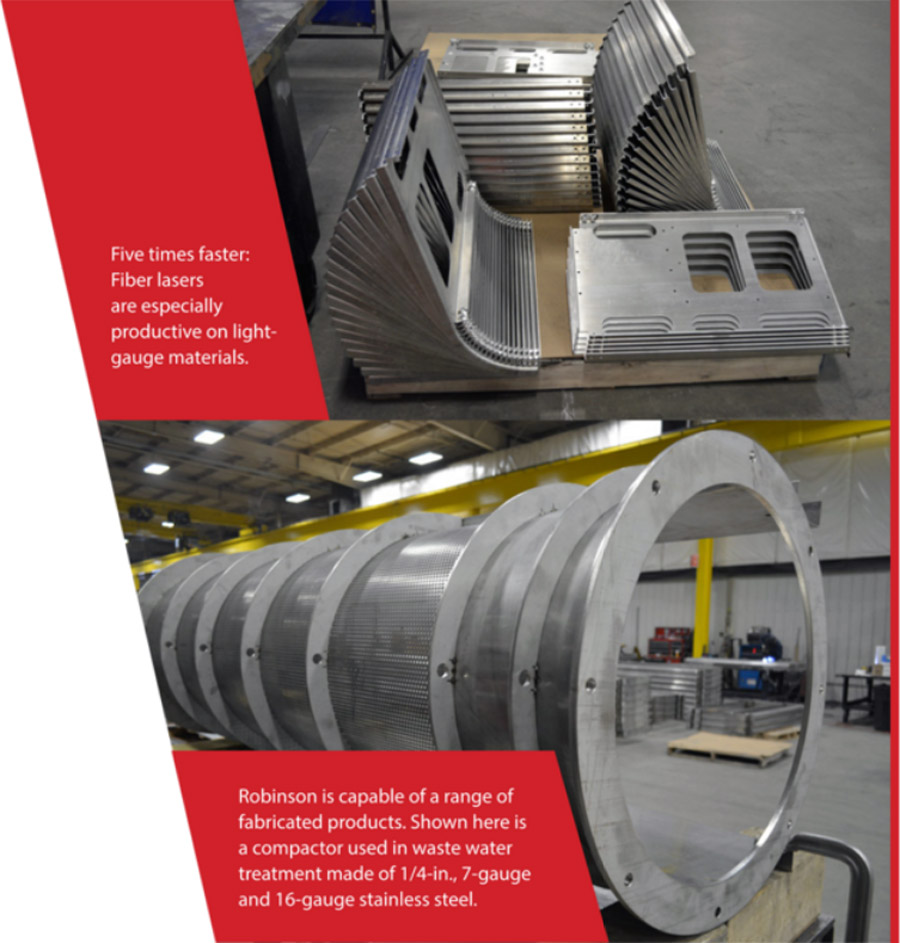 None of the company’s enthusiasm about the fiber laser system comes as a surprise to Dustin Diehl, product manager of the laser division at Amada America Inc. Compared to 10 years ago, he says, fiber has made tremendous strides in the fabricating market. “In 2013, fiber accounted for roughly 30 percent of all laser sales. Today it’s probably 80 percent and climbing.”

Diehl suggests that would-be fiber laser buyers pay close attention to the number of modules used to power the laser: fewer is better, he says. And don’t assume that because a 6-kW laser is good at cutting up to 1-in.-thick material, that a 9-kW laser is going to cut 2-in. material and put your plasma table out of business.

“Higher wattage generally means that cutting speeds in midrange materials are far faster than was previously possible,” he says. “Where you used to cut 1/4-in., 7-gauge or 11-gauge materials at 90 to 100 imp, now you’re running 300 ipm. Thinner materials are even faster than that – we have some customers cutting at 1,000 ipm or more.” 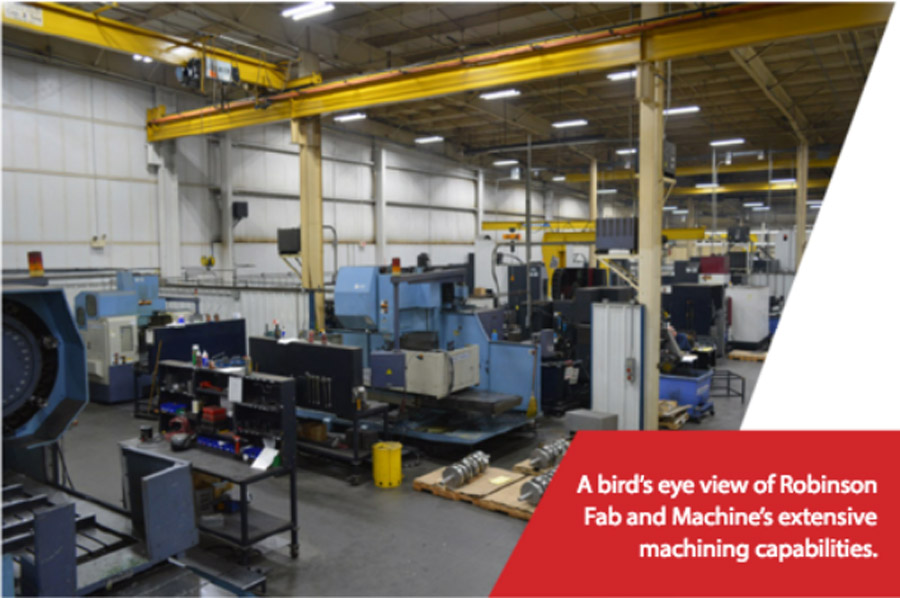 Tilkens says it’s early yet, but so far the new machine appears to be a winner.The operators have just finished their training and are programming their first production runs. The Amada AMNC 3i machine control is a bit different than its predecessor, but is “about as difficult as learning where all the buttons are on a new cell phone.”

When asked about the challenges in the metalworking world today, Tilkens says he feels the same pain most shop management does: finding qualified people. Yet even here, Robinson is taking the lead by working with area schools to encourage young people to enter the trades.

“We’re doing a mentoring program at the local high school,” he says. “We have several students that go to classes for a couple hours each morning and then come learn from us for six hours each day. I know for a fact that two of them will work for us after graduation.”

Robinson is also involved with the welding program at a nearby technical college, working with the instructors and students there and making suggestions on how to optimize the training curriculum for “our next generation of workers,” Tilkens says.

His advice to others in the industry is exactly what Robinson Metal has been doing for decades – diversify as much as possible, and invest back into the company. “You have to be in it for the long haul,” he says. “I’ve seen a lot of shops fold because they didn’t plan for the future. You have to spend money on equipment, on training and expansion. That’s what’s made us successful.”