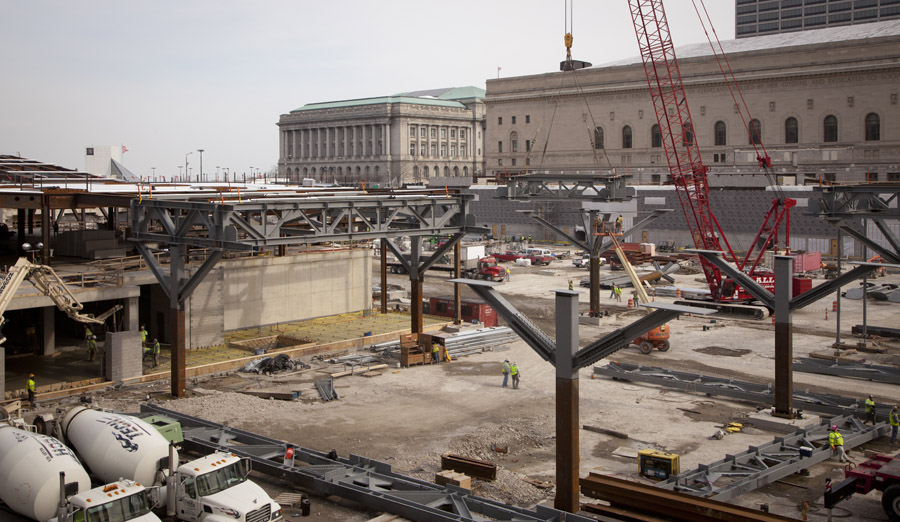 Job-site welding, whether at a construction site, shipyard or other large site, is challenging. In addition to the typical welding challenges, welders must deal with other noisy, distracting processes going on nearby; harsh environments; and work areas that are spread out or located in high places or small spaces with limited access to the weld location.

On top of the hurdles that welders must overcome, the welding equipment itself also faces challenges at the job site, including power limitations.

“Many times, it’s a first-construction site so there are not a lot of utilities around,” says Wayne Chuko, product manager, The Lincoln Electric Co. “You’re moving around a lot to make welds in various places, some of which are far away from the power source. You don’t want to have to move the power source around to all these places.”

One solution is to use a gas or diesel engine-driven welder. This welder is, in a sense, its own power generator. Another way is to use a power source connected to a generator.

It is common on job sites to use a steel tubular inverter rack to hold the multi-process inverter power sources, typically holding from four to eight machines. A primary power drop goes from the generator to the rack with the inverter welders. Without the rack, each of the welders would have its own primary power drop. This is undesirable because the primary power drop is high voltage, making it more dangerous and costlier as it requires a larger, more expensive cable.

“The voltage is controlled 200 ft. away back at the inverter rack and you’ve added another cable to the mix so now through your 200-ft. span you have two cables,” Chuko says. “If that 200-ft. walk back is over flat ground, it’s pretty easy, but if that 200 ft. includes climbing down four stories or out of a ship’s hull somewhere, it’s much more difficult and dangerous.”

The welder has to set the voltage for the power source at the rack, go out to the weld location, set the wire feed speed and do the weld. Then, he checks to see how it looks and figure out if he needs more or less voltage.

And there are other issues. Once the cable goes out beyond 100 ft., it begins to not operate as well. The signal can degrade, resulting in slower or inaccurate power source response.

If the welder doesn’t want to make that long walk back to the inverter welder, he can call back or motion to a helper to adjust the voltage. But either way, it all takes away from safety, productivity and weld quality on a job site.

To avoid all of these issues, Lincoln’s CrossLinc technology is a smart solution. The technology is defined as a communications protocol that transfers voltage adjustments at the wire feeder to the power source using the standard copper weld power cable. No additional control cable is required. CrossLinc is featured on the Flextec 350X inverter power source and the LN-25X wire feeder.

“The wire feeder itself is powered by the same cable that delivers the welding arc current as opposed to a separate cable,” Chuko says. “All you have running between the wire feeder and inverter rack is a copper cable, which is simple, relatively inexpensive and easy to set up. This means no extra upfront expense, no extra cost to maintain, no doubling up of cables and no additional setup and teardown time.

“But you do have full control over voltage so you can get exactly the voltage you want at the weld location,” he adds.

In addition to safety and productivity, CrossLinc technology also increases weld quality because the welder can easily adjust the parameters to his satisfaction.

“If you had to make that 200-ft. walk a couple of times or call back several times to someone who may or may not be there, depending on what the job is, there could be a temptation to say the weld parameters are close enough, and not make the change,” Chuko says. “In some cases, the weld may actually be good enough, but in other cases, you may find out later on that you made a bad weld that needs to be repaired.”

Another benefit of CrossLinc is that the welder can see what the voltage is in real time while welding. This also allows a welding inspector who is checking the job site to look right at the digital meter and tell if the welder is following the weld procedure specification. 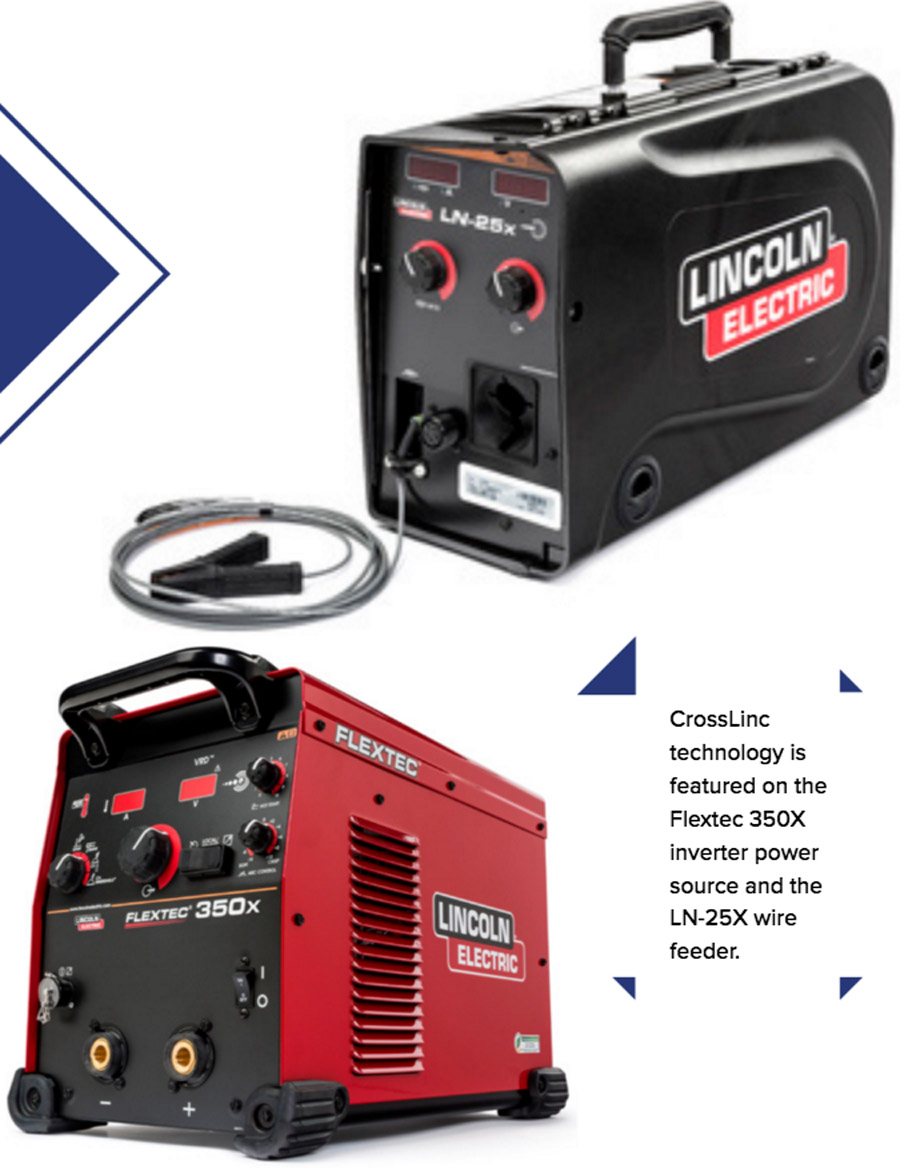 For stick or TIG welding, the CrossLinc Remote is available. The unit has a digital meter and one output knob that controls current (because in stick welding, the current not the voltage is controlled) and that goes in between the weld cable and the electrode holder.

Part of the future

CrossLinc makes the whole job site safer and results in better productivity and better quality. But while common sense would lead one to believe this technology has been a long time coming, Chuko says perhaps there was not really a need for it before now.

“What has happened in recent years and is continuing to happen is that everybody is tracking data and tracking quality much more closely than they used to,” he says. “The technology available today allows for gathering of information that helps improve quality and efficiency in the workplace.”

On the job site, everyone, including the construction company, engineering company and welding company, all answer to someone else. That person at the top might not know much about welding and, therefore, wants to be assured that the building is being constructed the right way. Documentation is a key part. 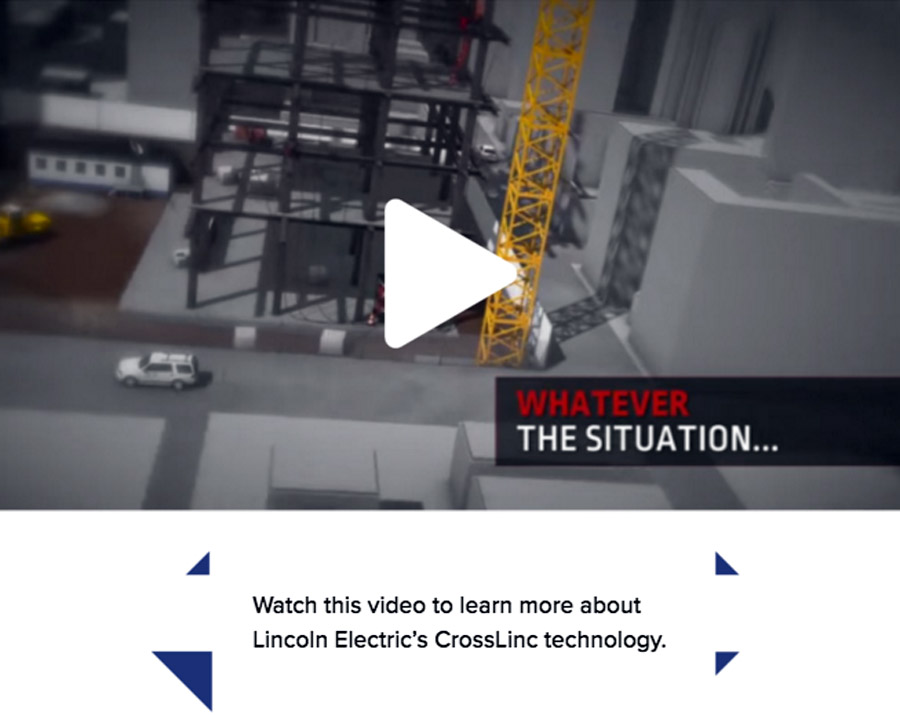 In addition to the Flextec 350X inverter power source, the Flextec 650X is also available. A 650-amp power supply may be more commonly used in the shipbuilding industry.

“It’s not that you typically need the 650 amps to weld; the higher amperage is used for carbon arc gouging, which is a typical part of the process in shipbuilding,” Chuko says.

Lincoln Electric is continuing to build out the equipment offering that includes the CrossLinc feature.  The compliment of equipment will further benefit various types of job-site construction welding.