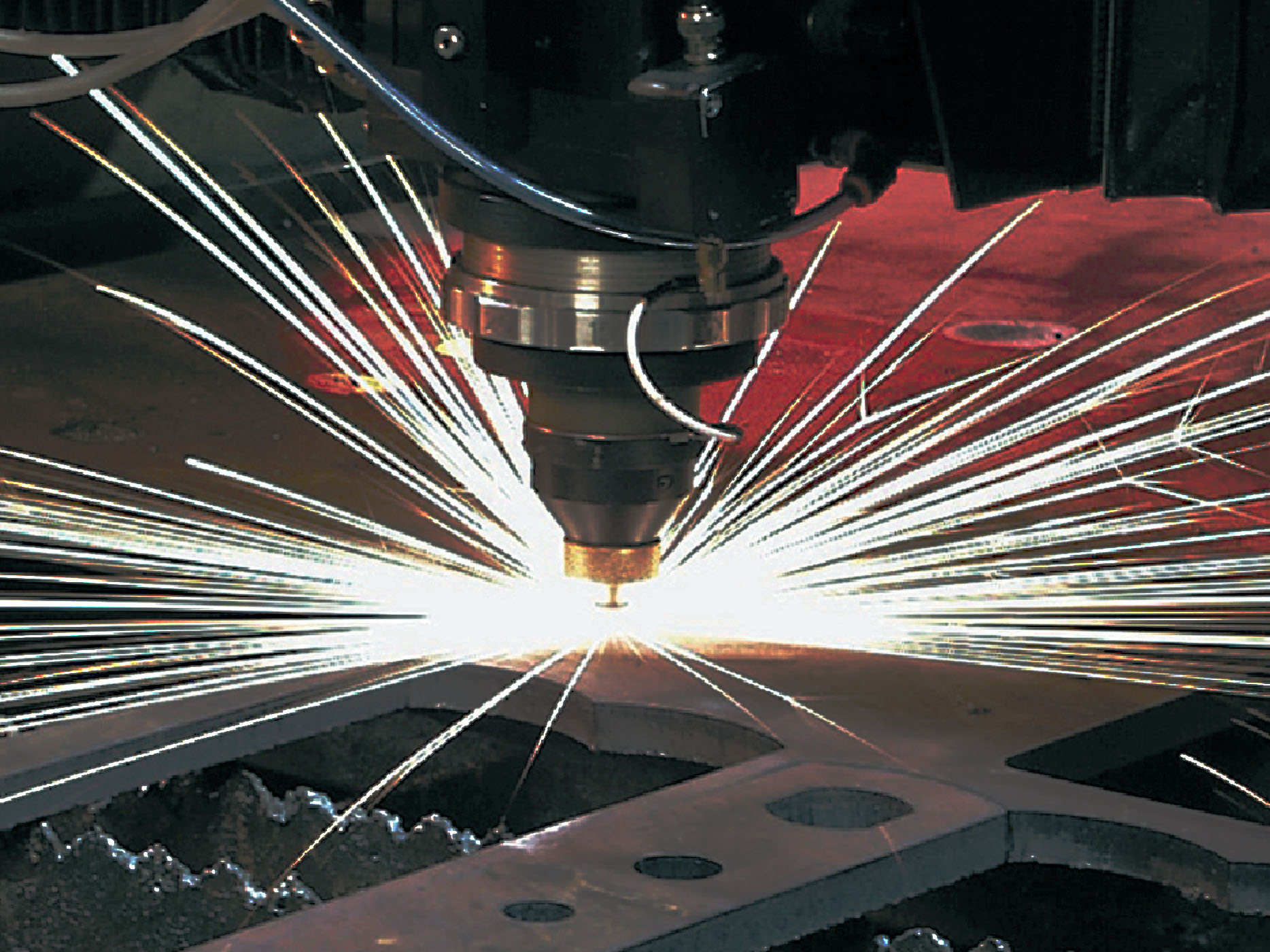 Fabricators using laser cutting or welding systems are likely using Class 3a or Class 4 rated lasing systems, which means that work environments are potentially hazardous and safety programs must be established and overseen by laser safety officers (LSOs). The programs must include standard operating procedures for the safe operation of these devices, and controls must be put into place to protect workers against laser beams that can harm skin tissue and cause severe and likely irreversible eye damage should an accident occur.

To help establish a safety regimen, there are a number of organizations offering laser safety training courses. One of them, the Laser Institute of America, allowed this editor to partake in its online Laser Safety Awareness program to get a better idea not only of the potential hazards of a laser operation, but the many methods to ensure that those who come in contact with these systems are safe.
The course is one of the LIA’s online training modules, and was designed for an LSO who must train staff and wants to do so without bringing in an outside expert or sending personnel to out-of-office training sessions. The short training session, approximately two hours long that can be spread over three days, covers the safety basics for workers operating, or working near, laser systems. 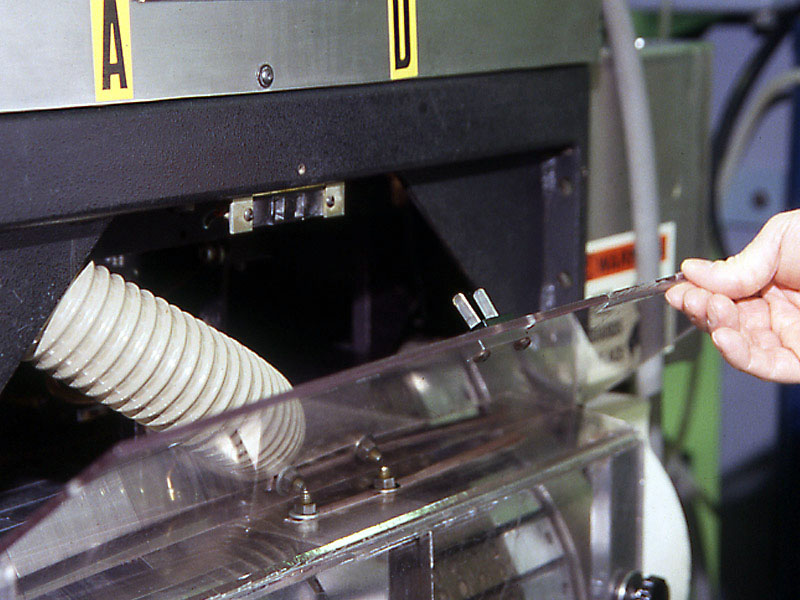 An interlock switch is used to turn off a laser beam such as when a housing door is opened.

The LIA is the secretariat for the American National Standards Institute’s (ANSI) Z136 Safe Use of Lasers standard, which is the foundation for all laser safety standards nationwide. Under this umbrella standard is the ANSI Z136.1–Safe Use of Lasers standard that is designed for use by industrial operations, the military, research and development labs, and universities, says Gus Anibarro, education director for the LIA and the course lecturer.

As secretariat to the standard, the LIA trains more Laser Safety Officers than any other organization in the world, and many laser safety organizations come to LIA for education and training resources, says Anibarro.

The course was designed to be in compliance with the ANSI standard, and students who complete the course and successfully pass a quiz earn certificates. The program focuses on the Z136.1 section that covers industrial uses, among others. Additional courses are geared toward higher-level manufacturing environments, medical facilities and other organizations. For more on those courses, visit www.lia.org.

The Z136 standards, Anibarro notes, are voluntary, but they are recognized by the Occupational Safety and Health Administration (OSHA), and OSHA can enforce the standards by imposing fines under its general duty clause.

The training course is spread through multiple sections and consists of short audio segments that use graphic and video images to illustrate the lesson. Anibarro leads the student through a brief introduction to the physics of lasers and the history of its development.

If you choose to have your employees take the course, the following is a brief summary of what they’ll be taught. There is more: LIA packs a lot into this brief program. But in terms of practical, useable information for shop employees, these are the high points. 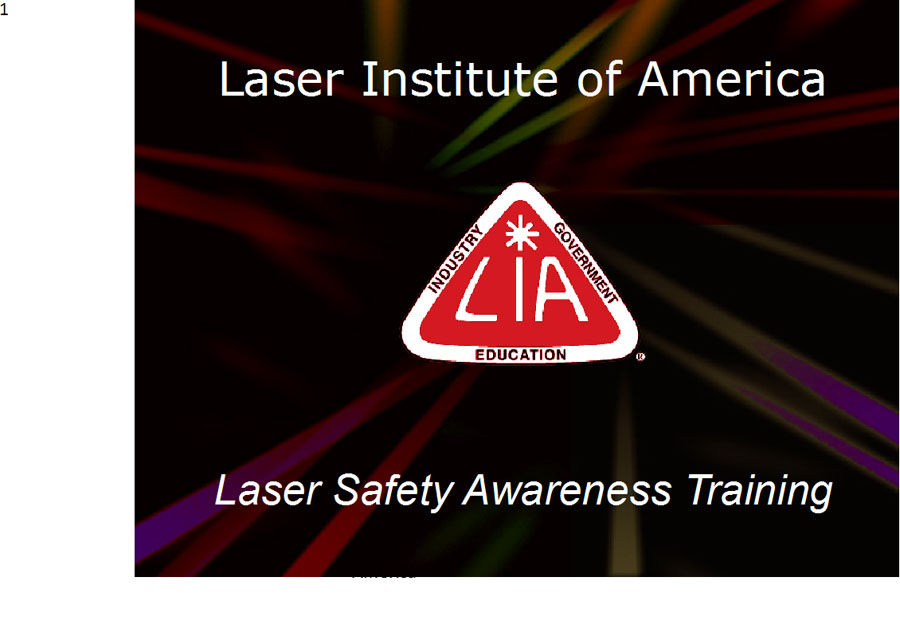 What are the dangers?

Laser hazards can derive from the beam itself or from nonbeam sources. Nonbeam hazards include fire, explosions, electrical shocks, and exposure to potentially toxic or carcinogenic chemicals. Beam hazards are those in which the beam comes into contact with the skin or eye. Beam hazards are addressed in greater detail in this awareness training module.

Lasers have their own peculiarities that make them dangerous, beyond the radiation levels. The way laser light differs from normal light is a good example. Anibarro says that laser light differs from normal light in three ways. It is monochromatic, meaning that it consists of radiation in a single wavelength. It is directional, diverging little even over long distances (1mm every 1m), and can pose a hazard at far distances. It is coherent and can be focused to a much smaller spot diameter than ordinary light and have much high irradiance than ordinary light.

Lasers come in various Classes that range from harmless Class 1 and Class 2, to extremely dangerous, Class 3 and Class 4. Sometimes, they can be both. While a laser may be extremely hazardous in one situation, that same laser, when coupled with administrative and engineering controls and the correct personal protective equipment, becomes a relatively harmless Class 1 laser system. 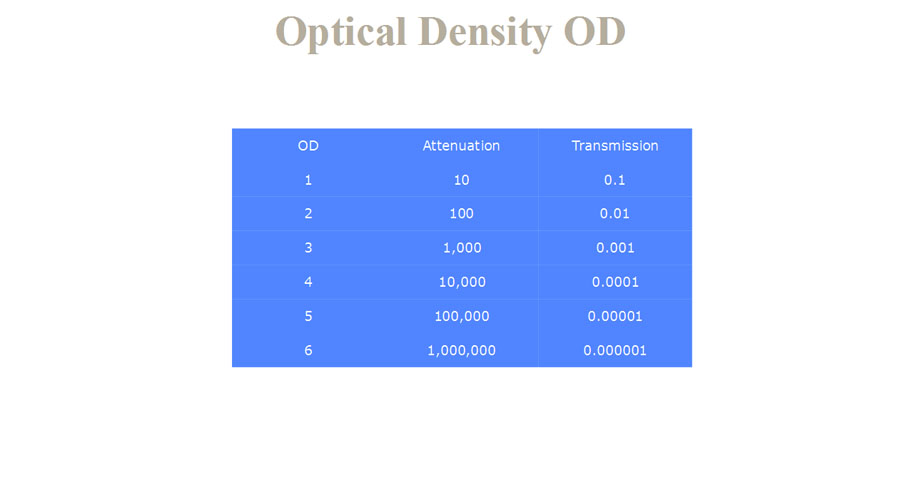 The optical density number should match the OD of the laser in use. Goggles or other protective eyewear that is rated differently than for the laser in use may not provide needed protection.

According to a LIA safety bulletin:

–A Class 1 laser is considered safe based upon current medical knowledge. This Class includes all lasers or laser systems that cannot emit levels of optical radiation above the exposure limits for the eye under any exposure conditions inherent in the design of the laser product. There may be a more hazardous laser embedded in the enclosure of a Class 1 product, but no harmful radiation can escape the enclosure.

–Class 2: A Class 2 laser or laser system must emit a visible laser beam. Because of its brightness, Class 2 laser light will be too dazzling to stare into for extended periods. Momentary viewing is not considered hazardous, since the upper radiant power limit on this type of device is less than the MPE (maximum permissible exposure) for momentary exposure of 0.25 second or less. Intentional extended viewing, however, is considered hazardous.

–Class 3: A Class 3 laser or laser system can emit any wavelength, but it cannot produce a diffuse reflection hazard unless focused or viewed for extended periods at close range. It is also not considered a fire hazard or serious skin hazard. Any continuous wave (CW) laser that is not Class 1 or Class 2 is a Class 3 device if its output power is 0.5 W or less. Since the output beam of such a laser is definitely hazardous for intrabeam viewing, control measures center on eliminating this possibility.

Under ANSI Z136.1, there are different ways to control a laser system to create a safe environment. These methods are generally divided into two categories, engineering controls and administrative/procedural controls. According to the ANSI Z136 standard, engineering controls should be attempted first, but if these controls are found impractical or inadequate, administrative controls should go into effect, such as the use of personal protective equipment, Anibarro says.
Engineering controls include protective housing and interlocks, protective filter installations, key control, and system interlocks. Administrative controls include standard operating procedures (SOPs) and personal protective equipment (PPE). The LSO determines these practices and when they should be implemented through conducting assessments.

The standard requires interlocks on protective housings that enclose Class 3b and Class 4 lasers. One such interlock uses a contact that will break when a door of a protective housing is opened, and automatically shuts off the laser.

There are times when a Class 3b or Class 4 lasers can be enclosed, partially enclosed, or totally open. Totally enclosed laser systems can be considered a Class 1 laser system even if the embedded laser could be a more dangerous Class of laser. Limited open beam paths, such as those often found in an industrial setting, will likely require the LSO to conduct a hazard analysis to determine MPE, and an NHZ assessment.

In the nondefeatable entryway control, hardware will deactivate the laser or reduce it to levels below the MPE. For example, a curtain with an interlock at its top that shuts of the beam is considered nondefeatable. Defeatable controls allow for an override of the entry locks for maintenance.

Procedural controls are policies and procedures that detail operational activities, specific to equipment and practice. They include plans that detail the use of eye protection, flammability hazard prevention, controlled access, and control of the delivery system and beam emissions.

When choosing protective eyewear, not any old lens will do. Protective eyewear in the form of spectacles or goggles with appropriately filtering optics can protect the eyes from the reflected or scattered laser light with a hazardous beam power, as well as from direct exposure to a laser beam. Safety glasses should be worn when engineering controls cannot eliminate exposure that exceeds MPE levels, and the eyewear should be labeled with optical density values and wavelengths that match the laser system in use. For instance, if the eyewear is marked OD4 or greater at 755nm, and the laser requires an OD of 6 or greater at 755nm, the glasses will not provide enough protection.

While there are a number of hazards that go beyond the eye, such as dangers to exposed skin and nonbeam hazards such as fire, most of them can be mitigated by following the common-sense rules laid down by the ANSI standard and outlined in the safety awareness course, as well as subsequent courses on laser safety. As Anibarro put it: these Classes are investments in safety.