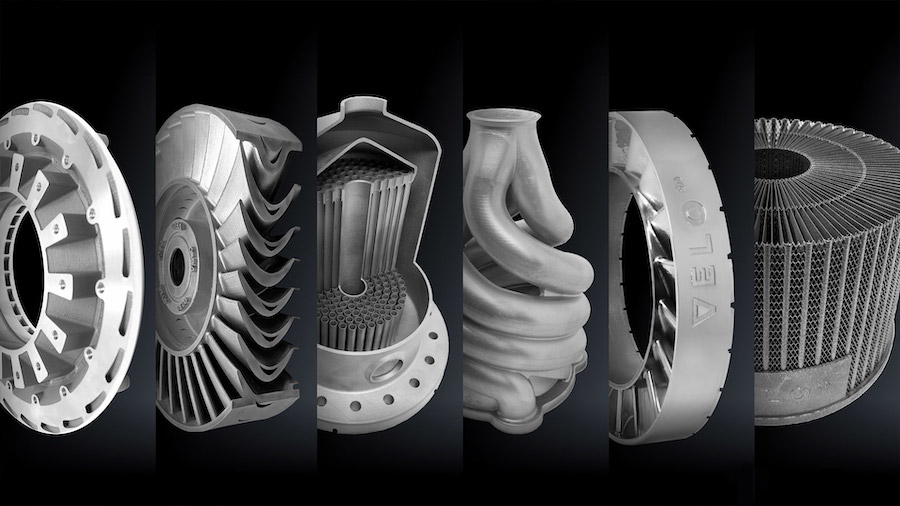 Keeping oil and gas production facilities running smoothly is among the toughest challenges in any industry. Critical process control components inevitability fail under the stresses of the

high pressure and severe service conditions in the O&G environment. Historically, O&G operators have had to implement expensive inventory programs due to average manufacturing lead times not being compatible with operational needs to avoid the risk of an extended shutdown.

The parts placed in inventory are often the same ones chosen back when the facility was first designed; replacements may no longer be available from the manufacturer.  Opportunities to upgrade a component’s design or materials as operating requirements change or next-generation designs are introduced are limited at best. As a result, reliability problems continue and, in some cases, grow worse over time.

Compounding these issues, many sites are located in remote or difficult-to-access locations – such as offshore and the Arctic – that make service and field support problematic. How can those in the O&G industry reliably and quickly provide key parts to facilities in distant corners of the world unless they have stockpiles of inventory at every location?

AM potential and obstacles

O&G operators have become increasingly open to considering 3-D printing, also known as metal additive manufacturing (AM), as a potential answer to such challenges. Not surprisingly, OEMs to the industry are also looking to AM as they evolve along with their O&G customers to achieve more efficient, cost-effective solutions that address ongoing inventory and geographic roadblocks.

There remain, however, some significant obstacles to the widespread adoption of AM in the O&G industry.

Most existing metal AM technologies require extensive knowledge of printing parameter development, which can sometimes be a labor-intensive process and result in challenges to efficiently and rapidly adapt to changing geometries and features. These systems also require significant part redesign for it to be printable, rather than allowing for a part to be printed as originally designed. Additionally, data from throughout the printing process is often not available, which is critical to assess the quality of the end part.

What’s more, a print file set up on one AM machine can’t be used on another one – sometimes even if they’re the same make and model – without user intervention; the result can be an ever-changing file based on individual machine calibration. This creates a digital inventory challenge similar to the current physical inventory one that O&G operators are already dealing with.

Until very recently, there have also been no published guidelines from the American Petroleum Institute (API) for the procurement or specification of AM materials.

“This has been a challenge for users interested in applying more advanced industrial AM technology to applications where the speed and quality it can deliver would be beneficial,” says Steve Freitas, R&D director, IMI Critical Engineering, a company that designs, manufactures and installs customized, highly engineered flow control ​solutions for new plant builds. The company also provides comprehensive plant lifecycle service support.

Fortunately, guidance is now here in the form of API20S, the first-ever O&G industry sanctioned specification for metal AM. Published in October 2021, API20S spells out processes, testing, documentation and traceability, among other requirements for manufacturers of metal AM components being used in O&G facilities of all types.

The API20S draft was drawn up with input from hundreds of companies, ranging from operators to OEMs to AM machine manufacturers. While not detailing complete success criteria (i.e., required mechanical or non-destructive testing acceptance criteria), API20S does outline what kinds of testing and validation will be required, depending on different risk levels within an O&G operation.

IMI Critical, which began looking at AM systems for valve production several years ago, is among those welcoming the guidelines. “It’s only recently that we’ve identified the advanced AM technology that really delivers on its promise,” Freitas says.

Velo3D Inc. is the AM system manufacturer providing the needed level of advanced AM technology to IMI Critical. Partnering with a major O&G operator that is also an API committee

Velo3D is known for its full-stack AM solution that includes automated pre-build system calibration and end-to-end build quality monitoring and reporting – features that deliver the kind of data on which many of the objectives of API20S are based. The long-term goal of the joint project is to build up a compendium of measured field data that will support the path toward certification of production parts for AM as well as the future establishment of more exact specifications for material properties and test methods.

The more immediate benefits of IMI Critical’s work with Velo3D became clear as the project progressed from idea to working parts.

For the team project, the O&G operator selected a commonly installed choke valve cage. The part had been manufactured with simple slotted holes for ports, which can have problems with vibration and damage due to trim erosion in high-pressure-drop operations.

The flow control industry has evolved considerably between the time this legacy part was created and today. One innovation is IMI Critical’s Drag technology, which consists of an array of discrete, multi-stage flow paths that better control fluid velocity and prevent problems with vibration and trim erosion. IMI Critical, having produced metal AM components for years, saw a business opportunity to not only replace a part “on demand,” but also to improve its performance with Drag. The next step was to assess the new design for 3-D printing (see Figure 1) out of Inconel 718.

“Velo3D’s early review of our cage design produced valuable recommendations on how to improve the quality of both the as-built AM part and the final, post-processed machined part,” Freitas says.

With the CAD design complete, it was now time to move to AM. Unlike other metal AM systems, Velo3D’s Flow print preparation software automatically responds to a part’s geometry without any complex part-specific parameter development. Flow does this by applying a generalized set of recipes based on the design’s native CAD geometry and user-defined inputs relating to surfaces of importance. This allows design engineers to focus on their desired end part functionality above all, without the need for complex, pre-print parameter manipulation.

The designer can also use the software to apply and test surface refining subprocesses to choose the best one (see Figure 2). This not only resulted in a quick transition into the first-article section of the project, but it also created a standardized framework to further ease setting up future builds to meet IMI Critical’s specific surface finish and flow characteristic requirements.

“Flow greatly reduces the initial setup time from CAD to print file,” says Zach Walton, director of energy solutions for Velo3D, who worked closely on the project with IMI Critical. “This opens up the ability for design and manufacturing engineers to more easily and efficiently implement metal AM printing. At the same time, our system’s ability to print the same build file on any Velo Sapphire machine, no matter where it is in the world or who is operating it, was very appealing to the O&G operator’s vision for digital inventories and direct part replacement.”

calibration before a build, Assure compiles that data along with a tremendous amount of information collected throughout the build, layer by layer, then automatically generates a build report containing the information of importance,” Walton says.

“The raw data and height mapper images [see Figure 3] were also useful for evaluating and assessing critical areas of the part for future production,” he adds. “In conjunction with the Flow pre-print software, this allows for this same print file to be printed on any Velo3D system no matter who is operating it or where it is in the world – with the same expected end part quality. These capabilities of advanced AM now make digital warehousing and on-demand part replacement achievable.”

Knowing that the print file created during the project can be reprinted on any Velo3D system anywhere now provides tangible support for the development of more robust supply chains as O&G operations start leveraging metal AM for replacement or improvement of legacy parts.

“Now, we can help our customers reduce inventory requirements while providing opportunities to optimize both the functional characteristics and the materials of critical process control components,” Freitas says. “This allows O&G operators to shift their focus away from repair and part supply chain problems and concentrate on improving plant reliability and controlling costs.”

The two first-article choke valve components were successfully printed at the Knust Godwin facility (see Figure 4, left). From there, the valves were removed from the build plate along with the API20S test specimens. They were then machined to final finish (see Figure 4, right) while specimens were tested in accordance with API20S, which showed compliance to IMI Critical’s materials specification.

The valves were then flow tested at IMI Critical (see Figure 5) before being delivered to the O&G operator for use in upcoming field trials.

“This was the first production valve produced using Velo3D technology, and the flow test results were a profound demonstration of the consistency of the generalized processes provided by Flow software,” Freitas says.

As noted, in-field testing is imminent and the goal of bringing similar successes with AM to the industry continues to broaden.

“IMI Critical has a vision to offer its customers much more than just legacy part replacement,” Walton says. “They really want to move existing capabilities forward by continuing to replace outdated parts with updated technology that provides optimal performance.”

IMI Critical is finding that operators whose legacy OEMs can no longer replace those aging designs are becoming more open to technologies like Drag and AM, but they are also demanding those new parts as quickly as possible.

“Here’s where AM can dramatically change the picture,” Walton says. “By using it to deliver Drag-optimized parts in less time than traditional manufacturing methods, IMI Critical can provide its customers with significantly shorter lead times and a much simplified supply chain.”

With initial testing and analysis already deemed successful, these versions are in transit to be run in the field by the O&G operator. Production builds are currently ongoing, leveraging the manufacturing plan established during the first-article build. Additional field testing will also be performed to collect more operational data. The result will be production-ready components, adhering to current API20S standards, that will be put through real-world field trials at one of the operator’s sites.

Following installation and testing of the new choke valve cages in the field location, there will be publication and presentation of results. Going forward, IMI Critical intends to further implement Velo3D’s technology to produce additional trim valves and other components.

“The ability for metal AM to deliver highly customized parts from robust metal alloys in far less time than the traditional supply chain is a benefit that we have been offering to our customers for some time,” Freitas says. “The unique abilities of Velo3D’s next-generation technologies will allow us to minimize the redesign of our products for additive while also reducing the barriers associated with traditional metal additive systems on the build setup, maintenance and supply chain scalability.”

Further advantages from the use of advanced AM will accrue to IMI Critical’s own design exploration work thanks to Velo3D’s ability to manufacture internal channels and overhangs at well below 45-degree angles (even down to zero in the case of IMI Critical’s Drag technology). This will enhance the application of Drag to optimize legacy designs and simplify workflows.

IMI Critical is also planning to leverage the bigger build platform of Velo3D’s XC AM system for larger size flow control elements or greater volumes of smaller ones.

“We are looking forward to continuing our teamwork with Velo3D to produce additional components for O&G and to apply their large build-size capacity to manufacture very big valve components for both the oil and gas and the fossil power markets,” Freitas says.