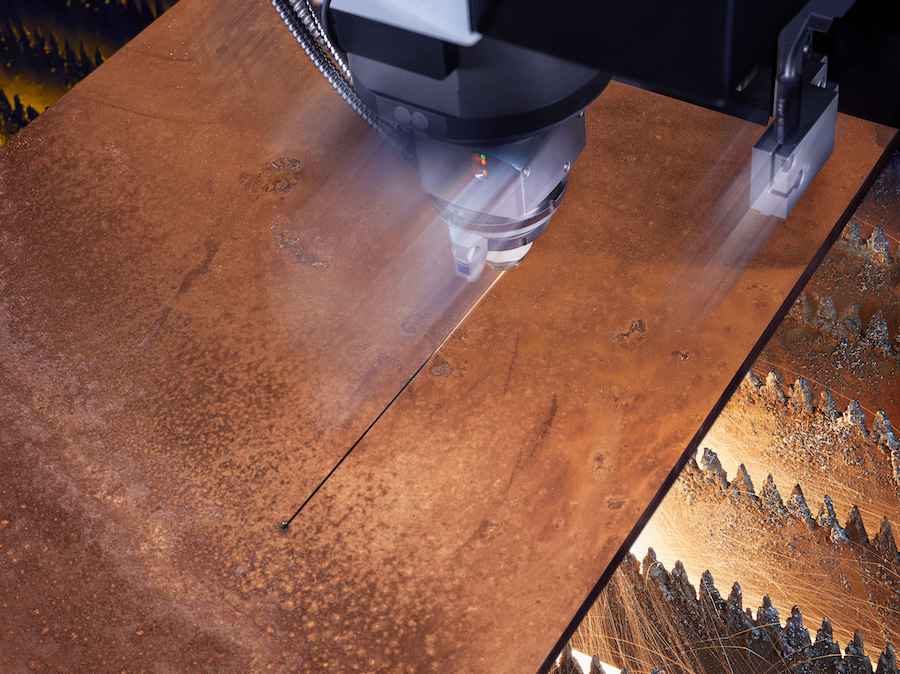 At the risk of stating the obvious, the laser is arguably the heart of any laser cutter, but there’s much more to productive parts processing than kilowatts and beam quality. What’s more important is how many parts there are at the end of each shift, their dimensional accuracy and edge quality, and the cost of making them. Yes, wattage is also important, as evidenced by the introduction of ever more powerful machines with each passing year, yet most industry experts would agree that buying more laser than you need is a waste of money.

“Fiber lasers are basically unlimited in terms of power potential, but higher wattage doesn’t necessarily mean greater throughput,” says Hank White, national project specialist at MC Machinery Systems Inc. “That’s why many machine tool builders, us included, are focusing as much on automation as on laser technology. As with putting high-quality tires on a Ferrari, it’s the investment in automation that provides the manufacturing velocity needed to compete in today’s world.”

Without automation, it’s largely the operator who determines machine utilization levels, he points out. That person must bring raw material to the machine. They must ensure that the correct program is loaded and the machine cycled in a timely manner, and then they are responsible for taking finished parts away. If an operator’s taking a break, on vacation or home sick, productivity suffers.

However, even on a good day, the typical green light time in most shops is less than 50 percent. “Adding a simple sheet load/unload system to any laser can increase that number to 80 percent or more,” White says.

It should be noted that each of the machine tool builders interviewed for this article offers such load/unload capabilities, MC Machinery included. But what good does it do to cut nearly twice as many parts per hour only to have them sitting on a pallet, waiting to be separated from the nest?

MC Machinery’s solution to this problem is the Astes 4, “a fully integrated system for cutting, sorting and storing of sheet metal,” and the SmartFlex APP (short for Automated Part Picker), said to bring increased intelligence to what has long been a laborious, error-prone task. “Robots and automated parts sorting have been around a long time,” White says. “The problem is, the software used to drive those robots hasn’t been smart enough.”

Intelligent software like that used in these systems looks at the entire manufacturing process, White explains. It knows what jobs are due, what material and operations are needed to produce them, and where each of those operations is performed. It tells the robot the correct order to de-nest parts, what skid or bin to put them in and in what orientation. And when all of the parts needed for a job, assembly or secondary process are ready, the software alerts an operator to bring them to the correct location.

Tim Tapper, applications manager at Mazak Optonics Corp., notes that the company’s SortFlex system, introduced at Fabtech 2019, performs much the same function. “It has part rotation and stacking capabilities, so it can place all the like parts in one pile, even if they’re cut at different orientations. It can sort as well, allowing the operator to select whatever parts or nests are needed now and possibly store the rest in a different location for later.”

“What we’ve seen in the industry is that machines are ever faster and more productive,” says Mark Bronski, TruLaser product group manager for Trumpf North America. “They’re able to process an ever-increasing variety of parts that might need to go to different places in the shop – some might go to painting, others to deburring or welding, with jobs often scattered across multiple sheets of material. The Sorting Guide makes it easier for operators to select the right parts quickly and make sure they end up in the right location.”

It does this via an artificial intelligence-supported, high-resolution camera that monitors operator activity, then uses a color-coded display system to indicate which parts should be picked and in what sequence.

Says Bronski, “This is a huge departure from how these systems worked in the past, where the machine told the operator, ‘You have to pick this part, you have to find all of them, and you then have to put them somewhere else before moving on to the next part.’ Our solution gives operators the own freedom to pick and choose based on their production needs, not those of the machine.”

Another increasingly common feature with laser cutting is beam shaping, also called mode shaping. Nikki Amico, laser product manager at Bystronic Inc., notes that the latter provides a beam shape somewhere between fiber and CO2, with edge quality equivalent to or better than CO2 when using oxygen to cut thick mild steel. That said, Amico is quick to point out that nitrogen remains the first choice of assist gases for many shops. “As we use fiber technology to its fullest, nitrogen to cut thicker and thicker materials is always a top request from our customers,” she says.

Whatever the gas, Mazak’s Tapper agrees with the need for beam shaping. “It allows a fiber laser to more accurately simulate the cut quality of a CO2 lasers,” he says. “This is particularly helpful when cutting thick plate with oxygen and stainless steel with nitrogen. In either case, it generates a very smooth, clean edge.”

MC Machinery refers to this as TEM01 mode, which White says resembles a donut. “Generally speaking, the beam on a fiber laser has a flat, round shape, something we call TEM00 mode. But because we’re able to adjust the beam size and focal length dynamically, we can replicate the donut shape of a CO2 laser, improving edge quality and greatly reducing taper in thicker materials.”

Another notable beam technology is Trumpf’s Active Speed Control, a vision-based system that looks through the cutting lens into the kerf. Depending on what it sees, it speeds up until it reaches a preset maximum feed rate or slows down if it sees the cut deteriorating.

“The benefits are obvious,” says Bronski. “If the table is programmed to cut at 100 ipm, for example, but can now achieve 110 imp reliably, that’s money in the bank. Conversely, if the material thickness is inconsistent or maybe you hit a rusty patch, the control will adjust accordingly. It can make the difference between machining unattended or not.”

cutting aluminum. Since then, they’ve found it offers similar benefits on fiber lasers, not only with burr reduction but increased feed rates as well as lower operating costs due to lower gas consumption.

“Customers should know that the air must be very clean and dry and that they may still have to evaluate parts prior to paint processes because air itself contains approximately 20 percent oxygen,” she says. “We’ve also seen good results by mixing shop air with other gases, such as a tightly controlled amount of oxygen. Customers are encouraged to evaluate these technologies and consult with their paint vendor to validate its effects on their process, as each application is different.”

Mazak also offers air cutting, developed to offset the relatively high cost of nitrogen consumed by fiber lasers. “When shops get their first fiber laser, that first gas bill can be a little alarming,” Tapper says. “Granted, that cost is offset by a fiber laser’s higher cutting speeds, but that was the reason we started exploring high-pressure air assist.”

By equipping their machines with a system that outputs high volumes of 400-psi compressed air, Mazak has seen some shops cut their laser’s operating cost by $25 per hour or more, increase feed rates and produce paintable, weldable edges to boot. Notes Tapper, “Most customers are looking at a year, maybe a year and a half turnaround on the investment.”

MC Machinery’s White agrees on the need to reduce processing costs where possible. To this end, the company has developed a proprietary nozzle technology that improves gas flow. The result is up to a 75 percent reduction in nitrogen consumption for certain materials and thicknesses.

“Despite their many benefits, fiber lasers do consume more nitrogen,” he adds. “The wavelength is shorter, the kerf is smaller and it generally requires higher pressure to clear the material out. This is why we and others continue to work on different types of delivery methods, whether it’s air cutting, using various gas mixes or, in this case, fine-tuning our nozzle geometry. Based on the application, all can provide a range of improvements.”