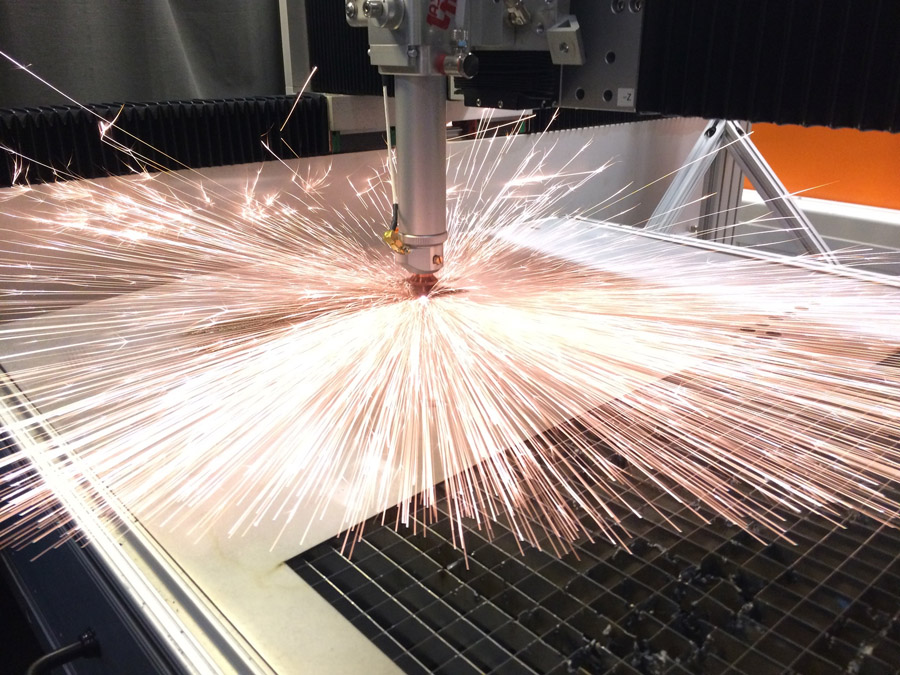 In many fabrication shops today, lasers churn out stacks of parts day after day. Despite being relatively recent additions to the fabricator’s toolbox, lasers have become the dependable workhorses of sheet metal cutting and welding. They should be expected to be found at any high-volume fabrication shop.

Driving drastic improvements in productivity, dependability and cost, lasers have secured their position as a mainstay in modern manufacturing. Furthermore, lasers are enabling advanced fabrication methods that were not possible using previous technologies, such as additive manufacturing, remote cutting and welding, and automated and robotic production. 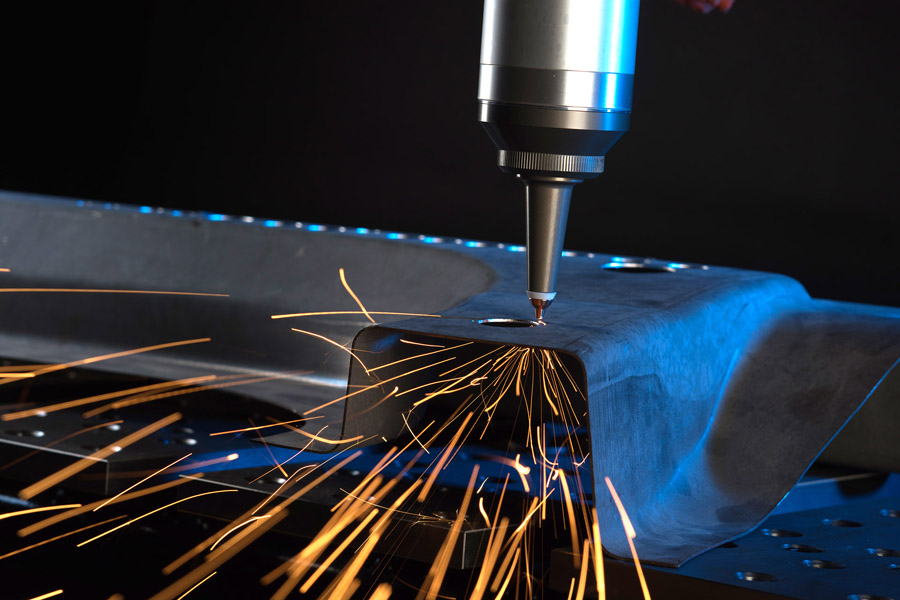 3-D cutting of hot-stamped steel is just one of the many applications suitable for today’s industrial lasers.

Lasers were first demonstrated in the early 1960s. Increases in laser power and efficiency, critical for industrial processes, led to limited adoption for applications such as welding and cutting, mostly using CO2 lasers. Although they provided valuable productivity for niche manufacturing applications, these lasers were expensive to purchase and operate, required expertly trained technicians and were difficult to maintain in a production environment.

As the power of CO2 lasers continued to increase, by the 1980s they were the most common high-power laser technology used in industrial applications. However, CO2 lasers consume high volumes of expensive gas and require costly maintenance, including replacement of vacuum pumps, blowers and electrodes and the cleaning and alignment of the mirrors to maintain stable operation.

In the 1990s, lamp-pumped Nd:YAG lasers emerged. These solid-state lasers do not require consumable gases and can be delivered via flexible fiber optic cables instead of mirrors, making them easy to integrate into robotic applications. However, their beam quality and efficiency are inferior to CO2 lasers, and routine maintenance is required.

As the attainable Nd:YAG power increased, inroads were made into some applications, particularly welding. But power scaling was limited by degradation of the beam quality and other performance characteristics because of the difficulty to extract heat from the gain medium. 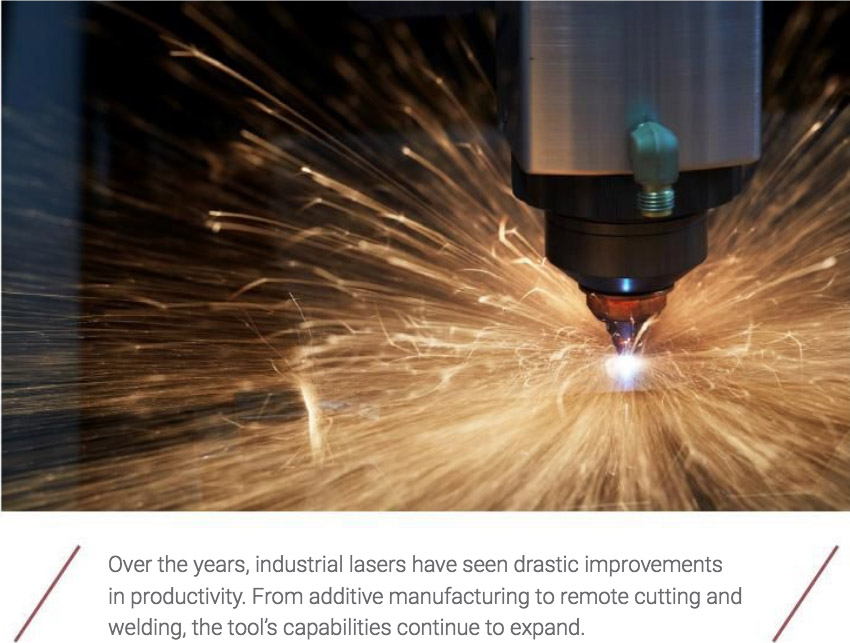 Semiconductor lasers, also known as diode lasers, began replacing lamps for pumping Nd:YAG lasers in the 1990s. Pumping with diode lasers provides higher wall-plug efficiency because they convert electricity to light more efficiently than do lamps and their output is more fully absorbed. However, the maximum power and beam quality of diode-pumped solid-state lasers are still limited by heat removal from the gain medium, and they experience the standard alignment, contamination and maintenance problems of lasers with free-space optical beam paths, as well.

In the late 1990s, significant improvements in laser technology were being realized for a completely different industry – fiber optic telecommunications. Advances in multiple optical technologies contributed to the telecom boom and key among them was the diode-pumped fiber amplifier.

Additionally, fiber coupling is highly efficient because the laser beam is generated in an optical fiber. Significant telecom investments resulted in dramatic increases in diode power and the life of the equipment. Telecom fiber amplifiers typically operate at power levels below 1 W and thus are not suitable for most industrial applications.

In the 2000s, investments primarily by government agencies continued advancing the power and performance of diode lasers. For example, Figure 1 shows the power available from a diode laser operated at about 915 nm and coupled into a 105-micron fiber. Power growth has been nearly exponential. nLight Inc., a provider of high-power semiconductor diode and fiber lasers, recently reported 315 W (a further power increase of nearly 60 percent), continuing this trend [1].

Fiber lasers leveraged advances in diode lasers along with developments in optical fibers, fiber-based components and fiber processing methods to scale attainable power to levels suitable for industrial processes such as metal cutting and welding [2, 3].

Figure 2 shows the steady increase of fiber laser power, reaching 1 kW in 2004 and 100 kW in 2013 [4]. In fact, fiber lasers have been the highest growth segment of the laser industry for more than a decade, taking market share from other laser technologies and from non-laser technologies, such as plasma cutting and arc welding. 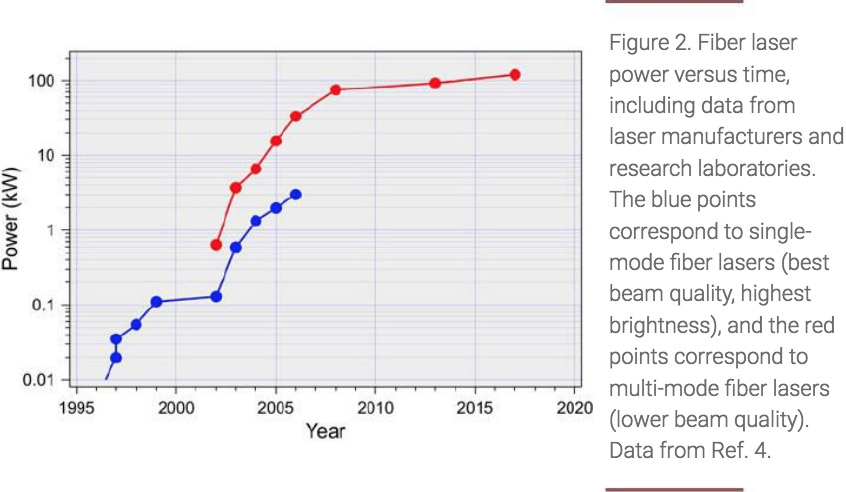 Disk lasers also leveraged advances in diode-pumped lasers but took a different approach to facilitating heat removal by formatting the gain medium as a thin disk rather than a fiber. This approach resulted in power scaling to the multi-kilowatt level, but generally with lower efficiency and beam quality than fiber lasers and still requiring free-space optical paths.

As the power of diode lasers has continued to increase, they have been able to directly address some industrial applications. Further increases in diode power will continue to be leveraged by fiber, disk and direct diode lasers, but fiber and disk lasers still produce higher brilliance, also called brightness (smaller spot size and higher optical power density at the workpiece), making them more versatile for many industrial applications. 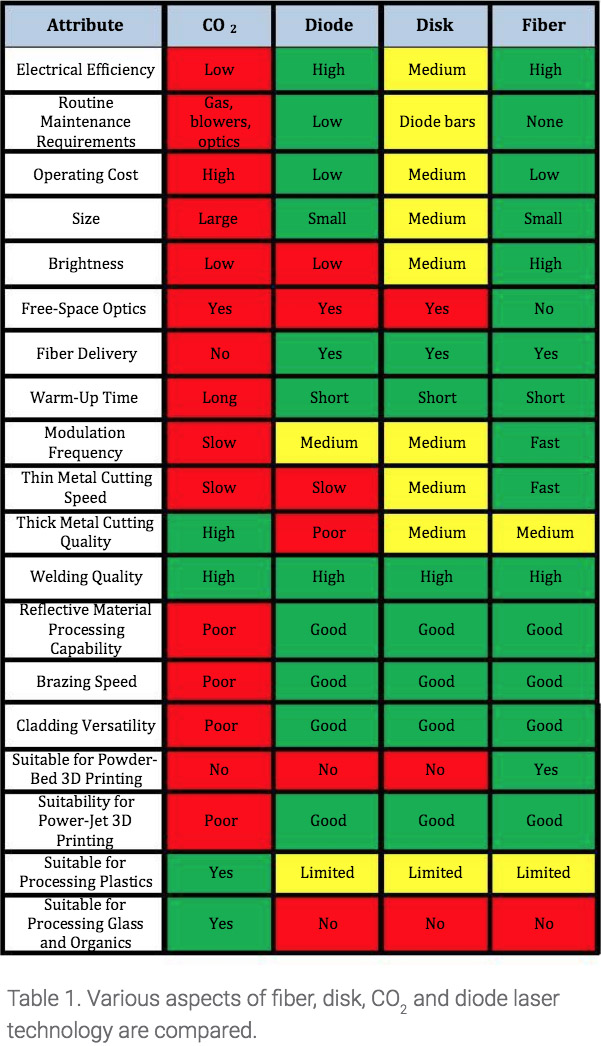 As laser technologies have continued to evolve, so too has the manufacturing landscape. Fabricators face increasing price, precision and productivity pressures from both domestic and global competition. This situation has forced more process automation, for which modern industrial lasers are perfectly suited and at times even required. Today’s primary laser technologies for industrial processing are fiber, disk, CO2 and diode.

Much has been written comparing the performance and practicality of various industrial laser technologies. Table 1 summarizes these comparisons in a manner that is quick and easy to see.

Metal cutting is the largest use of industrial lasers. After entering the cutting market in the mid-2000s, fiber lasers quickly overtook CO2 lasers and now dominate this application. The high cutting speed and low operating and maintenance costs provide a low cost per part, making fiber lasers ideal for this application. 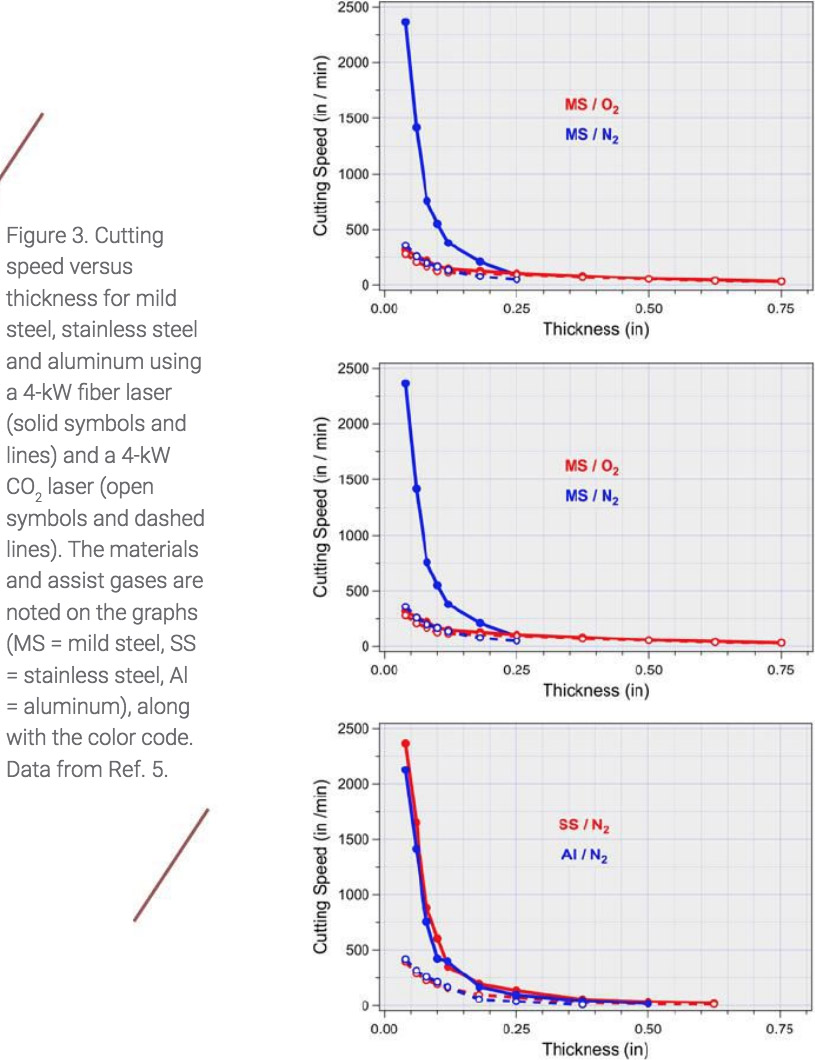 High-energy-density welding was once dominated by CO2 lasers and electron beam systems that require operation in a vacuum, but this type of welding is now transitioning to fiber lasers because of lower cost and the versatility offered by excellent beam quality and fiber delivery.

In regard to reflective metals, such as copper, CO2 lasers cannot process them because the wavelength of the laser (about 10 microns) does not couple well to the material. Although the fiber laser wavelength (about 1 micron) is more highly absorbed, some fiber laser technologies suffer from excessive sensitivity to back-reflections, limiting their ability to process reflective materials.

nLight’s fiber lasers have addressed this shortcoming and are now routinely used to cut and weld aluminum, brass, copper, silver and gold [9]. Manufacturing of lithium-ion batteries for electric vehicles is an application that leverages this capability to provide lower costs, increased design flexibility and more consistent quality [1].

Brazing, cladding and heating applications require relatively low brightness and are thus excellent applications for diode lasers. The higher brightness of fiber and disk lasers can be degraded by launching their output into larger fibers or by beam-shaping optics, making these sources more versatile, but diode lasers (direct from diode bars or fiber delivered) are more widely used for these applications. 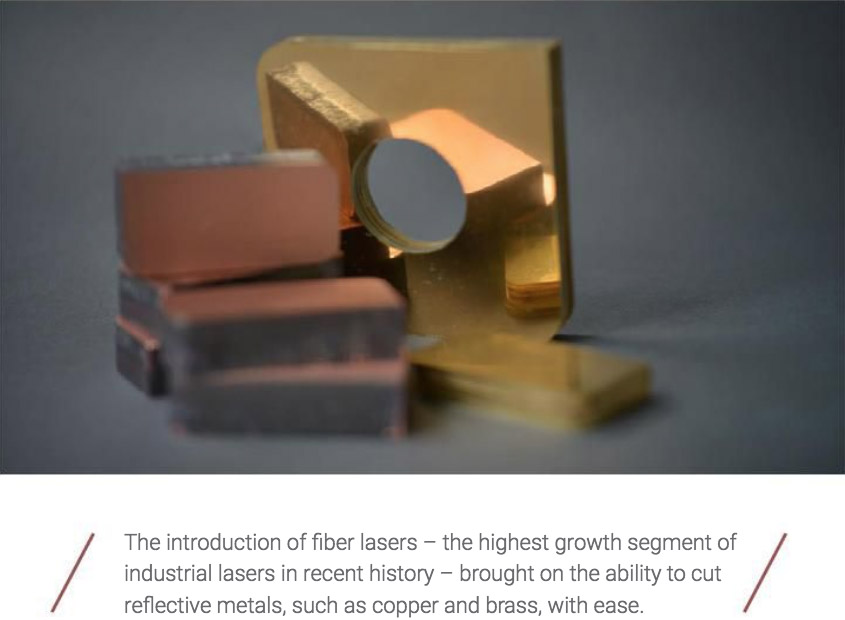 The evolution of lasers from a scientific curiosity into an indispensable industrial tool has been driven by advances in performance, reliability and practicality resulting in higher quality, higher precision and lower cost manufacturing. Key technology advances include:

Fiber lasers in particular have benefited from these advances and are coming to dominate industrial materials processing, although other laser technologies continue to advance and offer advantages in some applications. Rapid innovation will drive further adoption of lasers into both existing and emerging applications, ensuring lasers will continue to transform the industrial manufacturing landscape.