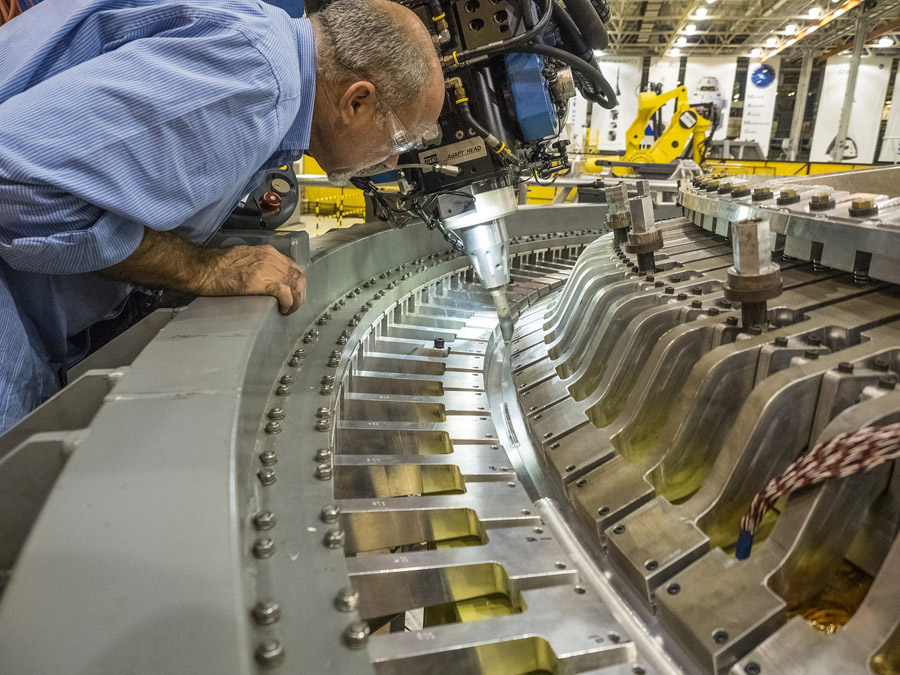 The aft bulkhead is being welded to the barrel of the Orion pressure vessel at the Michoud Assembly Facility in New Orleans, Louisiana. Photo: NASA / Radislav Sinyak

NASA is planning to return astronauts to space in a far-flung trip that is scheduled over a series to test flights to land mankind on Mars. And, this evolutionary event is being helped along by an evolving welding technology.

The technology is friction stir welding (FSW), a joining process adopted by NASA and its contractor Lockheed Martin to join large components of its next generation space launch system, the Orion, because of the weld’s ability to withstand the rigors of space. It’s proving its capabilities during rigorous pre-flight testing here on earth.

Exploration Mission 1, the next test version of the Orion spacecraft, which is the first extra-orbital craft designed to carry humans since the Apollo missions of the 1960s and 70s, is currently under construction. This is the third prototype of the spacecraft built by NASA, and with each version designers reduced the number of components and the resulting number of welds required to join them together.

The original design called for 33 welds and this number was whittled down to just 7 welds. Additional smaller welds are necessary to fill start and stop holes left by the welding tools. 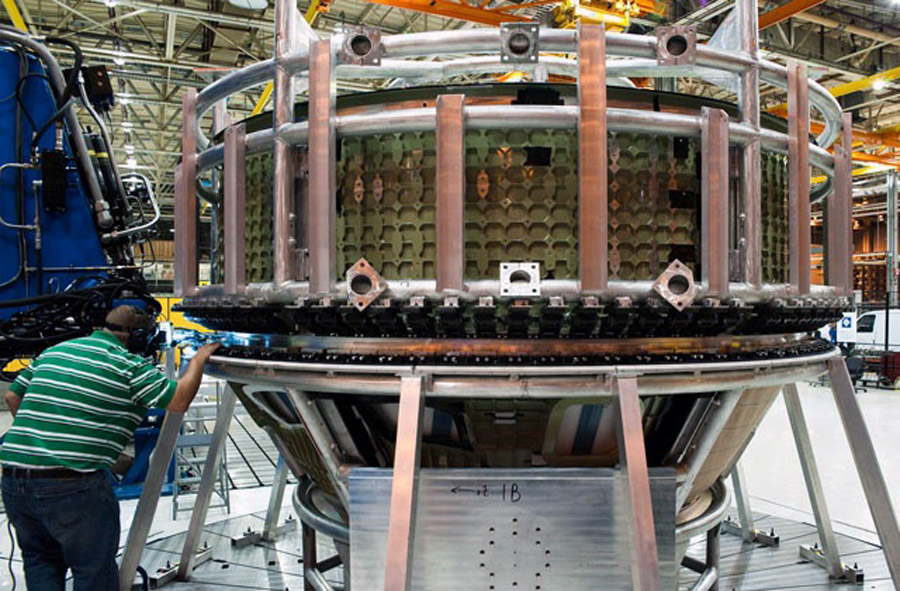 The 445-in. long friction stir weld used to join the bulkhead and nosecone of the Orion spacecraft is the longest of its kind. Photo: NASA / Radislav Sinyak

NASA has used versions of the FSW technology for decades. For instance, the technology was used to weld the Space Shuttle’s external tanks. “The friction stir welding process was chosen for the Space Launch System (SLS) because it improves strength and reliability by offering a lighter mass and protecting better against cracks and leakage,” said Allison Rakes, Lockheed Martin Orion spokesperson.

The components are comprised of an aluminum-lithium alloy (2195) that features a high strength-to-weight ratio, said Rachel Kraft, NASA spokesperson. Orion’s primary structure is composed of seven large pieces that are put together in detailed order (see Diagram, page xx). The reduction in welds is one of the main actions that reduced the weight of the capsule by 700 lb.

FSW was invented at The Welding Institute (TWI), UK, in 1991 as a solid-state joining technique. 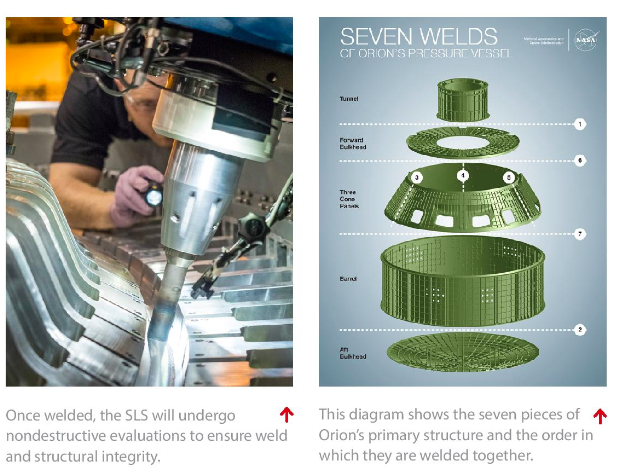 During the FSW process, a rotating tool is plunged into the metal, and friction heat is generated. The tool produces severe plastic deformation under high pressures, during which the weld interfaces are stirred together and a homogeneous structure is formed. Essentially, the heat generated by the spinning probe softens the metal and causes it to flow. Coalescence is achieved when the softened metal behind the moving probe solidifies into a single product.

Over the years, the technology has evolved. NASA now uses what is called self-reacting friction stir welding. In the self-reacting friction stir welding technique, two opposing shoulders are employed on the crown and root side of the weld joint with the forge force acting against the crown shoulder portion of the weld pin tool by the root shoulder. This eliminates the need for a stout tool, which reduces the overall process cost, according to a NASA primer on the topic.

The first weld connected the tunnel to Orion’s forward bulkhead, which houses many critical components including the parachutes used for recovering the capsule. The tunnel is the primary passageway when Orion is connected to other spacecraft. It allows astronauts and cargo to be passed from one vehicle to the other. In September, technicians joined the spacecraft’s barrel section, which is the round middle part of the spacecraft, to the aft bulkhead, which is the bottom portion of the crew module. Orion’s three cone panels next will be welded together.

The welds will undergo nondestructive evaluations that will validate the strength and integrity of the weld before the spacecraft is prepped for testing in flight-like environments, including static vibration, acoustics and water landing tests.

In previous testing, a series of leak and proof pressure tests validated weld strength and advanced aluminum-lithium alloy based structural design. The spacecraft tolerated maximum flight operating pressures as it was incrementally pressurized with breathing air up to 15.55 lb/in2.

Test engineers monitored and collected data from 600 channels of instrumentation to support structural margin assessments and confirm structural integrity – one step toward ensuring the spacecraft can withstand the harsh environments on long duration missions.

The mission is scheduled for some time in 2020, and is designed to go farther than humans have ever traveled, well beyond the moon, pushing the boundaries of spaceflight to new heights.