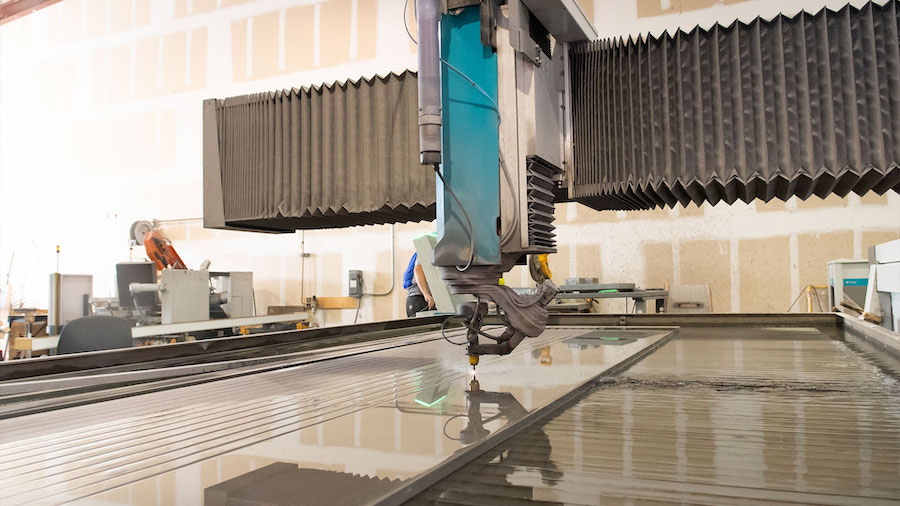 Successful startups are a rarity – roughly 90 percent of them fail. Viv Helwig, president and founder of Vested Metals International, can attest to the difficulties of starting a company from

scratch. In fact, it was just shy of a year after he opened his business in 2014 that he stopped taking a paycheck and braced for what felt like an inevitable impact with failure. With some perseverance and the addition of advanced cutting technology, however, his company became a success story instead.

But long before that success, there were plenty of nail-biting moments. When asked about those first-year milestones, Helwig says he hit all the wrong ones.

After graduating from college in 2008, Helwig worked in sales for a Pennsylvania-based steel mill for five years. He got to know the exotic alloys industry quite well and had a plan to purchase a distributor. When those plans fell through, Helwig established Vested Metals International, working out of 100-sq.-ft. rented office in Weston, Fla.

“A year in and we were out money and getting ready to shut things down,” Helwig says. “But then a check showed up from the bank.”

The check was basically surprise money tied to a house he and his wife had sold years earlier. They unknowingly overpaid on escrow and insurance, so the bank finally tracked them down and delivered the check. The timing couldn’t have been better – Helwig had stopped taking a paycheck the week prior. Now with a little cash to back him up, he kept on with his business and things started going his way.

Vested Metals is now listed at No. 1,361 on the 2021 Inc. 5,000 list, which lists the fastest-growing privately held companies in the United States. Helwig and his team have experienced a 350 percent three-year growth rate since being added to Inc. 5000’s list. He says it’s a testament to their dedication to working hard, as well as the growth in the industries they serve, which are industrial markets, aerospace, defense and medical.

Taking a big leap from that tiny 100-sq.-ft. office, Vested Metals now occupies 12,000 sq. ft. of space in an industrial park in St. Augustine and there are plans to add more next year.

“We had to have other people do the cutting for us or buy material already cut,” he says.

By 2019, convinced it was time to move beyond the miter saw and bring in more advanced cutting solutions, Helwig attended Fabtech in Chicago with an eye on waterjet technology. He looked into four or five waterjet companies and learned more about what waterjets could do, particularly with exotic alloys. With 80-plus percent of his business tied up in producing material for medical devices, he needed cutting technology that could handle alloys like titanium.

Helwig chose Flow’s Mach 200 model and took delivery of it in March 2020. The waterjet machine is equipped with a 30-hp motor, 60,000-psi pump and Flow’s Pivot+Dynamic 5-axis cutting head for cutting thicker material at a faster rate and tighter tolerances. The cutting head offers a simplified and low-profile design for 5-axis cutting with taper control. It allows users to cut flat stock, bevels (60 degrees of motion) and diverse geometry parts. With minimal fittings, the compact head offers a more efficient and reliable cutting solution.

The Mach 200 is designed for flexibility with three-sided access for easy material loading and unloading. It also has an IP67 rating, which means it will hold up under daily, rigorous use in harsh environments.

At the same time Helwig bought the waterjet, he acquired a Kasto A2.6 automated bandsaw that complements the waterjet. An automated bandsaw would allow Vested Metals to become a “full-line distributor, moving more into inventory,” and enable the company to cut flat roll, rounds, bars and other material. Some of Helwig’s customers require plates cut into flat bars and then into small lengths, which requires the saw and the waterjet working in tandem.

“The two machines together have allowed us to completely transform the way we do business,” he says.

While researching cutting technologies, Helwig looked into plate saws, which he says are about twice the cost of a waterjet. In addition to the lower cost, some customers “were requiring some tight tolerances that a plate saw wouldn’t hold,” so the waterjet became the obvious choice. But there is also the issue of scrap to consider, and when the material being cut is an expensive exotic alloy, money is lost on every inefficient cut.

Helwig is considering investing in another waterjet, perhaps by the end of 2022. He’s looking at a more powerful 90,000-psi pump as the company is pursuing defense contracts that will

require working with different types of exotics, such as nickel-based and cobalt-based alloys.

“We’re also potentially looking at thicker material,” he says of the reason to bring in a more powerful pump. “Currently, once we get over 5/8-in.- or 1-in.-thick material, we’re slower.”

Also, with the tight tolerances customers require, Vested Metals is using the current waterjet at around 80 percent power to maintain the kerf and tolerances.

“The waterjet isn’t made to cut at 100 percent and maintain what we need to maintain,” Helwig says, “especially not in the thicker material ranges.”

As Helwig and his team continue to pursue new business and invest in cutting solutions, it’s likely they’ll continue achieving accolades, such as being listed No. 24 in the Jacksonville Business Journal’s 2021 “Fast 50.” This is the third year the company has made the list. Helwig has also been named as a finalist in the prestigious Ernst & Young Entrepreneur of the year 2021 Florida award.