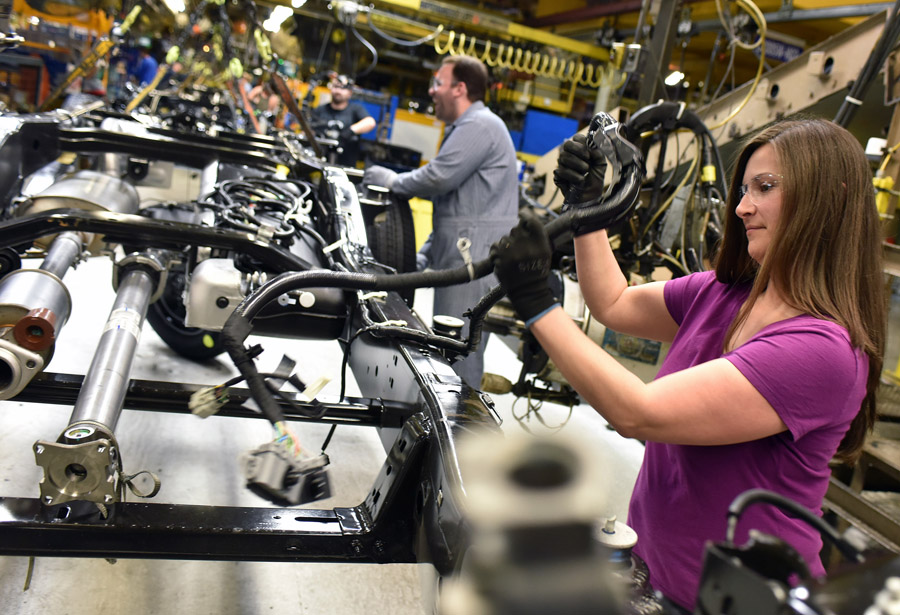 Automotive safety engineers call them ATDs, short for full-scale anthropomorphic test devices. The rest of us know them as crash test dummies. Whatever they’re called, automakers have been using these complex devices for decades, strapping them into cars and watching what happens when high-speed metal slams into simulated human beings. Their aim is simple: to make car owners and their precious cargo safer.

But what about the people who assemble those cars? According to the Bureau of Labor Statistics, 2.8 million nonfatal workplace injuries occurred in 2015 alone. These include carpal tunnel syndrome, rotator cuff injuries, spinal compression and a host of other serious conditions, many of which were caused by repetitive motion or overexertion. The result is worker hardship, production delays and increased insurance premiums all-around.

Ford Motor Co. has been working for decades to change all that, and since 2003 has reduced the injury rate for its “industrial athletes” by more than 70 percent. Allison Stephens, global technical specialist in assembly ergonomics at Ford’s Advanced Engineering & Technology department, says this has been accomplished through a variety of techniques, including analysis of workers’ movements in the company’s motion capture lab, which is powered by digital cameras and motion tracking software from Motion Analysis Corp. (MAC).

“Motion capture is a lot like video gaming,” she says. “We suit up an engineer or operator with markers so we can track their motions, then tell them to reach over to where a hose will be installed or try to insert an electrical connector. It helps us understand the actions that are required to manipulate a part, how well they can see what they’re doing and whether we need to redesign a component to make assembly easier. This information is then applied during new vehicle planning.”

Because these analyses are often done in the vehicle design stage, much of it is make-believe. Virtual reality headsets immerse an operator in a futuristic workspace with motion cameras tracking their every move. And 3-D printers are used to construct mockups of vehicle components, simulating a tight corner in an engine compartment or a hard-to-reach bolt on an undercarriage.

Stephens says the data she and her team collect is fed into a series of analysis tools. One of these is Jack, a human simulation tool from software provider Siemens PLM.

“The advantage of working with a human model is that I can get information on the compression within his spine or how much weight he’s lifting,” she says. “These and other tools available in the virtual manufacturing world allow us to get a glimpse of what our workers will face on a vehicle model that’s still three to four years from production.” 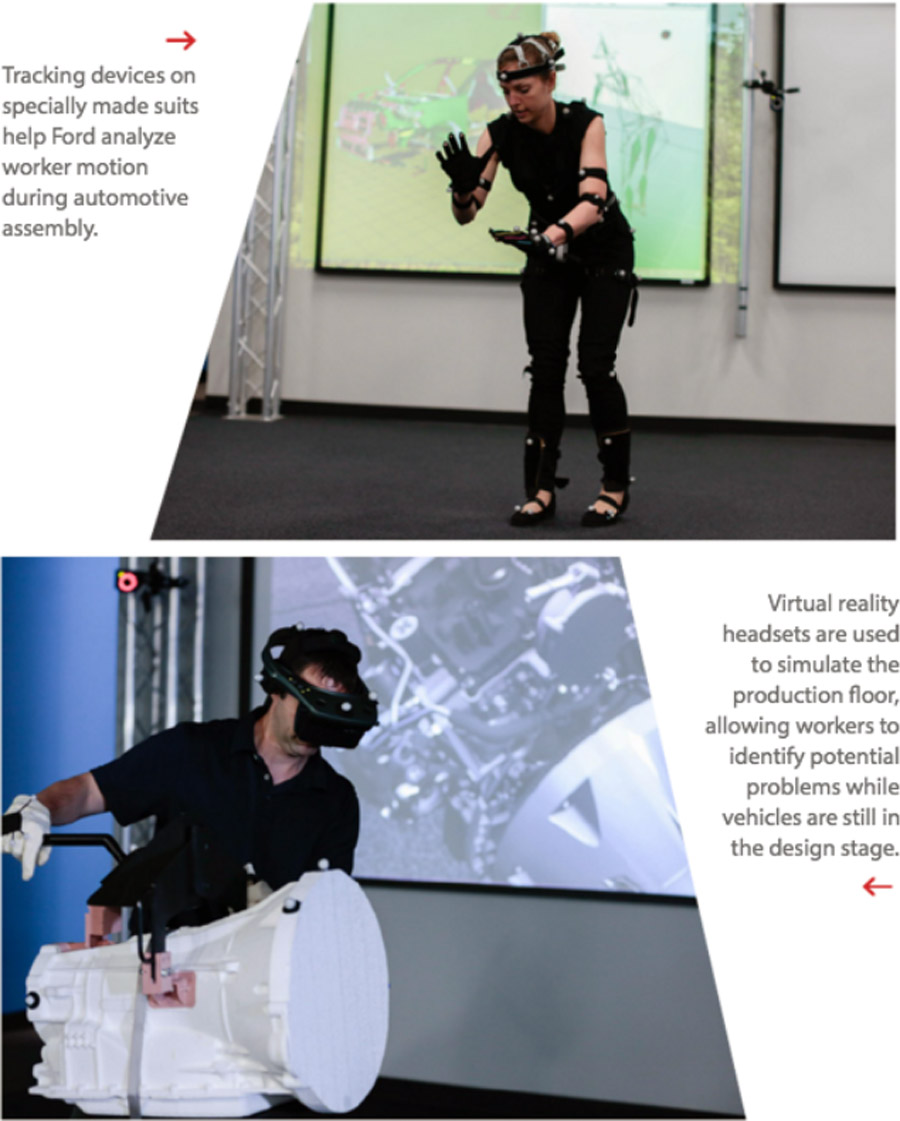 Remember when Mom used to yell at us about our posture. Jack doesn’t scold anyone, but it does provide invaluable information about the mechanics, energy expenditure and mechanical stresses faced by human bodies in industrial settings, including their posture.

Dr. Ulrich Raschke, director of human simulation technologies at Siemens PLM, says tools like these help ensure worker safety while improving overall efficiency. “For instance, if we combine the Jack human simulation capability with assembly process simulation, it allows us to optimize how workers perform in the production environment.”

Jack is part of Siemens’ Technomatix software suite, “a comprehensive portfolio of digital manufacturing solutions.” A simulation begins by selecting the appropriate body size, shape and sex (yes, there is a Jill) for the human that’s being modeled.

In Ford’s case, data collected during the aforementioned motion capture step is used to drive Jack through the various tasks associated with automobile assembly, although a Task Simulation Builder is available from Siemens to program Jack’s movements via a series of simple commands.

While Jack goes about his virtual duties, software algorithms are employed to analyze factors such as lower back fatigue and whether a worker must reach too far for a hand tool. A Task Analysis Toolkit for Jack is also available, which takes care of the heavy computational lifting needed to identify ergonomic thresholds.

Many of these thresholds are determined by the National Institute for Occupational Safety and Health.

“By applying NIOSH safety guidelines to the human model (Jack), we can then ensure we’ll be able to meet those guidelines,” Stephens says. “We don’t have to wait until someone gets injured or complains about a job. We’ll have already designed the work environment to stay within the safety limits, confident that it will meet the established guidelines for many years.” 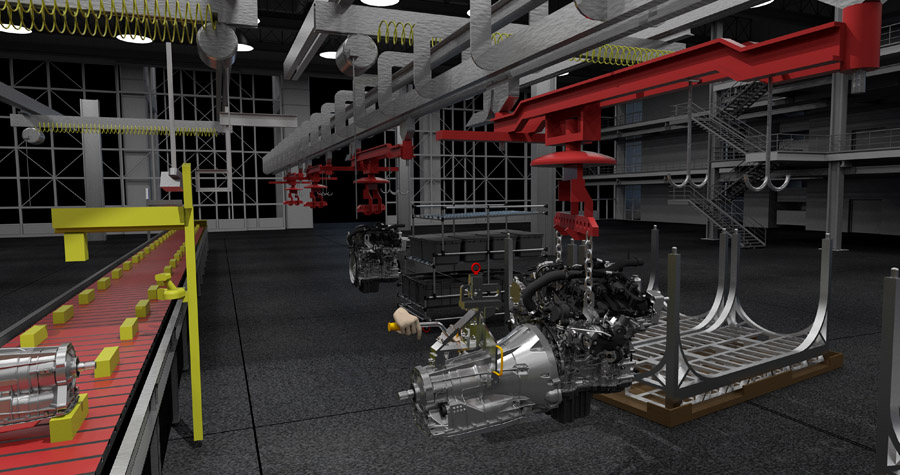 Inside a virtual production line where virtual transmissions are bolted to virtual engines. Views like this help Ford prevent injuries and improve efficiency.

Ford and Siemens have been partners in Jack since its inception. “The original Jack and Jill model was developed at a university we’d been working with,” Stephens says. “Siemens acquired the spin-off company that developed from those efforts, and we kept the relationship going, explaining to them what we were looking for and helping to integrate our research and product development with theirs. It’s been a great partnership, and they’re really in tune with improving the technology.”

Recent Jack developments such as hand and finger tracking have helped Ford to evaluate potential strain injury. Those developments have provided a positive impact on worker fatigue rates.

“It’s very exciting,” she says. “Not only are we preventing injuries, but we’re also seeing substantial improvements in efficiency, output and product design.”

One additional benefit comes from the reduced need for tooling and prototypes, spending time and money only to discover a product is difficult to assemble. With Jack and the other simulation tools Ford has at its disposal, that information can immediately be relayed to the engineering department for improvement. 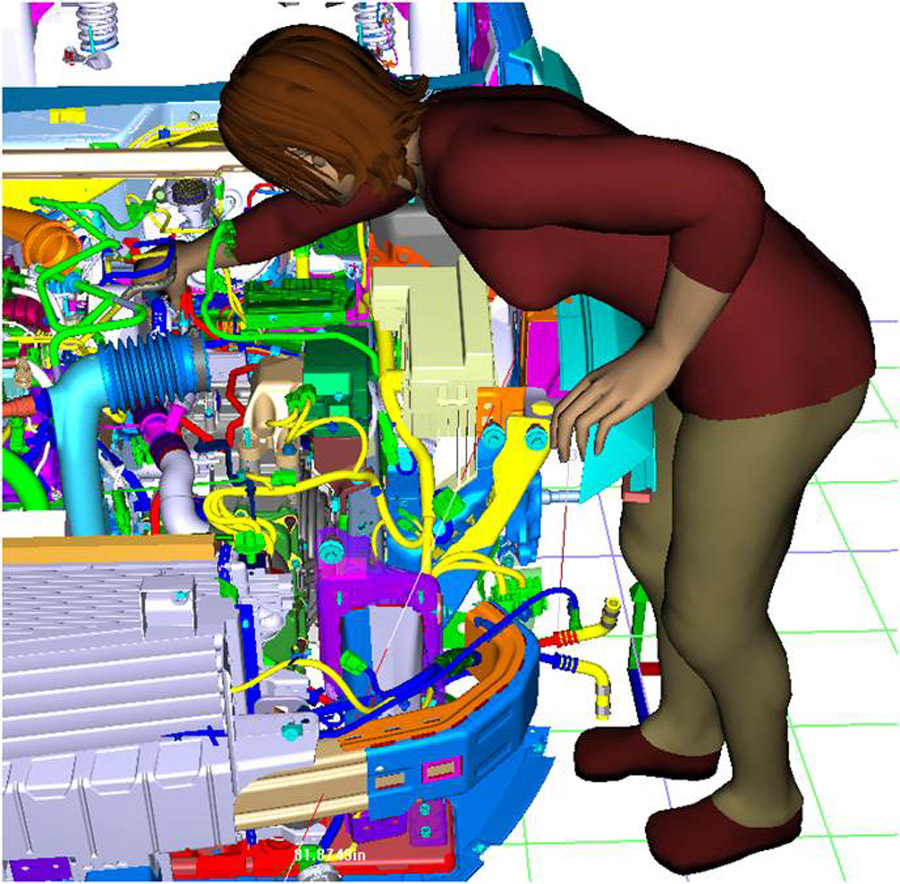 Human model Jill attempts to connect a hose inside an engine compartment. These and similar simulations identify areas for ergonomic improvement.

Stephens also gives credit to the United Autoworkers Union (UAW). “Some of the original drops in our injury numbers came from looking at our production and doing a common-sense analysis right on the plant floor. For example, when I first started here 30 years ago, parts would be put on the plant floor…I mean, right on the floor. Now if you walk through our plants, you’ll find that most of our stock is placed on lift and rotation tables.”

Another example is the weight validation that comes whenever a new part number is released by engineering, an event that triggers an analysis of whether a hoist is needed to lift the part in production or whether to provide an articulating arm during assembly.

“There’s an awareness that designing it right and preventing injuries is the best way to go, instead of waiting for injuries to occur, then going back and saying ‘Oh what happened, and what’s the root cause?’” Stephens explains. “The UAW was instrumental in much of that, helping us to prioritize ergonomics and provide a focus on health and safety in our plants.” 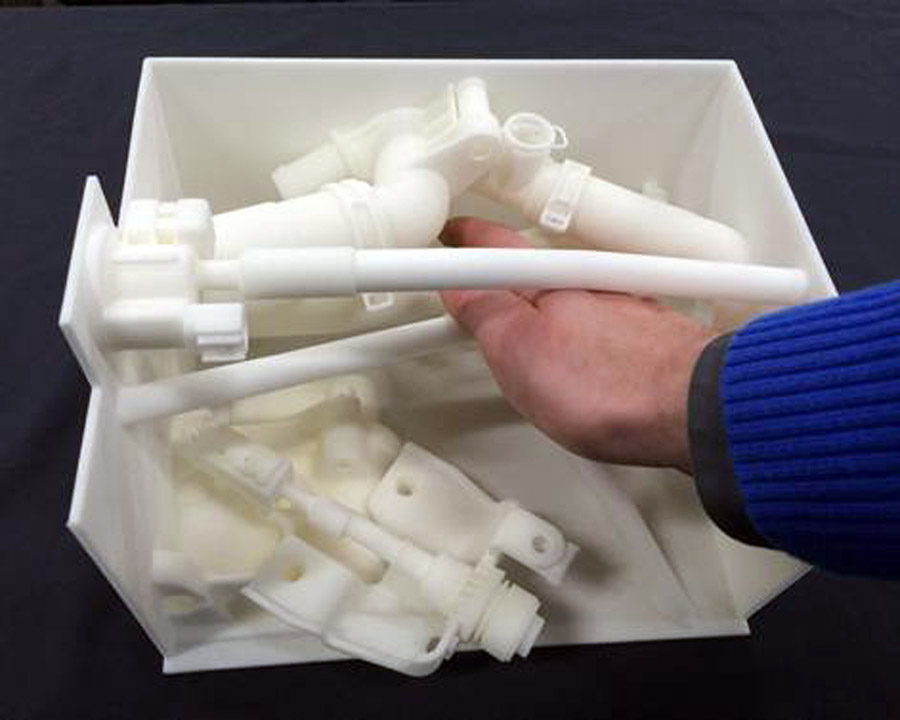 With all the emphasis on robotics and automation, Stephens adds that it’s refreshing to take a more human-centric view on the production floor. “You would never put a part outside the reach envelope of a robot because the robot simply won’t pick it up if it can’t reach it.”

The manufacturing industry is notorious for doing that sort of thing to a human, she says, knowing that the operator will stretch and bend and crawl over obstacles to do their job.

“Now, we just don’t do that,” she says. “We know the working envelope of a human and move the parts so the operator can easily reach them. It’s just good planning.

“We have the tools, and we’re using them,” Stephens concludes. “As a result, we have fewer injuries, but we also have a better place to work, making it a win-win for everyone involved. It’s a very exciting time at Ford, and I’m really proud to be part of the team.”