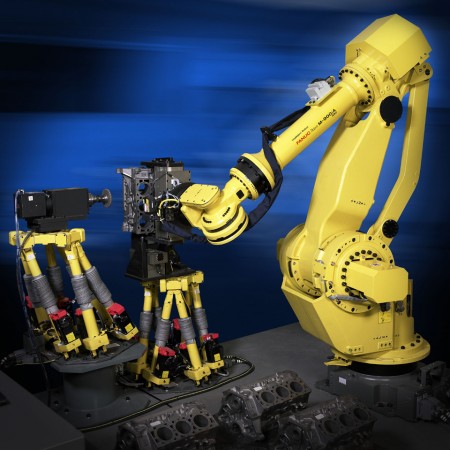 Manufacturing has changed over time, with the most spectacular innovations occurring in recent centuries. Until the mid-1700s, manufactured goods were made individually by hand. But the arrival of the Industrial Revolution brought with it the invention of machinery to produce goods, which dramatically reduced production time and costs.

The machinery was first powered by farm animals and water power, where available. Steam eventually became the power supply of choice until electricity became commercially available. The Industrial Revolution first made its mark on the textile industry before spreading to other facets of manufacturing.

Later, developments in steel manufacturing and a better understanding of tooling helped advance the new industrial era. Steel soon replaced wrought iron because of its physical and cost advantages. Meanwhile, tooling was progressively taking on the form of modern-day jigs and fixtures, which allowed manufacturers to make products more consistently and faster than individually hand-formed parts.

One of the greatest contributors to the Industrial Revolution was, of course, Henry Ford. Ford, with the help of his staff, was able to create and refine an automated assembly line that ultimately reduced the manufacturing time of the Model T from approximately 12 hours down to around 93 minutes. These automation advancements helped Ford achieve his goal of producing an automobile the middle class could afford. Side benefits of Ford’s automation were safer working conditions and pay increases for hourly workers. The ideas and achievements made by Ford are still implemented into various aspects of today’s automation.

Fast forward to the mid-20th century and the creation and implementation of industrial robotics. The progression from the early hydraulic-based motion to today’s AC servomotors is a story all in itself. Suffice it to say, industrial robotics allow manufacturers to perform repetitive activities swiftly and accurately with the added benefit of being able to quickly change-over to new or different product runs.

Robotics have the advantage over hard automation in that hard automation consists of tooling dedicated to a singular process or product line. When that process or product changes, there is a large expense in replacing the dedicated tooling. The immediate benefit of robotics is the reduction of capital spending by being able to easily redeploy the robots on new products or on new and different processes. With the advent of industrial robotics, new concepts in manufacturing were made possible.

The concept of flexible tooling is another advancement in manufacturing. No industry has capitalized on this concept more than the automotive industry. Auto manufacturers have fully applied this approach in factories that produce or assemble multiple models of vehicles down the same production lines. The idea behind flexible tooling was to make the dedicated tooling “flexible” enough to handle that year’s model mix.

The automotive industry has taken multiple approaches toward creating flexible tooling. One approach is to reposition hard locators on the tooling with pneumatics or a servomotor to adjust for different car sizes. Another approach is to utilize a robotic manipulator as a hard locator and have a robot change location to accommodate the various models of vehicles with simple programming.

This idea of flexible tooling offers many benefits. It minimizes the amount of dedicated tooling required to handle large model mixes, such as between a compact vehicle and full-size sedan. By reducing the necessary tooling, the cost of capital expenditures is reduced, as is the amount of floor space required to deploy them. The manufacturing flow can be streamlined because of the reduction of dedicated parallel assembly branches required to process the variants.

The next evolution in manufacturing is the concept of fixtureless tooling. The need for fixtureless tooling is driven by the ever-growing necessity of manufacturers to be flexible enough to handle a variety of mixed products across the same machines, as is the case in batch building. This same need drives manufacturers to minimize the hard automation and tooling capital expenditures to remain price competitive.

Flexible tooling and fixtureless tooling have a lot of the same benefits. Flexible tooling typically means the tooling can be adjusted not only for different sized products but for different products altogether. Fixtureless tooling is usually defined as being able to perform a process like welding, grinding or polishing with one robotic manipulator while the part is repositioned while being held by another manipulator. The secondary “handling” robot may or may not be utilizing flexible tooling. It is usually replacing tooling that is moved into an optimum process position by an electric, hydraulic or pneumatic motor.

This concept of fixtureless tooling was made possible with the advent of multiple-arm control. The ability to manipulate and program multiple robotic arms from a single controller allows greater flexibility in processing and offers some considerable capital cost advantages. Multiple robots can be programmed to work in coordination with one another in a single program, or they can be programmed to do individual and independent tasks. Advancements in software have provided significant improvements to the accuracy, repeatability and capabilities of multiple-arm systems. Multiple robotic arm cells allow for a reduction, and sometimes elimination, of some safety hardware. By providing a safe means for the robots to work closer together and without incident, the physical footprint of a robot cell can be reduced. This helps manufacturers efficiently manage the use of costly floor space.

Fixtureless tooling is increasingly replacing hard automation due to a multitude of benefits. The biggest and immediate benefit is in the tooling cost and design. Fixtureless tooling is generally reduced to a robotic end-of-arm tool equipped with suction cups or a gripper module. This makes it much less complex than dedicated tooling and more cost-effective to design, build, maintain and replace.

Add in the arms

Quality can be improved when combining fixtureless tooling with multiple robotic arms. The robot holding the workpiece can be programmed to optimize part placement for the processing. For example, in an arc welding cell, one robot can hold a weldment and a second robot can be used to weld the part. The two robots work together to optimize the torch angle while welding on multiple surfaces and in one continuous motion. This is an advantage over dedicated tooling in that most dedicated tooling only allows access to a couple of surfaces due to the rigid frame surrounding the part required to hold it steady while being processed.

Automotive exhaust manufacturers have creatively applied fixtureless tooling by having two robots hold an exhaust system while one or more additional robots perform welding on the tubes and brackets that make up the assembly.

An automotive frame supplier has capitalized on the multiple-arm fixtureless tooling concept by using material handling robots to grip multiple brackets from various conveyor systems. Using machine vision, the robots then accurately locate a vehicle frame. Next, they accurately place and hold the brackets against the frame while other robots weld it in place.

In summary, when fixtureless tooling is deployed, along with multiple robotic manipulators, manufacturers are in a position to be competitive in the global marketplace. The amount of hardware required is minimized, which reduces the capital costs and directly impacts the bottom line. The reduction in hardware can provide a reduction in the energy consumption to manufacture a product, which makes an environmentally friendlier product and a reduced carbon footprint. The physical footprint on their shop floor is reduced, allowing for future expansion without having to add brick and mortar. Changeover between product batches is minimized.

Furthermore, because programs are being combined on multiple robotic arm systems, time to program new products is minimized, as well as the energy to maintain those programs. Quality and part consistency is improved because parts can be manipulated for optimum process application. When combined with machine vision, the tasks normally reserved for the operator can be eliminated by having the robot identify the parts and select the proper program(s) to run. Machine vision can also be used to perform both pre- and post-inspections to reduce or eliminate scrap and record the results for traceability.