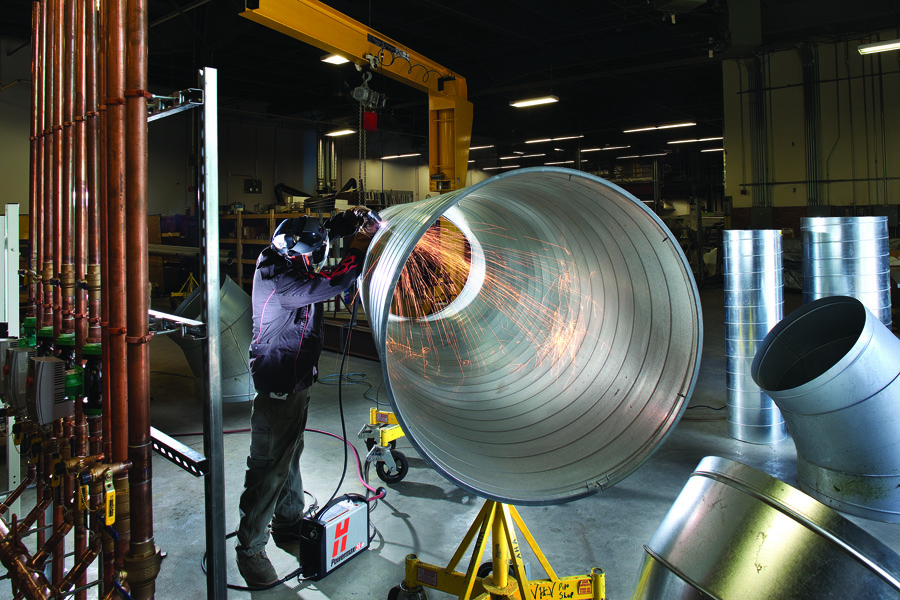 It is often said, “necessity is the mother of invention.” Old school “tin knockers” know this better than anyone. As recently as 40 years ago, these skilled tradesmen were laying out each galvanized component of ductwork using templates made of metal, plywood or cardboard. Then, they’d take a template and sketch out the location of parts on the raw steel, before taking up hand and electric snips to cut out parts. They needed a better way.

As one can imagine, the arrival of CNC controlled air plasma cutting systems in the late ’70s and early ’80s was a welcome game-changer for larger, more progressive companies that understood the return on investment, although at the time, circa 1980, it required a $30,000 commitment. Capital costs remained prohibitive for smaller companies.

The new systems could usually yield more parts in a day than a team of tin knockers could in a week. And, as an added value, the pieces were more precisely cut. And, while the early systems had a learning curve and were inherently unreliable, the ability to design, cut and label the stainless and raw galvanized steel used for commercial and residential ductwork systems using CNC plasma cutting was a significant convenience.

Fast-forward to today and a large majority of HVAC shops now use CNC duct cutting machines. Unlike earlier systems, these machines are highly dependable, more capable than ever before, and, when adjusted for inflation, less expensive than the original systems.

The CAD/CAM software powering these systems is better than ever, too. It’s easy to learn and use and allows comprehensive shops to easily go from design to forming and fabrication.

Most HVAC fabricators focus on speed because faster cut speeds provide the ability to produce more product in less time. And many utilize air plasma cutting systems such as Hypertherm’s Powermax45 XP and Powermax65 models. Both systems can be integrated into a CNC table, offering the same functionality as a dedicated duct cutting machine. In fact, the Powermax45 XP’s FastConnect torch connection makes the integration incredibly easy.

Some of the Hypertherm Powermax systems also include add-on tools, such as a high-speed rotary spindle to accurately cut duct liner and insulation materials in addition to sheet metal. While the cut quality is good, speed is generally the focus.

If field use is the focus, there are lighter and smaller options, including systems with built-in air compressors that can run on a standard 20-amp, 120-V power outlet or even on a generator. They serve as a quick way to cut galvanized steel in the field using a handheld torch placed right on the metal cut surface.

These systems allow technicians to drag the torch along a template or the side of a straight edge for very accurate cutting of extra duct or branch holes that are so often necessary. In some rare instances, companies also take on heavier metal fabricating jobs using high-definition or X-Definition class plasma, like the type found in the XPR300.

The torch design and consumables of today are also much improved. In earlier systems, the nozzle and electrode would last through three to six sheets of galvanized steel or 100 or so duct fittings before needing replacement. Fortunately, consumables on modern systems last 10 times as long.

Clearly, there’s a growing list of CNC duct cutting machine benefits in today’s market that include ease of use, additional capabilities and higher productivity levels. But, it’s important to acknowledge plasma cutting technology has also advanced over the years.

Old school “tin knockers” can now take advantage of opportunities to upgrade just the plasma system on an existing CNC machine or to add plasma technology for the field installation crews to improve their versatility and productivity. After all, necessity is the mother of invention.