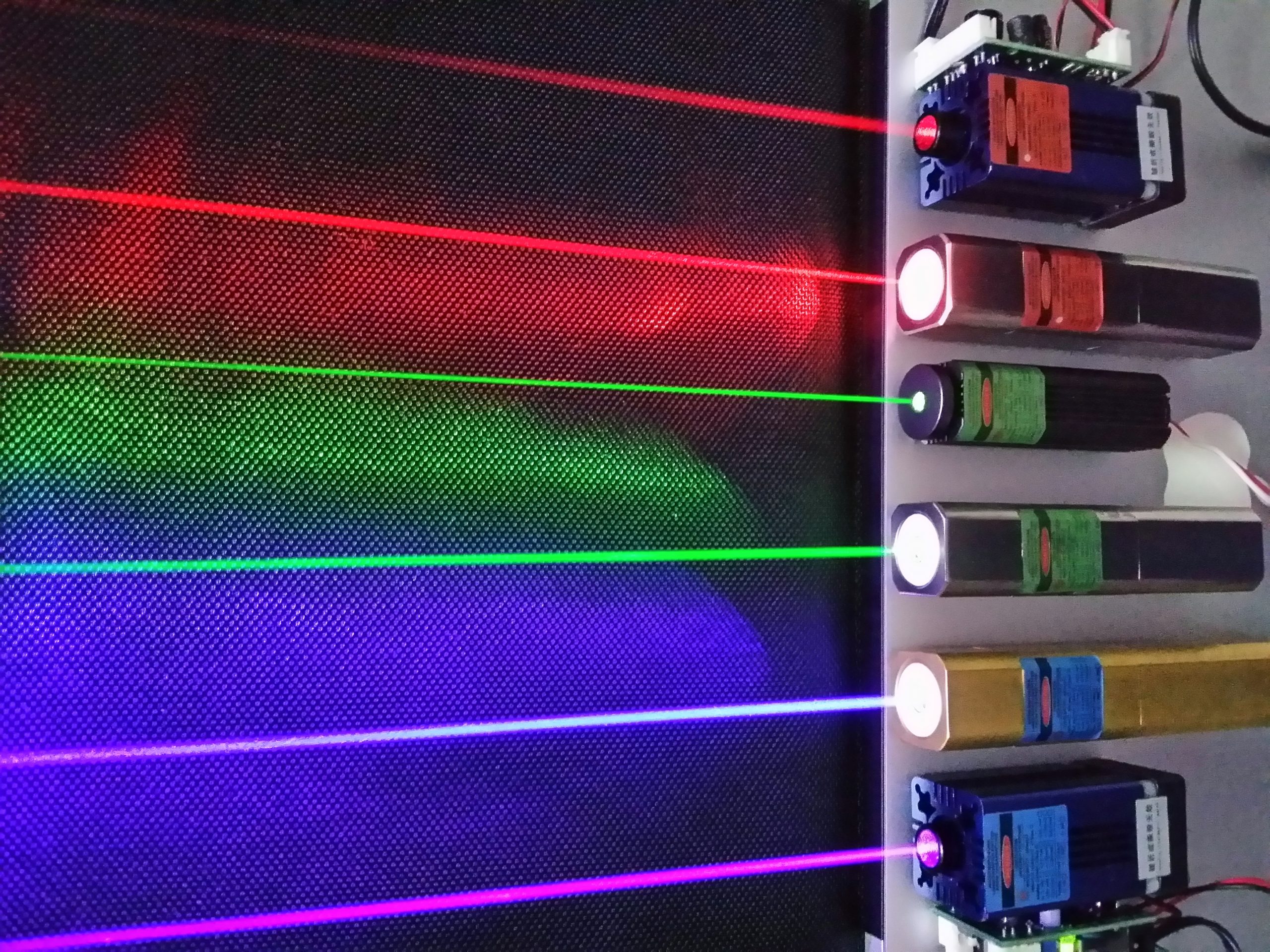 Lasers are impossible to avoid, and it’s not just because nobody can run the 300 million meters per second it would take to outrun a light beam. Lasers are everywhere. They blow up planets in Star Wars movies, they provide valuable exercise and entertainment for cats, and they scan groceries at the supermarket.

Many people know that the word “laser” is an acronym, and some even know what it stands for: light amplification by stimulated emission of radiation. Very few people know the meaning behind that acronym, though, and that’s a shame, because as ubiquitous as they are, lasers and the physics behind them are truly amazing. 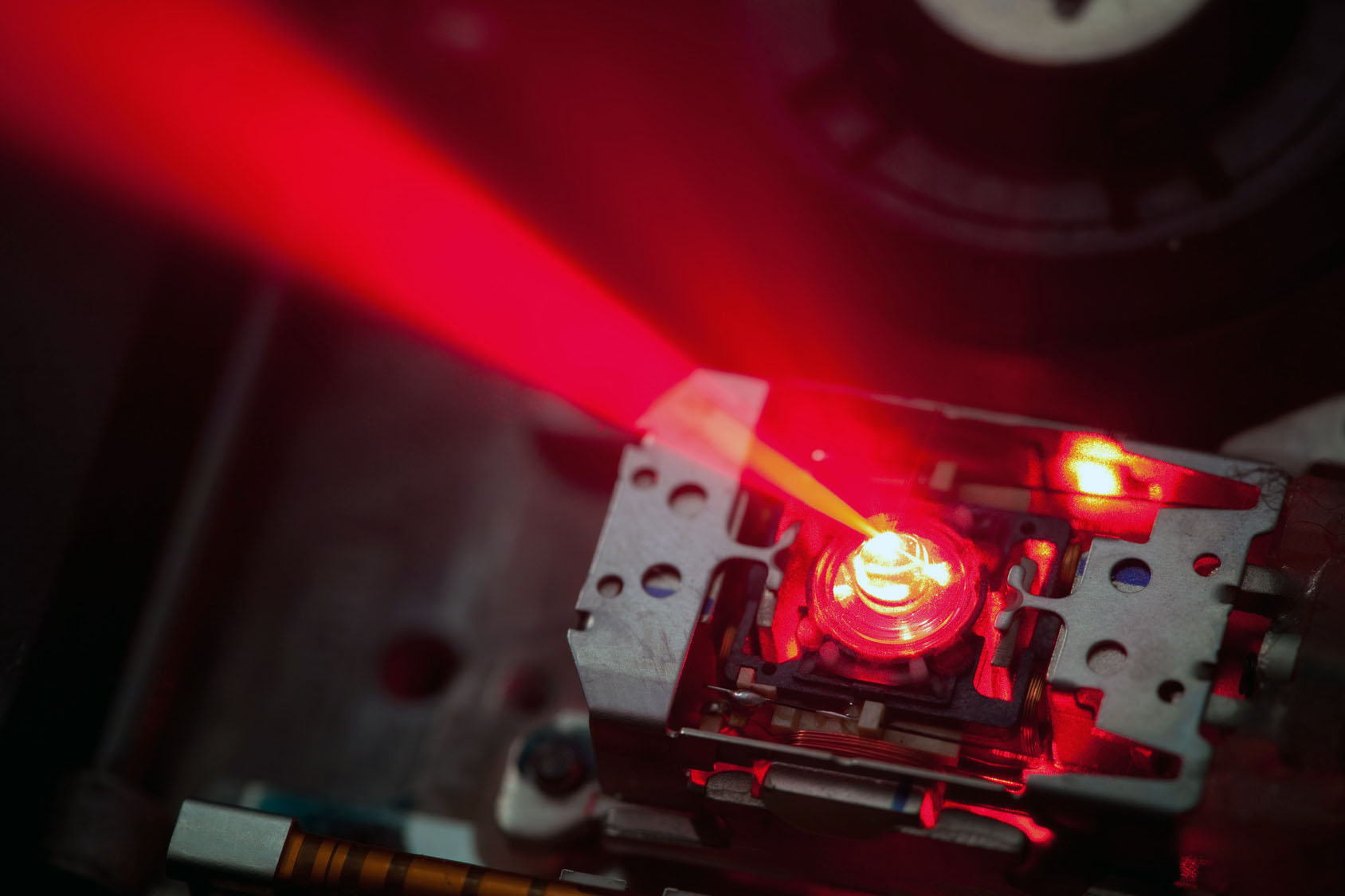 The inner workings of a DVD player reveal the red-light laser inside, which can read the data necessary to watch a movie from the comfort of home.

Each word behind laser packs a punch, even the first and, apparently, most mundane: light. Light is, of course, electromagnetic radiation we humans can see. It’s no different from microwaves, X-rays and gamma rays; it is simply defined by a specific range of wavelengths between 380 and 760 nm.

But why can we see it? Because the sun generates abundant electromagnetic radiation in this range and, by and large, Earth’s atmosphere does not absorb it, so it’s everywhere around us. The human eye evolved in response to this useful abundance.

On the other hand, our eyes certainly aren’t equipped to cope with light from any but the tiniest of lasers because the light from a laser is amplified – and not just in the sense that there’s a lot of it. Laser beams are highly coherent.

Coherent light doesn’t scatter and interfere with itself like the light from, say, a flashlight, because coherent light is in phase, meaning that there is a fixed relationship between the peaks and valleys of the waves (photons) that make it up. As a result, laser light remains tightly packed, even over long distances. 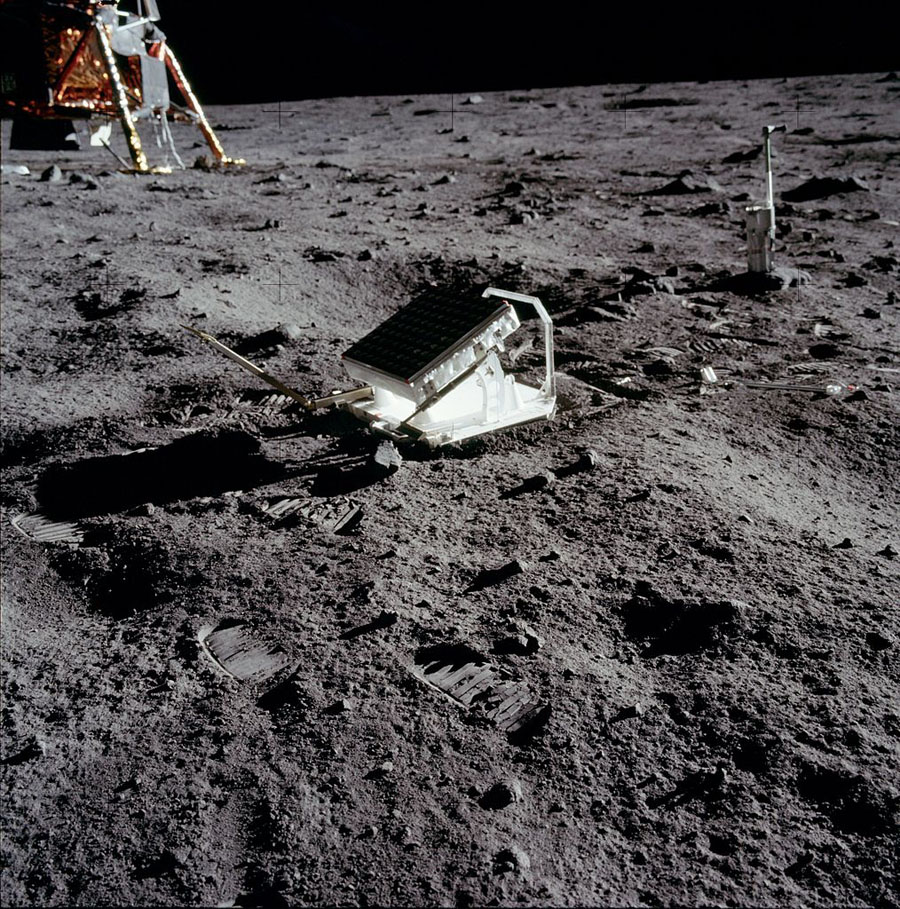 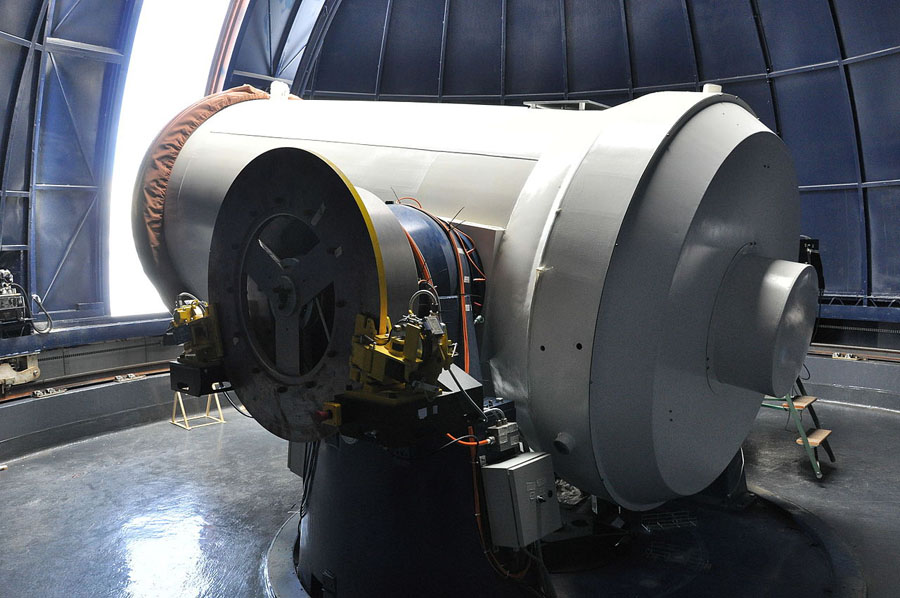 NASA’s Lunar Laser Ranging Experiment measures the distance between the Earth and the moon by pointing a laser on Earth at a mirror placed on the moon by Apollo astronauts. Various telescopes have this capability, including the one found at the Côte d’Azur Observatory in Grasse, France.

These qualities bring us to the fundamental principle that makes lasers possible: stimulated emission of radiation. Stimulated emission occurs when an atom in an excited state is caused to decay to a lower state due to interaction with an incoming photon, the energy of which equals the energy that was required to excite the atom in the first place.

Stimulated emission yields a new photon of the same phase and direction of the original photon, which is not absorbed. Where first there was one photon, now there are two (coherent) photons. Repeating this process results in an ever-increasing number of photons in phase and traveling in the same direction.

Atoms are naturally inclined to stability, so an atom in an energetic state tends to decay to a less energetic – and more stable – ground state. In so doing, the atom emits a photon in a process called spontaneous emission. Furthermore, the energy of the photon emitted corresponds exactly to the difference in energy between the two states, which determines the wavelength (and therefore the color, if it is within the visible spectrum) of the light emitted.

Therefore, if the emitted photon is absorbed by a nearby atom of the same type, that atom is excited to the aforementioned energetic state, absorbing the photon. Where first there was one photon, now there are none.

Building a laser calls for creating conditions in which stimulated emission predominates. Most atoms at room temperature are in their ground state. When photons are introduced, ground-state atoms absorb photons and attain an energetic state.

A set of atoms in which most are in an energetic state rather than the ground state is said to have achieved population inversion. Now, when photons are introduced, few absorptions occur, and stimulated emission predominates. 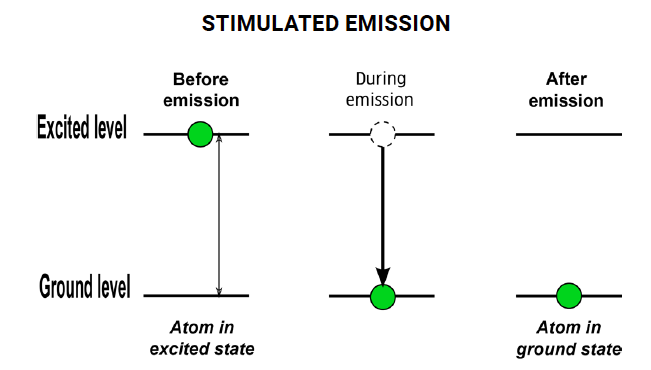 Stimulated emission occurs when an atom in an excited state is caused to decay to a lower state due to interaction with an incoming photon, the energy of which equals the energy that was required to excite the atom in the first place. 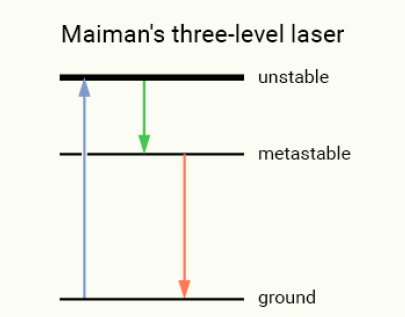 This three-level diagram depicts population inversion – where most atoms are in an energetic state rather than a ground state.

In May 1960, Theodore H. Maiman, using synthetic ruby crystal, built the first laser. Maiman’s pioneering work took place in Malibu, Calif., in the Atomic Physics Department of Hughes Research Laboratories, formerly Hughes Aircraft Co. Maiman achieved population inversion in his laser by exciting the atoms in his crystal to an unstable energy level from which the atoms quickly decayed via spontaneous emission (or other means) to a lower, “metastable” energy level.

Energized yet stable (spontaneous emission was relatively unlikely in the metastable level), the atoms were primed for stimulated emission and the cascade of in-phase photons it entails: a laser. To build up the energy of the beam, Maiman placed his crystal in a small tube with a fully reflecting mirror on one end and a partially reflecting mirror on the other.

The photons in Maiman’s tube bounced back and forth between the mirrors, causing more and more stimulated emissions. Those that escaped through the partial mirror formed the laser beam.

In the half century that has followed, scientists and engineers have relied on population inversion and stimulated emission to construct lasers using crystals, as Maiman did, as well as gases, liquids, semiconductors and even beams of high-energy electrons.

Despite Maiman’s initial breakthrough being met with fanfare, lasers were initially regarded as “a solution in search of a problem.” The search, however, has been extremely fruitful – the world we live in would hardly be recognizable without lasers.

Just two years after Maiman’s breakthrough, two teams, one at General Electric and the other at IBM, announced separately that each had created the first semiconductor laser – also known as a laser diode. The achievements at GE and IBM were essentially the forerunners to the lasers that operate every day in nearly every home and business in America and around the world. And they were very compact.

Early versions could fit on the head of a pin, and today they can be microscopically small. Laser diodes are also durable and inexpensive, today forming the basis for CD, DVD and Blu-ray technology.

Red-light lasers read CDs and DVDs and, with just a little extra power, write on them. Blue lasers, with their higher energy and shorter wavelengths, can read finer, more tightly packed information, making it possible to store even more data on a disc the same size as a CD or DVD – hence the popularity of Blu-ray technology.

Laser printers – yet another example of lasers in everyday life – project laser light onto photoconductors that attract ink onto the laser’s path and then the paper, creating a sharp image. Surveyors also use laser pointers to measure angles. Distances, too, can be accurately measured with the help of lasers.

Distance is measured by reflecting a laser pulse off of a mirror and measuring the time it takes to return. NASA’s Apollo astronauts placed a mirror on the moon for just that purpose, enabling NASA to measure the moon’s distance from Earth with an accuracy of mere inches over an astounding 239,000 miles.

Meanwhile, the manufacturing industry has reliably employed practical high-power lasers for decades. Not only are they leveraged to create precise cuts, they are also adept at producing clean, efficient welds.

Regardless of what they’re used for, all lasers rely on the same simple yet mysterious properties. So the next time we’re in line at the supermarket, instead of second-guessing the price of the groceries on the scanner, we can instead wonder for a moment at the streams of coherent photons that make it work.