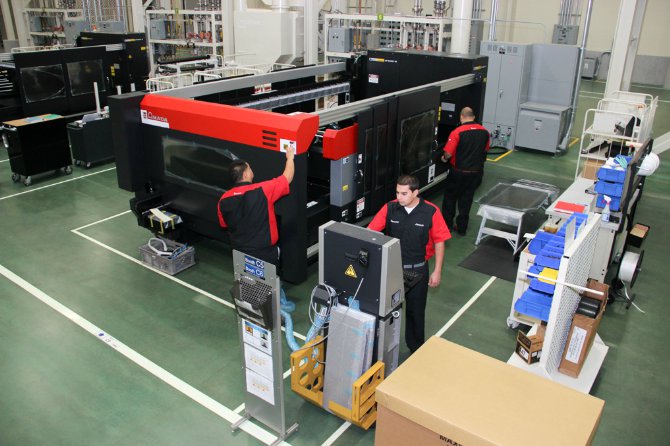 How a multi-national operates in a host country tells you a lot about how to work with them. Here’s an extreme example of adopted citizenship.

When you have four decades of experience in a field, you get to see history unfold before your eyes. Your editor has seen it in the U.S. machine tool industry. Foreign-owned machine tool companies were just moving in during the ‘70s. Our initial reaction was curiosity; then alarm; and then resignation as U.S. builders either were bought out or folded. What was to become of us?

But we were focused on the wrong questions. If we had looked with open eyes, we would have seen enormous potential benefits, from the new competition, new ideas, and, especially in machine tools, new ways of doing business that benefitted consumers of industrial equipment. The U.S. machine tool industry in 1975 had become as stodgy and unresponsive as a horse-drawn buggy. They needed a kick in the pants, and they got one.

Fast-forward to today. Globalization is the new reality, and many companies, including machine-tool builders, are multi-national. We’re high-tech and the builders are fiercely competitive.

And so now we have some new questions: Who’s on my side, and who’s not? Which ones are carpetbaggers, and which are enthusiastic, naturalized U.S. citizens? How focused are they on servicing my needs, from building the right machines for my work, through service and training?

In other words, it’s not “where did they come from,” but “where are they now?” And the answer is, it depends. Some keep their distance, but a few of them have planted their roots deep in the U.S. of A. They’re hiring here, training here, designing here, purchasing here, and building here. They’re involved in the health and future of U.S. manufacturing. If you want your machine builders to be partners with you and to support your goals, rather than just to sell you machines, some of them are as good as any suppliers we’ve ever had to deal with. We get to see a lot of builders and to talk with their customers every week.

Amada as an extreme example

We’re here to report, not to judge, but we’ve singled out Amada America because they’re an extreme example that illustrates the “citizenship” end of the multi-national spectrum. They’ve dug deeply into American soil, and it has large consequences for U.S. fabricators.

Amada has invested over $155 million in plant and infrastructure over the past six years. One sign that demonstrates their sense of belonging is that their big facilities in southern California and in the Chicago suburbs are not rectangular boxes that say, “let’s get this over with and start selling.” They’re stunning pieces of architecture that say “this is our home, too, and we care what it looks like.” No doubt they spent a lot of money to elevate their physical presence above the ordinary, and that, too, says something: “We’re here for the long haul.”

When kids tour Amada, they see this: modern manufacturing of high-tech machinery, in a clean, well-lit environment. And it’s not a showplace. This is the real plant, and it changes some young minds about having a career in manufacturing.

The company had a plan for their investments in plant and people, and it was based on these key facts they saw in U.S. industry:

Talking with Nick Ostrowski, Amada’s Marketing Manager, we struggled for a word to describe the company’s big idea. “Holistic,” he said. The word is overused but it is appropriate in this case. They strive to put their arms around the whole collection of issues surrounding U.S. manufacturing today: employment, foreign competition, social attitudes toward manufacturing, and special needs of the U.S. market.

They’re involved in the effort to get young people into the field. On one day this past April, they had 200 local high school students tour their Schaumburg, Illinois Solution Center. The kids got to see high-tech machinery in a comfortable environment that undercuts the impression of manufacturing they get from the media and, sometimes, their schools. “When they see that the jobs really are software-related, and they understand that the jobs really are high-tech, then we’re doing our part to get the next generation involved,” says Ostrowski.

Efficiently organized, borrowing heavily from Amada’s highly developed plants in Japan, the Brea plant is part of a $155 million investment the company has made recently for meeting U.S. market demands.

It’s not just kids. Amada has made a commitment to a very special, very determined organization in San Diego – Workshop for Warriors – that trains vets in metalworking, including both chip-making and fabricating. When Amada started building their lasers in the U.S., the first one was donated to Workshop for Warriors.

“Most of these guys were Marine infantry,” says Ostrowski, a Marine vet himself. “They’re trained in mayhem. The Workshop trains them for good jobs in industry. It’s tough, it’s selective, and it produces certified metalworkers who are ready to enter the field. What better way for Amada to get involved in American manufacturing’s future?”

Ford said that a century ago, and then proceeded to build plants in Europe, South America, and elsewhere to put his idea into practice. Multi-national builders have caught on over the past few decades, and Amada has absorbed the message in a big way.

Lasers are their best-selling product (as they are throughout fabricating), and so they build them here. Automation is the other big trend, so they build automation products for the U.S. market right here, too. Soon, says Ostrowski, they’ll also be building more of their core fabricating machines in the U.S.

Building in the country you sell to is not unusual, but designing them for the local market is less common. Amada has a large engineering staff in California, including 25 engineers. A laser may cut the same way in Japan or Germany as in the U.S., but automation, particularly, varies substantially from one country to another, due to differences in stock material dimensions, market sizes, the need for quick-change flexibility, and so on.

Ostrowski says that the company’s engineers poke around a lot at customers’ facilities, so it’s only fair that they invite customers in to poke around at Amada. They have 200 – 300 per month visiting the facilities. “The more progressive contract manufacturers and job shops tend to work very closely with our engineers,” he says. “They need access to engineering and we’re providing it.”

Workshop for Warriors, which trains military vets for metalworking jobs, is a very special operation that Amada supports with a donated laser and other involvement. The idea is to help U.S. manufacturers acquire well-trained workers.

Nick Ostrowski is one of the many Americans at Amada, who, as one would expect, emphasizes the Americanization of Amada’s U.S. operations. But your editor had an opportunity at the last International Machine Tool Show to interview Mitsuo Okamoto, the corporation’s CEO in Japan. The U.S. market for Amada is just a fraction of its worldwide market – the corporation probably is the largest machine tool builder in the world – but Okamoto-san is as determined as Ostrowski that Amada be a real U.S. citizen in its operations here. Including the nine-figure investments, hiring 85 people in California just for the manufacturing operation there, a substantial engineering staff and multiple efforts to train and encourage vets and young people to get involved in U.S. manufacturing, they cover the bases. We didn’t ask them if they sponsor a Little League team but their focus is on supporting industry, in any case.

Normally FAB Shop sticks to the machines and their technology, rather than the companies that produce them. But, as we said, Amada is an example of how multi-nationals can settle in and become part of our manufacturing environment. When you’re buying expensive machine tools, it’s important to know.