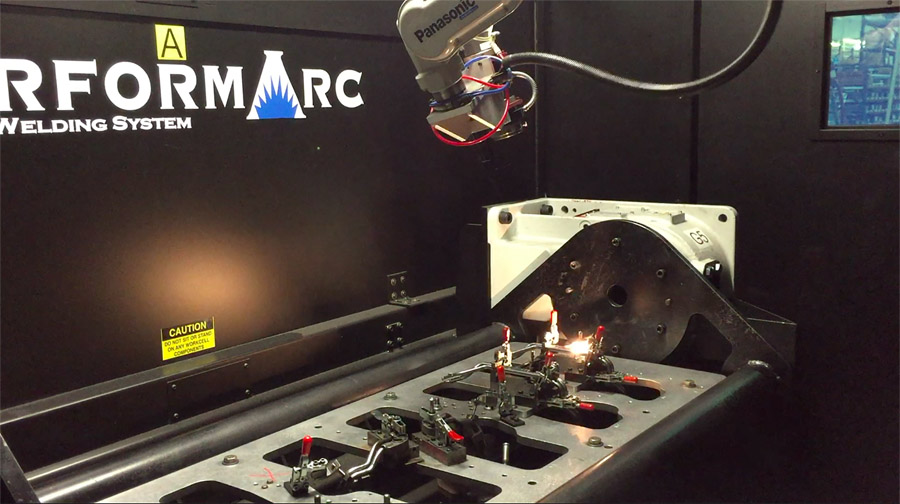 As most responsible manufacturers are prone to do, Miller Electric Mfg. LLC conducts regular audits regarding the quality of its products and the methods in which they are manufactured. Recently, the company conducted an audit of the production of the outer wrappers of its Millermatic welding machines and other wire feeding equipment.

The goal of the audit was to identify areas for quality and productivity improvement. It was also aimed to address issues surrounding the labor-heavy process of manually welding the wrappers.

As is typical in this type of scenario, Miller vetted a variety of options, including a range of joining technologies. Ultimately, the company chose an automated laser welding process to replace the previously used manual resistance spot welding (RSW) process. 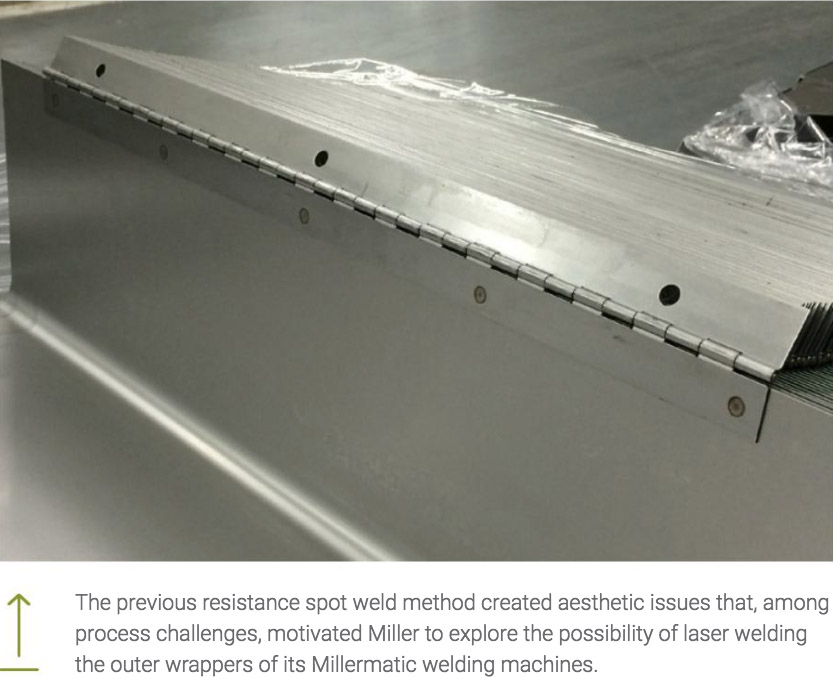 The original RSW process was replaced for a variety of reasons. Adam Utecht, engineering manager, components division, at Miller, explains that while production goals were definitely a driving force for moving away from RSW, additional concerns came from a design engineering standpoint as well as an ergonomic standpoint.

“From a design standpoint, we wanted to eliminate some of the cosmetic issues that were created by RSW,” Utecht explains. “While producing a variety of welds on the hinge of our machine wrappers, the RSW process left indentations in the metal that were noticeable on the top surface of the machine even after being powder coated.”

From an ergonomic standpoint, Utecht says that historically, RSW is a very manual application. For the Miller application, the actual welding process was labor intensive, but so was the setup. In an era where competition for quality employees is fierce, creating the best possible work environment is critical in terms of hiring and retaining staff.

“Previously, operators would load the parts into a jig, manually clamp them and then hold a fixture on a table at arm’s length and slide it through the RSW machine,” he explains. “The fixture didn’t weigh a lot, but reaching across a table like that all day long results in fatigue. We also took into account what we call cumulative strength moves, which are the number of movements that a person needs to take to complete a task, such as a push, a pull or a lift. From a safety and ergonomics standpoint, we wanted to tackle that. In the end, the new automated process removed 5.5 million cumulative strength moves a year over the 110,000 parts that are produced.”

In regard to meeting higher production goals, the new automated laser welding process hit the mark and then some. In addition to reducing actual operator intervention time by 50 percent, the number of part numbers involved in the project increased from 10 to 13. And, annual cycle time – even while increasing production numbers – decreased by 1,500 hours. 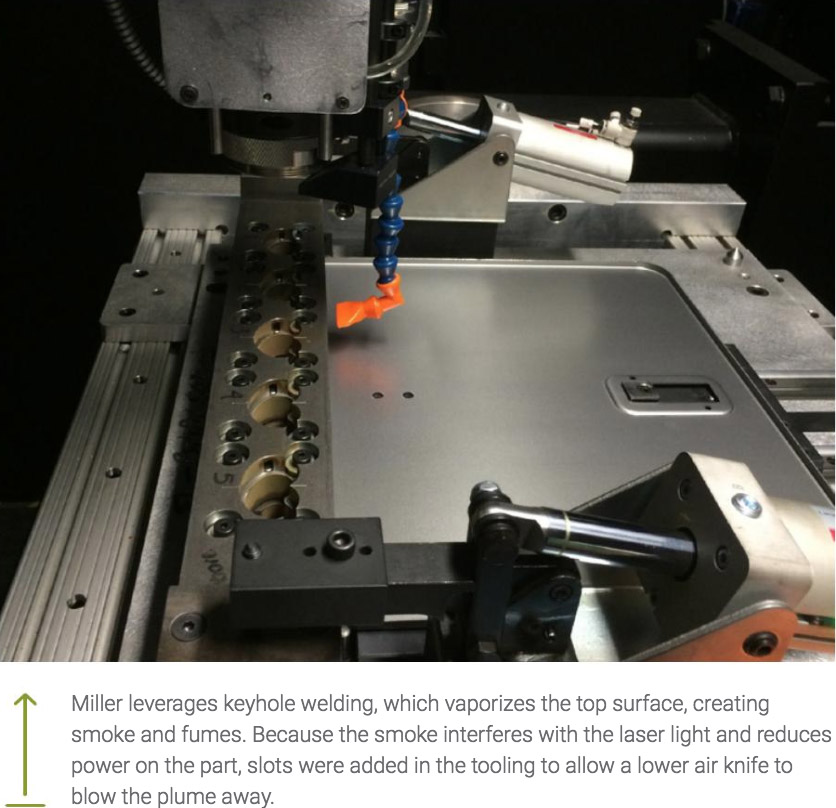 To understand the benefits that were realized by moving away from the RSW process, it’s important to understand the pitfalls of the original process. With RSW, both top and bottom access to the wrapper was required to produce the weld.

And although top and bottom access was available, the pressure from the clamping electrode created the indentations that affected the cosmetic quality of the final part. Furthermore, the inherent nature of RSW also created challenges for automation primarily because RSW guns are so heavy, requiring a heavy payload robot.

“The welds attach the piano hinge to the outer wrapper and are located in a visible area on the top of the machine,” explains Erik Miller, solutions specialist, laser group, at Miller. “If you talk to the people in marketing about brand loyalty to Miller, you’ll hear stories about people who wax their welders because of their pride of ownership. We feel a responsibility to deliver on these expectations and identified an opportunity to improve the cosmetic appearance and weld strength, while also improving productivity.”

Fortunately, with the laser welding process, the indentations became a thing of the past. Two-sided access was also relegated to the history books.

“We can create quality welds through a single-sided access point; we’re able to accomplish that thanks to the properties of laser, which creates a high-energy density spot that when the light hits the surface, it vaporizes the material and pierces through,” Miller says. “With this method, we can control the depth of penetration so that it can pierce through the piano hinge and half of the material’s 16-gauge outer wrapper thickness.”

“The project turned out to be a great opportunity to partner with the Miller laser welding team,” Utecht says. “In all aspects, the results were exactly what we were hoping for. Previously, two RSW machines were required with one running occasionally as required and the other running two solid shifts. Today, with the laser welder, we can run everything in one shift, achieving close to a 50 percent reduction in overall cycle time.” 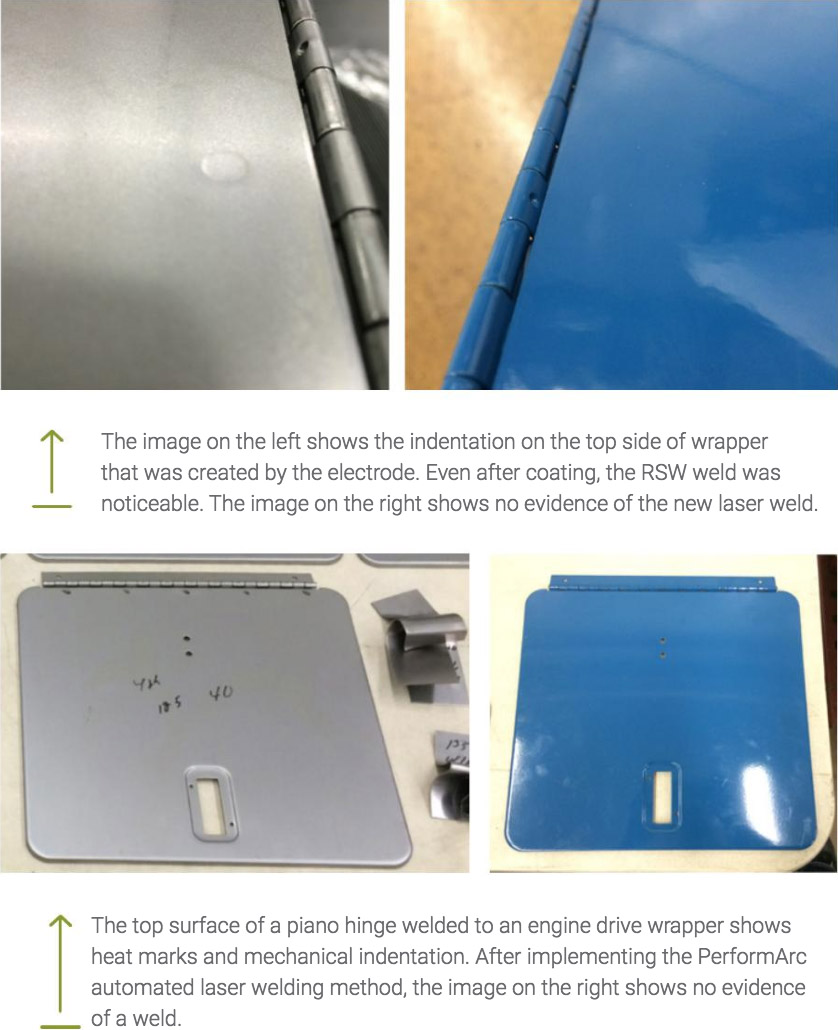 The Miller laser welding system in question is the company’s turnkey PerformArc cell, which is pre-engineered and easy to install for a variety of applications. Pre-engineered cells provide an opportunity to iterate a standard design that results in a robust, cost-effective and well-executed product.

“The design is iterated and fully vetted – as opposed to a one-time engineered system where there are often a few bugs and quirks that need to be worked out,” Utecht explains. “With the pre-engineered PerformArc cell, those bugs and quirks have been worked out, meaning there aren’t additional engineering costs every time it’s sold.” 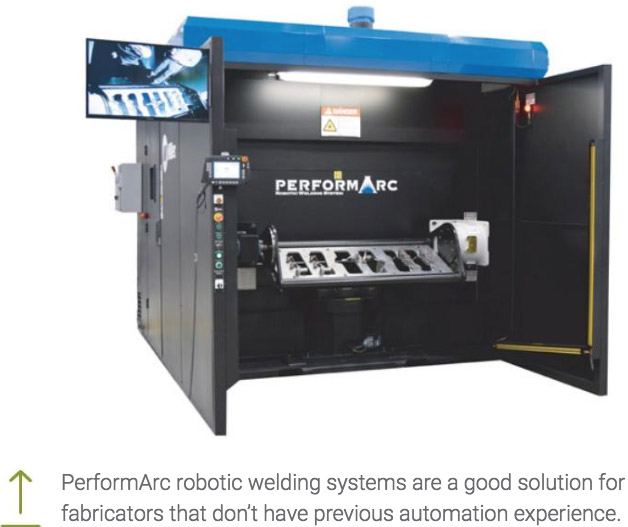 Another benefit of the system is its fixed optic feature, which produces welds similar to those created with RSW with a remote scanning head. Often times, the weight of the scanning head is prohibitive based on the heavier payload robots that would be required for automation.