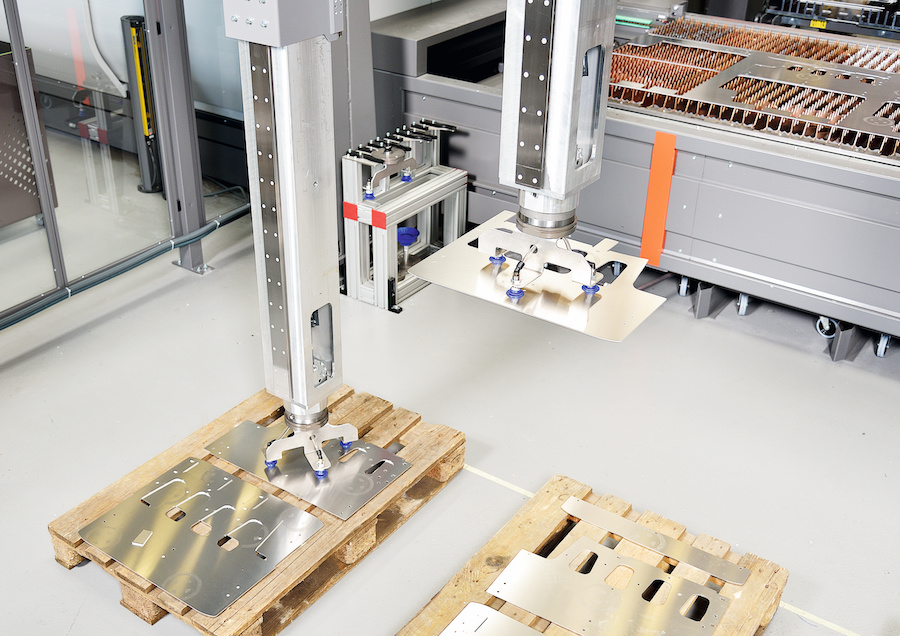 Initially, the following scenario sounds like a dream come true: You’re looking to grow or modernize your fabrication business by adding or replacing a laser cutting

machine, and every option available is a fiber-powered machine that will make quick work of what you have on your current production schedule. Not only does the upgrade from a CO2 laser to a fiber laser (or even a fiber to a higher power fiber) give you a machine that fits in roughly the same floor space, but it also consumes less energy and is likely five times more productive on average.

That dream come true, however, can start to get scary, fast. The math stops revolving around the inch per minute (ipm) feed rate of a laser cutting head and starts to reckon with a new metric: tons per hour across the cutting table.

It is well within the capabilities of modern laser equipment to cut 1/4-in. steel faster than 500 ipm. The nest runtime in a 500-lb. sheet of steel that took 30 min. or longer on the 10-year-old machine is reduced to 6 min. This equipment is now capable of processing 2.5 tons of steel per hour, or a full truckload of steel in one 8-hour shift. This requires a human (or team of humans) to handle 83 lbs./min., every minute, to keep the laser on. It’s difficult to see this task continuing on as strictly manual labor, especially with the missed opportunity of saving money by using that labor elsewhere in the shop.

This may conjure up images of a hectic, fast-paced laser work-in-progress (WIP) area full of parts and carts and hammers and forklifts driving full speed everywhere. This is a reality created if the shop focuses only on ipm without any automation considerations. Automation exists to increase productivity and efficiency, and when used properly in the fabrication environment, it makes life calm, controlled, predictable and profitable.

At the speeds of current high-powered fiber lasers, automation is a mandatory part of the equation for maximum return on investment. This adds another layer of decisions in what can already be a complex equipment evaluation and selection process. But, in discussions with prospects and customers, one thing is clear: The end goal for shops of all sizes is turning lasers into smart, automated fulfillment centers for parts, removing labor from the process and repurposing that resource elsewhere.

In the next five to 10 years, North American fabricators are poised to adopt larger and smarter storage and retrieval solutions for sheet metal, but not just for raw material storage. With the adoption of the 10-plus kW fiber laser, the traditional 10-shelf tower no longer holds all the jobs that might be needed in a given day or even a single shift. A small tower storage system like this does help to reduce the critical path nature of a loading event, but the input buffer just isn’t large enough to feed the beast, and the output buffer is non-existent.

Therefore, the ability to segregate jobs from different customers or even jobs with the same material and thickness for routing to a press brake, the next operation, is a valuable shop management tool to have available. Too often, the value proposition of organized laser WIP storage is overlooked. The secret to getting parts from the first operation to the second is to control when and how that takes place, and when that philosophy is embraced, a storage system can, indeed, offer several advantages:

Thanks to the ability to separate the product from the scrap in an efficient and controllable manner, the era of the automated sorting system for laser cutting is here. Sorting systems are no strangers to punching workflows where parts not removed in sequence could cause issues in the remainder of the nest. They are also much more forgiving to pick up considering the effective “kerf” that a punching tool creates when following an outer profile.

The speed of a high-powered fiber laser comes in handy here as the relative incremental cost of making nest programs “intervention free” by adding stress relief cuts and destructing inner cutouts to avoid tip-ups is too low not to consider. This is the real impact of high power, being able to cut competitively without having to cut corners. A programmer that is used to having to squeeze every last second out of an older CO2 laser just to keep up with production demands would feel unfamiliar with nesting for automated removal.

If a sorting system can pick and place a 100-lb. part in 10 sec., that’s an effective 600 lbs./min. run rate, well above what a laser would typically process on its own.

So, looking at a sorting system combined with a large outbound storage system, the benefits compound in the following ways:

Taking it to the next step, fabricators that have purchased an automated press brake will say that the real business impact happened when they started quoting work based on an automated workflow. They were able to win more jobs at larger quantities and increase their top and bottom line.

The same applies with sorting systems. While there is typically high margin on small lot sizes, the real returns that drive growth come in being able to deliver a higher quantity of product quickly and consistently. When trying to justify an investment, look at not only the jobs that comprise the current book of business, but also the jobs that were lost to competitors. It is very likely that cost per part played a big role in that buying decision.

The cost per part on an automated high-powered fiber laser cannot be beat by older equipment and expanding the order book without being able to exercise control over the additional work is a recipe for disaster. Using a combination of sorting and storage automation allows for shorter lead times, less back pain and a smaller footprint with expanded production capabilities. Sounds like a recipe for success.