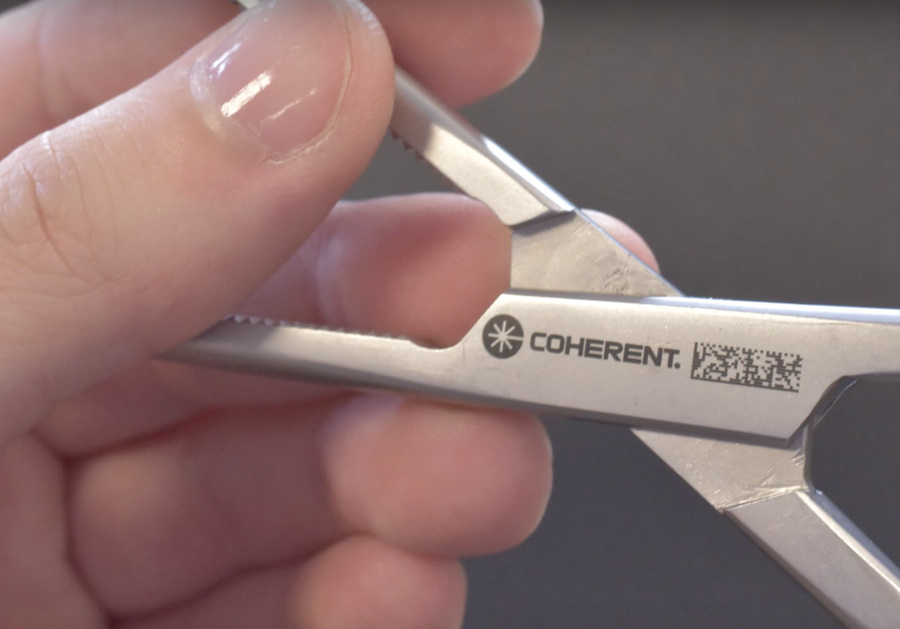 Across a variety of industries, many finished products and individual components are marked for the purposes of tracking and counterfeit prevention. Medical products, in particular, are legally required to carry a unique device identifier (UDI) mark.

But, marking of medical devices also presents a specific set of challenges because these products may have to undergo repeated sterilization or be compatible with implantation in the human body. A unique marking technology, delivered by ultrashort pulse (USP) lasers, enables indelible marking of passivated stainless steel surfaces, which is a material widely employed in medical and other industries.

There are four primary goals when marking passivated stainless steel medical devices. First, the marking must be permanent and not fade with use, including with repeated cycles of sterilization (autoclaving). Specifically, this involves exposing the device to high-pressure steam at a temperature of 250 degrees F, typically for at least 15 min.

The second goal is to ensure that marking does not disrupt the surface in any way that will allow subsequent corrosion. Stainless steel is inherently corrosion resistant because oxidation of its surface chromium atoms leaves a thin protective outer layer of chromium oxide. However, the thickness and integrity of this passivated layer is typically enhanced by chemical treatment with a mixture of nitric and citric acids, such as Citrisurf. Marking must not compromise this passivated layer.

Surface roughness is the third consideration, particularly for implants. Rough surfaces provide sites in which infectious agents can enter and reproduce. Also, surface roughness can produce a tissue reaction or cause blood clotting. In contrast, smooth surfaces help to prevent platelet activation and aggregation. Again, marking should be performed without significant material removal. That is, the mark should be a change in surface color or reflectivity, rather than an engraving.

Finally, the mark must be difficult to reproduce or alter to discourage counterfeiting. Substandard counterfeit products pose a significant problem in numerous industries, including medical device, automotive and aerospace.

Furthermore, product failure due to substituted counterfeit products presents a substantial liability and exposure to companies because they can cause downtime, or in the case of medical products, impact health. Encrypted bar code algorithms are already available that allow unique identifiers to be placed on products, which are difficult to fake. But, for these marks to be fully useful, it’s essential that they can’t be readily modified.

Laser marking is a widely used technique accomplished using a variety of laser types. These include CO2, pulsed solid-state and fiber lasers, among others; the best choice depends on the particular material involved and the type of mark needed. Typically, laser marking involves producing a color change within the bulk material or on a surface, or creating a macroscopic variation in surface relief (e.g., engraving) or texture that is easily visible.

Lasers with nanosecond pulse widths have long been used to create semi-permanent marks on stainless steel, single-use medical devices and consumer products where humidity is never encountered. However, this type of marking has limitations, particularly for reusable medical devices. That’s because nanosecond lasers deliver a combination of pulse energy and repetition rate that dumps a relatively large amount of energy into the material. This produces a primarily photothermal laser/material interaction. That is, the mark results from chemical/structural transformation of the stainless steel produced by intense heating and localized melting.

This transformation also includes diffusion of the chromium away from the surface layer, oxidation of chromium and iron atoms, de-mixing (dilution) of the alloy components and changes in the phase/grain structure of the re-solidified metal. These transformations severely compromise the passivation of the stainless steel surface.

Several other limitations of nanosecond pulse width laser marking reduce its utility for other applications, especially aesthetic applications (e.g., brand logos). First, the color and contrast of the mark changes with viewing angle. Second, this appearance is very sensitive to process conditions, probably due to variations in the thickness of the affected layer and the grain size within the transformed layer. As a result, consistent results can only be obtained in a limited process window. In addition, the thermal stress from the localized heating can deform thin items, such as sheet and tube substrates.

Fortunately, a relatively new laser process called black marking avoids these limitations. This technique relies on the use of USP lasers with pulse widths in the 10- to 20-picosecond range. The high peak power and short pulse duration of USP lasers produce a different and more subtle transformation of the metal surface.

Specifically, the USP duration minimizes the thermal buildup and limits any liquid phase to the outer few layers of atoms. The main result is the formation of a nanoscale surface texture called laser-induced periodic surface structure (LIPSS) that acts as a light trapping surface. This is accompanied by minimized diffusion of the metal atoms and limited de-mixing, together with only partial oxidation of surface chromium and iron atoms. So, while nanosecond lasers produce a mark consisting of chemically transformed black material, the USP laser creates a surface that visually appears black, but the chemical composition and alloy distribution are barely affected.

Black marking of stainless steels offers a unique combination of advantages that explain the fast-growing demand for this process in reusable medical devices, white goods and other products. First, the marks are extremely dark, providing high contrast that maximizes readability for human and machine vision readers. Just as important, neither the color nor the contrast is affected by changes in viewing or illumination angles or the type of lighting, further adding to their readability. Plus, the distinctive appearance of these marks makes them hard to alter or counterfeit.

For the reusable medical device market, there are two important passivation benefits. First, the marking process does not compromise a previously passivated surface. Next, where the marking is performed before passivation, subsequent passivation does not cause the marks to fade in any way. This robustness and flexibility to apply the mark at different process steps maximizes its value and lowers its cost impact.

Similarly, black marking does well when subjected to the repeated re-processing (i.e., autoclaving) that reusable medical devices typically experience. And, the minimal thermal effects associated with this process make it well suited for use with thermally vulnerable and fragile parts, such as wires, tubes, thin sheets and small implants, with no risk of any shape change.

In practice, black marking is implemented using essentially the same type of equipment as traditional nanosecond, laser-based marking equipment, but with a different laser. The USP lasers utilized for this application typically produce output at a wavelength of around 1 micron, which is the same as solid-state nanosecond lasers and pulsed fiber lasers. So, USP lasers can be used with the same beam delivery optics and scan heads utilized for traditional laser marking.

The product is either configured as a sub-system (laser, beam delivery system and all associated control electronics and software) that can be mated with existing part handling/motion robotics already present in the production line. Or, it can be implemented as a complete standalone system, including robotic automation.

In the case of Coherent, the PowerLine Rapid NX sub-systems and ExactMark 230 turnkey systems are supplied with a picosecond laser having a pulse repetition rate up to 1 MHz to enable fast marking. They also all feature the company’s VisualLaserMarker (VLM) software suite. VLM consists of a graphic editor to generate the layout plus a CAD extension to import all common file types: DXF, BMP, JPG, PDF and AI. Special objects and other parameters for marking are all easily configurable.

ExactMark 230 features a solid mounting platform for maximum stability and mark resolution. The workspace is designed for maximum flexibility to accommodate different part sizes and geometries. Up to three linear axes of motion operate under servo control, and this can be combined with an optional rotary axis for tubes and other curved parts. Custom part fixtures and clamping can also be supplied. In addition, the ExactMark 230 includes an optional vision system (both camera hardware and software) to enable automated pre- and post-processing inspection needs.

Direct permanent marking on stainless steel substrates is becoming increasingly desirable in order to comply with medical device regulations or for aesthetic purposes on many other products. A new laser process addresses this market need, providing a wear-resistant mark that has no need for re-passivation and that is clearly legible even after repeated autoclaving.