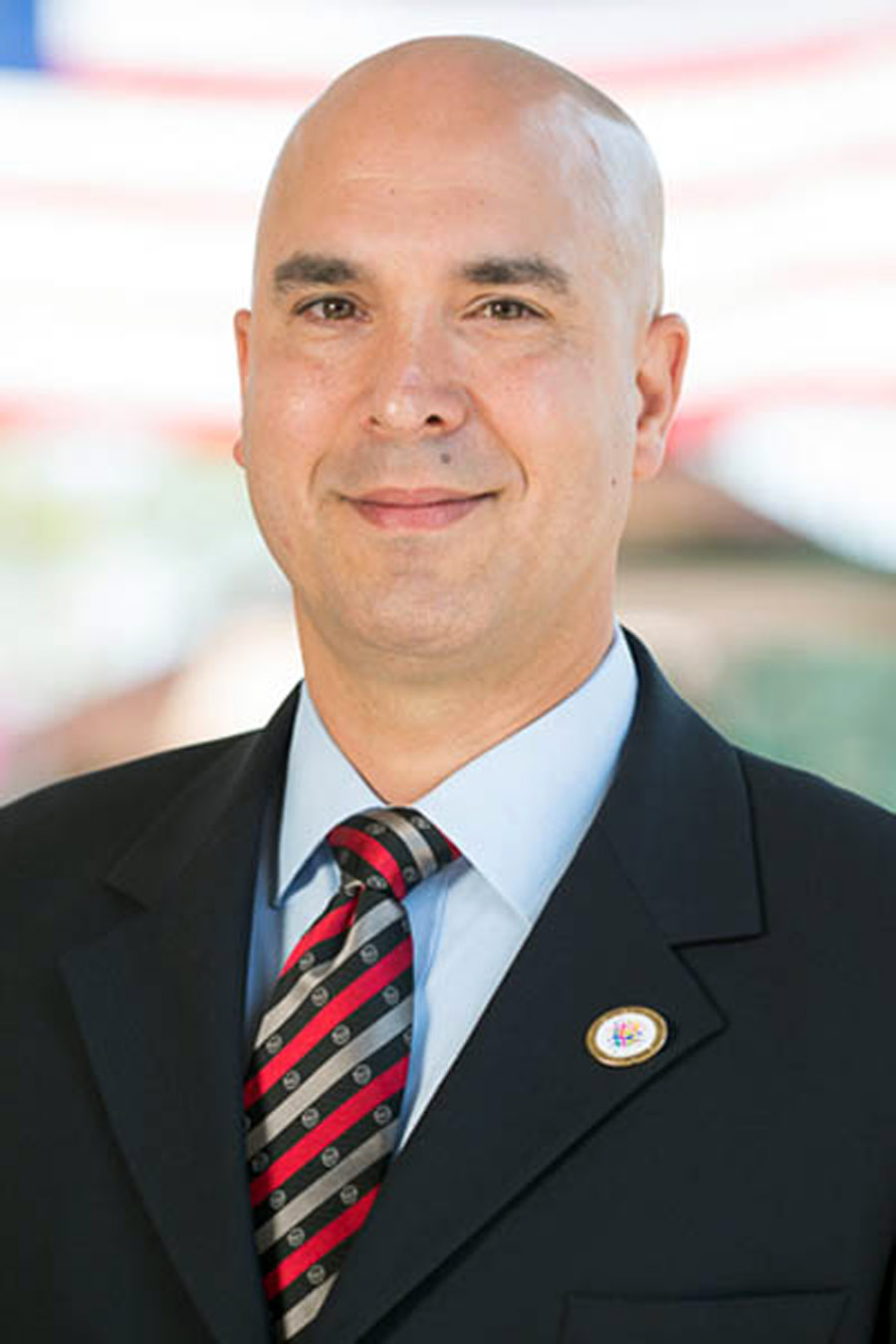 Currently, there are more than 450,000 unemployed veterans in the United States. Whether those numbers are based on a lack of training, difficulties transitioning into civilian life or disabilities, such as post-traumatic stress, Hernán Luis y Prado is doing something about it.

Workshops for Warriors is a state-licensed, board-governed, fully audited 501(c)(3) nonprofit school with a goal to train, certify and place veterans, wounded warriors and transitioning service members in advanced manufacturing careers. Launched in 2008 by Luis y Prado, it gives purpose and dignity back to these service men and women that have sacrificed so much for our country.

Coincidentally, his efforts are also solving the manufacturing industry’s No. 1 problem: filling the skills gap. And he needs everyone in the industry to get on board. 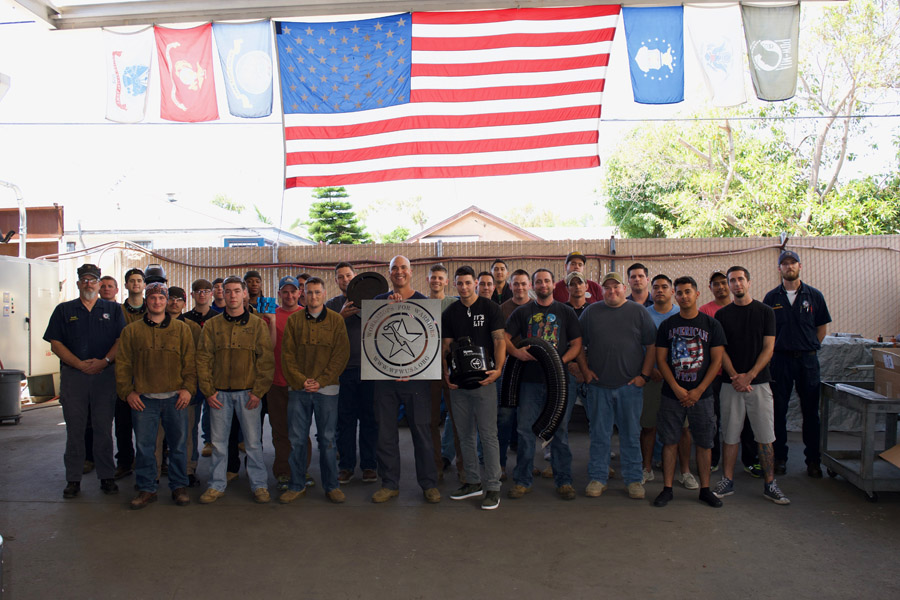 Since the school’s opening in 2008, 421 students have graduated from Workshops for Warriors programs, earning 2,350 nationally recognized certifications.

Throughout one’s life, there are moments when everything you thought you knew about the world is turned upside down. For Luis y Prado, that moment happened during an otherwise normal afternoon.

“I was in a mall with my wife – I think we were outside of an FAO Schwartz or something completely common like that – and we ran into this guy, John, who I had just seen in Iraq a couple months beforehand,” Luis y Prado recalls.

When the two went in for a hug, Luis y Prado suddenly realized that John was in a wheelchair.

“I’d noticed that he was in a wheelchair, but I guess I thought he’d injured his ankle or something,” he remembers. “But then it hit me. He didn’t have his legs anymore. Instantly, I was seeing all of the things that he wanted to do with his life and I saw them all evaporating. It hit me so deeply.” 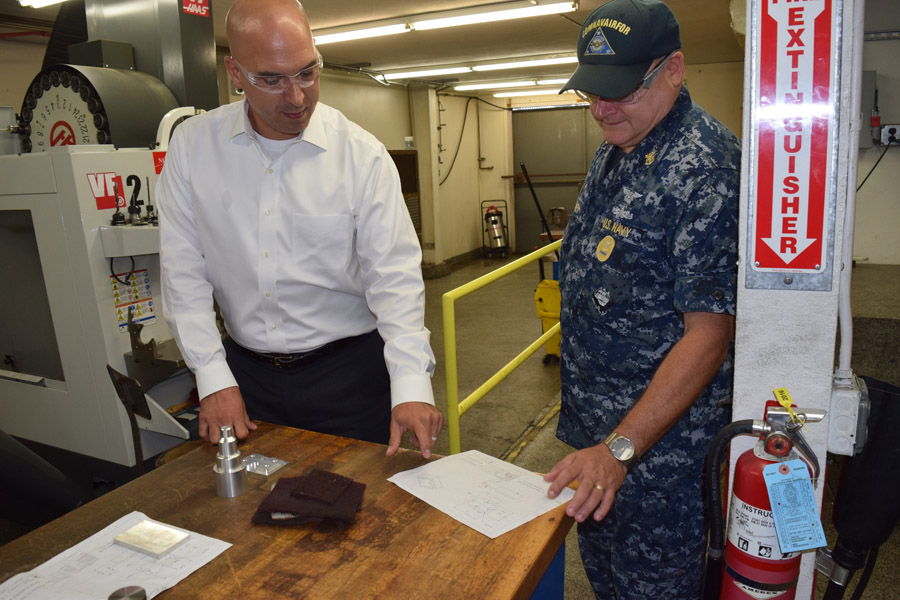 Hernán Luis y Prado, founder of Workshops for Warriors, served in the U.S. Navy for 15 years, completing three combat tours of duty in Iraq and Afghanistan.

In those pivotal moments, there are two routes a person can choose between. Stay on the same path or embark on a new road – one that truly internalizes the new reality that’s presented itself. And that’s the direction that Luis y Prado chose to take.

“Here I was, this tough guy, this combat veteran, and I sank to the ground and grabbed onto my wife’s elbow and said, ‘we’re going to sell everything we have and we’re going to create an advanced training center so that guys like John can have a viable future,’” Luis y Prado explains. “And my wife, to her eternal credit, said, ‘of course.’” 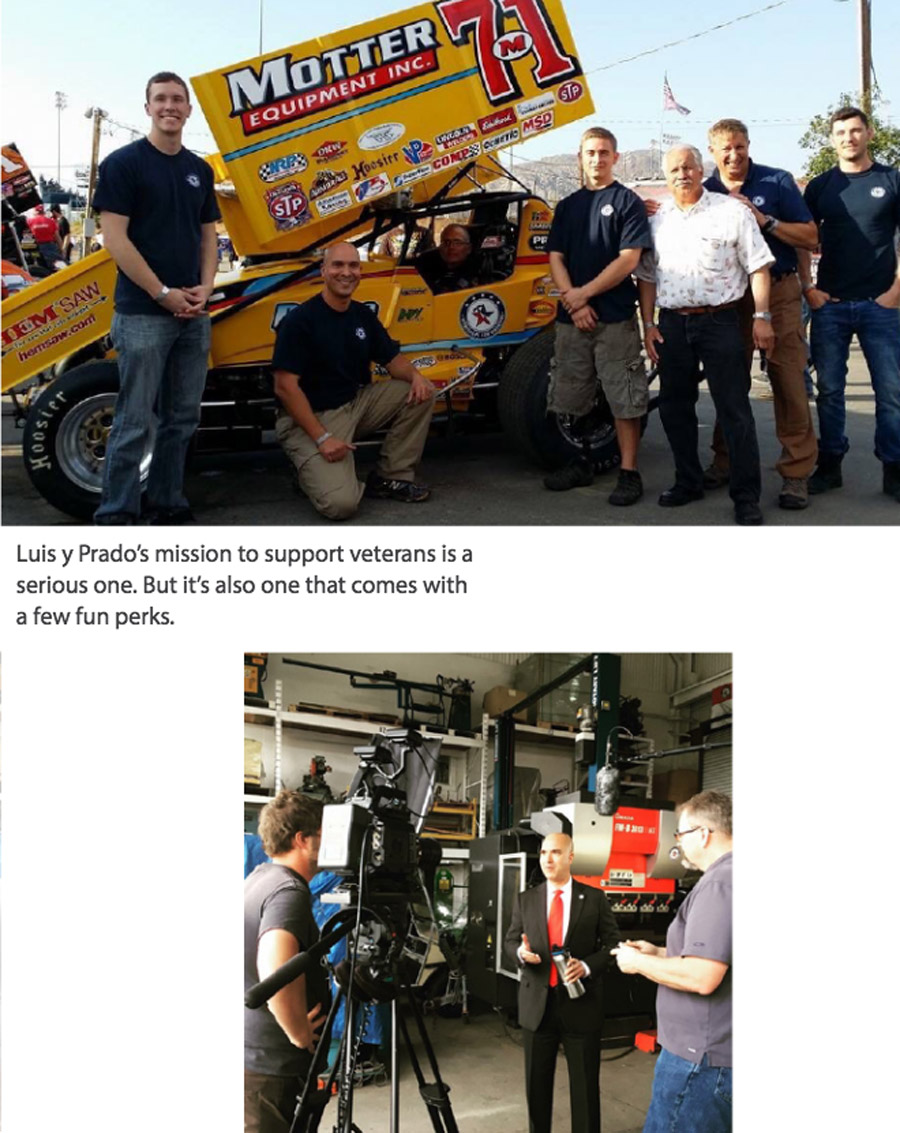 Having the idea of founding a nonprofit organization and executing on that idea are two entirely different things. Change often requires making personal sacrifices. It also requires a lot of patience and perseverance. Luis y Prado knows that firsthand, and he’s fairly blunt when he talks about the beginning of his journey toward making WFW the organization that it is today.

“Like every other stupid idealist, I thought this is a good idea that should be easy to get off the ground,” he says. “I’m going to train and place veterans in advanced manufacturing careers. America’s workforce needs people and veterans are a great fit, so it’s a win-win, right? Then, all I got were crickets.”

Luis y Prado initially didn’t realize how much money he’d truly need. But he quickly got a feel for what he was up against money-wise.

“I discovered it’s a lot more expensive to run a school than to run a machine shop,” he explains. “Essentially, you’re running a shop with people that are clueless about machining and fabricating, and so they’re breaking tooling or running through consumables like you wouldn’t believe. I was struggling to find a way to finance it.”

In the midst of it all, a few representatives from the San Diego Navy came knocking. They’d heard about his new school and were hoping that some of the students could help with machine repair on the base. Although the students weren’t quite ready for that type of work, the proposition got Luis y Prado’s wheels turning.

“I hired some really good millwrights to go onto the base and do the machine repair work,” he says. “For the first five years, that work became a side business called VetPowered, which provided the money we needed to fund the school.”

VetPowered was created out of necessity. “I realized that just because I was doing the right things for the right reasons didn’t mean that the money would just start flowing into our bank account.”

Despite not having experience running a nonprofit, Luis y Prado quickly learned the ropes. The importance of looking for ways to make the organization sustainable through long-term contracts and donors and through other revenue streams, such as VetPowered, was key. He also learned that giving up isn’t an option. But then again, his time in the service had already taught him that.

“When you run a school, you have different alligators, eating different things – sometimes it’s cash flow, other times it’s a frustration when something is taking a lot longer or costing more money than it should,” he explains. “I remember a particularly bad month where we had no money coming in. We couldn’t continue operating for another week. The team felt hopeless.”

But during that low moment, there was another knock on the door – this time, it was a student. Luis y Prado recalls the look on the student’s face and the renewed hope that he brought. He simply wanted to say thank you. He’d spent 17 years in the Navy and had full confidence that he would find great success post-military life only to have that hope dashed after struggling to find work.

“He told us that Workshops for Warriors was giving him a viable path forward and that he was finally convinced that he was going to succeed,” Luis y Prado says. “That totally recharged us and put us back on track, and literally, the next day, we were told that we were going to get a big donation.

“It’s funny how in one of the moments of darkness and almost despair, someone can walk in like that and remind us of our mission and that we, too, can succeed.” 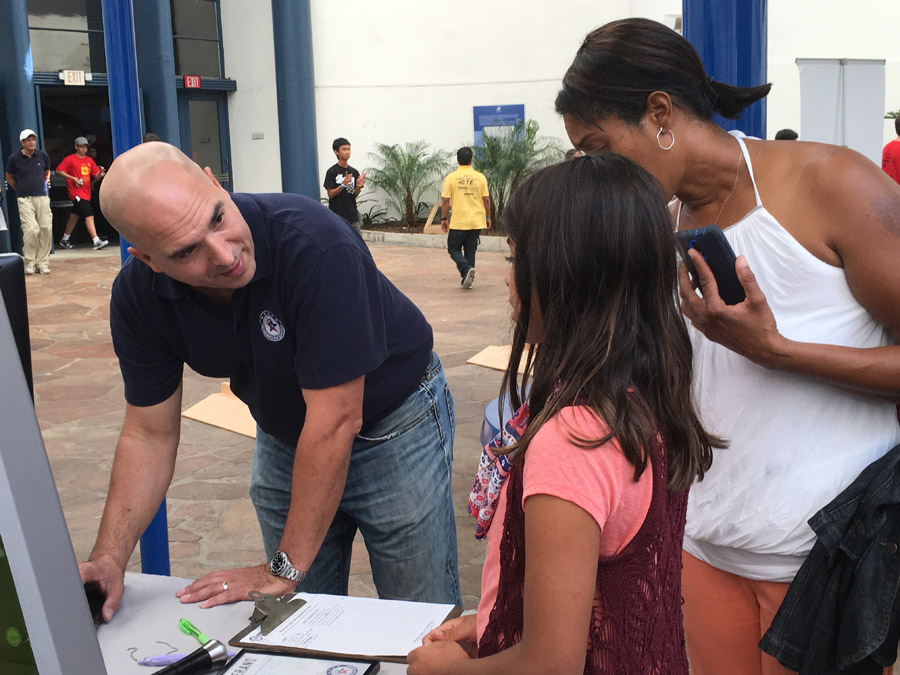 Workshops for Warriors founder, Luis y Prado, is an active member of his local community in San Diego, Calif.

Staying motivated and committed to the cause is essential in making an organization like WFW work. But just like any manufacturing business that keeps data on the numbers of parts produced or the profits made, nonprofits should also establish key performance indicators to measure their philanthropic impact. As Luis y Prado says, “everything that’s measured improves.”

With advice from his wife, a professional survey methodologist and statistician, Luis y Prado made a point of collecting data early on to better track and measure the work WFW set out to do. When a group like WFW is fighting for relevancy in the saturated world of nonprofit organizations, tracking and measuring impact can be a huge differentiator.

“If you’re Boeing, for example, and you have every Tom, Dick and Harry asking for a donation, you’re going to have to say no to a lot of people,” Luis y Prado explains. “So we decided that we were going differentiate ourselves by creating a metrics-driven organization that knows what success looks like and shoots for that every day relentlessly and intelligently.

“When you’re a nonprofit, you’re literally surviving due to the kindness of strangers,” he continues. “We only survive based on philanthropy, private donors and manufacturing companies that want to donate. The longer you’re around, the longer you have a track record. And people like to donate to someone with a track record.”

For anyone who’s met Luis y Prado, a few words come to mind: committed, compassionate, hard-working and focused. But saying that he’s relentless might be an understatement. He has no qualms asking for donations and frankly is a tad frustrated that more of the manufacturing industry hasn’t embraced WFW’s approach to closing the skills gap.

These days, one approach for filling empty fabricating jobs is to hire a placement agency to track down a qualified candidate. The cost of doing so can be hefty and sometimes those individuals don’t stay on the job long enough to justify that cost. But Luis y Prado has an alternative to forking over big checks to employment agencies: support a veteran at WFW.

“Being a combat vet, I know that anyone can experience a visceral change in their life that takes them in a different direction. I’m hoping that Americans and manufacturers in particular take that to heart to do more for our communities and our nation,” he says. “If manufacturers banded together and put their shoulder to the wheel to help push WFW forward, we could further develop this training pipeline to be replicated throughout America.” 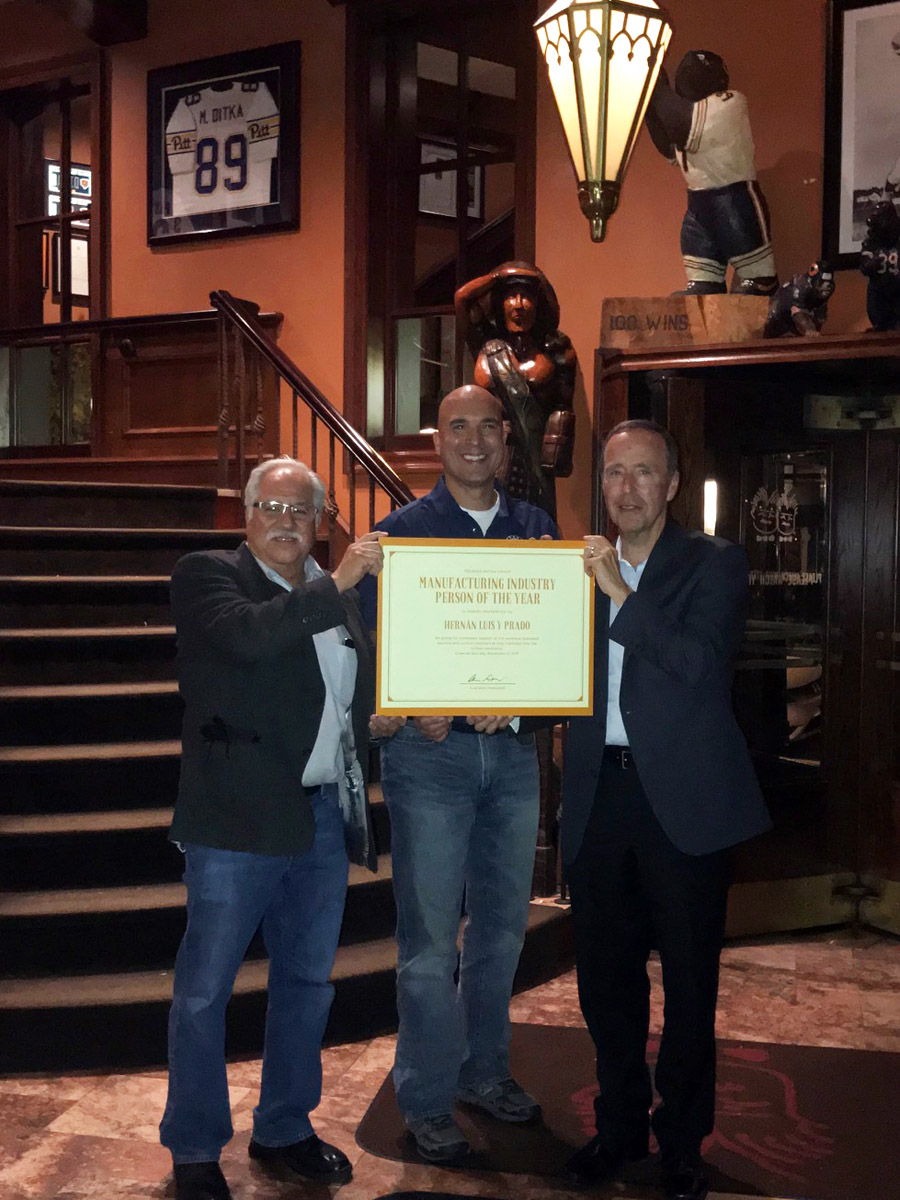 To date, WFW has ushered 421 graduates through its classes, earning more than 2,350 nationally recognized certifications. Luis y Prado says that the more companies that get on board supporting WFW, the more good the organization can do.

So yes, Luis y Prado is relentless, but he is also incredibly humble. He says that WFW wouldn’t be where it is today without the companies, individuals and organizations that have come together to support his vision.

Financial donations have come from countless companies, such as Reliance Steel & Aluminum Co. and BLM Group USA. Machine donations have come from a slew of equipment manufacturers, including mills and lathes from Haas CNC; a fiber laser marker, ENSIS 3015 AJ laser and press brake from Amada; sawing equipment from HE&M Saw; a press brake and shears from Betenbender Mfg.; a waterjet from Flow International; various equipment from Scotchman; and 3-D printers from Stratasys and Markforged.

For anyone that’s still on the fence, there are a few more reasons to consider donating to the cause. OEMs can be confident students will be trained in their technologies with their donated equipment– as opposed to their competitors’. By making financial donations, firms and individuals can be confident their money will be used wisely.

To put that into context, 45,000 veteran service organizations exist in the United States, but only 2 percent have revenues of more than $1 million per year. WFW is within that 2 percent. Of that 2 percent, only 17 percent have full-time employees. WFW falls within that 17 percent. And, WFW works hard to keep its overhead costs low so that more than 83 percent of donations go directly to training veterans.

“We have to rebuild America’s infrastructure and to do so, we have to fortify our advanced manufacturing pipeline,” Luis y Prado says. “We wouldn’t hesitate to rebuild our roads. This is apolitical. Everyone loves veterans and everyone can agree that having a veteran transition into an advanced manufacturing career is better than having them transition into homelessness or unemployment.”

To donate to WFW, please visit the organization’s website here.