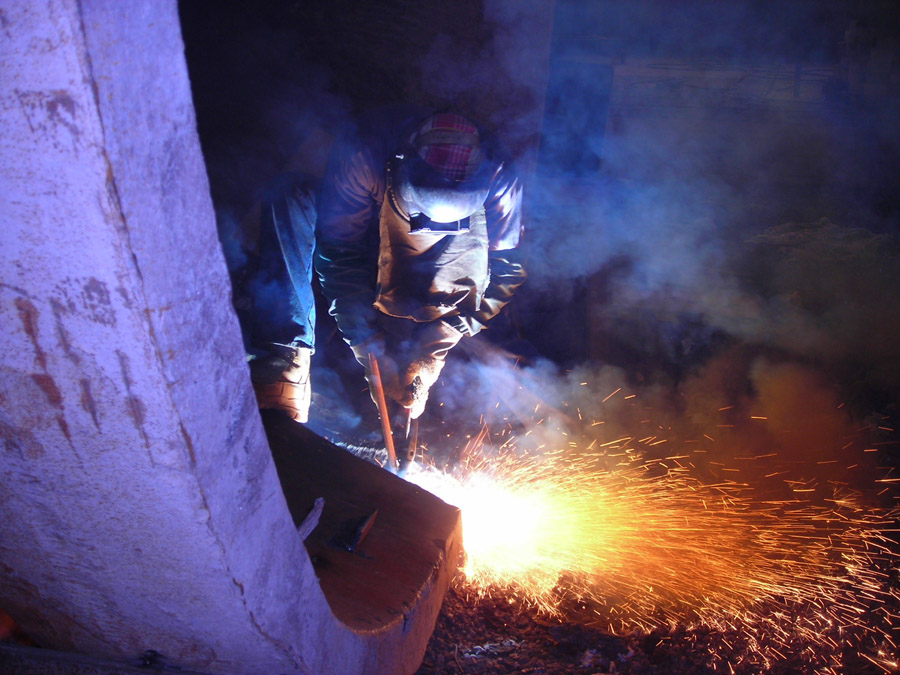 For anyone who’s repaired a forging die, we salute you. Considering the temperature inside a forge shop, it’s sweltering work that not just anyone can or wants to do. It takes a skilled welder who’s willing to deal with noxious fumes in an extremely hot, humid and dangerous environment.

In addition to being hot and steamy, the work happening in a forge is self-destructive. There is a constant pounding of dies, which means that they constantly crack and wear. The dies in question are those used in hammer and press applications, but similar repairs are frequently required for other forge equipment, such as sow blocks, rams, columns, bases and tie plates.

The process for repairing forge equipment is called floodwelding, an electric welding process for the rapid filling of a cavity. In addition to filling the cavities in broken or worn dies, floodwelding also allows for infinite remachining of dies. This allows forges to avoid the cost of buying new dies and also offers the opportunity to machine totally new configurations in older dies indefinitely.

The manufacturing industry of today is highly automated, so it was only a matter of time for floodwelding to receive the automation treatment. Thanks to significant research and development at Weld Mold, a new technology is available to get welders away from the heat, smoke, fumes and radiation as well as the associated health issues that result from the welding repair process.

The company’s new WMC SafetyRobot telerobotic welding system allows operators to perform remote floodwelding in a temperature-controlled environment. In fact, the SafetyRobot can also get welders closer to the workpiece, so to speak. Through the use of cameras and monitors, an operator can see the robot welding up close in real time.

“If they’re out there welding, they can’t have their face very close to the weld,” Miller says. “With the use of monitors, operators can see what’s happening right at the weld puddle. As just one example, they could see porosity as it’s happening, as it’s creating damaging bubbles in the weld. Standing further away from the piece, it would be harder to see that.” 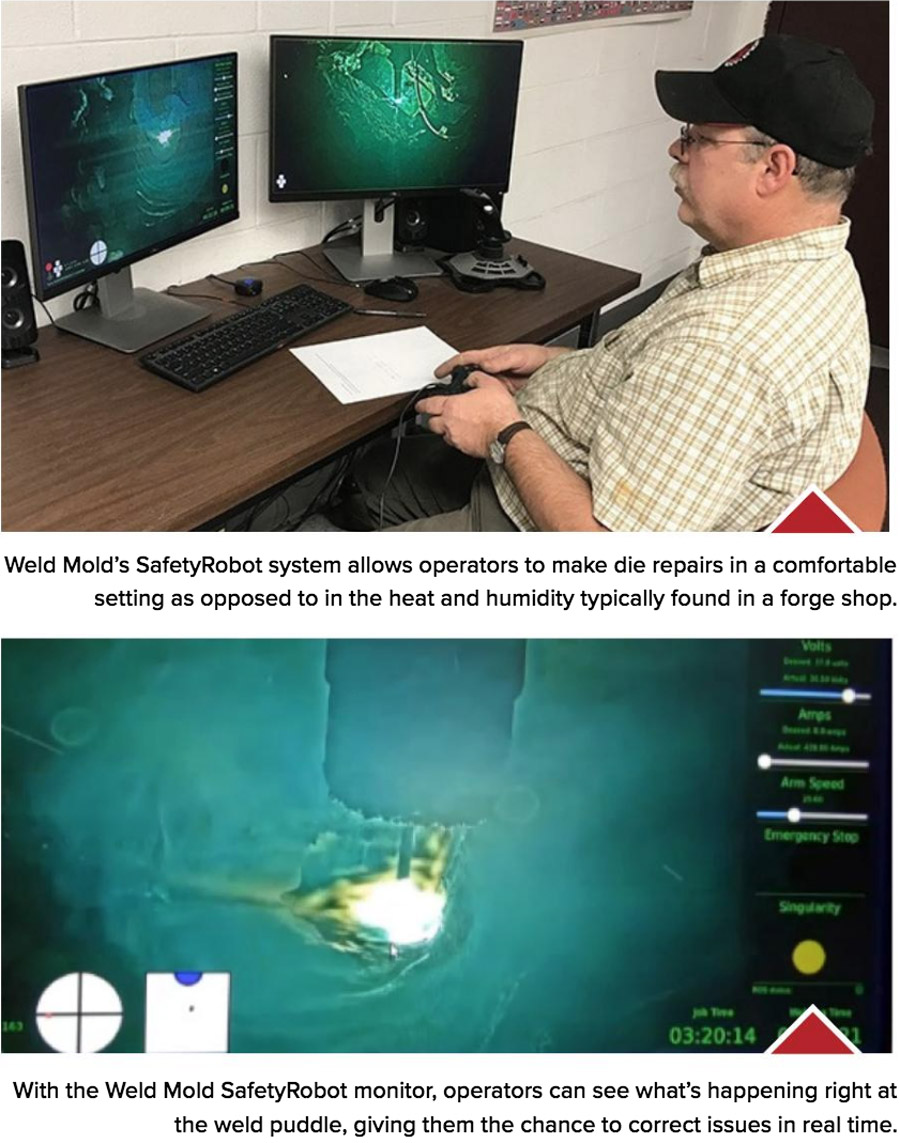 The WMC SafetyRobot system package, which includes the operator’s booth and robot, arrives complete in a 20-ft. shipping container. Included in the package is a workstation with two monitors that allow operators to see different views of the welding process – one being a closer view of the weld that’s mounted on the torch and the other coming from another angle chosen by the operator.

The robot is operated remotely using wires and not mechanical connections like the type used with traditional floodwelding equipment. For the younger generation, the robot is set up with a PS3 controller, but it could easily be converted to a joystick if that’s what an older welder is more comfortable with.

“Having the operator sit in a booth versus standing over the smoke and the heat of the weld being performed, which I’ve done for nearly 30 years, is a very nice alternative,” explains David Lee, technical manager at Weld Mold. “In order for the weld repair to perform as we want it to, there’s a longstanding procedure in place: preheat, interpass temperature control, peening during the weld cycle, covering up the die, post-heat and tempering, etc.”

Echoing Miller’s description of floodwelding as similar to additive manufacturing, Lee sets up a visual to further describe the process. He uses a 9-in.-by-18-in.-by-2-in. sheet pan as an example of an average cavity that’s needs to be filled.

“Typically, floodwelding is done on an angle, so tip your sheet pan to 30 degrees,” he says. “We’re using a large electrode, and by large, I mean 3/4 in. in diameter by 3 ft. long. We start at the very bottom, at the lowest part of the pan and we start to develop a liquid puddle that runs the width of the pan. As we continue, we follow the angle of the pan all the way to the top until it’s completely filled.”

Although the process is traditionally done with large diameter electrodes, currently, Weld Mold is leveraging flux-cored wire with its robot. As the system evolves, Weld Mold says electrodes will most likely be a part of the next version.

Currently, the WMC SafetyRobot package includes 0.035-in. to 3/16th-in. wire welding capability in addition to all of the relevant interconnecting cables and a complete welding power source. Clearly, Weld Mold doesn’t shortchange customers on a single element. The system can be operated totally manually or in a fully programmed mode.

As mentioned, the package includes the operator’s booth, robot and workstation complete with monitors and controls. Additionally, the company includes a table, chairs, heating and cooling, and lights as well as an air hammer, needle scaler, air hose and stand. The self-contained booth is fully ready to connect to utilities, such as electricity and shop air, and a safety cage with lights, interconnecting cables, safety switches and a heavy-duty die holding turntable is part of the package. The package is certified “Safety Verified,” ready to be included in the customers’ safety validation program.

“Removing the welder from that hot and taxing environment is essential,” Miller says. “Having somebody doing this work in a T-shirt and jeans, listening to the radio and drinking a cup of coffee not only improves their quality of life, but also improves productivity. They can weld continuously without having to constantly stop to wipe their brow or pause to get away from the heat.”

It also provides the ability to track job times, as well, which ultimately will increase productivity. The monitors offer two time recorders to keep track of when the computer is booted up and the overall arc-on time. By having that data, users can see where their efficiencies are and where there is room for improvement. 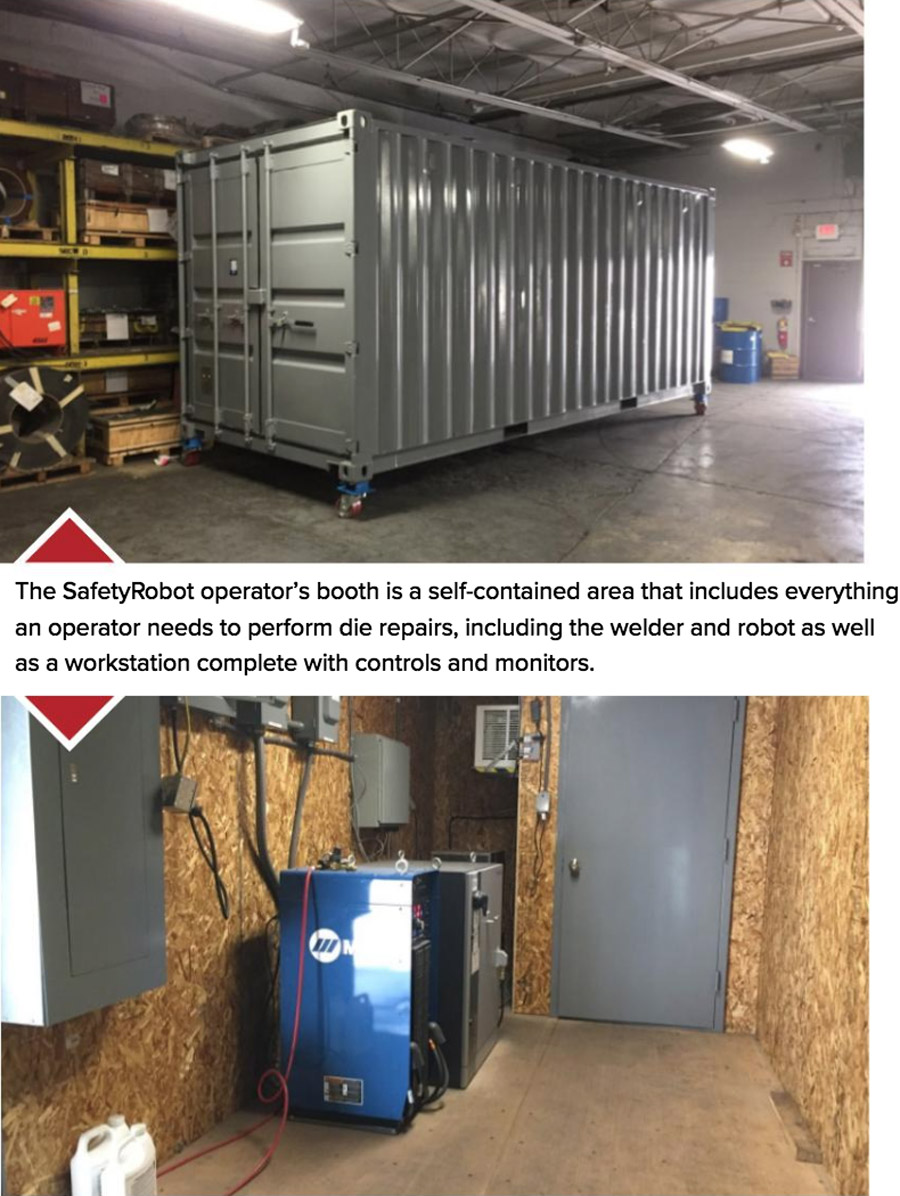 “For even the most efficient operator, it helps monitor his course on the job to better understand what the actual job time should be,” Lee says.

To ensure that operators are as productive as possible, Weld Mold promises two weeks of onsite training in addition to six months of repair and maintenance services if the equipment isn’t functioning as expected. In regard to the onsite training, Miller reminds potential customers that the job still requires an experienced welder.

“Operating this system still requires the individual operating it to be able to recognize good and bad welds,” she explains. “You can’t just take somebody off the street and throw them on there. It takes training to be able to operate it, but it also requires a certain level of welding experience.”

In terms of automating the floodwelding process, it makes sense that Weld Mold would be the company to do it. After all, the process was originally developed by Weld Mold’s founder Matt Kiilunen back in 1945. In fact, his contributions to the forging industry were so impactful that his floodwelding process was awarded an historical landmark designation by ASM International in 2017.

In a press release, Weld Mold and Kiilunen are described as taking “die repair to the next level – increasing die life while reducing customer costs.” The release goes on to state that the historical landmarks designation recognizes “sites and events that have played a prominent role in the discovery, development and growth of metals, metalworking and all engineered metals.” Other companies to have received the designation include AT&T, Republic Steel and General Motors.

“Because the designation is also granted to sites – in addition to companies – it puts us in the category with the Statue of Liberty and the Eiffel Tower,” Miller says. “It was incredibly meaningful to us.”