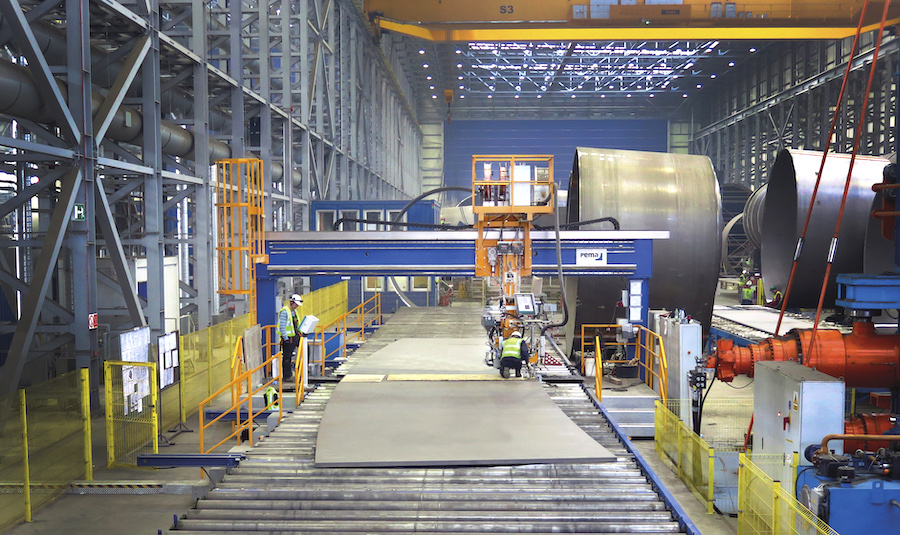 Fossil fuels reign as king in energy production in the United States, but wind turbines are gaining ground as a source for clean energy. And that’s good news for metal fabricators and companies that build the massive welding automation systems that ultimately play an integral role in the construction of wind turbine towers.

Wind energy has come a long way since metal blades were invented in the 1890s. As more and more Americans embarked on westward expansion, thousands of small metal blade-equipped windmills dotted the landscape. But it wouldn’t be until the energy crisis of the 1970s that alternative sources of energy, including wind, were seriously considered. In the 1980s, the first large wind farms began popping up.

The roughly 13 megawatts of energy produced by wind farms throughout the United States in the 1980s pales in comparison to what wind turbines generate today – approximately 82,000 megawatts. Also outsized in comparison is the legacy wind turbines’ size versus what’s being constructed today.

The first large wind farms, such as the San Gorgonio Pass wind farm located 90 miles east of Los Angeles, featured wind turbines around 80 ft. tall. The need for more efficient and highly productive turbines, however, has pushed manufacturers to go larger and higher.

The larger the turbine and the higher it is hoisted into the air where the blades can reach faster and more consistent winds, the more energy that’s produced. It’s a fairly simple concept, but what’s not so simple is that larger support structures are required for the larger towers, turbines and blades.

As an example of the impressive size of the latest wind turbines being developed, GE Renewable Energy announced in 2018 that it was producing the Haliade-X 12-megawatt wind turbine, the most powerful offshore turbine planned to date. At its peak height, the blades will soar 853 ft. into the air (for reference, the Eiffel Tower is only 200 ft. taller).

Jukka Rantala, vice president of key accounts for Finland-based Pemamek, a world leading manufacturer of welding automation solutions, is well aware of the trend to go taller and bigger in the wind energy sector. After all, his company engineers the solutions that are required to meet the needs of turbine manufacturers.

“Bigger, heavier and thicker,” Rantala says of the materials wind tower manufacturers work with. “I don’t know if there is any limit, but the size of wind turbines is growing all the time.”

Pemamek, which was founded in Finland by two farmers in 1970, had modest beginnings, manufacturing small welding positioners that were sold to small job shops. But by the 1980s, the company began to supply automated solutions for its global customers under the present family ownership.

“That was the beginning,” Rantala says. “I would consider those positioners more like a product. The positioners we make today are more like solutions, often integrated with another product.”

Pemamek’s approach is one of modern production automation throughout the entire wind tower manufacturing process. The production equipment for wind towers include Pemamek’s column and boom machines, welding platforms for precise heavy-duty welding and roller beds for rotating materials, which sometimes are as heavy as 1,500 tons.

All are guided by user-friendly control systems, allowing operators total control over the process using a touchscreen, either from the shop room floor or from a compartment in the column and boom that overlooks the production process.

Integrated circular milling is also available together with platform-type welding systems, which allows operators to bevel the edges of the materials so the automated welding solution can achieve an efficient and high-quality weld.

“The preparation on those applications must be perfect,” Rantala says of the beveling feature. “The only way to make the perfect preparation is by milling, so we have our own milling technology that can work with thicknesses of 4 in. or more. These types of solutions are used especially in the offshore wind tower industry where the foundations of the towers are made of very thick and heavy materials.”

Because the materials wind tower manufacturers work with are so large and heavy, mishaps can lead to disastrous outcomes. As competition in the wind energy sector becomes more intense, Pemamek stands behind its position that a more automated welding solution leads to improved safety and increased profits. That’s one of the reasons it offers a machine for horizontal flange fitting, which allows operators to work on a piece without having to manually turn a section of the tower upside down while its being processed, resulting in improved efficiency and enhanced safety.

“You have to have a safety system,” Rantala explains. “The materials are so heavy that absolutely everything needs to be safe. The workpieces weigh tens and even hundreds of tons – you have to respect them.”

One of the challenges in working with large steel structures lies in the inaccuracies of geometric measure tolerances, which causes a fluctuation of the weld groove cross section if they’re not milled. Basically, errors can occur between what was drawn up in CAD modeling and what is produced on the actual workpiece.

To meet the inaccuracy challenge, Pemamek developed WeldControl software, which is available in five versions for different applications and is continually updated. One version allows operators to scan groove cross sections and automatically generate welding paths for precise work. The scanning process is basically a dry run over the groove followed by the software providing suggestions for the best welding path.

“We measure the volume of the groove,” Rantala says. “That’s important to us because we’re talking about really thick materials. To fill the total gap you have to make several runs with an automated welding system. Before we start welding, we scan the groove and plan how many passes we have to weld.”

Pemamek refers to WeldControl 300, which is the one of five versions of the software that many heavy-equipment manufacturers have adopted, as “the most advanced robot programming and welding system available in the markets.” The 300 version features “robotized welding solutions for heavy fabrication,” making it a perfect fit for the wind energy sector.

While the American wind energy market is becoming more and more receptive to Pemamek’s products, a majority of the customers are European- and Asian-based companies where wind energy is a higher priority. Despite being on different continents, employers are finding similar difficulties related to the skills gap, which is a big driver for more automated manufacturing technology.

“It’s a global issue, for sure,” Rantala says of the skills gap. “It’s more and more difficult to get younger people into this kind of work. It doesn’t matter if it is Europe or Asia, it’s exactly the same problem. That’s why we are promoting automation. When a customer invests in automation, they can hopefully attract the next generation to work with them.”

But automation is also about meeting productivity needs.

“Our customers need to make wind towers faster and faster,” Rantala says. “Productivity is extremely important for all our customers.”

Pemamek’s automation line includes many components, but thanks to WeldControl and other solutions, one operator and one touchscreen controller can control them. It’s a solution for the skills gap, the productivity needs of customers and the growing wind energy market. 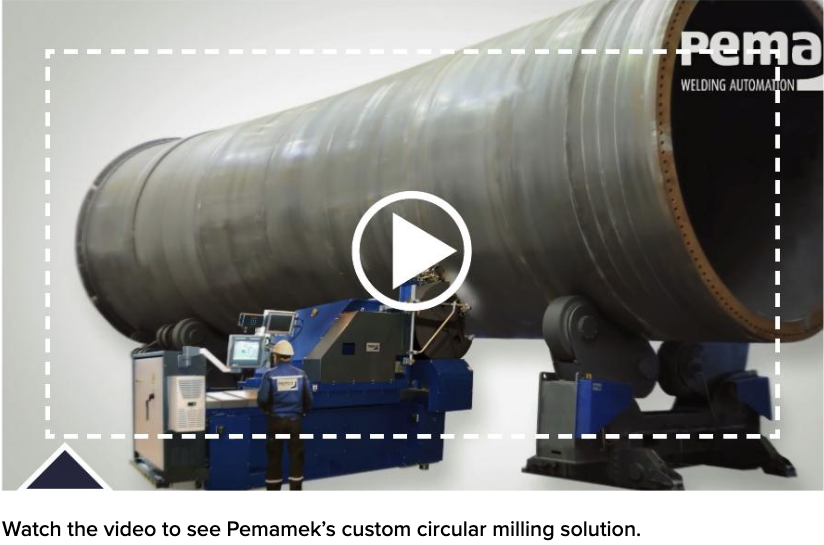