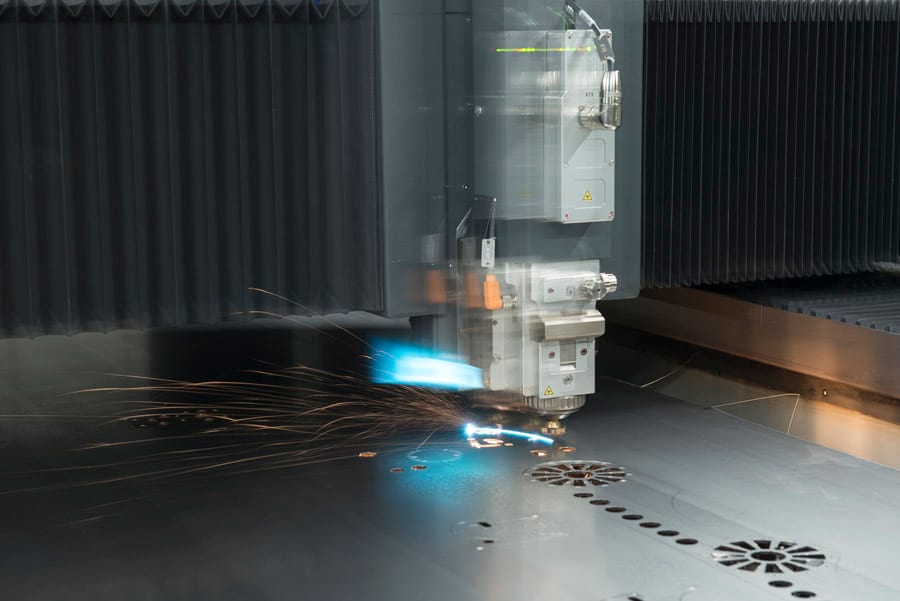 Other than fiber’s signature green-glass windows, it’s hard to tell the difference between a fiber and a CO2 laser cutter. To the untrained eye, they’re the same: massive metal boxes with laser cutting heads inside.

Although the two technologies come in similar-looking packages, their operational differences are distinct. Compared to their CO2 predecessors, fiber lasers process a wider range of material in a faster, more energy-efficient manner. Depending on the material, fiber lasers have been clocked cutting sheet metal five times faster than CO2 lasers.

Understanding the potential of fiber laser technology, thoughtful machine builders, like LVD Strippit, knew they would have to take a different approach when designing the new machines. Simply put, the power and high dynamics of a fiber laser couldn’t possibly be harnessed within a CO2 machine frame.

Since the early days of fiber lasers, the need for robust machines has continued as power levels have steadily increased. This is especially apparent as most OEMs today now offer fiber power at 8, 9, 10 and even 12 kW. To say the least, the design of the laser’s machine frame ultimately dictates the level of its cutting success. 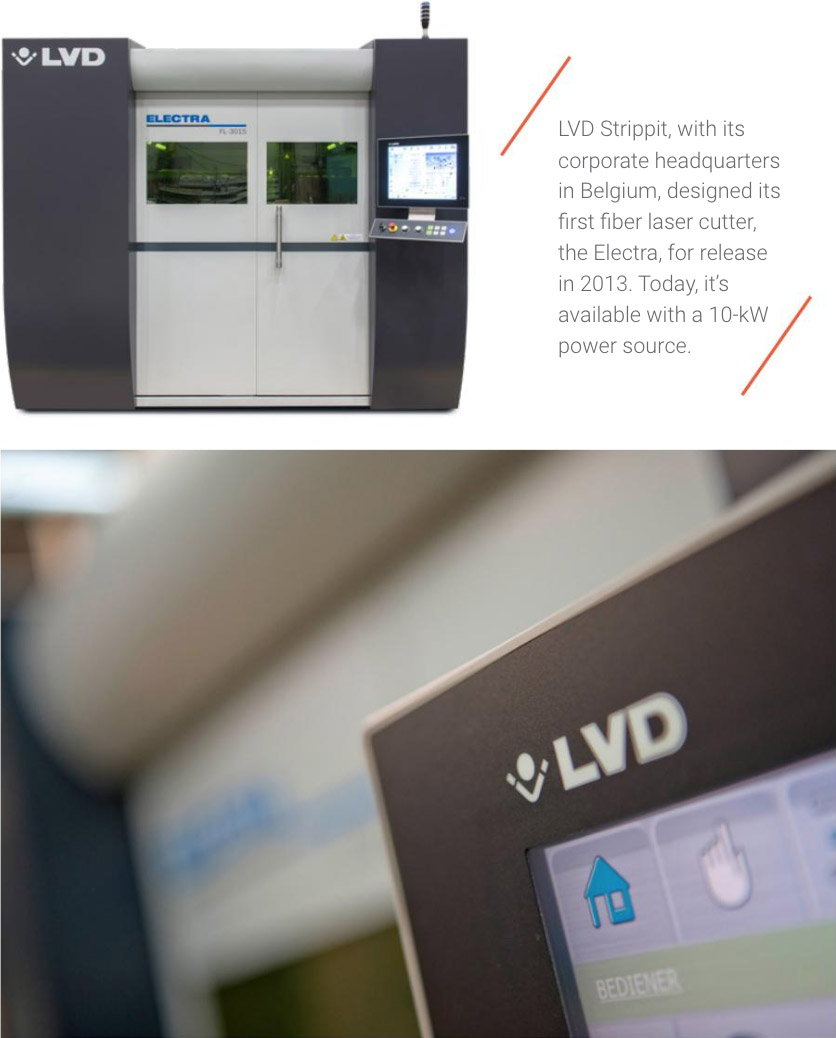 To set a baseline for the inevitable rise of fiber lasers, LVD Strippit designed its first fiber laser cutting machine, the Electra, with future capabilities in mind – ever higher speeds and thicker materials processing. Since launching the 2-kW Electra in 2013, the laser power has continued to climb. At Fabtech 2017, LVD Strippit presented the machine with 8 kW; at this year’s Fabtech, it was 10 kW.

“We looked at the specs of our pre-existing CO2 laser platforms and weren’t 100 percent convinced that they could provide us with the dynamics that we needed with a fiber laser,” explains Stefan Colle, laser product sales manager at LVD Strippit. “Fabricators want to take advantage of fiber’s high cutting speeds, but that capability goes beyond acceleration from zero to maximum. The goal is to process whole intensive parts at an overall faster time than the CO2s of the past, which requires high dynamics not just in terms of acceleration but also deceleration.”

To manage the dynamic movement of the cutting head and the laser power behind it, LVD Strippit pinpointed a variety of machine aspects that would require specific redesign. Those included the overall frame, the gantry, the cutting head as well as the exhaust table.

“It’s always a challenge to bring more power to market, but not just surrounding the development of the laser source,” Colle says. “The source isn’t the problem at all actually – these days, you can easily find laser sources up to 20 kW. For the machine builder, it’s designing something that can harness that power.” 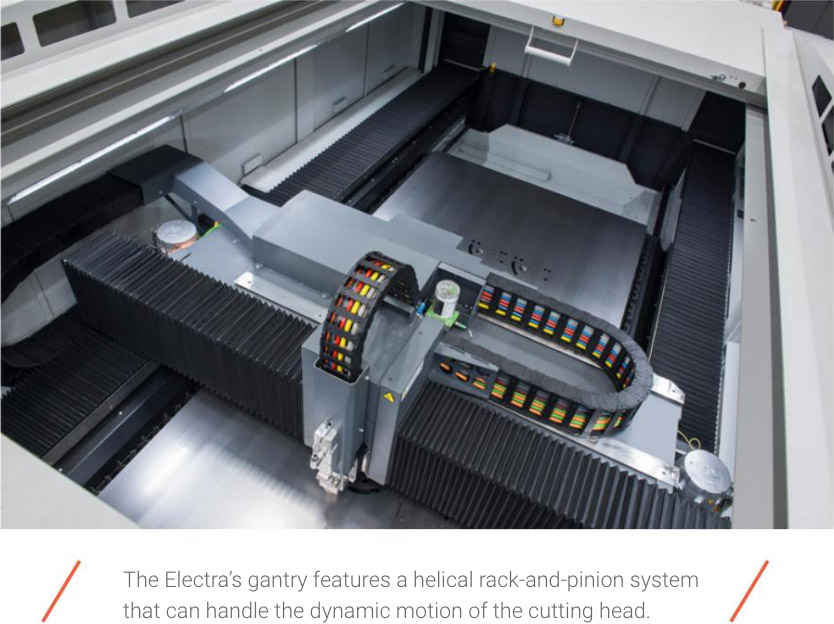 Considering how easily a laser can slice through metal, it should be of no surprise to learn that the design of the laser cutting head is critical in the overall success of a machine. If the cutting head can’t manage the massive amounts of power running through it, failures – and even fires – are inevitable.

“It’s challenging to deal with the power inside of the cutting head,” Colle explains. “LVD Strippit excels at building machines, but when it came to building a cutting head, we chose to work with the experts.”

Colle is referring to the experts at HighYag, a supplier of critical components for laser material processing. In 1995, the company opened its door in response to a surge in laser processing adoption and quickly made inroads with some of the world’s biggest automakers thanks to its innovative laser welding heads.

Within the cutting head, lenses and protective windows guide the laser to its desired cutting location, but along the way, other internal components conduct and absorb some of the laser’s energy. To combat that internal energy, the cutting head must be water cooled, which requires several cooling lines that have to fit into a fairly small design.

“The cutting heads of today are very sophisticated from a design standpoint,” Colle says. “Some machine builders have tried to design their own, and they’ve paid a high price. We can’t make that mistake, and so we’re proud to say how comfortable we are working with HighYag. They developed a beautiful cutting head that is capable of sustaining 10 kW. We’ve been using it for the past four years and will continue to do so.” 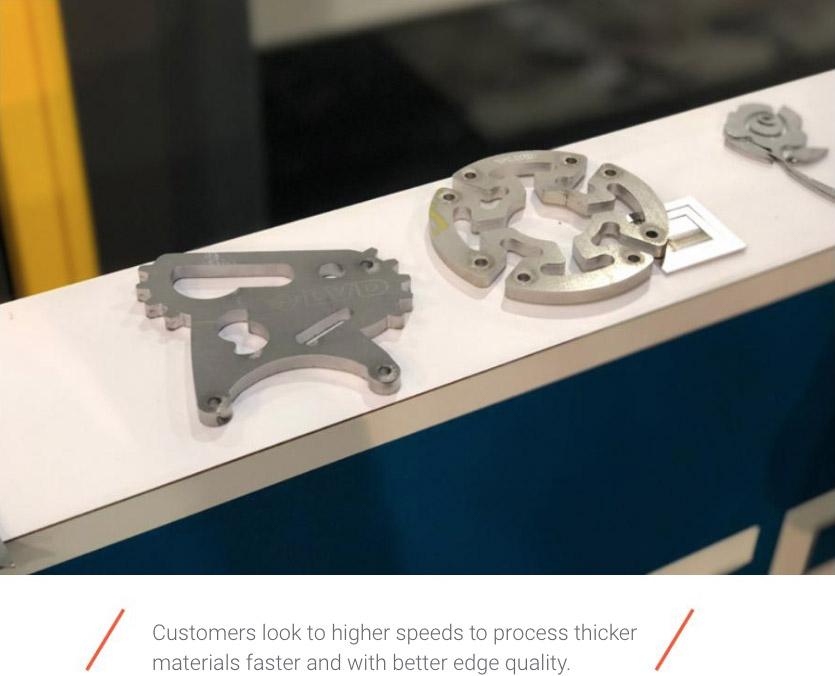 As the highly designed, lightweight cutting head takes quick, tight turns across a sheet of metal – up to 3,000 ipm depending on the machine and material – the gantry serves as another essential design component. It, too, must be designed with high dynamics and light weight in mind.

At LVD Strippit, the gantry – the bridge that holds the cutting head carriage – is cast in aluminum in a specific shape to prevent flexing. Two custom-designed servo motors with an integrated gearbox drive a helical rack-and-pinion system where the pinions are welded on the shafts of the gearboxes. When compared to a linear motor, the LVD Strippit design achieves nearly equal performance.

“We could have put linear motors on all of the axes, but that would have made it too expensive,” Colle explains. “Not wanting to price ourselves out of the market, we went with the combination of a helical rack-and-pinion system and a linear motor instead of linear motors alone.”

In doing so, LVD Strippit produced one of the fastest machines on the market that emits no backlash. Backlash, the familiar noise that can be heard when the cutting head changes directions, is the result of a machine that is, essentially, being worked too hard.

In addition to needing a gantry that can handle fiber’s high dynamics, the machine frame also plays a role in keeping the cutting head secure – even at maximum speeds.

“All of our fiber lasers have a heavy, rigid frame, especially the Electra, which weighs more than 30,000 lbs.,” says Colle. “In addition to being incredibly heavy – almost twice the weight of a CO2 machine – they all have a mono-frame construction, meaning they are machined as one piece.”

By machining the frame out of one solid piece of steel, the result is an extremely stiff piece of equipment that can absorb the resonance of the cutting head’s high speeds. If the frame can’t absorb that vibration, it inevitably shows up elsewhere in the machine, causing problems with accuracy and the overall longevity of the equipment.

“A challenge in producing the mono-frame construction is finding a machining center that’s big enough,” Colle explains. “Everything has to be machined, tapped and drilled in one setup in one pass. You would never see a reputable machine builder drilling or tapping holes in a machine frame after the fact because it would have a negative impact on accuracy.” 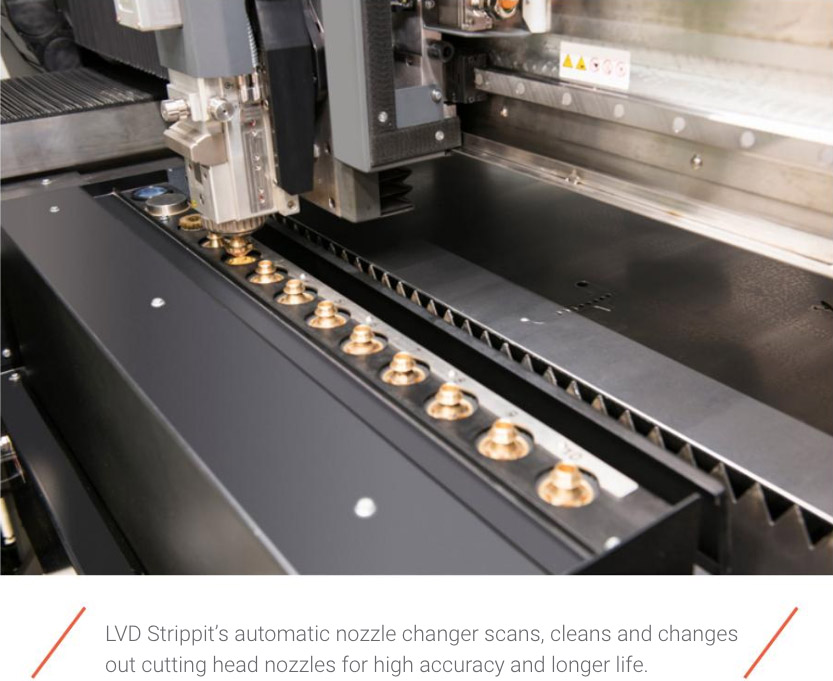 Cut to the quick

When LVD Strippit designed the Electra in 2013 – and after, as power levels continued to rise – further design changes were required, including those to the exhaust table located below the cutting area. The exhaust table is responsible for extracting all of the dust and smoke created during cutting, and it needed to be re-engineered and relocated.

“Usually, an exhaust table is placed directly below the cutting table and is designed as one large box with eight compartments,” Colle explains. “But, because the fiber laser is powerful enough to cut what’s underneath the cutting table, we had to reduce the number of compartments in the exhaust table to four to reduce the opportunities for the laser to come in contact with it.”

To achieve that, LVD Strippit had to increase the capacity of the motor in order to filter out more air. The number of filter cartridges also had to increase in the dust collector. Furthermore, the baffle systems had to be re-engineered and moved to the side of the machine.

Even before OEMs began pushing the power-level envelope, cutting tables had to be designed with the same slats that are still used today. The points found at the top of the slats keep power absorption to a minimum and provide minimal contact between the cutting table and the material. This keeps molten material buildup to a minimum and, therefore, reduces the chance for reflectivity to form burn spots on the bottom of the sheet metal.

“Considering the amount of time a laser beam is cutting directly over them, cutting tables take a beating,” Colle says. “After a certain amount of time, they basically run out of steel. Fortunately, that’s what tools like slat cleaners are for.”

Clearly, OEMs like LVD Strippit have thought of pretty much everything in order for customers to be able to leverage higher levels of power and better power sources. There are, however, a few things that customers need to do in their own facilities to ensure the best possible cutting conditions.

“With such a heavy machine that exhibits such high levels of acceleration, each machine must be anchored to the shop floor,” Colle explains. “A good rule of thumb for the 10 kW is to fortify floors to 10 in. thick. If the proper foundation isn’t in place, the machine could move when cutting at high speeds.”

Maintenance – while minimal compared to a CO2 – must also be taken seriously. And that includes lubricating critical components. Fortunately, LVD Strippit developed an automatic lubrication system that simplifies the process.

“Being diligent about lubrication wasn’t necessarily top of mind with CO2 because it wasn’t critical for driving the axes with a ballscrew setup or a regular rack-and-pinion gantry,” Colle says. “With the helical rack-and-pinion system and the extreme accelerations it achieves, we need to make sure that lubrication is taken care of. So we took care of that for customers.”

The LVD Strippit solution is based on a centralized grease cartridge that automatically lubricates all of the key components. The cartridges are automatically checked, and if they’re running low, customers receive an alert.

Undoubtedly, power levels are not expected to level off any time soon. But fortunately, the attention to detail that was placed on machine design early on gives fabricators and manufacturers the confidence they’ll need to leverage more power as it becomes available.