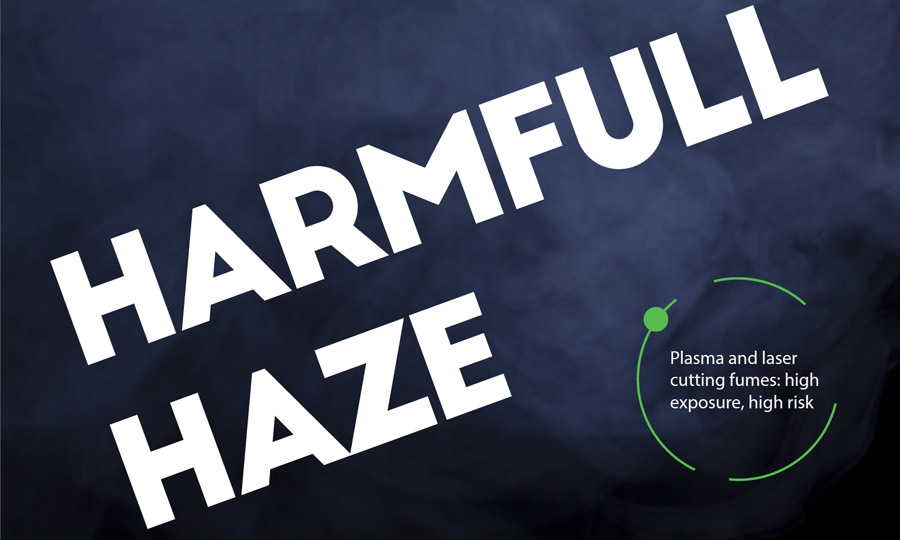 Plasma cutting is popular in metalworking industries for a reason. It’s fast, precise and relatively inexpensive. It doesn’t produce metal fragments and creates a clean edge. Laser cutting is also popular, especially for thinner sheet metal or where a very precise cut is needed.

But these processes heat the metals to very high temperatures, producing metal fumes, which can have immediate and long-term consequences for health. 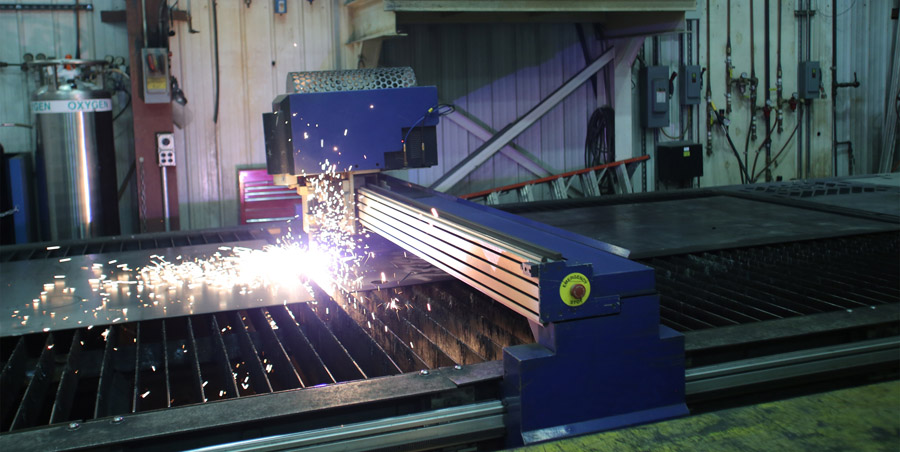 Downdraft cutting tables are designed to pull air downward and prevent fumes from escaping into the air.

Plasma and laser cutting fumes may contain many different metals and compounds. For companies that cut a variety of metals, each alloy will have a different composition. Also, the act of heating the metal to the temperatures involved in the cutting process forms dozens of oxidized compounds that can also be harmful when inhaled.

Immediate exposure to hexavalent chromium can cause skin sores. It can also irritate the eyes, nose and throat. Nosebleeds and red, itchy rashes can occur with repeated exposure.

The greatest concern, though, is that hexavalent chromium is known to cause cancer in those exposed to it. In 2006, OSHA decreased the acceptable limits of hexavalent chromium exposure. If the material being cut is a chromium-containing alloy, HEPA filters may be necessary to achieve compliance.

Nickel, another common metal in alloys, is also a known carcinogen. Besides causing cancer, it can also cause heart and kidney problems. Some people can develop a severe allergy to nickel, resulting in allergic reactions that can be dangerous. It can also cause infertility.

Manganese is another serious hazard. Its worst effect is brain and nervous system damage. Manganese exposure, which is most common in welders but also occurs with plasma and laser cutting, causes neurological damage. Symptoms resemble Parkinson’s disease with tremors, difficulty moving the arms and legs, and muscle stiffness. The damage is permanent.

Many other metals that may be found in fumes are dangerous. Beryllium, often used in aircraft parts and other lightweight metals, causes the fatal lung disease berylliosis.

Lead is a well-known poison. Cadmium and cobalt, found in small amounts in many industries, are also known to cause cancer. OSHA has urged companies to phase out the use of these two metals whenever possible. 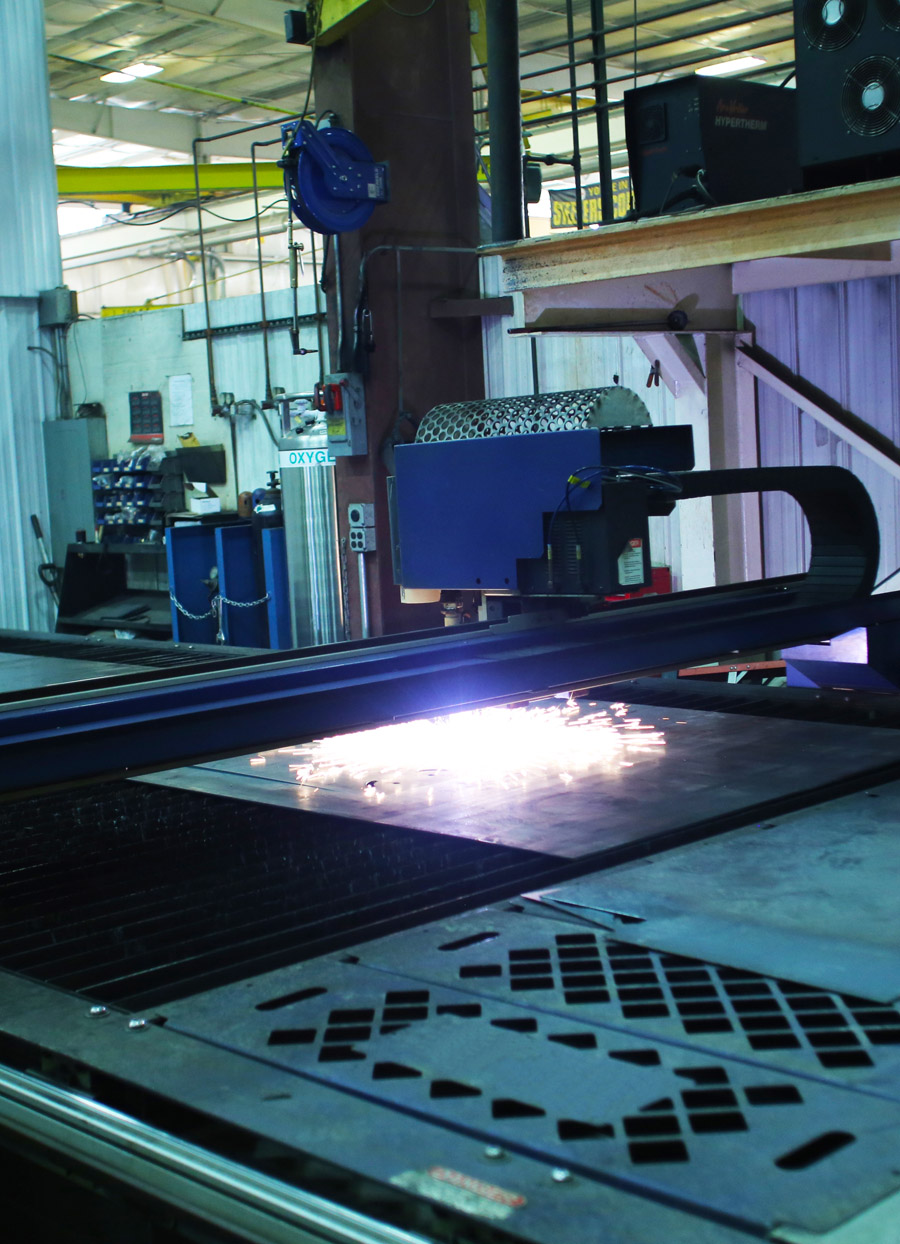 When plasma and laser cutting fumes aren’t properly removed from the air, measureable amounts of metals, such as hexavalent chromium, can build up in the bloodstream of those who are regularly exposed.

The most common effect is irritation of the eyes, nose and throat. These are the areas that are exposed as soon as the dust is inhaled. Red, burning eyes and dry, irritated or even bloody noses are common results. It’s also possible to become allergic to the components of the fumes.

Metal fume fever, linked to zinc fumes, is another common problem for anyone else exposed to metal fumes. Many metalworkers are familiar with the condition, and there are even home remedies (drinking lots of milk is rumored to help).

Metal fume fever is thought to be caused by the body releasing certain immune system chemicals in response to damage to the lungs. The signals released by the injured lungs tell the immune system there is a problem and to go into attack mode.

The result is a lot like fighting off a flu virus: headaches, chills, muscle aches and coughing. While metal fume fever typically is not dangerous and goes away on its own, it could mean that the metalworker is being exposed to other, worse things.

People exposed to metal fumes regularly are more likely to get infections such as pneumonia and bronchitis. Damaged lungs are easier for germs to infect.

Long-term exposure to metal fumes can cause fibrotic lung disease. This occurs when the lungs are damaged repeatedly over a long period of time. The small air sacs of the lungs begin to turn into scar tissue, and the lungs become stiffened and scarred.

The exposure can also cause chronic obstructive pulmonary disease (COPD), which causes people to be short of breath, struggle to breathe and sometimes need supplemental oxygen. Controlling exposure to metal fumes can help prevent these conditions, but once they happen there is no cure.

According to research, metal fumes don’t just damage the lungs.

Plasma and laser cutting produce particles small enough to be absorbed into the body through the lungs. People exposed to excessive amounts of fumes can have measurable amounts of these metals in their blood. Many metals stay in the body for a long time. This means that a person who breathes these fumes every day will have high levels built up in their blood.

The kidneys are the organs that remove waste materials from the body. Metals, especially hexavalent chromium and cadmium, are toxic to the kidneys. People with high levels can have damage to their kidneys similar to what occurs in the lungs. The injured kidneys form fibrous scar tissue that impairs their function. This is usually found in people with very high exposure levels, but people who are already at risk of poor kidney function should not take this risk.

Metal fumes have also been found to cause cardiovascular disease. People regularly exposed to metal fumes in jobs like welding and plasma and laser cutting have a higher risk of strokes, heart attacks and coronary artery disease. Because many people already have risk factors for cardiovascular disease (obesity, smoking, high cholesterol), it is dangerous to allow exposure to metal fumes. 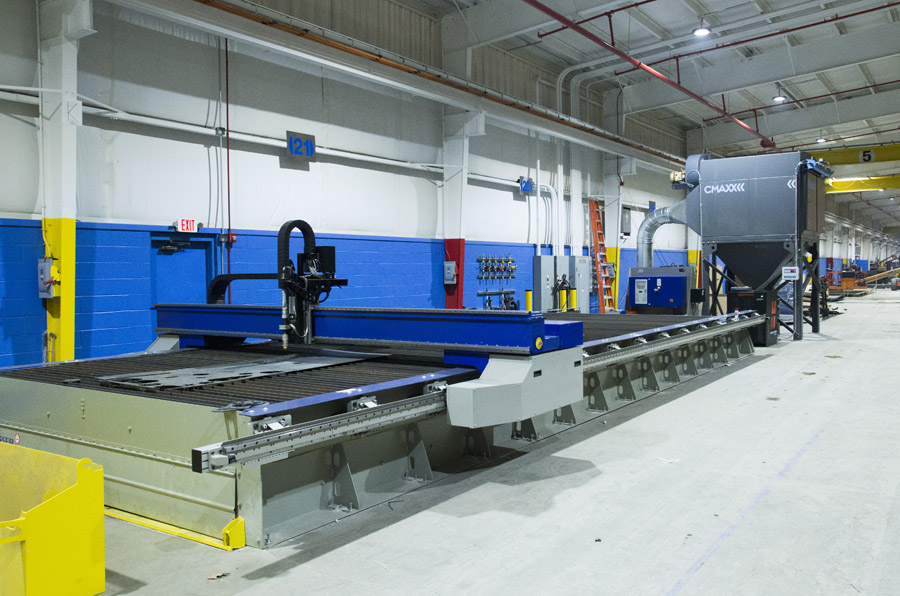 Because of the various metals being cut in fabrication and manufacturing settings, fumes can contain a variety of metals and compounds.

To manage the risk associated with hazardous metal fumes, plasma and laser cutting tables need to be equipped with a fume extraction system. General ventilation, however, is not typically enough to prevent dangerous levels as fumes can spread through the entire work area. In areas where cutting is being done without proper fume control, it’s often possible to see a visible haze of metal particles in the air.

The ideal method of control is to use a downdraft cutting table. These tables are designed with an airflow that pulls air downward. This prevents the fumes from rising away from the cutting surface and escaping into the rest of the area.

Many downdraft tables are designed with partitions so that the air is only being pulled through the sections of the table where the cutting head is active. This improves efficiency and allows more airflow to the areas where it is needed.

A downdraft table is typically connected to a dust and fume collection system. These systems can be built into the table design, but they can also be separate from the table with dirty air transported through ductwork and clean air either returned to the facility or vented outside. Plasma and laser cutting fumes cannot be vented directly outside without being filtered, however, because they contain toxic metals. 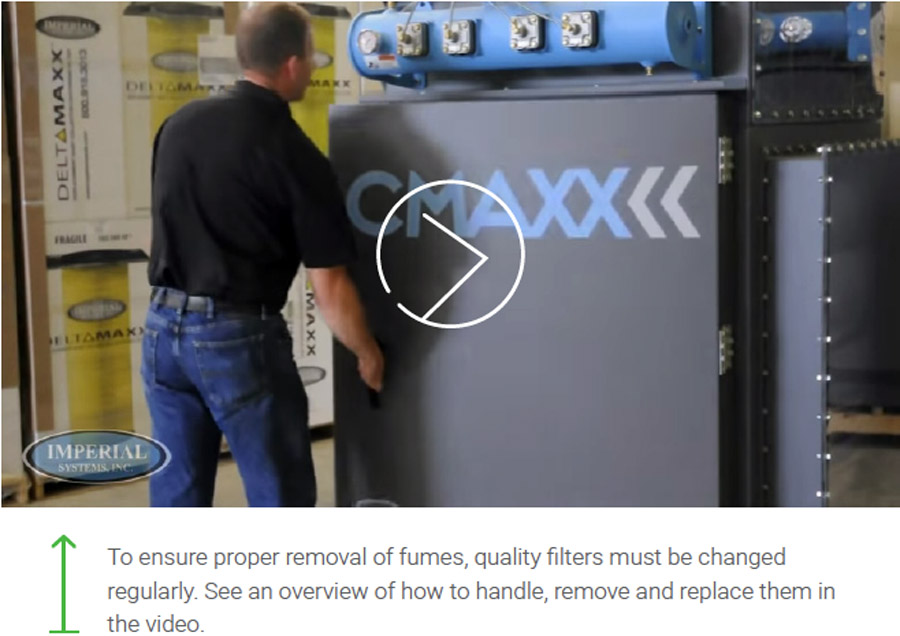 To ensure proper removal of fumes, quality filters must be changed regularly. Air being returned to or vented inside the facility must be filtered as well. It is recommended that filters used in these collectors be rated MERV 15. This means that they are efficient at capturing particles as small as 0.5 microns, which is efficient enough to capture the small particles in plasma and laser cutting fumes.

If questions arise about the fumes from a particular process, use an independent testing company to do an assessment. These companies can determine the size of the particulate in the fumes and how combustible the material is. An independent testing company is recommended for this analysis; testing provided by companies who manufacture their own dust and fume collectors may not be unbiased.