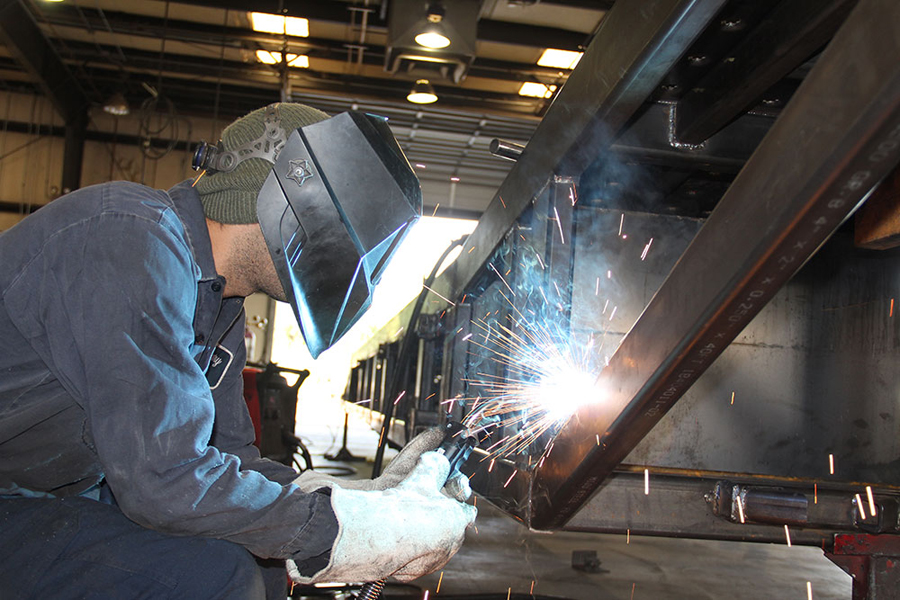 The technical experts at Tweco, an ESAB brand, talk with hundreds of customers about how to get the best performance out of their equipment. The following 12 troubleshooting, maintenance and repair tips answer some of the more frequent questions they receive.

Before spending time troubleshooting, first see if you selected the right shielding gas type. This sounds basic, but we see it all the time. Next, check the gas flow rate. Too high of a flow rate can lead to porosity. Where 30 cubic ft. per hour provides smooth, laminar flow and good coverage of the weld puddle, 40 cubic ft. per hour may create turbulence and can pull in the surrounding atmosphere.

All MIG gun nozzles eventually become loose from wear (not to mention being used as a chipping hammer). When the nozzle slips, it can pull the surrounding air into the shielding gas stream and contaminate it. Also, a deformed nozzle orifice won’t properly direct gas flow. For the nozzle to provide smooth, laminar gas flow, keep it in good condition and free from spatter buildup.

Go with the flow

If the MIG gun consumables are too small for the application, they become hot quickly. As the gas contacts hot surfaces, it wants to expand but remains constricted by the nozzle. Then, as the hot gas exits the nozzle, it expands rapidly and further impacts gas flow.

If the front-end gun consumables become too hot, they are probably under-sized for the application. The solution is to use a larger gun with more heat dissipation capabilities or change from an air- to a water-cooled gun.

Also, note that cone nozzles do not provide better control of the gas flow. Only use a cone nozzle for access to deep V-grooves and tight corners. Otherwise, stick to a standard nozzle. Because a cone nozzle constricts the shielding gas, its flow covers a smaller curtain of gas around the arc. Sometimes a welder may turn up the flow to get more gas coverage; however, this may make the flow more turbulent.

Different wire varieties may require more or less preheating of the wire before it touches the workpiece. More stickout requires a larger curtain of gas coverage, which becomes more difficult to control as you move further from the nozzle opening. So, if an application requires more stickout, beyond say 1/2 to 3/4 in., a recessed or double-recessed nozzle might be employed to assure better gas coverage.

Ultimately, stickout becomes a function of the wire feed speed, wire, gas and power supply settings. Also, welder preferences can drive stickout because it is often easier to see the arc while welding. Finally, the position of the weld and workpiece create access issues and impact the bead formation, which need further consideration when selecting nozzle type.

When MIG welding, wire shavings eventually build up, clogging the MIG gun liner and causing the wire to stick or slip. When the wire starts to slip, a welder’s first tendency might be to increase drive roll tension. Unfortunately, the number one cause of wire shavings is over-tensioning drive rolls. When crushed, surface shavings and fine particles break off at a much higher rate.

Instead of cranking down on the tension knob, clean the gun liner. Generally, blow out the liner using compressed air every time you install a new roll of wire, and more frequently, if necessary (perhaps at the start of each shift in high-volume operations). Also, before testing new MIG consumables, filler metals, power sources or wire feeders, start with a clean gun or new liner to ensure an “apples to apples” comparison.

Worn or kinked gun liners create excess wire drag, resulting in an erratic arc. Premium brand gun liners last longer, but even those might need to be replaced more frequently than you think. For example, the Tweco test lab found that when running a 1/16-in. solid wire, it typically replaces the liner after two 60-lb. spools.

If you trim a gun liner too short, the wire will feed without any support, start feeding erratically and possibly create micro-arcing inside the conductor tube. Always follow the liner manufacturer’s recommendations for trim length and cut carefully. Note that different contact tip styles can require different trim lengths. For example, a standard tip might require trimming at 10 mm, where an extended tip might require a 30-mm trim.

When trimming a new gun liner, use sharp, premium quality cutters (not whelpers!) to avoid creating a sharp edge that could produce metal shavings. Should the cut liner have a burr, use a hand file to remove it.

Gun handles and triggers usually sustain permanent damage before they wear out. Fortunately, replacing them takes just a few minutes and some basic tools.

If the entire front end of the gun needs to be replaced, you will need to separate the gun from the Cablehoz and then reconnect the new front end. The ease of replacement depends on the type of connection between the front end and the Cablehoz. Connections that use a brass block and set screws (such as on the Tweco Classic series) make it easy to replace the front end because you simply loosen the screws and pull the two pieces apart. Connections with a mechanical crimp (such as on the Tweco Spray Master series) are harder because they require a specialized die and crimper or an arbor press to make a reliable connection.

Many people view MIG gun consumables as a commodity. As a result, they purchase low-grade generic knockoffs from the lowest cost supplier. However, take a moment to consider the two most fundamental purposes of the consumables: to transfer electricity to the wire and direct shielding gas so that it covers the weld pool. All consumables perform these functions, but at vastly different levels of effectiveness, which manifests itself in ways such as contact tip life, arc stability and weld quality.

Note that the elemental composition and grain structure of a metal directly affects its electrical and thermal conductivity, as do a part’s design and machining tolerances. Consumables with premium performance command a premium purchase price. However, because they last longer, they reduce overall welding costs.

In end-user surveys, welders consistently said that simpler is better because there are fewer parts to stock and fewer components to repair. As a result, MIG gun consumables have evolved, such as with the invention of drop-in, non-threaded contact tips and tip designs with shielding gas ports that eliminate the diffuser and the number of threaded connections. While these consumables command a premium price, they can last three to eight times longer (or more), providing a quick return on investment because the welder is spending more time making parts as opposed to changing tips.