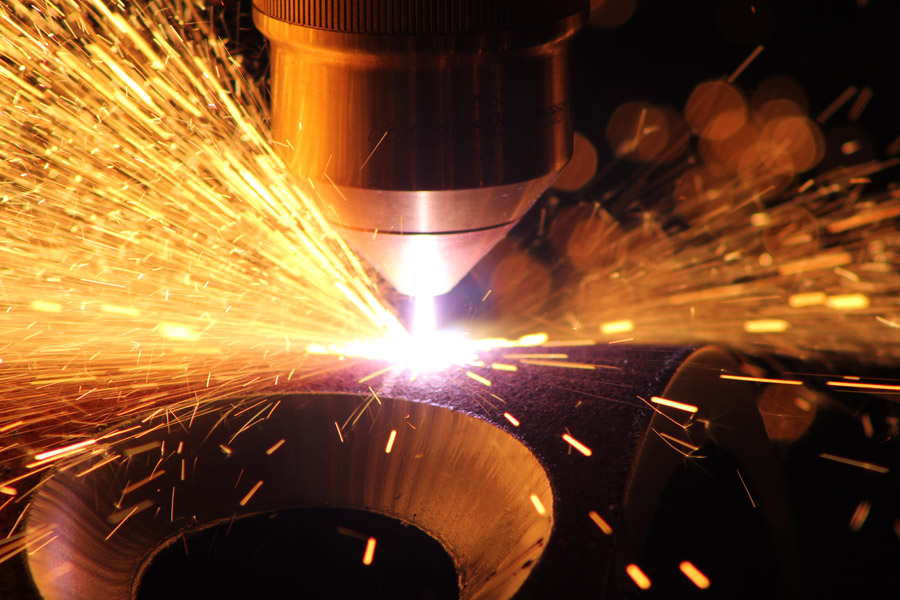 Jim Colt believes he was the 11th employee hired by Hypertherm, a New Hampshire-based company that has become synonymous with industry-leading cutting solutions. Since coming on board in the late 1970s, he’s been there for all but 10 of the company’s 50 years, which is being celebrated this year.

“It looked like a cool place to work,” says Colt of his reason for taking the job in assembly. He’s since had just about every job possible with the company and is now the applications and technology manager. “Everybody is like family. I think that’s what has kept me here all these years.”

Colt recounts the early days, when on the last Friday of each month, every employee showed up to package the units the company sold that month and readied them for shipping. They’d build the crates, fill them with product and lift them by hand into a truck for transport. After the work was done, it wasn’t unusual for someone to run up the street to grab some beer and table tennis matches ensued well into the night.

“If a spouse wanted to find us,” Colt says, “they knew where to look.”

Years later, the company has since gone international. While there is no cattle call for every employee to assist with building crates and packaging equipment and the headquarters no longer double as an after-hours entertainment facility – the focus on commitment to employees and quality products remains. 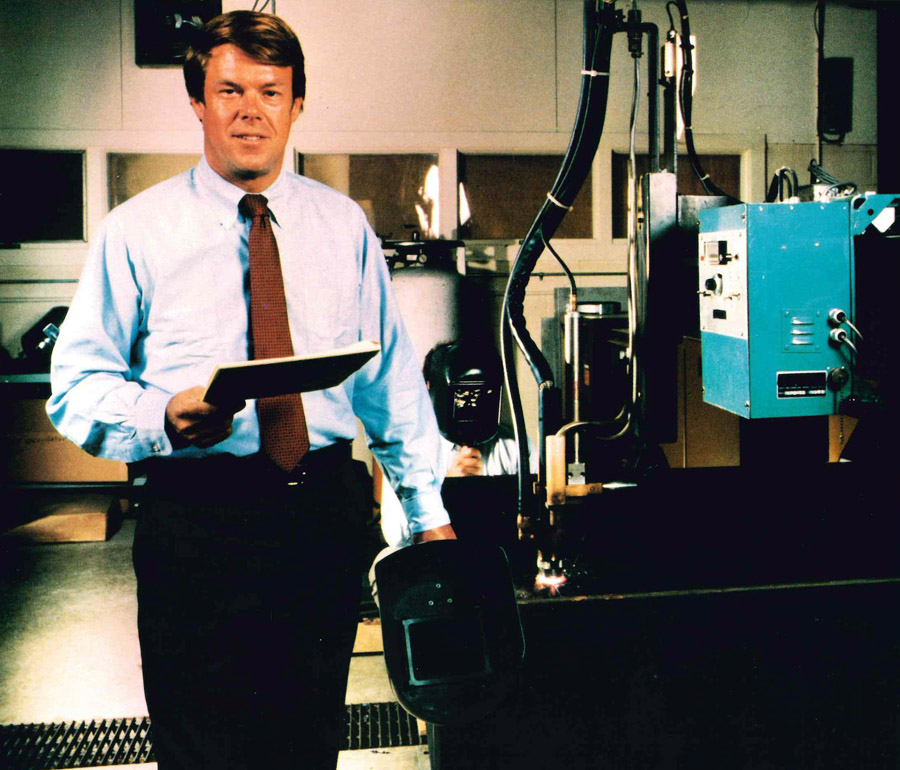 Without the revolutionary advancements made possible by Dick Couch, the founder of Hypertherm, plasma cutting would not be the same successful fabricating method the industry knows today.

Hypertherm was the brainchild of Dick Couch, a Dartmouth College engineering graduate, and his professor, Bob Dean. Fresh out of school in 1965 and with an innovative approach to plasma cutting they had developed, Couch and Dean were tasked with taking a laboratory idea and a piece of equipment operated by technicians and turning it into a piece of machinery that could be reliably used on a manufacturing floor where the environment was tough and the plasma cutter needed to be tougher.

“We underestimated the amount of work that was required,” says Couch, who had never even been involved in manufacturing. Yet with a sense of naiveté coupled with complete confidence in his idea, the two kept at it. “I was unmarried at the time. What did I have to lose?” 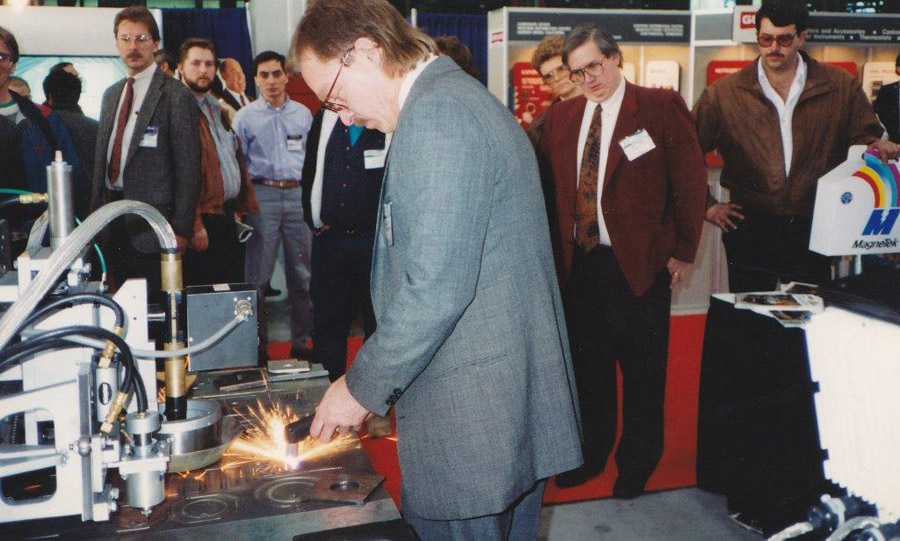 Jim Colt has been with Hypertherm for 40 of the company’s 50 years. He’s shown here in the 1980s demonstrating a cutting torch.

Couch was convinced the technology and business he pursued was worth the time and effort, but without “great rational analysis of the pros and cons.” However, he had his own money in it, so he was completely invested.

Couch marvels at how the startups of today go from being valued at zero dollars to being valued at a billion dollars in three or four short years, because Hypertherm’s first profits didn’t roll in until eight years after the company was founded. However, as business began to ramp up and move out of a two-car garage to an actual production facility, he had little time to sit back and think about how far he could take the company.

“The main goal during the first years was just survival,” Couch recalls. “Underfinanced and paying for materials and equipment … we really didn’t have time to think of anything except meeting payroll every two weeks.” 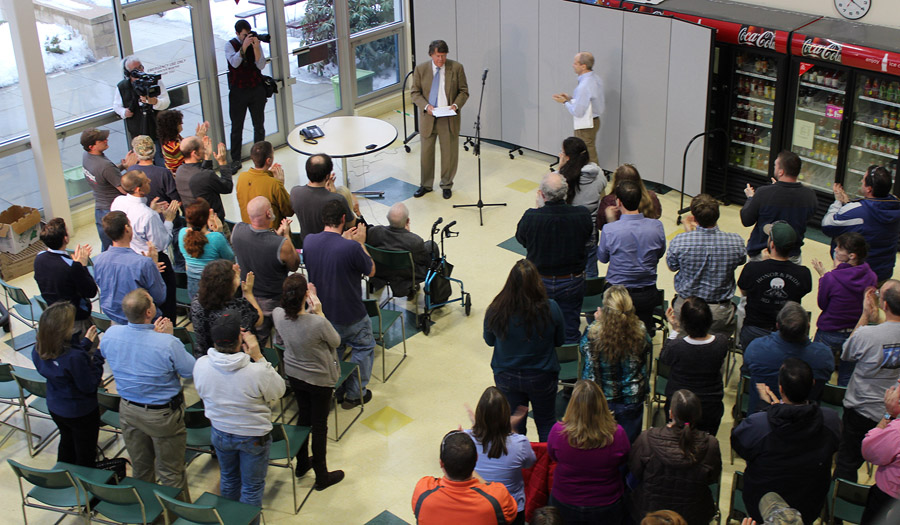 Dick Couch, Hypertherm’s founder, announced in 2013 that the company would be 100 percent employee owned.

It’s not surprising to hear Couch mention that making payroll was one of his biggest concerns early on, not just because it’s impossible to grow a company without employees, but because Hypertherm is now 100 percent employee owned.

Couch never coveted his business or the profits. In fact, when those first profits were earned in 1976, Couch didn’t hesitate to share with the employees, or as the company calls them, the “Associates of Hypertherm.”

“It just seemed to be the fair thing to do,” he says. “I’ve seen so many companies where everybody in the company works very hard, but then it’s the top three or four people who share in the profits. That didn’t seem fair to me.”

The egalitarianism is evident even in how the parking lot is laid out. There aren’t dedicated spots for the top executives or management in the lot – those who get there early get the closest space.

“Get here late and you park way in the back,” Couch says.

He made the decision to not only share profits, but to also share the company with his employees in 2001, offering up a 30 percent ownership plan. In 2013, the company became 100 percent employee owned.

The exact opposite of an employee stock owned plan is the route often taken by many business owners, who work decades to build up their brand and then sell it to the highest bidder.

“That’s an example in my mind where the owner does extremely well and takes a nice payday check,” Couch says, “but the rank and file plant worker and even other management team members may not get much of a reward.”

Couch mentions another common scenario today is where a company is acquired and the new owner cuts back on benefits and sometimes thins down the payroll.

“I’ve seen companies physically move the company and all those things,” he says. “It’s hard on the employees. So my wife Barbara and I thought the employee ownership was just a continuation of the shared reward. It’s worked very well so far.”

Evan Smith has been with Hypertherm since 1992 and became the CEO in 2015. He says that companies that succeed can usually point to company culture as the reason, which is what he believes is going on with Hypertherm as it continues to grow into areas beyond plasma cutting. He says the biggest benefit to being an employee owned company is continuity – the ability for something that has been built with a long-term vision to sustain that vision and remain focused on company culture.

“Hypertherm has always been a people-focused business,” Smith says, adding that the company has always had a no-layoff policy. “Clearly going with an employee stock ownership plan reinforces and strengthens all of that and takes it to a new level, but allows it to be done in the long term rather than just the lifespan of the founders.”

When Smith joined Hypertherm, the company had a few hundred employees and was making an estimated $35 million in sales per year. He says the reputation of the company in the early 1990s was as an “up and coming” industrial organization and that Couch was considered an innovator and visionary.

“Hypertherm moved to being a dynamic growth company,” he says, adding that they’ve gone through a few different growth spurts since he joined the team.

The technology behind the company’s products continued to improve, pushing an expansion of their product line in the 1990s, Smith says. 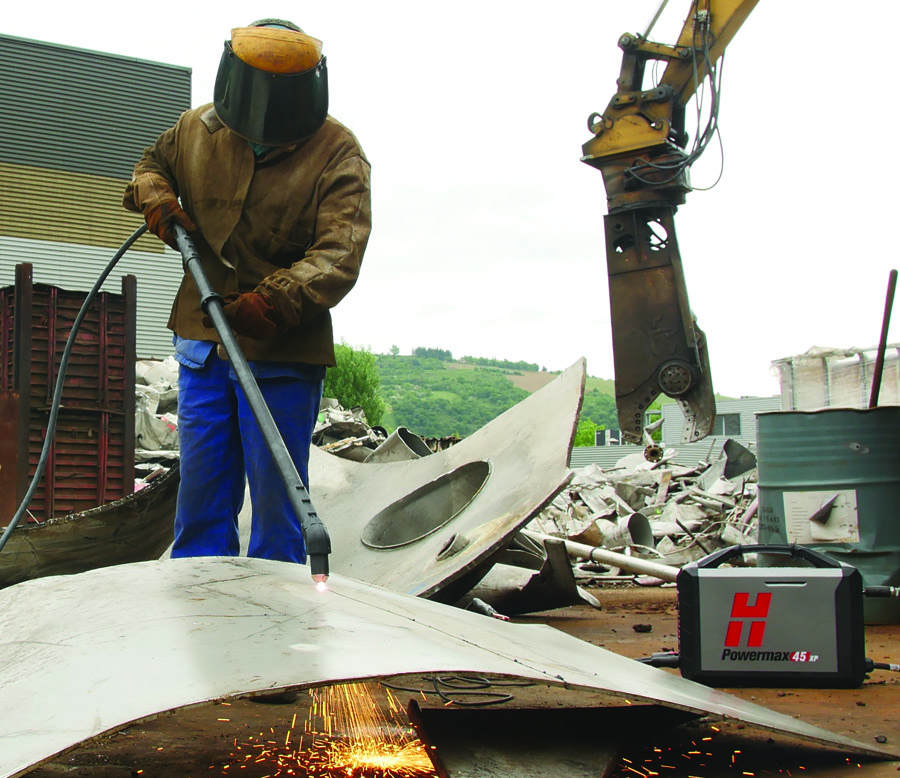 From long torches to cutting technology placed on robots, Hypertherm has developed cutting solutions for just about any application.

“Just as I was arriving, the company rolled out some key new technology platforms,” Smith recalls. “One was high-definition plasma, which made plasma cutting a lot more precise by allowing it to do finer feature work and improve the cut tolerances.”

At the same time, Smith says, they were coming out with long life oxygen technology that really gave their brand a boost.

“Oxygen cutting had been around since the early 1980s,” he notes. “It had real benefits in terms of improving mild steel cut quality and speed, but came at the tradeoff of reducing consumable life. So long life technology was a breakthrough that significantly improved the consumable life in oxygen cutting and the economics for oxygen cutting.”

Globalization of the company in the 2000s offered another jump in growth.

Hypertherm is no longer a company focused solely on plasma cutting. They’ve applied their engineering resources to improving products like waterjet systems, CNC systems, height controllers, and CAD/CAM and robotic software. In addition, the company leads the way when it comes to torch and consumable options for Hypertherm and non-Hypertherm plasma, laser and waterjet systems.

“We think pretty expansively about the skillset we’ve developed and how we might help our customers around the world with cutting different materials and cutting with different technologies that have different performance and economic tradeoffs,” Smith says. “Oftentimes, the applications involve harnessing or leveraging software and control capabilities. So those are the main dimensions of our continued expansion – not just the cutting process itself.” 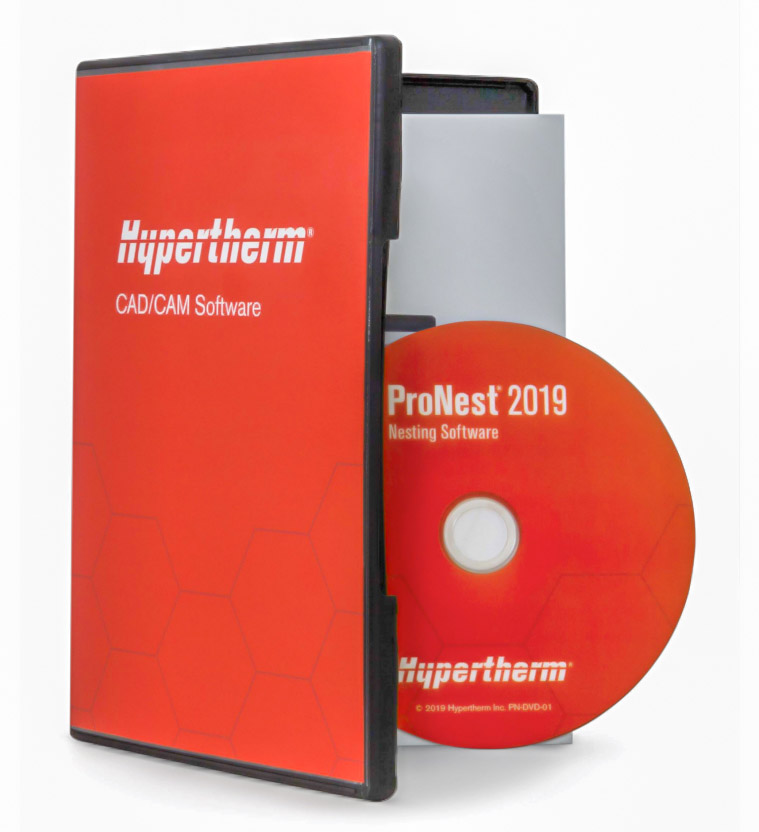 Long known as an expert in plasma cutting technology, Hypertherm has branched out into a number of other areas, including waterjet, CNCs and CAD/CAM software.

That’s Couch’s response when asked if he ever imagined as a young and eager engineer that he could take a company where it is today, a half century later.

“Fifty years later – we’re certainly far from anything I was thinking,” Couch says. “I really thought it would be something I would do for a few years. It took a lot longer to make major improvements in cutting than I thought it was going to take, but we’re still making the equipment better 50 years later.” 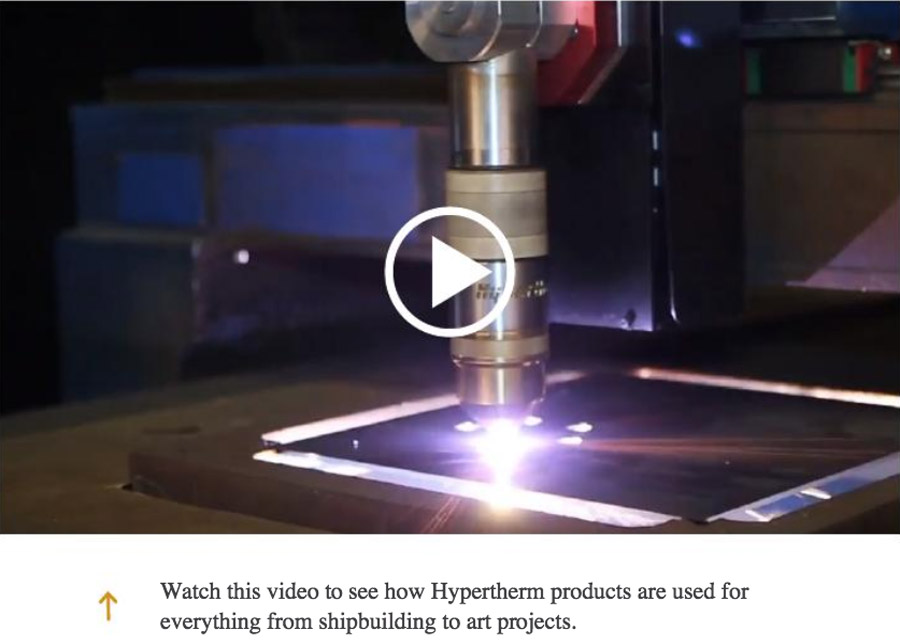 Smith says he and Dick and his wife will embark on a world tour this year to the company’s major regional headquarter locations in Asia, South America and Europe. They’ll obviously tie the milestone in with various marketing efforts, but they’ll also close their operations in the United States for a day and celebrate with employees with the Dick and Barbara as the “guests of honor,” so to speak, as both are still involved with the company, though not day-to-day operations.

Smith says that moving forward, they’ll preserve the founding values that persist within the company and “reinforce our long-term stability and vision. Our intention is to keep it going for another 50-plus years.”

As for Couch, his vision is for the company to continue to be owned and managed by employees.

“Staying true to the founding values of the company – that’s my hope,” Couch says. “We have a good group of people running the company now. I have a high degree of confidence for the future of the company.”