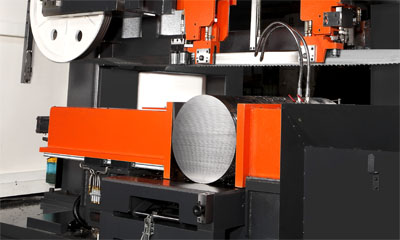 Carbide blades used in bandsaws are expensive compared to bi-metal blades, but the return on investment is worth it – until it isn’t. Without the right environment, carbide blades can rapidly depreciate, become stuck in the material they’re cutting or just snap in half. When that happens, there goes the investment in the blade as well as the expensive material being cut.

Cosen Saws began a two-year research and development phase in 2012, working toward meeting the challenge of making a sawing machine that delivered the best environment for carbide cutting. The research and development during this period included engineers at National Formosa University in Taiwan, and it resulted in the production of the CNC-430 and CNC-530 programmable automatic bandsaws.

As demand for carbide blades takes an upswing, Cosen is poised to offer a solution that marries automation, fine adjustments, performance reports, notifications and a platform for customers to comfortably move into the carbide cutting environment.

The price tag on carbide blades has put the product on a high shelf and out of reach for many manufacturers, especially those with saws that are prone to vibration, which can damage carbide blades. However, Peng Huang, president of Cosen Saws, says the development of carbide blades is becoming more versatile, giving manufacturers working with common materials (not exclusively hard materials, such as Inconel or titanium) more incentive to jump into the carbide market.

“In the last decade,” Huang begins, “carbide cutting technology for bandsaw blades has gained ground in terms of how it is no longer just for hard material. It has become more versatile and more affordable. The blades are still expensive, for sure, compared to bi-metal, but the way the carbide blade is constructed justifies the cost because of the time savings.”

Improving the rate at which saws cut through materials is becoming a hot topic for manufacturers, says Huang.

Huang says there is a renewed focus on inventory. Manufacturers don’t want materials sitting idle in the warehouse. They want a shorter turnaround time on processing a variety of different types of materials, from hard tooling metals to plastics, in some cases.

“All of that is giving way to carbide sawing,” Huang says. “The producers of carbide blades realize that in order to push the technology, they have to be versatile. They can’t be pigeonholed into making blades for just one material, and they can’t just look at Inconel.”

Manufacturers looking closely at cost per cut are realizing it makes sense to go with carbide blades. Some will actually see the same cost per cut with carbide as they would with bi-metal, but they gain the advantage of saving time with the speed at which carbide can chew through material.

Unfortunately, manufacturers pairing their new carbide blades with the wrong saw aren’t seeing much of an advantage. Some manufacturers are unaware of the mismatch and so they aren’t doing anything to improve the situation. For example, if their machines are old and not equipped to reduce vibration, it can be a carbide killer.

However, part of the reason carbide is becoming a more popular option is because sawing machine manufacturers are figuring this out and building better saws that can match the technology put into carbide blades.
A number of manufacturers still develop products that are great for a specific type of blade, but this can be limiting for a customer that needs to switch from bi-metal to carbide or vice versa.
Cosen developed the CNC-430 and CNC-530 sawing systems for cutting hard materials in round, square and rectangle configurations. While the systems can use a variety of blades for many different types of material, the goal in developing these saws was to make them the perfect environment for running carbide blades.

Both models feature an automatic break-in for new carbide blades, which is an important process in regard to the life of the blade. Users can also customize the built-in feature to match their desired parameters for breaking in new blades. In an ordinary bandsaw, Huang explains, the operator must sit and count the cuts and turn dials while monitoring every aspect of the operation. The Cosen saw’s process is fully automated.

Similar to saws from other manufacturers, Cosen’s 430 and 530 bandsaws have carbide guides and vibration rollers. What’s unique about these models is that the automation can control what’s going on while the blade is in the material. When a blade can’t handle the material it’s cutting, it has a tendency to go sideways. Cosen engineered an automated feature for slow entry and exit that prevents an abrupt break-out or break-in, which impacts the quality of the cut and the blade itself.

Easy for the Operator

No matter the type of material being cut or the type of blade in place, manufacturers must focus on making saws that don’t require a lengthy apprenticeship to master them. Cosen knows the operators using its saws come from many backgrounds, some who are highly skilled and experienced and others who are essentially rookies in manufacturing. Cosen doesn’t cut corners on even the most basic things, such as installing large touchscreens on the saws that are easy to see and use.

Furthermore, Cosen ensures there is no guesswork for operators when it comes to feed and speed rates. When working with a CNC-430 or CNC-530, the operator simply enters the type of material being fed to the saw and the software automatically configures the rates.

“We believe in open platform and input options,” Huang says, noting that some manufacturers don’t provide the feed and speed rates on the control screen whereas Cosen does.

Cosen’s software does allow operators to tweak the automated feed and speed rates because blade life might not be as important in one application as it is in another. Operators, therefore, are allowed some leeway to increase the speed of the cut at the expense of blade life.

The software also comes equipped with a feature called “my favorite cut,” which offers fast access to the most frequently referred to jobs and their associated feed and speed rates. The operator can jump to these favorites with a push of the button.

“The producers of carbide blades realize that in order to push the technology, they have to be versatile.”
Peng Huang, president, Cosen Saws

If It Ain’t Broke

“Stainless is among the hardest materials to cut,” Huang says. “It makes a high-pitched noise and that is caused by vibration. Nether high nor low-pitched vibration is good for blade life. With Cosen’s technology, cutting stainless is quiet. You don’t get that high-pitched noise because we are able to break that pattern.”

“Carbide cutting technology for bandsaw blades has gained ground in terms of how it is no longer just for hard material.”
Peng Huang, president, Cosen Saws

According to Huang, the saw blade has three major tasks it needs to do: First, run at the appropriate speed; second, carry the necessary torque to penetrate the material and generate chips; and third, maintain straightness and never go beyond a set deviation. Cosen has developed a deviation detector that lets the user know (through its Mechalogix reporting software) when the blade has deviated beyond acceptable limits.

“Our proprietary algorithm can analyze the signal coming from an imbedded sensor,” Huang explains.

These sensors monitor a number of situations. For example, as a blade wears, it has a harder time generating the appropriate chip load, which causes the motor to draw more amperage, thus triggering a sensor. Furthermore, sensors detect when a blade has broken or become stuck in material, triggering an automatic stop function.

Huang says one of the biggest pain points for a manufacturer cutting expensive material is having the blade stuck in the material. That usually involves breaking the blade to get it out.

“It happens all the time,” he says. “Unfortunately, the cut that the blade was broken in is not a cut you can go back into. The reason is that you probably have carbide teeth that are broken inside and imbedded in the material. Carbide cannot cut carbide. That’s why it’s one of the biggest pain points. You lose time and material. If it can be prevented, then at all costs, you would like to prevent it.” 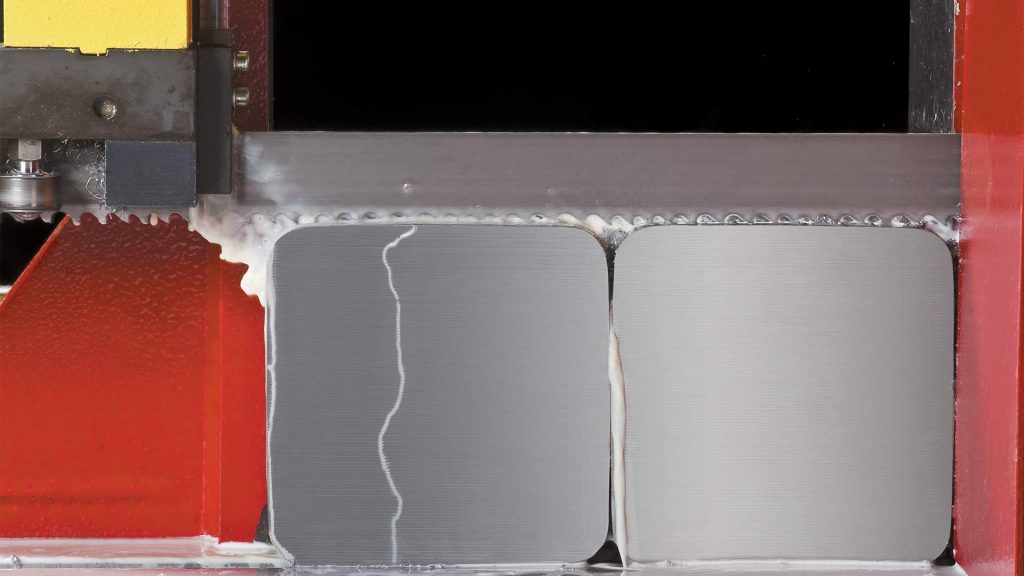 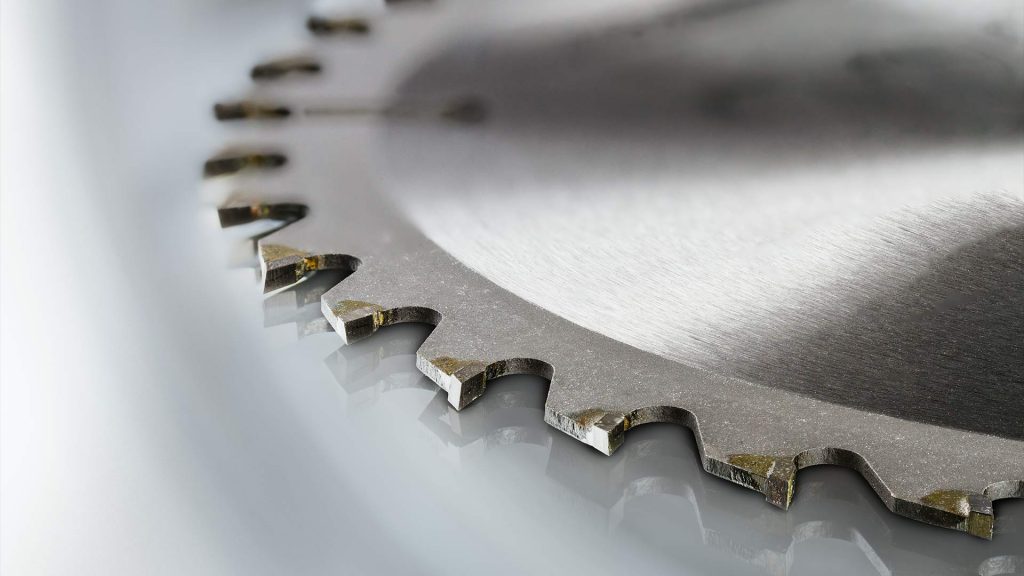