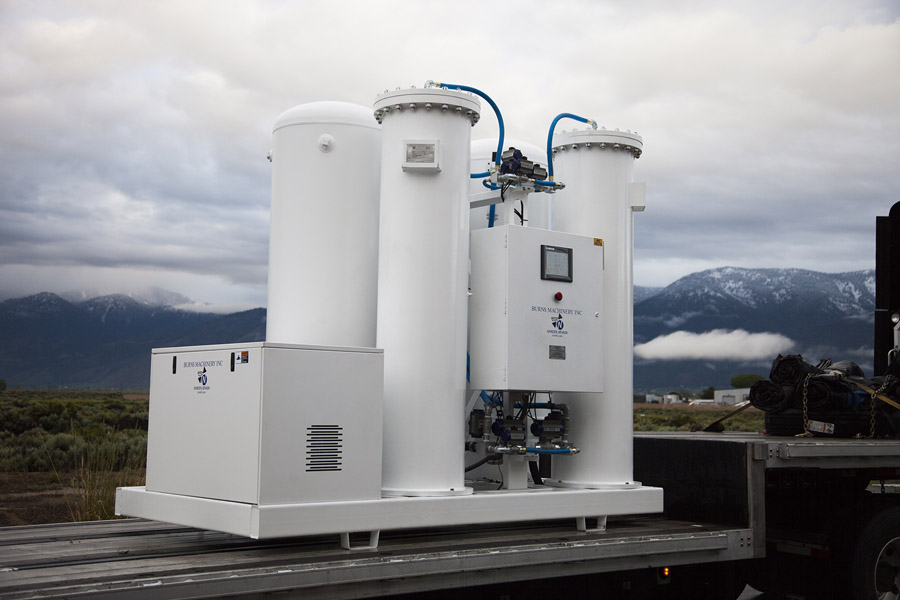 Are you using nitrogen gas for your laser cutting operations? If not, should you be? The answer is clear: it depends. If you’re getting adequate edge quality with compressed air, keep on blasting. If you’re cutting 1/2-in.-thick aluminum on your CO2 laser, an oxygen assist might be the best choice. And if you have a low-power laser that can’t take advantage of the performance boost made possible with nitrogen, stop reading and get back to work.

But assuming you have the wattage to take advantage of it, nitrogen can increase cutting speeds by three to four times or more in most thin-gauge materials. It also produces less heat distortion and dross, and it eliminates problems with secondary operations, such as painting and powdercoat on carbon steels.

Okay, fine. Maybe you would use nitrogen – or at least use it more often – but you get a stomachache whenever the gas provider’s truck rolls into the parking lot.

Greg Burns once did. As president of Burns Machinery Inc., he’s big into ring mill manufacturing and production of high-performance motorcycle sprockets, but when he bought his first fiber laser in 2014, he quickly learned just how expensive this inert gas can be. At one point, the shop was dishing out more than $20,000 a month for bottled nitrogen. Unsurprisingly, Burns decided to do something about it. 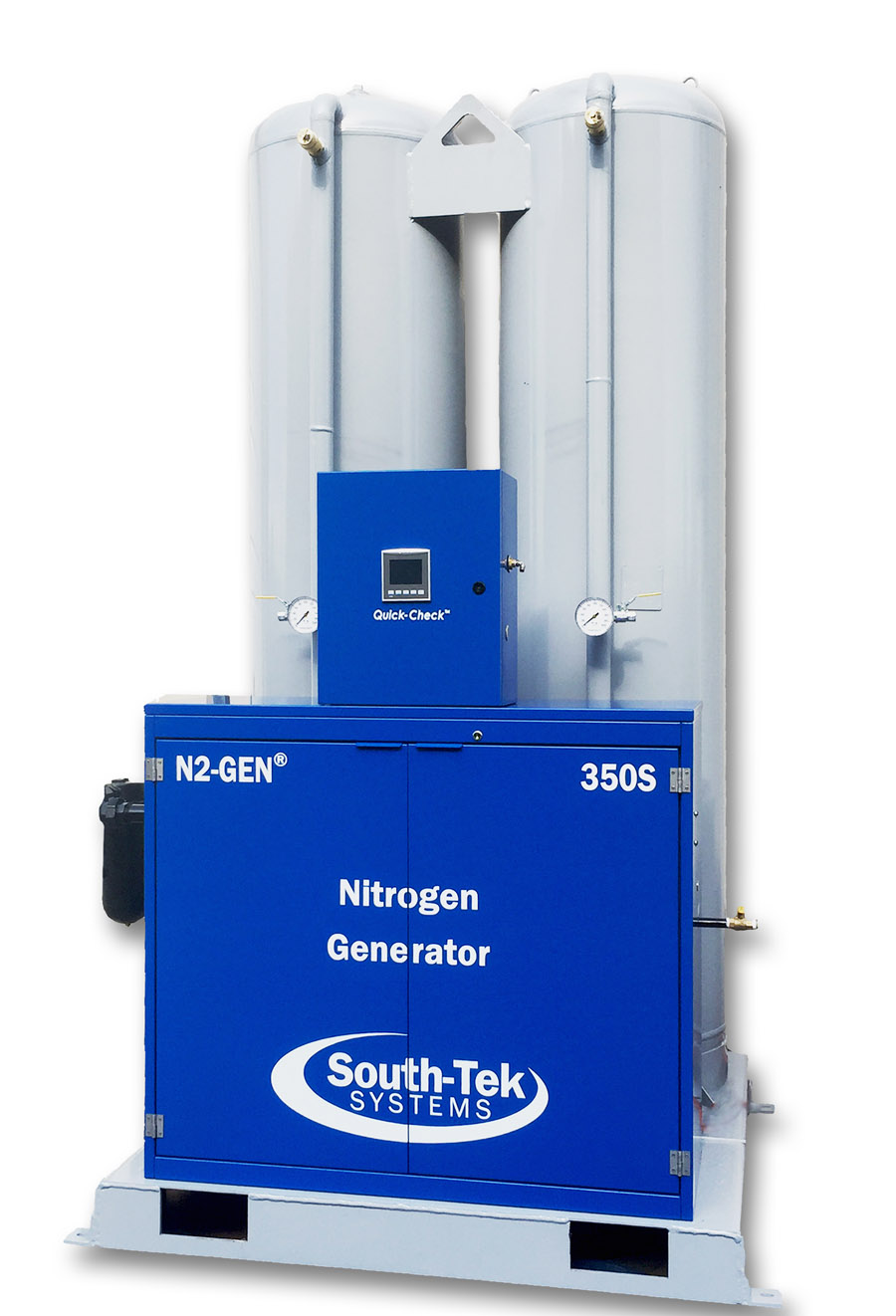 Many nitrogen generators, like this one from SouthTek Systems, are quite compact and can be placed close to the machines; just be sure to size them properly for your shop’s needs.

Like many in the industry, Burns was a newcomer to the world of fiber laser operations. Before purchasing his own machine, however, he’d been subcontracting laser work to others for many years. He knew by then that fiber not only cuts faster than CO2 but offers reduced maintenance costs and substantially lower power consumption.

And while early adopters of fiber laser technology might have griped about poor edge quality compared to CO2, those complaints were a thing of the past by the time Burns joined the fiber fan club. To him, the only toothache was the nagging cost of nitrogen.

“When you consider the benefits of fiber over CO2, I knew it was just a matter of time before the entire industry swings that way,” he says. “Deciding to get into the generator business made a lot of sense at the time, and even though it took nearly three years of research and development, it’s proven to be the right call.” 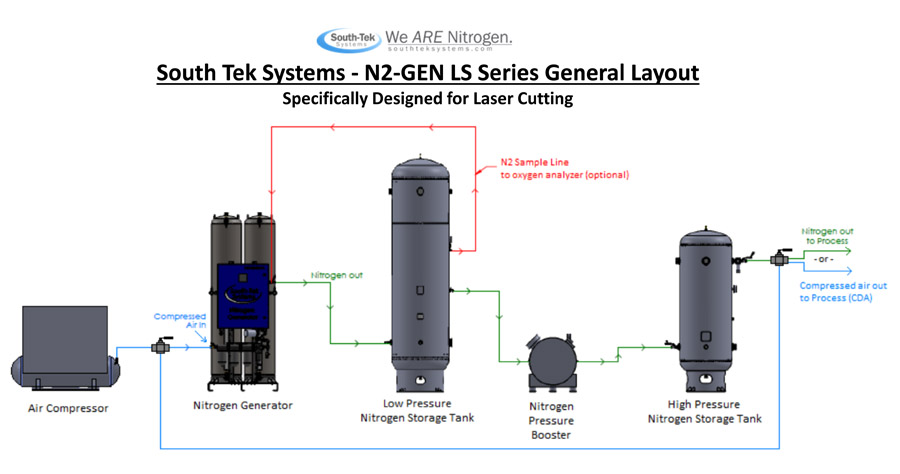 This flow chart from South-Tek Systems shows how compressed air flows into the generator where nitrogen is separated and sent to a low-pressure storage tank. From there, the gas is pressure-boosted before moving on to a secondary, high-pressure tank for use in the laser cutter.

Bill Craig is the director of business development and marketing at IntoN2, the newly formed nitrogen generator division of Burns Machinery. He says the company now offers three sizes of equipment and that installation is simple.

“Plug it in and hook it up to your air compressor and two minutes later you have 500-psi, high-purity nitrogen for about three bucks an hour,” he explains. “Most of our customers see complete ROI in less than two years, and some have seen payback in half that time.”

According to everyone interviewed for this article, those results are typical, making an in-house nitrogen generator a no-brainer for even the smallest fiber laser shop. Yet everyone also agreed that the majority of shops still rely on Dewars or bulk storage tanks for their nitrogen needs or avoid using nitrogen altogether due to its high cost. So why aren’t there more generators out there?

“People are becoming more comfortable with the thought of nitrogen generation,” he says. “For one thing, the technology has changed quite a bit in the last 20 years, especially for us. Today’s systems are more efficient and offer greater longevity, so we’ve seen a lot of growth in food packaging, oil and gas pipe purging, heat treating and now fiber lasers. And when you consider that the gas providers continue to have what has basically been a many-decades-long stranglehold on the market, it only makes sense for companies to purchase their own system.”

Not yet convinced? Consider this: Albrecht estimates that fewer than 10 percent of shops own a nitrogen generator. This means 90 percent of shops are spending roughly $10 per hour more than they should on gas, giving those with in-house generation capability a distinct competitive advantage. Add to that the fact that availability of “free” nitrogen eliminates historical cost concerns while cutting, in turn leading to increased use and, in most cases, greater productivity. 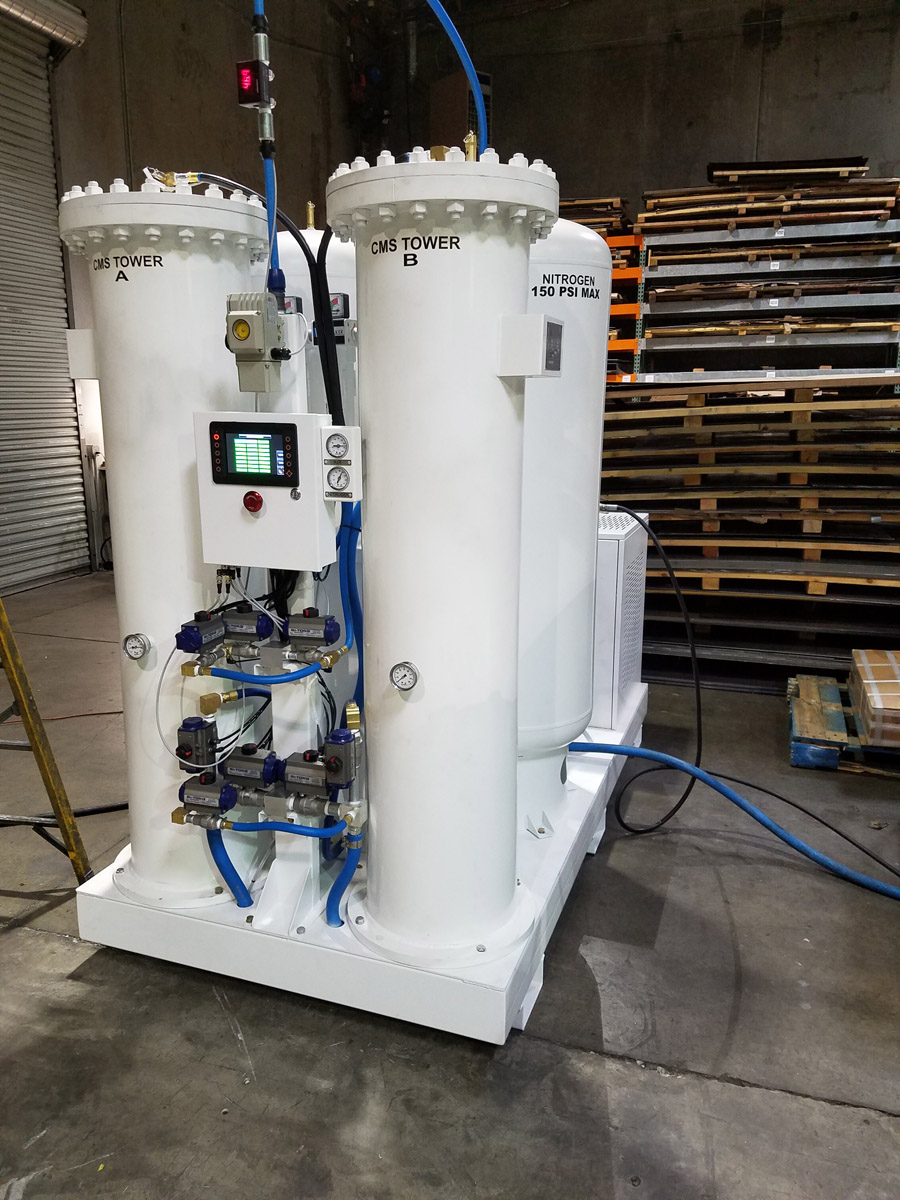 Now that I have your attention, there are a few things you should know before rushing out to buy a nitrogen generator. First, be aware that two types of technology exist:

Albrecht says many people are under the impression that PSA-style generators are “the only way to go” with fiber lasers. But, he also notes that membrane systems deserve consideration.

“We sell both technologies,” he points out. “PSA can provide better purity, higher flow rates and greater pressure, but this comes at a cost. If you’re cutting 16-gauge steel all day and only need 125 psi at the nozzle, you can probably save some money and floor space by going with a membrane generator.” 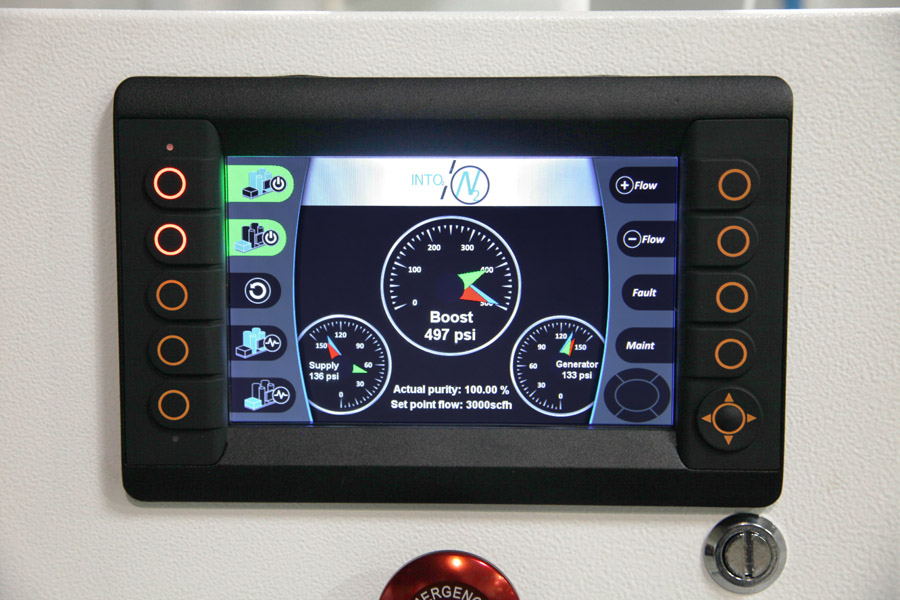 Nitrogen generators, like this one from IntoN2, are simple to install and configure, requiring little to no input from the operator after setup.

The other consideration when shopping for a nitrogen generator is size: Don’t buy more than you need, but don’t shortchange yourself, either. Jordan Messick, industrial sales market manager at South-Tek Systems LLC, a nitrogen-generator manufacturer, says he regularly receives phone calls from potential customers left scratching their heads after receiving a competitor’s quote.

“I worked with a company recently whose operator said he burned through a six pack of cylinders (1,500 cubic ft.) every three hours, so everyone assumed that a generator capable of producing 500 cubic ft. of nitrogen per hour would be good enough,” Messick says. “But no one asked how much of that three hours was actually spent cutting, which turned out to be around 50 percent. If they’d gone ahead with the purchase, they wouldn’t have found out until too late that the system was nowhere near big enough for their needs.”

Messick says this is why it’s important to partner with someone who understands the industry. As mentioned, the uses for nitrogen are far-reaching.

“Laser cutting is vastly different from the many other applications for which nitrogen is used,” he says. “You need to consider the range of materials and thicknesses you’ll be cutting, the type and brand of the machine, the nozzle diameters and gas pressures that will be needed, and whether automation will be used as all of this affects nitrogen requirements. Sizing a system correctly is not only crucial to obtaining a good ROI, but to getting the very best productivity possible from the investment.” 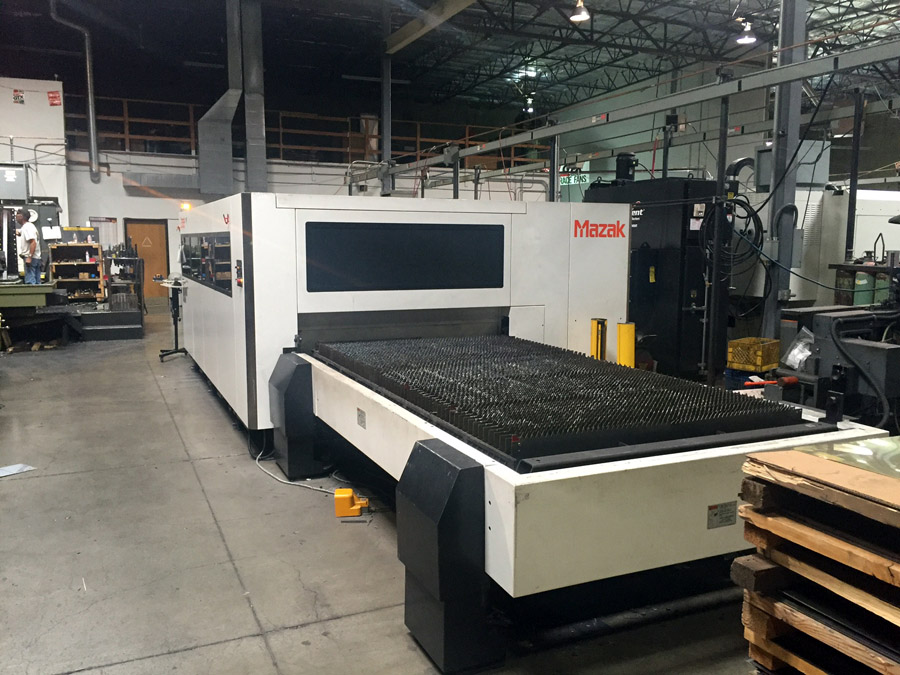 Joe Moretti, president of Industrial Solutions LLC, also a manufacturer of nitrogen generators, has been cutting metal with laser beams since 1984 and bought his own nitrogen generator for use on his shop’s CO2 machines long before the rise of fiber lasers. Moretti’s sons now run his shop – Service Metal Fabricating – and Moretti spends his days talking to people about nitrogen.

“Deciding which gas to use depends a lot on what comes after the cutting is done and on how much power you have available,” he says. “If you have a 500-W laser, for example, it may not ever be appropriate to use nitrogen, but if you have one with 4,000 watts, it may be appropriate to use nitrogen a significant amount of the time no matter what you’re cutting. There are a lot of variables in this.”

Some of those variables include the possible need to use argon when cutting titanium to avoid microscopic edge fractures or using fiber lasers for cutting highly reflective materials like aluminum, brass and copper.

“If you want to drill into concrete, you’d better not buy a drill bit designed for steel,” Moretti says. “Laser cutting is no different. It’s all about using the right tools for the job.” 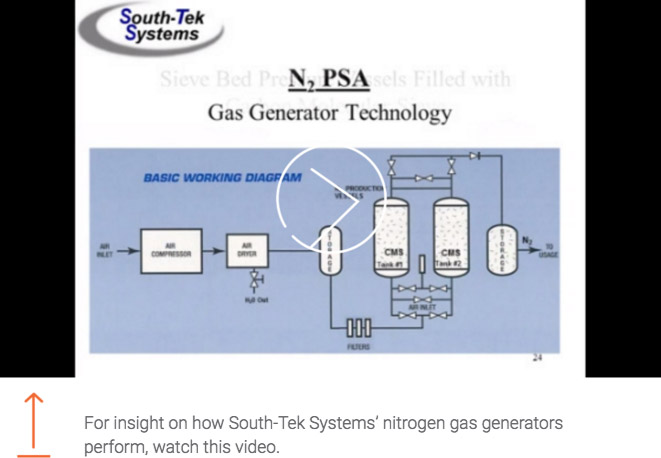 Whatever the case, it’s clear that Moretti he and his peers think nitrogen generators are one of the most important tools in any laser shop. He will be the first to tell you that, if you’re in business for the long run, there’s no reason to waste your cash on bottled gas.

“My experience has been that, for most people, the amount spent on gas every month easily pays for a generator system,” he says. “So the question then becomes: Why would you want to give all that money to the gas people, when you could be sticking it in your pocket?”